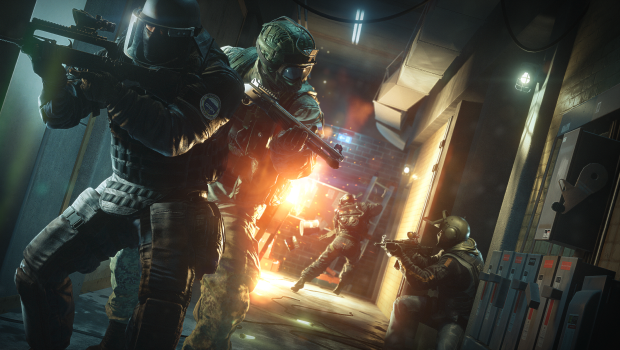 Tactical play is a hallmark of the Rainbow Six series. Although differing in intensity, each entry has tried to put a spin on the methodical operations of various renowned international special forces. Rainbow Six: Siege continues this trend, and though it veers more towards the modern than days of yore, Siege still provides a competitive experience that is unique and entertaining.

Siege is a largely multiplayer affair, as it does away with any campaign options. There are single-player training missions called “Situations,” that act as an introduction to the game proper, and then the two main play modes: the PvE Terrorist Hunt and the competitive PvP mode.

Situations are where the game introduces you to the tools, teams and concepts of gameplay. Part tutorial, part challenge objective, this gives you the closest thing to a story-based single-player game mode. The incentive here is for a newcomer to learn those skills and tools, and to earn some easy renown to unlock characters and weapon customizations.

Maps are laid out like intricate mazes of chokepoints and entrances.

We had two members of our team, Eric and Justin, tackling Siege, and both found themselves drawn to one area over the other. Eric, a competitive try-hard player, delved deep into the PvP modes; Justin, the classical RB6 vet, found himself leaning more towards the Terrorist Hunt game mode. Each has plenty of merit, but it proves that this title is either divisive, or more likely, offers a surprisingly comprehensive Rainbow Six experience.

Terrorist Hunt, a game mode pitting players against AI opponents can be played solo or cooperatively. Experience and renown are easy to get here, and if you aren’t crazy about competitive gameplay this might just be where you want to be. Terrorist Hunt is a throwback from the early days of the series, where Team Rainbow would be tasked with clearing out a chateau, or deal with isolation excursions. The type of game isn’t controlled by you, however, but instead is determined by whatever mode the game decides to toss at you.

On the other hand, you have the competitive multiplayer: five-on-five objective game modes where one team tries to complete an objective and the other tries to prevent them from achieving their goal. Any given match may include reclaiming a biohazard container, defusing a bomb, or exfiltrating a hostage, but there is always the back-and-forth of attack and defense. Teams take turns switching sides, playing to best-of-five for the match win.

You can immediately tell that Ubisoft Montreal wants this to be a competitive, dare I say “e-sports,” title. You play to best-of matches rather than segmented encounters, you play as specialized operators instead of nameless soldiers (with one exception), and there’s always a focus on score tally and stats.

Operators not only determine what weapons you can use, but what special abilities you have to help your team win. You can’t play the same operator as someone else, so teams become intricate compositions of abilities and talents. I became partial to an attack operator code-named IQ, a fast GSG-9 soldier who could use her wristband to detect enemy electronics and destroy them with her pistol. Smoke was my choice on defense, wielding a hefty shotgun and able to set off remote mines filled with toxic gas.

Each operator feels wholly unique and interesting, and the interplay between them makes each match feel fresh. My IQ operator can effectively deal with enemies whose abilities are booby traps and electronic jammers, but in a firefight against someone wielding a riot shield or deployable machine gun, I let others tackle it while I providing support fire.

IQ rewards smart play and speed, but punishes the reckless. I usually aim for the former and fall in the latter.

This interplay extends out to the field, as the terrain and areas are quite malleable to your needs. Defenders can barricade doorways, forcing the attack team to use a breach charge to gain access. Except you don’t have to breach the door — maybe you  breach the ceiling and drop in, or a separate section of wall that the defenders don’t expect you to come through. At first, I was hesitant to poke any holes in my defenses, content to “turtle-up” and wait. But several games later, I would find my foxhole and shoot holes through the wall, so I could see approaching foes in the hallways and light them up through the terrain.

Even in the planning phase, there’s important play happening. The defenders get time to set up their barricades, barbed wire, and cover, but the attack team gets that time to roll around in drones and try to locate the objective and the surrounding area. The defense has to be mindful of this, and people would often call out that they would be on “drone duty,” sitting outside the objective area and destroying drones that came through looking for the hostage. Integrated voice chat was a must for this game, and it works effortlessly, rarely sounding tinny or buzzy and always sitting right above the dim roar of the bullets.

The map pool is varied, ranging from an embassy and airplane to your standard American suburban neighborhood. Each area feels crafted for objective offense and defense, and provides multiple alleyways and routes to the goal. Hallways have dead zones, but you can always hop out of a window, rappel up and then breach through the roof if you don’t want to take the normal approach. The layout of each area was conducive to both sides, and I never felt hindered by terrain, but rather enabled by the clever layout to act out whatever crazy Best Laid Plans I had cooked up for that round.

The notification every time a teammate or enemy dies serves to continually ramp up the tension.

All of these separate turning cogs work terrifically in unison, but the shell they’re contained in is another story. Rainbow Six: Siege is a full-priced game, but many of the models in it are very microtransaction-riddled, reminiscent of free-to-play games more than a $60 release. Operators are not unlocked from the beginning, but rather unlocked through “renown,” a currency you can either earn from matches or through real money purchases. In a game where each team can only have one operator, that means for most of the early levels, you’re stuck trying to grab the one operator you’ve managed to save up for. The other option is playing as the Recruit, a cardboard cutout of a soldier with no abilities and the lowest stats. Value is a tough subject, but it’s never fun to have to play as the bad character on your team simply because you haven’t done enough grinding for Siege’s renown currency.

There’s also a strange sense of gamification around the objectives, especially hostage situations. In the same way that Battlefield: Hardline made me think about the way we fantasize high-octane police drama, Siege made me think about the ways in which we fantasize the situations that happens all too often nowadays: SWAT standoffs, hostage situations, big guns and militarized garb draped in suburban scenery. It’s a little too real at times, and a sad reminder of the state of things, even if it isn’t Ubisoft’s intention to draw up those thoughts. I had a game where a hostage was killed by a stray bullet, and screen popped up with the words “Victory” and a swell of uplifting music, followed by a slo-mo replay of the bullet killing the hostage. It wasn’t a good look for Rainbow Six, and given the events of the day prior, I had to close out of the game for a bit and find something else to do.

Given those shortcomings, the core experience of Rainbow Six: Siege is excellent. Rainbow Six captures a moment perfectly — that moment right before the firefight lights up, the slow tension and careful back-and-forth of teams. The feeling of perfectly executing an assault is unparalleled by any other game on the market, and with the right team of five, this game feels like the five-player co-op/competitive shooter that would make for hours of LAN party fun. It isn’t perfect, but you could do a lot worse looking for a new multiplayer shooter – just maybe look for this when it has more meat on its bones.

Rainbow Six: Siege is one of the better tactical FPS experiences of the year, even with a smaller content offering than most. Microtransactions and limited custom options can muddy it up, but if you enjoy the core gameplay loop, there’s a lot to enjoy here for the multiplayer-minded player.