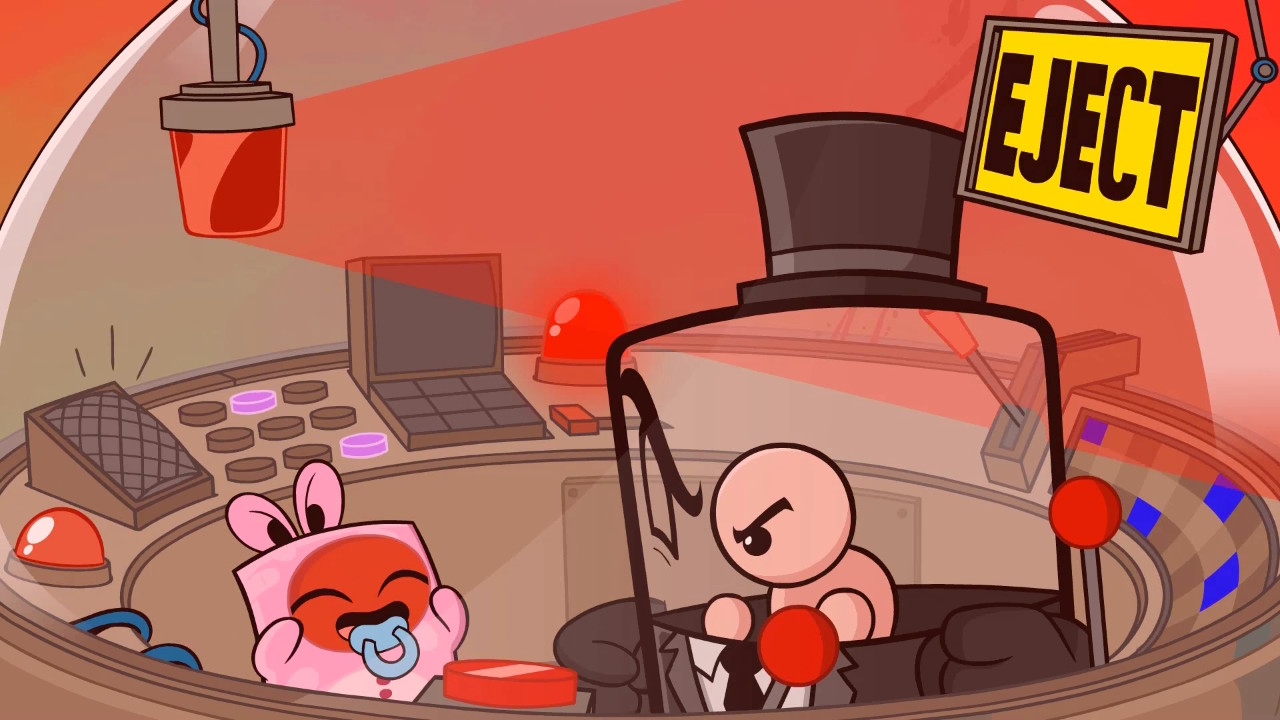 It’s hard to believe the indie game Super Meat Boy has been out for over a decade now. With its emphasis on fast-paced platforming and challenging but fair difficulty, it’s a classic the world over and has been ported to a multitude of consoles and handhelds. There comes a time where every franchise must start anew, and Team Meat (minus some of its influential creators) has finally made Super Meat Boy Forever. In the midst of trying to create something new, it’s lost some of its identity, but still has the same visual charm of the original. 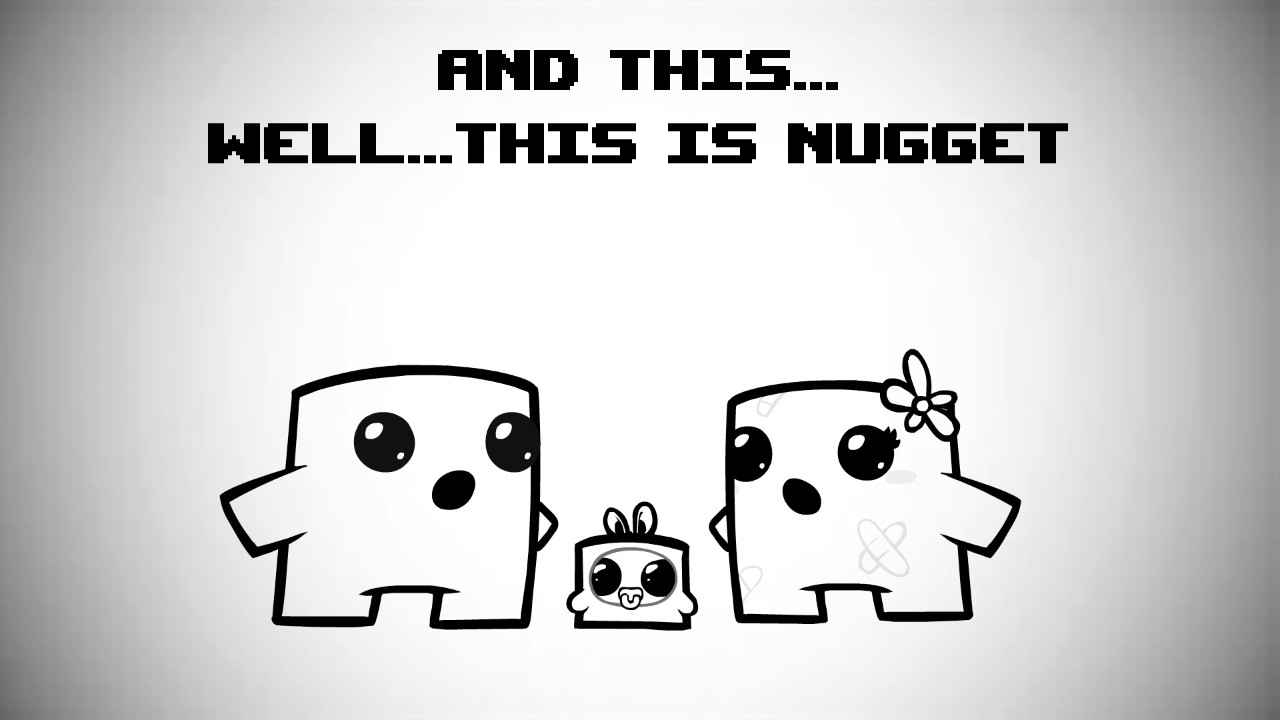 In Super Meat Boy Forever, the titular Meat Boy has settled down with Bandage Girl and their child Nugget. Unfortunately, the nefarious Dr. Fetus didn’t catch the memo and kidnapped Nugget; now, the duo must run through a procedurally-generated gauntlet of auto-scrolling levels in order to save their child and foil the evil doctor’s schemes.

And yeah, if you read “procedurally-generated gauntlet of auto-scrolling levels” and grimaced, you’re not alone. It’s a vast departure from the last game, which turns it from a hard-as-nails platformer to a hard-as-nails auto-runner the likes of the Runner trilogy or Bubsy: Paws on Fire. I’ve got an unpopular opinion that auto-runners aren’t necessarily a bad thing (I did give the Bubsy game a positive review, after all), but I also acknowledge there’s a degree of difficulty that’s suitable in these games.

In Super Meat Boy Forever, you control Meat Boy or Bandage Girl (plus unlockable characters) as you traverse different worlds and defeat bosses that Dr. Fetus places in your way. Here, you automatically move from left to right as you jump, punch, and duck to the end. It’s easier said than done, however, as much like Super Meat Boy, everything is out to kill you. From buzzsaws to ghosts, there’s more than enough enemies and objects here that will grind you to a bloody pulp. The same zany visual aesthetic remains, and while it’s frustrating to die often, it’s still somewhat satisfying to see your character’s guts spill all over the place. Chalk one up for edible character design, I suppose. 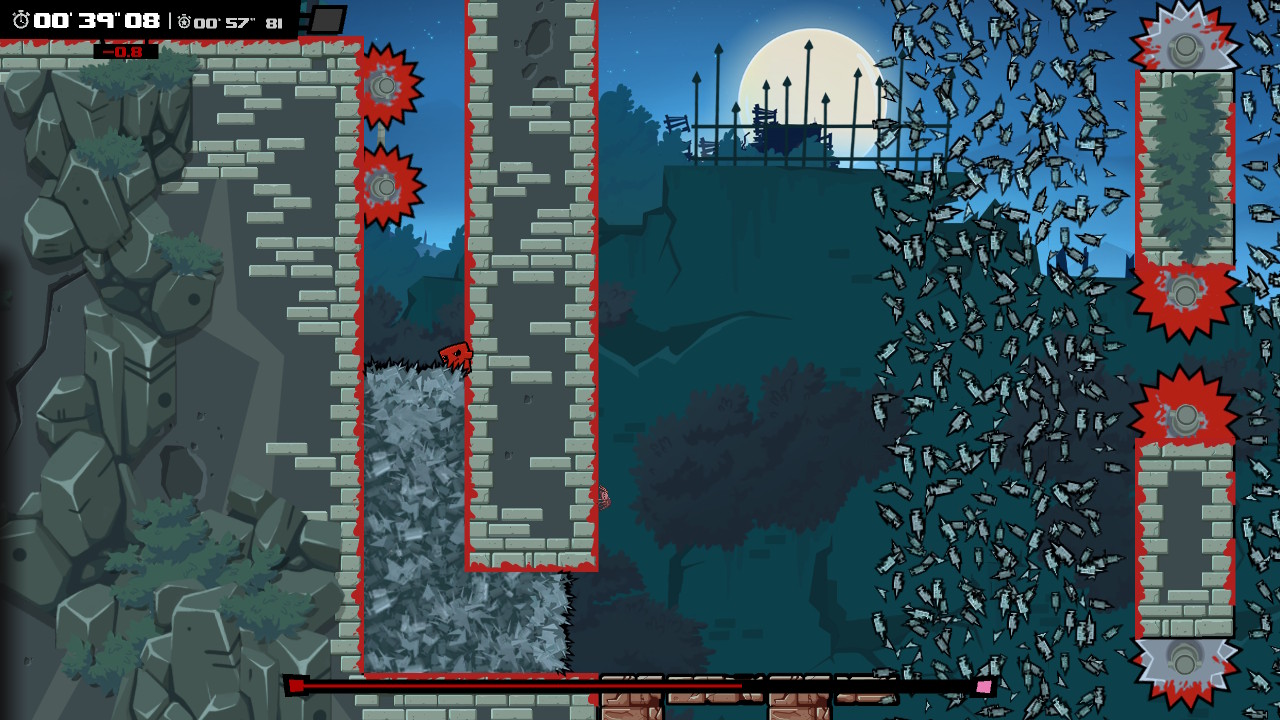 Now, compared to the well-crafted smaller levels of the original, you have slightly longer levels consisting of chunks of procedurally generated bits and pieces. While the worlds have a general theme that must be followed, the level segments are random. You have a timer that you can try to beat in order to get an A+ ranking and tackle a Dark World version of the stage (which is basically a reskinned and harder version). Beating enough levels will unlock the world’s boss, which you must defeat in order to proceed to the next world. 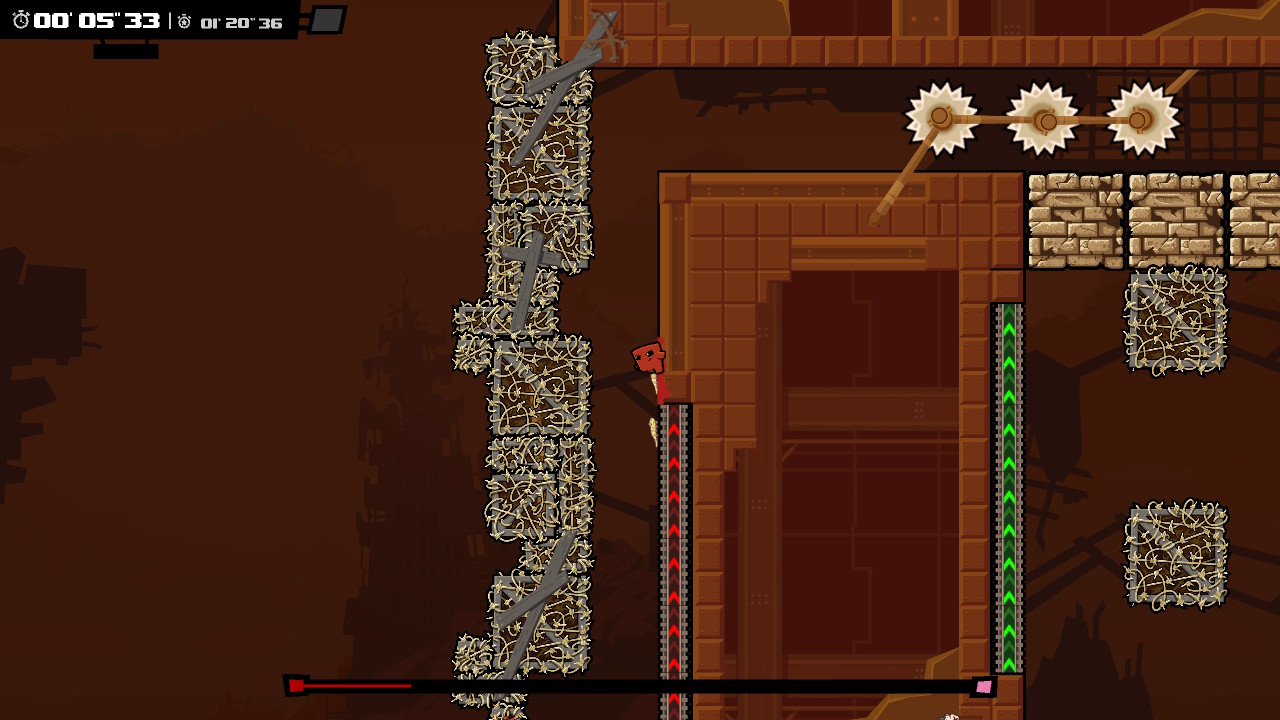 While the procedural generation of stages would theoretically allow for infinite possibilities and different playthroughs, in actuality it becomes an exercise in frustration. Some concepts (like the second world’s inclusion of steel wool that will kill you if you so happen to stay in one place for too long) are interesting in theory, but because of the random nature of stage generation, might have some level chunks that end up being way too annoying to get through. It doesn’t help that this makes the game suffer from inconsistent difficulty spikes, as I was having a tough time in the second world. The next world? It was a breeze. Sure, once you beat the game, you can reroll stage designs to make a “fresh” experience, but I don’t feel excited enough to try again. The average stage length is also longer than a regular Super Meat Boy level, which makes the pacing simultaneously feel too slow for a twitchy platformer and too fast for an auto-runner. 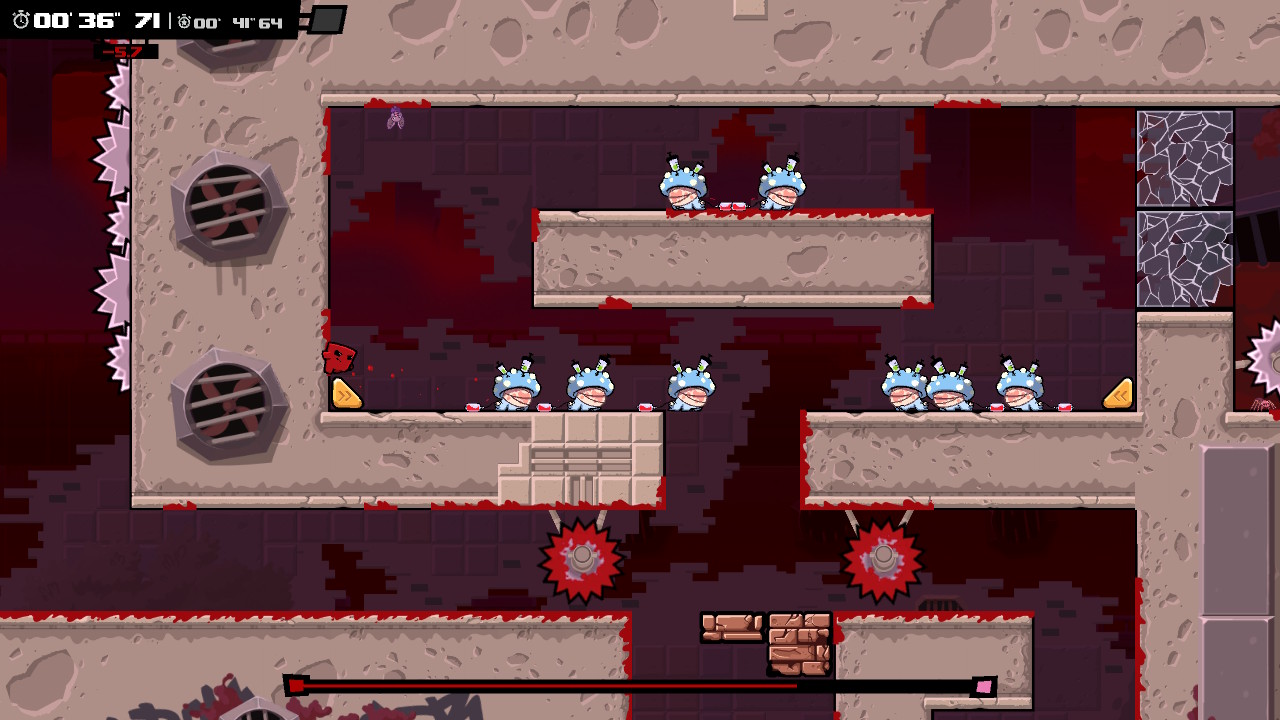 It doesn’t help that the controls are more suited for the first game rather than this one. Meat Boy still feels a bit slippery, which is fine when you have your own agency. With a game that requires you to move at all times? Not so much. It wouldn’t be much of a problem if the game was easier or more forgiving ala the aforementioned Runner 2 or Bubsy: Paws on Fire, but Super Meat Boy finds its identity in the soul-crushing difficulty of the whole thing. Making an easier game would run counter-intuitive to the nature of the series, but at the same time, it can get a little too frustrating for its own good.

Take the timer, for instance. In the original, you can shave off a ton of seconds with quick thinking and abusing the mechanics, but here? You’ll be lucky to do that in the first world because of how rigid the mechanics are. There’s no real way to speed up your character sans an exploit of punching and ducking, which feels more inaccurate when you’re trying to navigate a field of buzzsaws. To make matters worse, the level chunk approach means you can get stuck with an extremely difficult section only to get another one that’s a cakewalk. The inconsistency really puts a hamper on the whole experience. 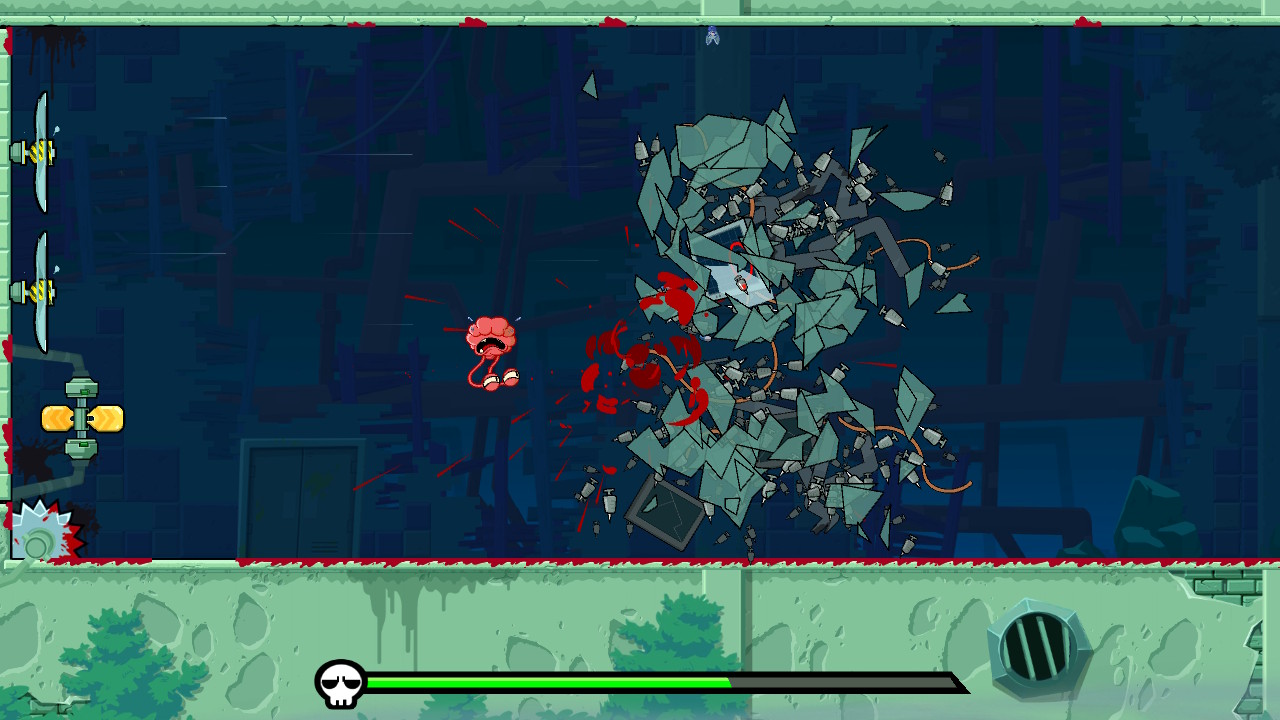 That said, the boss battles here are a highlight. The cutscenes before and after a world as well as during a boss battle are fun and imaginative, and give a glimpse at what could have been. The boss enemies are the only things that aren’t procedurally generated, which means the hand-crafted moments of the first game are back. They were pretty inventive, such as the first boss where you have to punch the arms and legs of Dr. Fetus’ mechanical contraption while avoiding a gauntlet of buzzsaws, and even though I had to die dozens of times to beat these monstrosities, it felt great once I was able to do so. I just wish this game had more of the charm of its visuals and end-of-world bosses, because these were the best part of Super Meat Boy Forever.

Super Meat Boy Forever is a game that suffers from inconsistent difficulty and some counter-intuitive mechanics. While the cutscenes and bosses are charming as always, this is one game that die-hards of the previous installment might want to skip. It’s still a fun time for those willing to overlook its flaws, however.

Elisha Deogracias is an aspiring accountant by day, freelance writer by night. Before writing for Gaming Trend, he had a small gig on the now defunct Examiner. When not being a third wheel with his best friends on dates or yearning for some closure on Pushing Daisies, he's busy catching up on shonen manga and wacky rhythm games. Mains R.O.B. in Smash. Still doesn't know if he's a kid or a squid.
Related Articles: Indies, Super Meat Boy Forever
Share
Tweet
Share
Submit