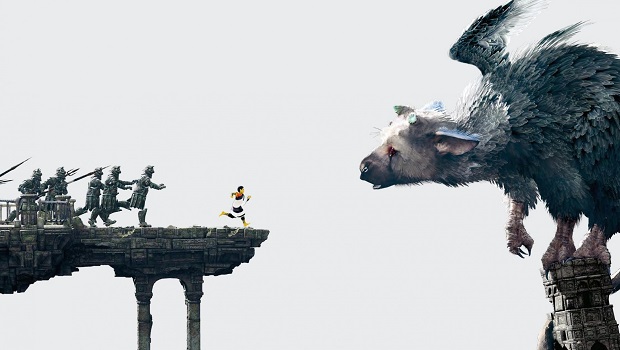 Calling The Last Guardian “a product of its time” may seem like a misnomer, but, considering the game’s troubled development, it isn’t surprising that the long-awaited followup to Shadow of the Colossus feels a bit dated now that it’s finally here in 2016. While this story of a boy and his beast is heartfelt and portrays a beautiful unlikely friendship with poignant restraint, The Last Guardian’s mechanical and technical issues unmask a game that was clearly meant to be released closer to its original unveiling in 2009. In its earliest hours, The Last Guardian’s premise had me spellbound, but as I progressed through the ruined prisons of its world, I found myself in a near constant state of frustration, only to have a temporary reprieve when the game’s narrative took center stage.

The Last Guardian tells the story of a young boy who wakes up to find himself prisoner in the remnants of a long-abandoned castle. Upon regaining consciousness, he meets a massive griffon-like creature named Trico who has been badly hurt and taken prisoner as well. After nursing Trico back to health and releasing him from his shackles, the two begin their journey to escape captivity.

For the most part, The Last Guardian’s minimalistic story is told without words. Instead, the boy and Trico’s relationship evolves from hostility to fierce loyalty through the duo’s cooperation as the game goes on. As the boy, you’ll have to utilize both your own skills and Trico’s in order to progress through the dungeons and puzzles within the ruin. Trico’s large size means he can traverse great distances and essentially acts as the boy’s bodyguard. However, as you’re both navigating through the world, Trico is often unable to get through certain obstacles without your assistance, meaning the boy has to utilize his own talents to help Trico find his way out as well.

At first, playing The Last Guardian is like playing a cooperative game alongside someone with a language barrier. The boy and Trico have to work together, but their communication is limited to sounds and gestures. Because they both have different skills and are only semi-cooperative at the start, Trico will sometimes find a solution to a problem on his own, such as realizing he can make a jump the boy can’t, and that’s the key to progressing.

Initially Trico is smart enough to not meander, making him a helpful contributor rather than an over-sized escort mission, which lasts until the player is given more direct control of Trico through orders. While this shift symbolizes the two’s growing bond, I found that once Trico changed from my cooperative friend to an extension of the boy’s actions, he became more difficult to control.The beast was frequently unresponsive to my orders, turning otherwise simple tasks into aggravating tests of my patience, dragging out sections far beyond what was necessary.

While controlling Trico becomes a problem later on in the game, the boy has his own share of troubles right out of the gate. The boy’s movements are flimsy and slippery, and his propensity to automatically latch onto climbable surfaces and grabbable objects means his already flailing limbs can unexpectedly grasp unwanted objects and ledges as you’re trying to traverse the environment. This is exacerbated by Last Guardian’s disobedient camera, which is fidgety in cramped spaces and constantly moves on its own in an attempt to acknowledge Trico for inexplicable reasons.

These problems only become more apparent as The Last Guardian goes on and its puzzles grow more complex. I often became so irritated by the clunkiness of the boy’s movements and Trico’s insubordination that I wanted to walk away from the game entirely. However, it was The Last Guardian’s heroes who kept me coming back.

The boy and Trico’s relationship is the core that holds together this otherwise crumbling whole. Beyond the two learning to cooperate, the journey on which The Last Guardian takes its two heroes is perilous, and both are in constant need of each other’s care. There are several points when Trico, in recovery after an intense battle, requires help from the boy. Relationship-building tasks like removing spears lodged into his body and exploring the surrounding area for food are necessary in order to continue on your quest. Trico returns the favor by protecting the boy from danger and saving him from fatal falls. The two are separated several times but are always looking for ways back to each other. Watching the two grow from reluctant allies into inseparable partners is the soul that keeps The Last Guardian alive, despite all of its design issues, which at times render the game close to unplayable. Over time, some of these interactions become stale due to repetitive level design, which runs through the whole game, but when The Last Guardian walks off the beaten path of its gameplay loop to delve into the defining moments of this relationship, I always found my investment in these two overpower my frustrations.

Had The Last Guardian come out on PlayStation 3 as originally intended, it may have been easier to forgive technical shortcomings for the wonderful story it tells. But now the game’s problems make it feel decidedly old, as if it began to take shape in a different time only to emerge on PlayStation 4, where its ideas aren’t as novel and its clunkiness is harder to ignore.

The Last Guardian’s story is moving and beautifully told, but the poor execution of its dated mechanics hold it back from the greatness of its predecessors.