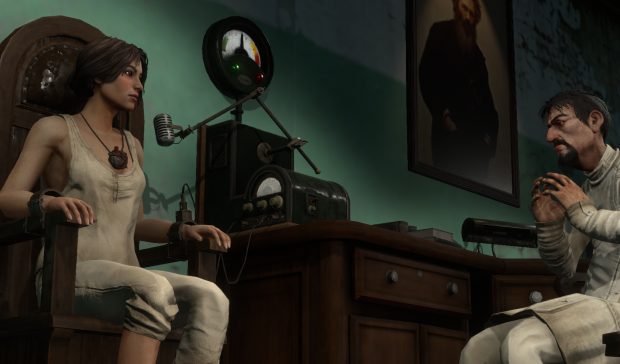 I really tried with Syberia 3. I was excited to come back to the world of Kate Walker, enjoy more of Benoit Sokal’s writing style, and see it all updated for a new generation of gamers to enjoy. I’ve spent the last week trying my damnedest to figure out how to reconnect with Kate or Sokal’s world, but like the snow ostrich migrations that make up the central plot point of Syberia 3 – it feels entirely frozen and altogether stalled.

Syberia 3 starts with “Kate, Kate Walker” (so many people refer to her by her full name repeatedly, and some of them repeat her name or portions of it) having somehow ended up in a snowdrift, waiting for death. Rescued, she awakens in some sort of bizarre and frankly filthy clinic next to a diminutive member of the Youkol tribe — the Innuit-like group responsible for helping facilitate the migration of the snow ostriches.

If you are lost, you aren’t alone. Syberia 3 needs a recap video or some way to bring you up to speed as it’s been 13 years since Syberia II, and even longer since the first. The game just assumes you remember everything about Kate, her adventures, and the motivation for the entire series. Even a central plot object, a keepsake from a character in the second game named Oscar, is all but brushed off without explanation. It’s hard to connect when you have little idea of what’s going on or why.

The characters in Syberia 3 are frankly bizarre. From the neglectful doctor and overbearing nurse to the trope mastermind with the eyepatch, these have to be the worst Saturday Morning Cartoon-level villians I’ve seen in a very long time. If we are meant to dislike these characters, it shouldn’t be this unintentionally funny.

What makes it worse is the voice acting. Stiff and uninspired, it’s coupled with lip syncing so far off the mark that it seems to be connected to another language. Beyond that, the age of the voice actors show through their performances, giving young voices to old people and visa versa. Holding the right trigger during conversations can sometimes allow you to hear Kate’s thoughts, but they are often manic and swing the pendulum wildly from severe overreaction to head-scratching underreaction. (When a demonstrably evil doctor holding a giant steel needle asks to take her blood pressure, you’d imagine Kate would be far less cooperative, for instance) It’s all very bizarre, and in all the wrong ways. Unfortunately, a bug has characters frequently talking over one another, so it’s occasionally hard to keep up.

One of the many generic villians

Conversations in Syberia 3 involves pressing one of four face buttons on your controller. The characters in the conversation often have zero patience for you to read through them, berating you for not answering more quickly. When you do pick a response, Kate will rattle off something approximating what was in the written text. In a Telltale-like fashion, the other characters will like you more or less, believe you more often, or any number of other dispositions. Unfortunately, I never saw it make any difference whatsoever.

The plot devices of any puzzle-based adventure game are often contrived to justify the existence of said puzzles. In Syberia 3, it’s a little difficult to connect the two as they are often diametrically opposed. For instance, for anyone to leave the evil hospital, they’ll have to (I’m not kidding) solve the puzzle of getting a bizarre key to allow them to use the elevator. Naturally, the evil doctor simply hands Kate the key. The squid-shaped key has several different ‘tentacles’ on it that have to be moved into position, but only then do you discover that you are missing a pin that holds it all together. Now, anything resembling a stick, Kate’s finger, a pencil, or any number of objects would work, but instead you have to make your way back to the little Youkol amputee you are roomed with (who appears to be happily strapped to a contraption out of the Saw franchise) who will tell you that you can send a flyer (that you’ve discovered in the naturally-unlocked desk drawer of Dr. Evil) to his tribe, whereby their smiths will simply make the part she needs. You’ll try to attract the owl to facilitate this, but that’s not possible until you talk to your short little friend for a second time. It makes the gameplay devolve into figuring out what all of the objects are, and then touching or talking to each one until you stumble onto the right thing. Trial and error isn’t the best puzzle motivator, and it wears thin quickly.

The first two Syberia games were 2D affairs. With a shift to the Unity Engine, the team has taken Kate and her adventures into full 3D. The game opens with a suggestion to use a controller, which is normally fine for adventure games. Syberia 3 is the first game that I felt like I needed a mouse, keyboard, and controller in order to be effective. Kate’s mannequin-like shambling is best handled with control sticks, but as she doesn’t turn her head to look at objects, you are often trying to figure out what you need to interact with in the environment. That’s where the mouse comes in. Using a mouse, you can quickly sweep over the environment to find interactive objects, easily locating where you might need to turn your attention next. After you do so, you’ll switch back to the controller and totter over there — if you can get the camera to cooperate. It’s as equally unruly as the control scheme, alternating between barely mobile, static, and obtuse. I can’t count the times that I missed something critical because the camera wouldn’t move into position.

When you get to whatever object you need to interact with, a broken door release button in your room being the first example, you’ll have to roll the stick in some direction or other to take action against the object. Rolling, spinning, pushing, pulling, and clicking, you’ll eventually discover what arcane spell-casting-esque movement is required…or you’ll switch back to the mouse where it may or may not become intuitive. It’s a frustrating roll of the dice to do something as simple as connect a broken wire to the obvious terminal. I’m not sure why it couldn’t simply be dragged to its destination.

Kate submits to a test for…reasons?

I know I’ve been pretty down on Syberia 3, but there is one aspect where it almost rises to the level of its predecessors — visual intent. I say intent as there are a lot of bugs and broken seams here, but the art style is adequate, matching the first two games, but pushing it into 3D. The landscape, the snow, the backgrounds, and the obtuse characters are visually interesting (minus that lip synch work – eesh), and Inon Zur’s music occasionally captures these moments. It’s just disappointing that the immersion is broken so quickly by everything else.

Syberia was a series built around amazing puzzles and unique storytelling. Syberia 3 was an opportunity to bring all of that to a new generation. Unfortunately, it has remained mired in the pixel-hunting past, riddled with bugs, obtuse controls, and an uninspired storyline coupled with head-scratching voice work. I wanted to enjoy Syberia 3, but too many issues may leave this series stuck in the frozen snow.

Ron Burke is the Editor in Chief for Gaming Trend. Currently living in Fort Worth, Texas, Ron is an old-school gamer who enjoys CRPGs, action/adventure, platformers, music games, and has recently gotten into tabletop gaming. Ron is also a fourth degree black belt, with a Master's rank in Matsumura Seito Shōrin-ryū, Moo Duk Kwan Tang Soo Do, Universal Tang Soo Do Alliance, and International Tang Soo Do Federation. He also holds ranks in several other styles in his search to be a well-rounded fighter. Ron has been married to Gaming Trend Editor, Laura Burke, for 21 years. They have three dogs - Pazuzu (Irish Terrier), Atë, and Calliope (both Australian Kelpie/Pit Bull mixes).
Related Articles: Syberia 3
Share
Tweet
Share
Submit