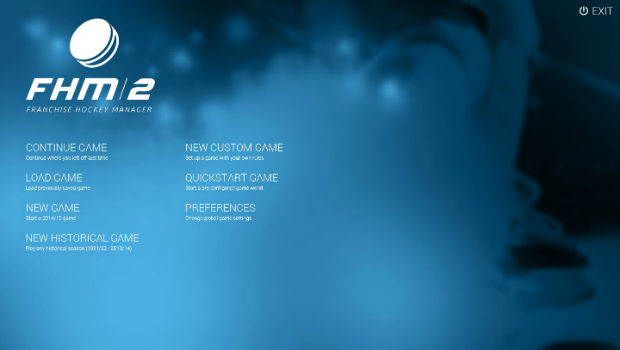 Improve and become great; is that not the edict of all great sports teams, leagues, and the individual players therein? Unlike many other game types, sports games share a cyclical refreshment each year, and, as such, sports titles are always expected to build on the material they have and become better. Perfect your craft over years and you become the MLB: The Show franchise, but have one terrible outing in a demo and you’re laying in the graveyard with NBA Live.

Simulation sports doesn’t change, so if you’ve played a simulator for a sport before you basically know what you’re getting into for FHM2. For those unacquainted, FHM2 places you in the spot of general manager and coach, and it is your job to manage and succeed with a hockey team using the full litany of information available to a general manager. Sans the action of a typical sports title, FHM2 instead focuses on the analytical and the decisions and how they can affect the overall outcome.

The simulations that play out have a reliability to them that you’d expect with an Out of the Park Developments title, and the game challenges your decision making skills at every turn. Smart decisions can keep you chirping, but small mistakes with team planning, finances, or depth can compound from bad into terrible, leaving you fired and alone.

FHM2 has the names and locations of real world teams in-game, as well as the players across many leagues in North America, Europe, Russia, and elsewhere. There are no real-world logos available in the game, but a large community of players on the Out of the Park Development forums have worked to provide templates, logo packs, and custom setups for you to easily download and install. Customization is often the name of the game with a sports simulator, and FHM2 makes it very easy to use others’ creations or to create your own.

The game has improved in a litany of ways, but none more than in the navigation and layout phases of the game. FHM2 is beautifully designed with an eye towards fluid window and tab navigation. Nothing is hard to find or difficult to manage, and basically everything is a link to something, meaning you can get back to the team or the league pages very quickly. The options and overall menu design are very reminiscent of the Out of the Park Baseball franchise that is a “big brother” to FHM2, and this taking of cues from the better product is a great improvement over the generally raw design of the first.

The least important part of a simulator game is always the game itself, but the first Franchise Hockey Manager had a very ugly and non-compelling display of the games themselves that served as a huge negative. FHM2 has completely flipped this on its head. The display is clean and clear, with the players being subbed in and out fluidly. There is a very simple display of an arena that looks pretty nice and gives a visual representation of the action on the ice. Nothing special is done here, but the simple design is more than enough for a game like this.

Setting lines, managing lineups, and wading through free agency is a very deep process that is admittedly not simple, but Franchise Hockey Manager 2 does its very best to keep things clear and easy to read and compare.  Player stats are simple but more than enough to represent a player’s abilities, and these functions work seamlessly together.

Franchise Hockey Manager 2 is a wonderful entry for hockey into the world of sports simulation, and is of the highest quality in terms of design, layout, navigation, and accuracy. Nothing particularly special to look at when compared to other “action” sports titles, Franchise Hockey Manager is for hardcore hockey fans who are more interested in Euroleague transfer rules than on-the-ice action.

Patrick Rost has been with Gaming Trend since 2013. At first focused on sports coverage, Patrick has gone on to cover a wide range of games and other products for the website. Outside of Gaming Trend, Patrick writes and records music, grinds perpetually in Elder Scrolls Online (PS4), and lives day to day with his two dogs, Bob and Stella.
Related Articles: Franchise Hockey Manager 2
Share
Tweet
Share
Submit