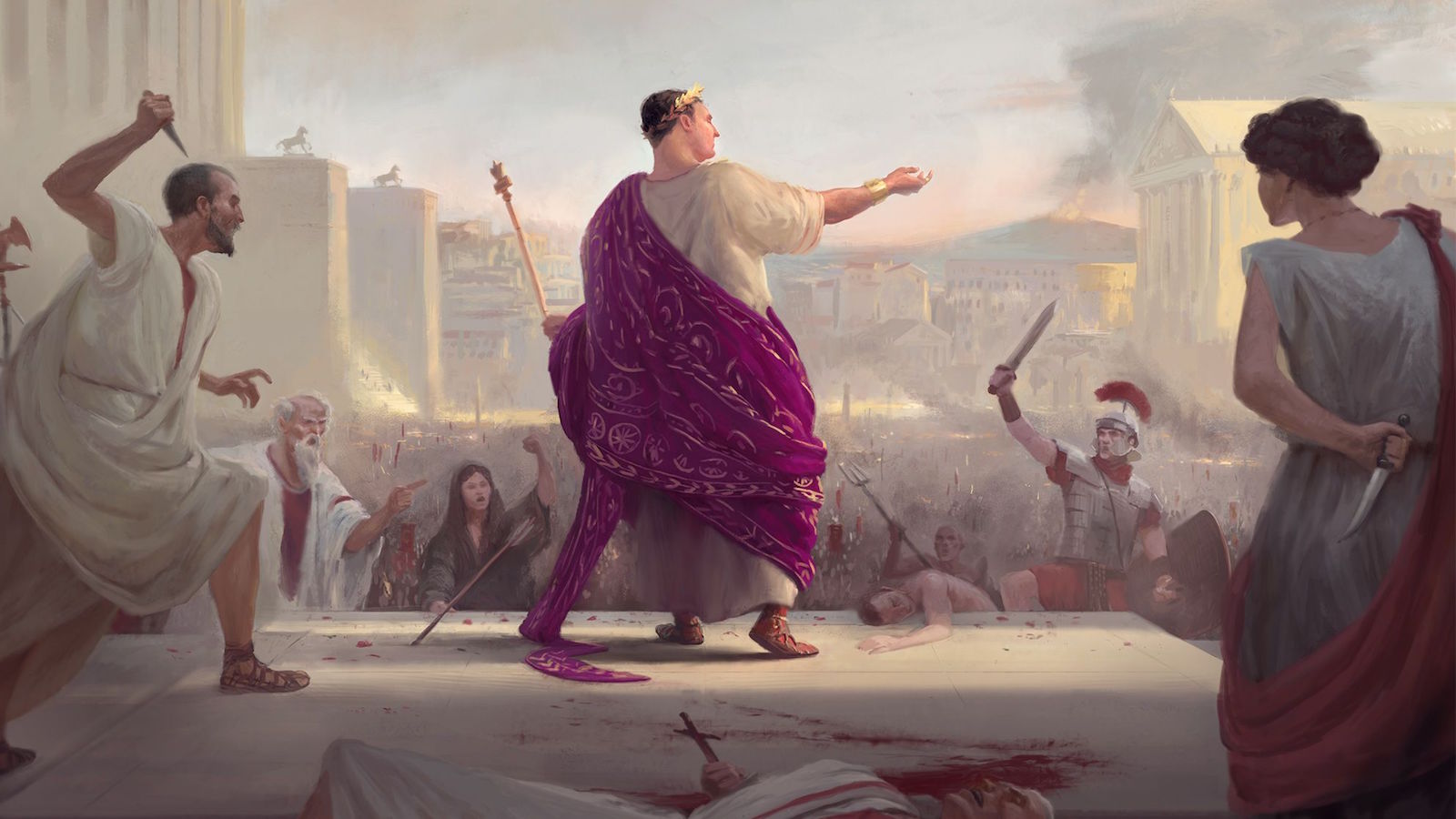 History has taught us that even the mightiest empires eventually suffer a decline, and for the Romans, it can be argued that slide began in the late 2nd century. The once mighty empire was beginning to suffer from the hordes of invaders surrounding it and from the corruption and deceit within Rome itself. Donning the Purple uses this turbulent period as its backdrop in a one to three player game that’s currently on Kickstarter until March 22.

A one-player game puts you in the role of the Emperor. A second player adds in an heir to the throne, while a third player adds the leader of the Senate. A two or three player game is virtually identical, and a solo contest will put you against the game’s auto mechanics. You’ll be following the same premise regardless of your player count, and it’s nice that the game loses little flavor when playing it solo.

You begin in Rome with a pawn that represents your family and a detachment of legions. There will be some other legions scattered around the empire at provincial capitals. The game is played over four rounds with each separated into eight phases. The dire nature of the theme is evident right away as you are barraged with enemies and turmoil before you can even make your first move.

The map board is divided into regions and a turn begins with a die roll to determine where a horde of enemies will appear in each region. Once they appear, they immediately march one province closer to your provincial capitals. At first, this isn’t devastating as enemies cannot defeat your legions until they outnumber them. However, as subsequent events and enemy appearances occur, your legions will be quickly overrun unless you do something to strengthen them.

You will need to deal with the threats against Rome right from the onset of the game.

After armies have moved, the grain for the sprawling population is harvested. Another die is rolled, and one region immediately is struck with famine. Those regions produce no grain on this turn nor do any provinces where enemies control the farms within the region. The bad news isn’t over because the Emperor will draw five event cards and perform them in drawn order. There are a few beneficial events, but most range from worrisome to downright catastrophic. You’ll often find you won’t have enough grain to feed your populace. After all this done, you are finally ready to begin your turn and may very well be looking at a board teeming with issues.

Now I do generally abhor games that are difficult because the game is deliberately against you, and it’s true you will be constantly bombarded with issues in Donning the Purple. Yet, the game does a brilliant job of giving you options to cope with the turbulence. Yes, the game is hard, but it never feels like you can’t do anything about it. Decision making often trumps luck.

When the player action sequence finally begins, it will start with the Emperor. They, like everyone else, have a number of options to choose from, but the leader also has a few that are unique to their position.

Every turn you’ll be aiming to strike a balance between preserving the empire and gaining victory points for yourself. The same is semi-cooperative in a sense that everyone can lose if you are overrun by enemies. You need the Emperor to be somewhat successful if for no other reason but to ensure that you have somewhat of empire left to control should you gain the throne. Still, the Emperor has an advantage in collecting victory points, so you don’t want them to be too successful. While you can obtain victory points through constructing monuments, amassing wealth, or being the lead senator, only the current Emperor can generate victory points from the empire’s happiness at the end of each turn.

Every player in the game has a finite amount of stamina that serves as the game’s action point allowance. Stamina must be spent to perform nearly every action in the game, but it is also used as the life meter for the head of your family. Run out of stamina, and the head of the family dies. You are not out of the game since your stamina resets, but you do lose a victory point. More importantly, if you were Emperor you lose that title unless your family had an heir in place. Stamina is difficult to replace and managing it becomes a key part of the game. It’s an interesting mechanic to show how the stress of the job can wear you down.

On your turn, you’ll be able to construct buildings. Monuments provide bonuses to your pawn’s army strength and die modifiers to combat or assassination attempts in addition to the victory points that can be earned at the game’s end. Monuments are the lone permanent buildings in the game. Others can be destroyed by roving armies, such as the estate, which generates extra income each turn. Only Emperors can build aqueducts as well, which can prevent famine in a region.

You can protect your empire and its buildings by moving your pawns around to engage the enemies. Pawns move swiftly and allow you to achieve glory through victorious attacks. Battles themselves are bland with the strongest army taking a winner take all approach. However, you will need to battle as glory will be an important part of your strategy. You get to roll a glory die for each enemy defeated in battle. Usually this adds more coin to your coffers, but you can also gain stamina or plot cards.

You’ll begin the game with one of these plot cards (two if you are the Emperor). Plot cards can have multiple uses. They have a one-off event that can provide you with a bonus or be used to damage someone else. They also have an inherent strength value in the bottom right corner. You can add plot cards to battles or assassination attempts to help ensure victory. Plot cards are also difficult to come by, so you’ll want to use them carefully.

In addition to building aqueducts, the Emperor can also raise and move legions to protect Roman lands. They can also name an heir. This is a pricey maneuver, but worthwhile if you can keep their title within your family upon your imminent death.

Stamina management is important to both your actions each turn and your family leader’s survival.

That’s because if the lack of stamina doesn’t kill you, assassination attempts surely will. Other players can plot to kill the Emperor by paying coins and rolling a die. The result is the amount of stamina removed from the Emperor. Plot cards can be used by other the assassin and the victim in an effort to either maximize or minimize the damage. Again, the game really does a good job of balancing your desire to see the Emperor succeed while deciding when the time is right to overthrow them. After all, you don’t want to take over an empire on its knees, do you?

If all this wasn’t enough intrigue, you are also dealt a hidden agenda card at the start of the game. It can both grant or take away victory points at the end of the game depending on whether you meet or fail at reaching certain objectives. Hidden agendas are nothing new to gaming, but they do fit well with the theme here.

Strategically, actions are a precious commodity, as the Emperor gets three while others get just two, but there are several actions that may be copied by other players during your turn. This allows you to get more things done every turn, and it’s a nice balancing mechanic for the last player.

Whoever draws the Emperor card does have a slight advantage in the game. The Emperor will most likely survive the initial round to earn some bonus victory points. They may even be in a position to choose an heir in the next round since heirs can die in events. Going first allows the Emperor to build first, which is important as only the first four buildings placed on the track get built in that turn. This is offset by allowing the other players to copy the Emperor’s actions. Since the Emperor will have other things to worry about, it gives players some freedom of choice when their turn does come up. I still think there is a slight advantage to the starting Emperor, but you could remedy that by playing the game again and switching up starting roles.

Luckily, this is an immensely replayable title. With just four rounds, the game can be played in a little over an hour. This may be indicative of its simpler level of strategy, but it shouldn’t be. There’s plenty to do in that hour, and even when it’s not your turn you’ll need to stay cognizant of opportunities to copy actions.

For a Kickstarter price of about $50, Donning the Purple has a lot going for it. The solo experience is more than just shooting for a high score, as you’ll still get to enjoy the game’s mechanics while keeping ahead of an automatic scoring system. At two or three players, the game loses nothing to scale. In many ways, this feels like a lighter version of one of GMT Games’ COIN series games, though here everyone is slightly committed to a central cause while keeping a keen eye on their own goals. The balance between cooperation and competition makes for an entertaining experience.

MSRP: About $50 on Kickstarter

Donning of the Purple is a semi-cooperative game where you’ll do all you can to keep Roman afloat just enough to maintain your own survival while not letting it thrive too much outside of your leadership. You’ll sway between fighting off the barbarian hordes set on destroying the empire while constructing buildings and positioning yourself politically. For a lighter strategy game, there’s a lot to do and it's all done in about an hour. Even with some slight Emperor advantages, the game has some robust replay value.