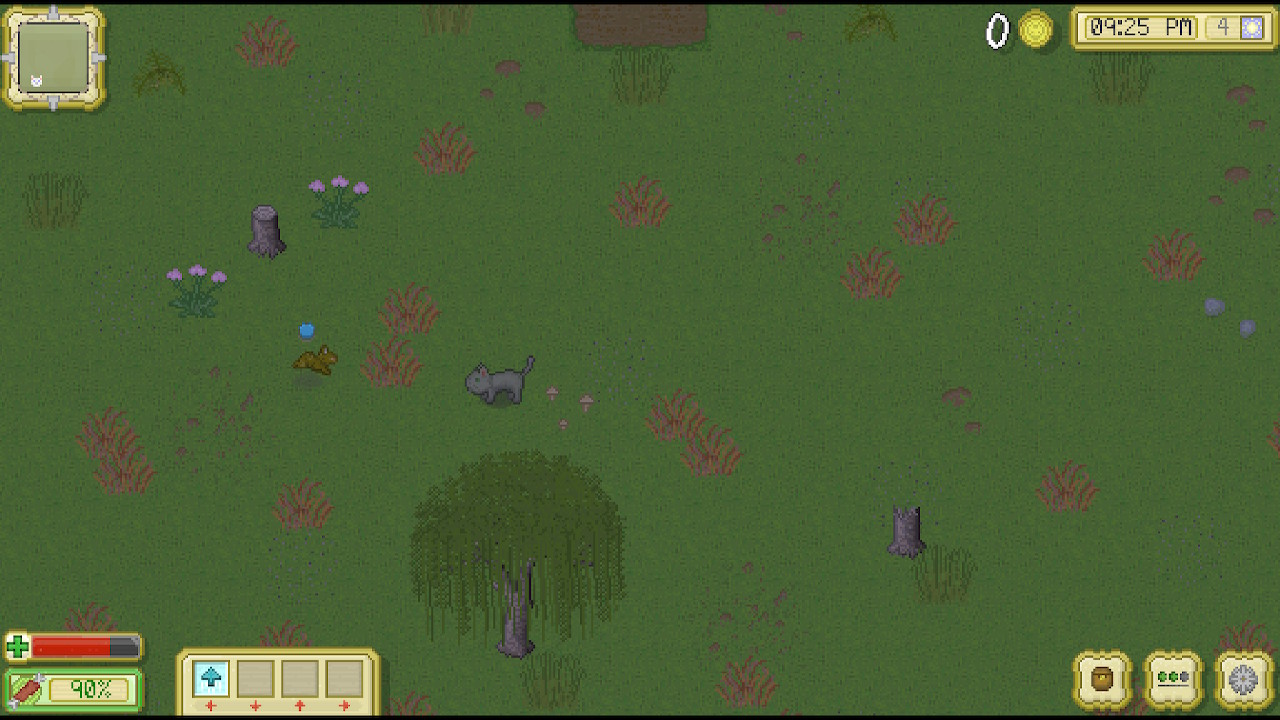 Picture this: a cat living a wonderful life with a human family of its own. The family goes for a drive with their pet, stopping at the side of the road near a forest. They all get out, but when they get in to leave, the cat is left outside. The family drives away, abandoning the cat to fend for itself in the wild. The cat realizes that it has been left alone on purpose, and begins to wander in hopes of finding a new life. This is how Cattails starts.

After being abandoned, a mysterious cat named Coco soon appears. Coco inquires about your situation and explains that the same thing once happened to them. This prompts you to name yourself, choose your fur color, and decide your eye color. I personally went for gray with green eyes because that felt perfect to me. After this short introduction, Coco teaches you how to move, forage, and hunt. The fact that this comes off as a friendly cat showing you how to survive your new situation makes it feel less like a tutorial and more realistic. The last part of this introductory section is choosing which colony you want to join. You can join the Forest Colony, Mountain Domain, or Mystic Colony. I opted for the Mystic Colony because it sounded more unique and it caught my attention.

Arriving at the colony of your choice, you are given a den of your own to live in. The den is where you save the game and where you sleep in order to pass the time. Sleeping also gives you five experience points and heals you a decent amount. In order to get those bonuses, a lot of time must have passed before you last slept. This is to prevent players from spamming sleeping in order to rack up experience without doing anything. There are plenty of other opportunities to earn experience, so trying to scam your way through isn’t necessary. The experience is used to upgrade passive skills such as hunting, foraging, swimming, and fighting, or to purchase active skills such as heal allies, mortal wound, or warp home.

In the world of Cattails, you’ll need to hunt and forage for food in order to survive. On the bottom left are a health bar and a hunger percentage. Eating food will raise that percentage towards 100, with different things filling your stomach more than others. If your hunger gets too low, your movement speed will drop, and if you hit zero, you’ll start to starve and take damage. As for your health, you can refill that bar by sleeping (as mentioned above) or using some of the healing herbs you can find in the world.

Throughout the world, you’ll find a variety of bushes and stalks containing things such as marigold, licorice root, blackberries, catnip, and much more. Depending on the season (spring, summer, autumn, or winter), you’ll be able to find and collect different items. For example, winter blueberries only grow in winter, while licorice root only grows in the spring. The same thing can be said for some of the animals that you find while out hunting. For the most part, different variations of squirrels, frogs, mice, and birds will show up all year round, but there are some special appearances. For example, blue ladybugs only show up in spring, while mackerel appear every season except for winter, since the water freezes over. In order to capture your prey, you need to sneak by holding down ZL. A little grey circle appears above their head and slowly fills to blue. Once it fills completely, press ZR to pounce. If you succeed, you can pick up your dead prey for later, but if you miss, they’ll run away.

The world is split up into a grid of various biomes, including forests, plains, wetlands, mountains, and a beach. Each of the colonies control a large chunk of land surrounding their base, with their level of influence decreasing as you get farther away from the village. There will be occasional skirmishes on borders where you can intervene and help fight off cats from opposing colonies. Defeating enemy cats nets you experience and sometimes money that you can use at the shop in each colony. In order to shop in a colony besides your own, you need to offer enough gifts to that colony to get your reputation with them up to 50% or more. Different gifts boost your reputation differently than others, and you can only give three gifts per day. It takes some time to build that trust, but it is more than worth it.

There’s more to hunting and foraging than just eating, you’ll also need to do both in order to complete the main story. Not long after moving into your den, Coco shows up and takes you to a hidden room underneath the Sacred Temple. He explains that there was once a Forest Guardian that watched over the colonies, but they disappeared suddenly one day. He was trying to figure out how to bring them back, believing that the six pillars in that room were the key. After you get near one of the pillars, it glows and reveals a small group of items that you must collect and bring to the pillar. Once you’ve completed this, you are directed to a certain location that holds a gem that must be brought back to said pillar. Activating the first pillar causes the rest to glow and reveal their quest items. At this point, you can work on any of the pillars that you want, in any order at any time. This was incredibly helpful, as I was able to gather every item that was available during a specific season as quickly as possible before moving onto the next season. I ended up completing several pillars back to back because of this.

Another interesting aspect is that you can date other cats. Each cat has five stars that represent how they feel about you, but they all start with two lit up at the beginning of the game. Talking to them and giving them gifts slowly increases the number of stars. Once you think you’re ready, you can bring them a special red rose to signify that you are interested in them. If you’ve gotten them to like you enough, then they may accept your proposal and you will start dating. Farther down the line, you can have kittens together, which will grow up and continue the story of Cattails. This fits the cutesy, cheerful tone that the game promotes so well. The story, characters, and gameplay all revolve around being approachable and simplistic, which works very well for the game. In the end, Cattails is a fun little game that can be picked up and played at any time.

Cattails is a cute, light-hearted RPG that revolves around hunting, foraging, and trying to restore the Forest Guardian. The gameplay is easy to pick up and play at any time, but can become a bit monotonous after awhile. The game isn't very exciting, and is meant more for relaxing gaming.

Codi loves to play video games and watch movies. He will watch almost any kind of movie just to experience them. His ideas take inspiration from the shows and movies he watches, and games he plays. He also loves a good pun.
Related Articles: Cattails
Share
Tweet
Share
Submit