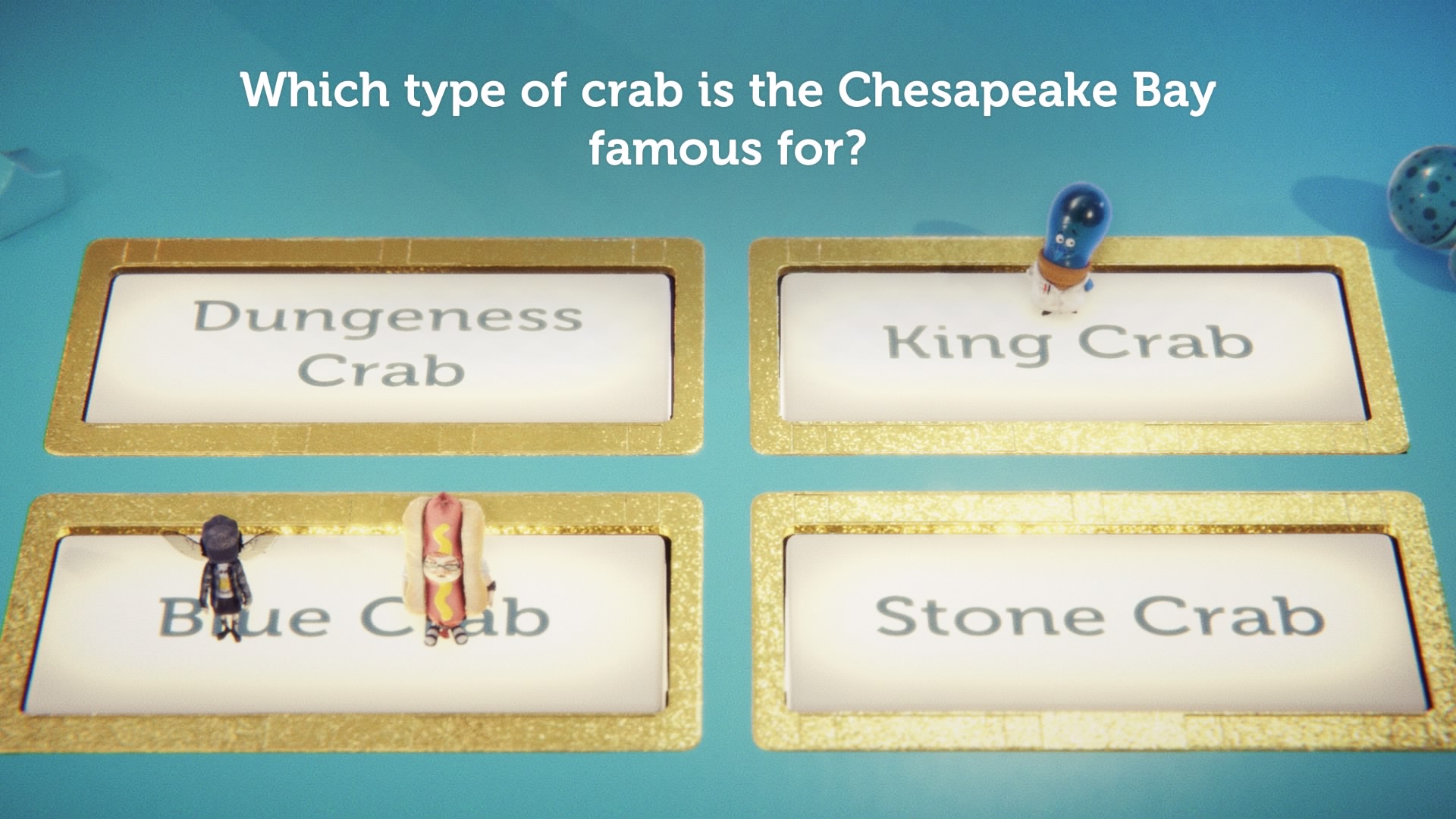 Gather your friends and step on up to see who knows the most. What’s the best way to determine who knows the most? Why, a game show of course! Go head to head with your besties throughout a variety of questions and challenges in order to rack up the points.

Once all players are ready, everyone chooses their character from a colorful roster, followed by a camera which pops up and wants you to take a selfie to go along with it. If you’ve ever used Snapchat, it has the same kind of feel to it. For example, the hot dog man places glasses, a mustache, and his hot dog costume on your face. This adds a sense of personality to the character and makes it easier to tell who is who. Characters range from a cowgirl to an astronaut to a blue alien and more. There’s more than enough characters to go around if you have a full group of six people playing.

In Knowledge is Power, your phone or tablet is your controller, you will use it to choose your answers without worrying about your friends copying you. The topics of the questions are determined by the players; four doors, each with their own label, appear in front of the characters. Each person chooses which door they want to enter and the majority decides which topic wins. If there is a tie, the game will randomly choose between the tied doors. Once all players enter the door, the question is generated.

Choosing a category on your phone

Knowledge is Power applies a unique aspect to the topics that you might not expect. Instead of random topics, the previous question affects the next options. The next options tend to be related to the topic of the question that was just answered. For example, imagine the first topic was movies. The next set of doors might be something along the lines of dramatic movies, actors and actresses, famous films, and action heroes. This allows the players to change the path of the questions and focus on what they want to quiz themselves on.

Between choosing a topic and actually getting the question, each player chooses a power play from a group of three. Power plays are either obstacles to throw at your opponents or chances to get extra points for yourself. After picking a power play, you choose what player you want to inflict it upon. The effects stack and can really hinder the player. There are some interesting options including gloop, freeze, and nibblers. The gloop needs to be rubbed off the screen to reveal answers, the freeze encases answers in ice that needs to be tapped to break, and nibblers block out random letters on every answer. These add an extra challenge when trying to answer first, something of real importance, as the faster you answer, the more points you get.

In addition to the regular questions, there are two special types of games: linking and sorting. Linking provides a topic and tasks you with connecting corresponding terms within a certain time limit. For example, you may need to match characters with their specific catch phrases. Sorting gives you two different categories that you need to sort answers into. For example, you may need to separate artists and writers as a variety of names are placed in the middle. After sending an answer to the left or right, another answer will appear. This continues until time runs out or you get through them all.

The final phase of the game is the pyramid. The pyramid is made up of rainbow steps and your points from the earlier rounds determine where you start; the more points you earned, the higher up you start. The gameplay is essentially the same as before, except you’re working your way to the top of the pyramid. In this case, the faster you answer, the more steps you ascend. Whomever reaches the top first is the winner of the game. With the way this challenge works, any player can turn the tides. The player in last can end up winning or the person in first could end up failing miserably.

Knowledge is Power is a blast to play with a group of friends and keeps you playing. Seeing what everyone knows along with in-game methods of making things harder for each other causes chaos, but in a good way. It keeps the fun going and can definitely be the life of the party.

Knowledge is Power is more than just another trivia game, it's a battle of wits and reflexes. The goofy characters and the ridiculous hazards will cause everyone to burst out laughing. Once you start a game, it might not be long before you realize you've played another five.

Codi loves to play video games and watch movies. He will watch almost any kind of movie just to experience them. His ideas take inspiration from the shows and movies he watches, and games he plays. He also loves a good pun.
Related Articles: Knowledge is Power
Share
Tweet
Share
Submit