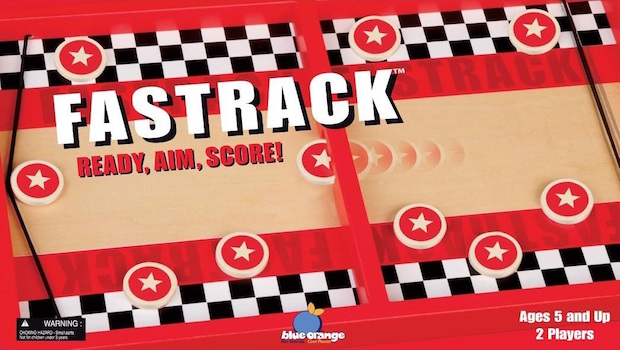 Admittedly, I dismissed Fastrack when I first saw it, though I can hardly be faulted. Relegated to the game section of a craft store to entertain my children while my wife shopped, I noticed a display copy of Fastrack on a table with some other games. My children bounced from game to game but seemed to stick with this one, publisher Blue Orange’s game on slinging wooden discs across a board. They eventually requested that I should buy it sometime. I declined, believing the chances of finding a quality game in store devoted to yarn was as likely as finding a nice craft beer on tap at Chuck E Cheese.

A few months later Fastrack arrived on my doorstep. My kids remembered the game before I did. In fact, my initial reaction was disbelief. I review games, not curiosities doomed for the clearance bin at a Dollar Tree. Ok, the board was a bit sturdier than I recalled once I unboxed it. The racing stripes along the edge mixed well with the bright red borders. It certainly wasn’t flimsy. The machine-cut, wooden discs were all smoothly made and each fit easily through the hole in the wall that runs across of the board. So, it was well made. It still wasn’t a game.

After several plays, I realized I needed to reevaluate my definition of a game. The object of Fastrack is simple enough. Two players get five wooden discs each. Using an elastic string on either end of the board, players attempt to shoot their discs through the hole. Once one player has managed to get all the discs to the other side of the board, they win. No pieces. No cards. No elaborate rules. That’s the game.

The game moves quickly as each player attempts to get all of the discs moved to one side of the board.

Yet, it’s the simplicity of it that helps make it appealing. There’s an illustrated set of rules for the game, but it’s not like you need them. It’s fairly apparent what the goal of the game is. There’s no strategy or anything, but the game is over in a matter of minutes. There’s no thinking in this game because if you take the time to line up a shot, you’ve already lost. My only suggestion would have been to include more than one hole in the wall to shoot through. Often, players’ discs will collide as they attempt to pass through the one available slot.

No one could blame you if you assumed the game had a sweet spot, nearly guaranteeing success with every shot. Yes, if you took the time to line up a shot you’ll likely make it more often than you miss, but the nature of the game is simply too frantic for that to happen. Shots have to be fired fast and continuously to win. Patience is certainly not a virtue in this game, though players better at hand-eye coordination will have the upper hand.

Brevity also adds to the game’s appeal. While the playing time is stated as 10 minutes, it would require both players to be blindfolded to reach that length. Two to three minutes would be enough to see one game through and on to the next.

I did learn a lesson that games can be more than moving armies or managing cards, but let’s not let my epiphany get out of hand. After all, this is a game where you are simply flicking discs over a board. It’s fun, fast, and easily put away. Fastrack’s strengths are also its weaknesses. You’ll have fun with it for a time, but it’s hardly going to scratch the itch of wanting something with substance.

That said, appreciate it for what it is, a quick playing game anyone can enjoy. Kids will enjoy the frenzied nature of the game play. Gamers and non-gamers will find some common ground. The price tag isn’t bad, but smart shopping could land you this for under $15. There may be better ways to spend that money, but I promise there are far more ways that are worse.

Fastrack is easy to get into and quick to play. It can entertain gamers and non-gamers alike of all ages though it's long term appeal may be lacking. Still, with its reasonable price tag, it is a nice filler option.