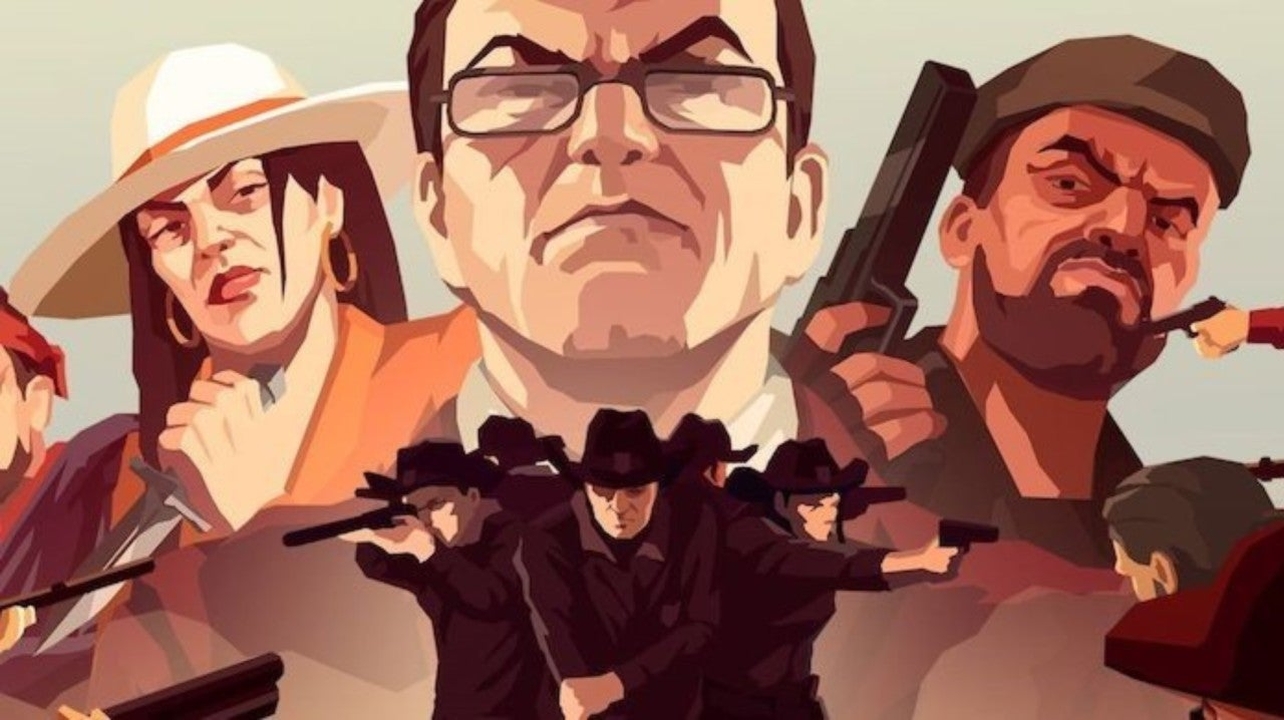 If you played This is the Police (our review) or its sequel, cleverly entitled This is the Police 2 (our review — a significant improvement over the original), you might have noted that the game went from methodical police drama into an XCOM shootout mode. These tactical combat moments were a real highlight, so developer Weappy Studios decided to double down on the premise. Welcome to Rebel Cops.

The storyline for Rebel Cops, indicated by the wide-brimmed cowboy hats and downright American names, takes place seven years after the events of This is the Police 2 in a little town called Ripton. Local mob boss Victor Zuev has done his best Brad Wesley from Road House impression, taking over the town including the hospitals, small businesses, and even the local police. Well, a few of those cops didn’t think that was ok, so they decided to take the law into their own hands.

The storyline for Rebel Cops is enough to spur you on your way through the roughly 15 hours or so (depending on difficulty levels and if you re-run levels for a better outcome) the game presents. The idea of carefully deconstructing the criminal enterprise slowly and methodically is thrown out the window as you are thrust almost immediately into a shootout while taking over a train — not exactly the quiet and tactical slow roll towards justice I might have expected. Being completely honest, however, it’s this whiz-bang start that broke the pacing for me.

The best cops are the ones that don’t have to drop the hammer in the field. They are the ones that can get a suspect to surrender, cuff them, and remove them as a threat peacefully. While all of what I just described are XP-yielding good options, there is little to no penalty (beyond slightly less XP) for blowing a hole in your enemies a mile wide. There is a reputation system that affects whether or not a local vet will stitch you up, or might offer you up some level of discount for things you buy from the black market, but unless there is a specific objective to not kill people, the only thing slowing you down is ammo. Put simply, once I realized this, it took some of the tactical bite out of the game, and I found myself setting up kill funnels instead of sneaking around for clean arrests. Sure, my reputation took a bit of a hit, but as long as I kept a reasonable amount of these folks in handcuffs, the public didn’t seem to mind the dead ones. 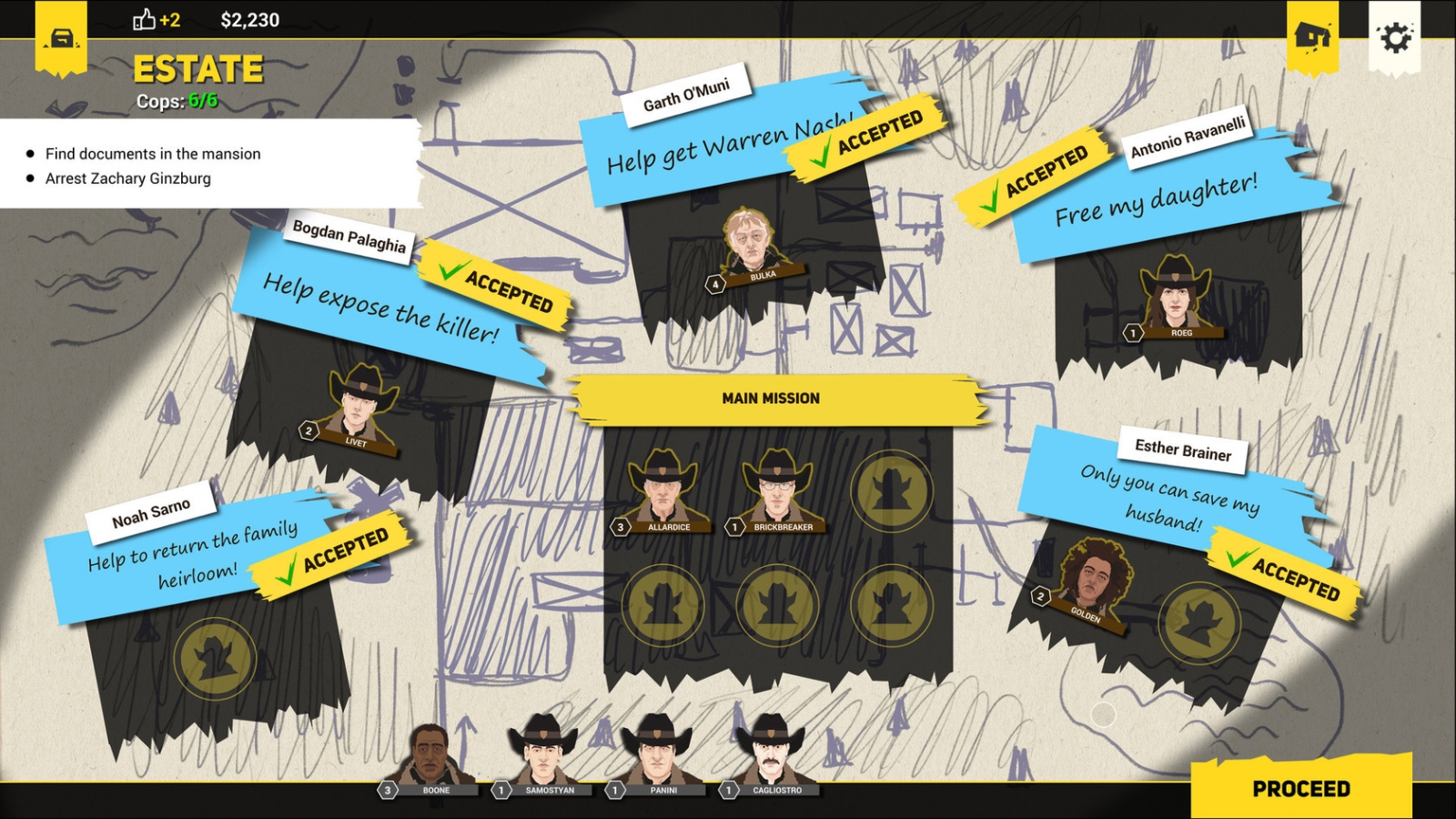 Who you send, and how tired the are, makes a massive difference.

When I do knuckle down and play the game the way the developers likely intended, it works very much like other isometric tactical turn-based strategy titles. Each cop gets to take two actions per turn, and based on their equipment those actions can be shouting at a perp to get them to put their hands up, whacking them with a billy club, slapping on the cuffs, stunning them with a taser, throwing teargas or grenades, or slinging hot lead. You can also move at a normal pace, or sprint using both actions points. Killing a suspect leaves their corpse in plain view for others to see (though you can spend a point and some mobility to move the body), but arresting a suspect makes them disappear from the field. The beats are fairly familiar.

There is a new mechanic in Rebel Cops that I’ve not seen elsewhere — if your cops step into the line of fire or anywhere that they might get spotted, the other officers will chirp on their mic and warn that officer to stop in their tracks. They can only do this once per outing (for some reason) and you’ll be prompted to either halt and avoid the exposure, or charge in Leroy Jenkins style. The problem is, I never quite figured out what triggers it. There were moments where I practically waltzed directly past perps and they didn’t care and nobody said “boo” about it. Other times I felt the omnipotent hand of people who could see around corners, upsetting the delicate sensibilities of my officers. Entering rooms is a little more clear, with enemies being revealed where previously they might have been hidden. The mechanic is great, in theory, but it needs a little bit of work. 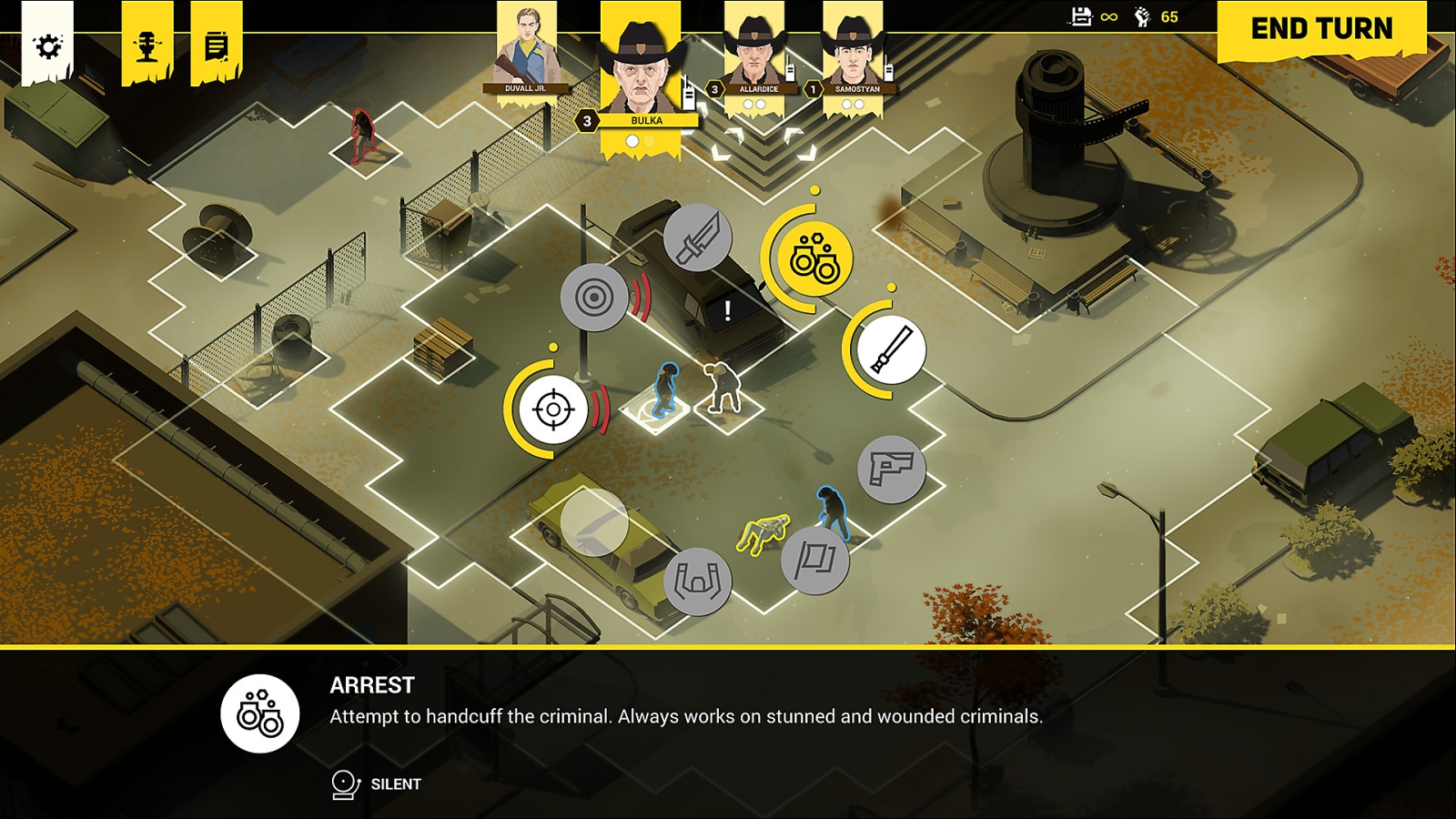 Slap the cuffs on ’em, or slap them in the head with your billy club first?

Beyond the basic mechanics, you need a little bit of cop theory to keep you alive. That means deploying your officers in pairs, slicing the pie around corners and keeping your sight lines clear, and staying behind cover at all times. As in other cover shooters, you have half cover and full cover, with all that implies. Moving into rooms with multiple entrances and exits makes that more harrowing as you never really know when that opposite door will open. It’s these moments where Rebel Cops shines brightest.

There are a little over a dozen hours of outings, with various side missions to earn extra XP and cash, and each one more dangerous than the last. As the fog of war is a heavy blanket over the entire playspace, you are always going in blind. An open area means a lot of opportunities to get spotted on approach. An open door means possibly getting shot in the back before you even have a second to react. There’s an XCOM level of brutal gameplay on display here, and when a mission goes loud you may find all of your officers dead or bleeding out in a matter of a single round. When shooting at suspects you can target specific areas (hands cause them to not be able to fire, legs stops them from moving, a chest wound incapacitates them, and a headshot kills them instantly), but that same mechanic applies to your officers. As you can see in this mission below, all was going well until it very quickly wasn’t.

In between missions your officers will need to rest and recuperate lest they become less effective in the field. As you continue to earn experience they’ll go up levels which can let them earn perks, as well as stat bonuses that help them carry more gear, take more accurate shots, and move a little further in the field, which can take the edge off those disadvantages if you don’t have enough cops to tackle a mission. Rather than selecting “classes” for your cop like assault, shotgunner, or sniper, you instead get rewarded for your playstyle. If your cop stays in the shadows and arrests folks quietly, they’ll receive perks that match that playstyle. Similarly, if they’ve dropped the hammer on someone they might earn a perk that helps them take an aimed shot. Other perks include being able to better dodge incoming fire, the capacity to carry on firing after a hand hit, or being able to take a third action during a round, all of which really help when things go sideways.

There’s no avoiding it — eventually you are going to end up in a shootout. Since your officers have no health bars, they will slowly bleed out over time unless another officer bandages them. That means you need to have that officer nearby and have the forethought to purchase bandages as they’ll bleed out in six turns for an extremity, or three if they catch a round to the chest. To help you with perps that are dug in, you have a sniper that can see through any open window, though they have a long cooldown on their skills and everything they do is loud. Just like other tactical titles, your officers can go down in a hurry, and their rookie replacements will be ill equipped, facing an uphill battle unless you have some veterans to pair them with for the next outing. 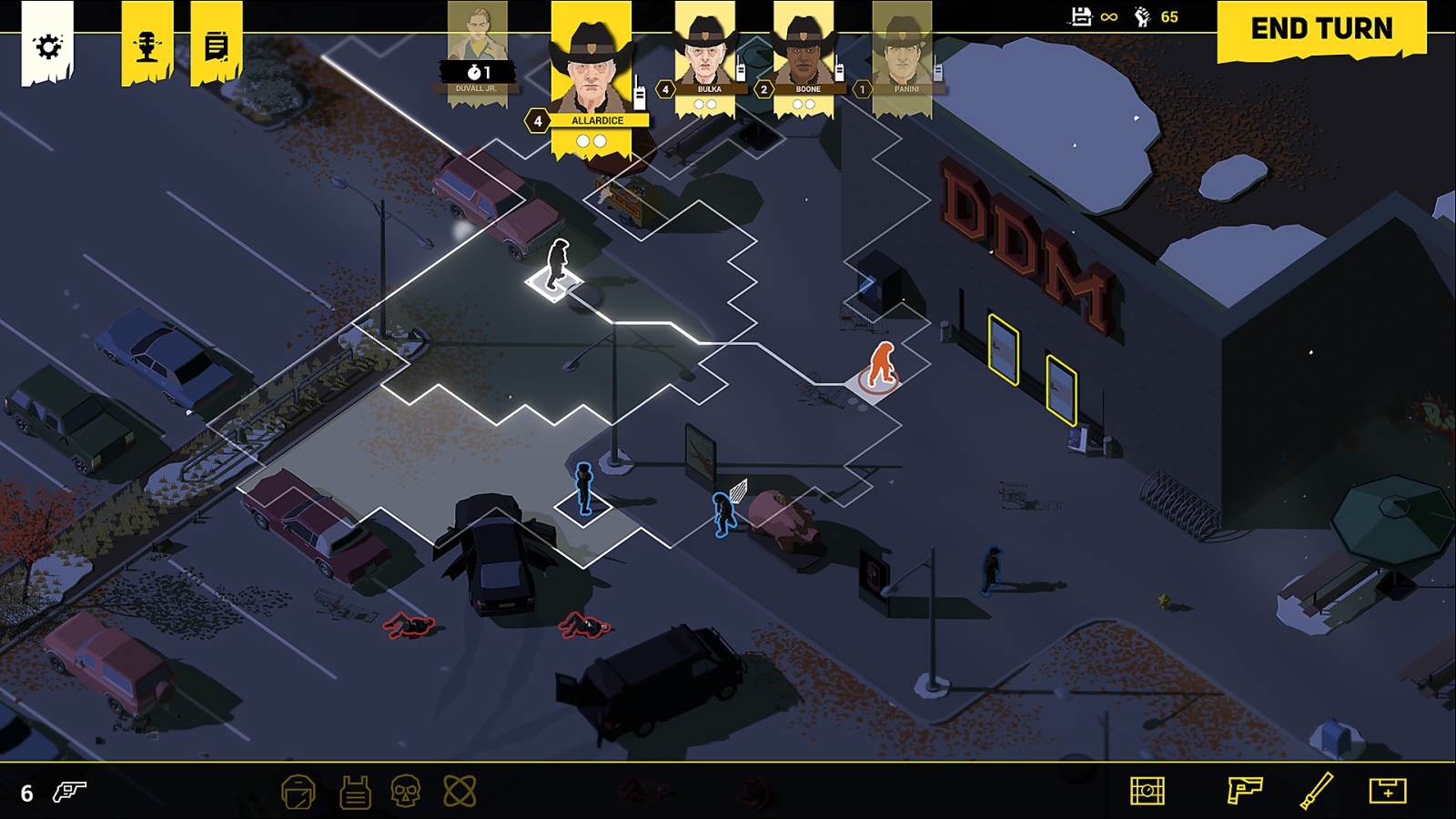 I do have a UI issue that bit me quite a few times. More times than I can count I accidentally reloaded a save instead of overwriting it as they are nested in the same window. Please, for the love of all that is holy, separate them. You only get five saves per mission (unless you turn on the unlimited saves option), so losing progress because you accidentally click the wrong thing is salt in the wound.

While I spent the bulk of my gameplay time on PC, I also took the Nintendo Switch edition out for a few hours during a recent flight. While the game works the same mechanically, visually there are some big differences. Trees and other objects in the environment look somewhat shimmery when in motion, and text can be hard to read. Still, it’s only really noticeable by comparison, and the text problem goes away when docked. Being able to take a good tactical game on the go overrode my need to squint.

Rebel Cops is a solid tactical game with a somewhat cliche storyline. While some of the mechanics are a little half-baked, the progression system and combat are engaging and tense. The game forces you to really think through your actions thanks to the limited save system, I just wish there was more impact to playing it loud.

Ron Burke is the Editor in Chief for Gaming Trend. Currently living in Fort Worth, Texas, Ron is an old-school gamer who enjoys CRPGs, action/adventure, platformers, music games, and has recently gotten into tabletop gaming. Ron is also a fourth degree black belt, with a Master's rank in Matsumura Seito Shōrin-ryū, Moo Duk Kwan Tang Soo Do, Universal Tang Soo Do Alliance, and International Tang Soo Do Federation. He also holds ranks in several other styles in his search to be a well-rounded fighter. Ron has been married to Gaming Trend Editor, Laura Burke, for 21 years. They have three dogs - Pazuzu (Irish Terrier), Atë, and Calliope (both Australian Kelpie/Pit Bull mixes).
Related Articles: Let's Play, Rebel Cops
Share
Tweet
Share
Submit