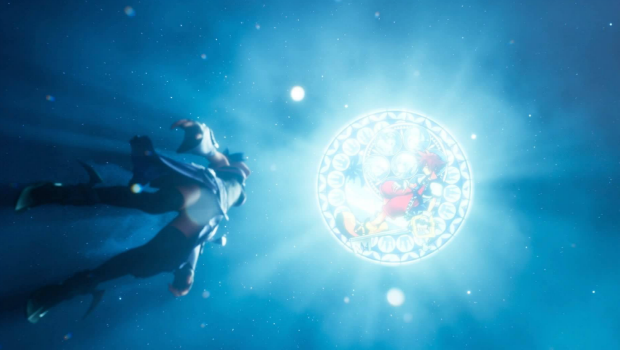 Kingdom Hearts, in all its bizarre glory, has relished in the use of numbers and symbols to creep slowly towards the final story in its main enigmatic trilogy. The latest entry, Kingdom Hearts HD 2.8 Final Chapter Prologue, is a bit short on full-length action, but provides a delicious slice of the future that has me longing for Kingdom Hearts 3 more than ever.

Featuring a HD remaster of Kingdom Hearts: Dream Drop Distance, a cinematic “χ Back Cover” (based on the free-to-play mobile game), and the beautiful, wonderful, and painfully short Kingdom Hearts 0.2: Birth by Sleep – A Fragmentary Passage, Kingdom Hearts HD 2.8 Final Chapter Prologue is a scant, but promising look to the future.

The HD remaster of Kingdom Hearts: Dream Drop Distance is the only “full” game included with this package, and with the other content being so short this package feels like a glorified HD re-release. A Fragmentary Passage acts as an extended sneak preview, with χ Back Cover being little more than a bonus video. Despite this, each inclusion has the quality expected with the series, and is equal parts charming and confusing with gusto.

Dream Drop Distance is one of the more underrated Kingdom Hearts titles, but this HD upgrade may change that. The game focuses on Sora and Riku in a dual storyline as they prepare for their Mark of Mastery exam. Either via timers expiring, or through your own choice, you “drop” between the two characters, and proceed from the last point left off.

The “Drop” mechanic is similar to the Gummi Ship missions of other titles. You’re falling through an infinite seeming wind tunnel filled with obstacles, enemies, and prizes. This acts as a minigame and provides different items and other goodies upon completion and goals being met.

The game also features a creature creator that uses blueprints and found components to create friendly versions of the “Dream Eater” enemies you encounter. There are numerous types of these enemies and the friendly versions, known as spirits, can be leveled and created optimally as you progress.

This game also features two physical ability changes that are unique to Dream Drop Distance. The first, “Flowmotion,” is a free movement ability that allows you to grind rails, spin on poles, and jump from wall to wall. You can also use special attacks from this mode. Secondly, the game features Reality Shift, which changes items (that give a pink indicator as opposed to standard blue) into special moves such as slingshots, hidden text reveals, and also provides some mini-games unique to the current world.

The HD remastering is shiny and super high resolution, but everything still has the original Kingdom Hearts look from the first game that is fairly iconic now. Dream Drop Distance looks great, but it doesn’t feel like it’s pushing the PS4 to the limit. I found myself saying, “Well, if this is what Kingdom Hearts 3 is going to look like, then that’s underwhelming.”

Fortunately, this is not the case. Kingdom Hearts 0.2 Birth by Sleep – A Fragmentary Passage serves as a story prologue and a teaser for the next game. A linear gauntlet of increasing difficulty played at a maximum level character build, the game shows off the speed, grace, and gloriously dramatic grandiosity that I only expect will grow in the full release.

A Fragmentary Passage centers around Aqua, a keyblade master introduced in the original Birth by Sleep release. Trapped in the dark world, you spot Cinderella’s castle in the distance. Aqua must find a way into and through the locale, facing the darkness as she progresses in more daunting and deadly ways.

Aqua moves with blinding speed, has incredible dexterity and jumping ability, and the game flows so perfectly between air and ground maneuvering that you’ll barely notice a difference. The game uses the very fluid movement system to implement creative secret area locations, keeping you aware of your surroundings as you try and find all the inconspicuous secrets.

The battles here are the best in Kingdom Hearts yet. Aqua has a five strike combo default that easily moves from ground to air. Automatic dashes occur when attacking in order close distances quickly, and a shortcut menu allows use of spells with ease. A spontaneous shortcut menu also appears if you use a spell, allowing quick use through the triangle button, as well as the triggering of special attack modes. Aqua utilizes a special attack mode named “Spellweaver” which increases attack power, and “Pathfinder” which transports you immediately to the enemy as you attack. The Pathfinder mode also triggers a special finishing move when used with a preceding combo. Both are quick and easy, provide opportunities for powerful finishing blows, and work magnificently in the heat of battle.

The boss battles are large, varied and full of peril and patterns. The game provides the constant epic action that makes Kingdom Hearts so well received. Tornadic demons that fill the arena, shadow warriors that fight with deliberation and skill, and an iconic meeting with a Darkside that takes new form show off just a sliver of what will be in the next release.

Areas are huge, open, and detailed down to the shiny gold lining on chests reflecting back at you. A room with a mirrored floor provided me one of the most spectacular and mesmerizing gaming experiences I’ve had, and a scene featuring a ever imposing backdrop of towering Heartless captured the darkness of Square Enix and the grand dramatics of Disney in a perfect manner.

The game allows you to customize Aqua’s look, with accessories, patterns, clothing items, and the ability to select the colors for the items used. This is pretty minor, but interesting, and opens up for many possibilities in terms of look, feel, and potential added buffs and abilities.

While this game is beautiful, fun, fluid, features puzzles and several boss battles, there is only about three and a half hours of gameplay here. It’s criminally short and does very little else than showcase the future features and gameplay to come in Kingdom Hearts. Its is somewhat expected that the game would be short, but still a let down on what I believed could be a potentially ten hour experience.

Lastly, the cinematic χ Back Cover is a short film detailing background information related to the recent Kingdom Hearts Unchained χ for mobile devices. It is the story of a group of faction leaders in a unified group under control of the Master. Betrayal, painful realizations, and more confusion await, fitting it right in with the rest of the Kingdom Hearts mythos. It’s well done, but it is a video nonetheless and if you have not played the mobile title, it may mean little to nothing to you since it relies on your knowledge of Unchained χ’s story campaign.

Kingdom Hearts 2.8 Final Chapter Prologue is a morsel that updates a small bit of the past with a very nice Dream Drop Distance HD Remaster, details a bit of the present with the χ Back Cover cinematic, and shows a smidge of the glorious future with Kingdom Hearts 0.2: Birth by Sleep - A Fragmentary Passage. The gaming content is high quality, but low quantity, leaving you wanting more. Great for junkies needing a Kingdom Hearts bump to get them through the long wait should get this immediately.

Patrick Rost has been with Gaming Trend since 2013. At first focused on sports coverage, Patrick has gone on to cover a wide range of games and other products for the website. Outside of Gaming Trend, Patrick writes and records music, grinds perpetually in Elder Scrolls Online (PS4), and lives day to day with his two dogs, Bob and Stella.
Related Articles: Kingdom Hearts 2.8 Final Chapter Prologue
Share
Tweet
Share
Submit