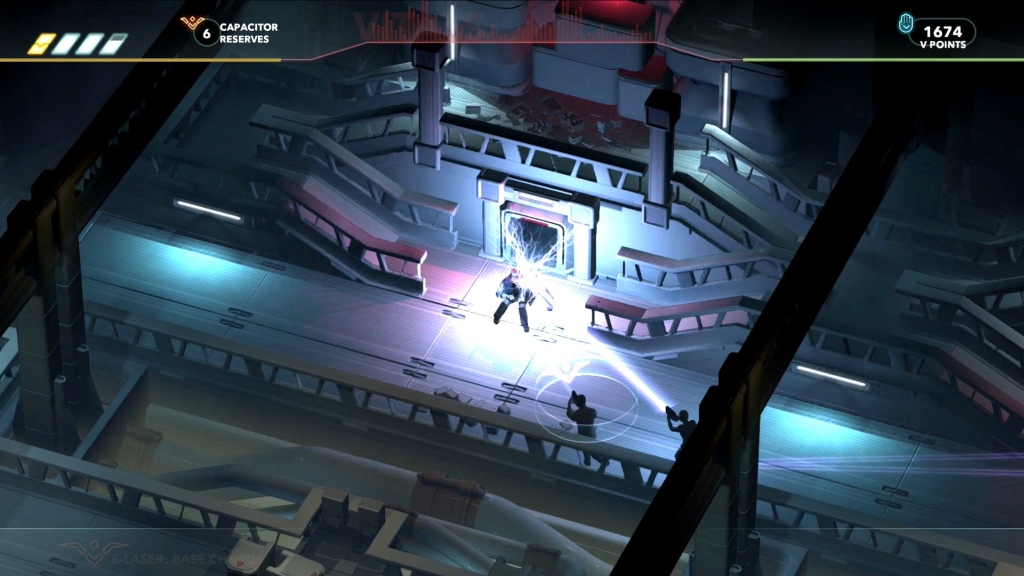 Divide starts off throwing the player directly into the fray. The protagonist and an unnamed woman find themselves fleeing from rolling robots and some sort of security force through the twists and turns of some sort of underground facility. As the chase escalates, fortune turns and they are captured. The game then pops back six weeks to explain just how we got here.

Divide is equal parts point-and-click adventure and isometric shooter, wrapped in an all-too-simple cyberpunk wrapper. While the story can be a bit uneven (mostly thanks to some of the voice acting), it’s the control scheme that drags Divide down.

David has to unravel the mystery of Vestage

Divide tells the story of David, our previously-unnamed and recently-widowed protagonist. His wife worked for a company named Vestage who seemed to be up to some fairly nefarious business. When David is contacted by his wife’s ex work partner and given possession of a locked case, he finds himself embroiled in the world of cyber espionage and thrown full-force into a world he doesn’t understand.

David aims his stun gun by standing in place and aiming in a 360 degree arc, like a standard twin-stick shooter. Unfortunately, hitting your target with two successive shots (the mechanized enemies require two hits to down) is far more difficult than it should be. Carefully thumbsticking in the direction of a target, Daniel can score a debilitating headshot on human targets, dropping them where they stand, but most of the foes you’ll encounter are mechanical. Since these enemies require two shots to take out (or you can approach them at point blank range to hack them), and your pistol requires an inordinately long time to recharge, the game vehemently discourages anything but one-on-one combat.

The single-shot stun gun is a pain.

Fast forwarding a short while exposes the primary gameplay mechanic of Divide. Your partner, Eris, can hack into servers, removing a layer of security from all other mechanical objects in the game. This allows David to use his lenses (hello Cybereyes from Neuromancer) to pull security hashes from vending machines, kiosks, and checkpoints — the game calls this “glancing”. To hold this cyber-door open, Eris has to remain at the terminal while David explores. When not stuck at the console, Eris can join David to engage targets at his side. You can cheat the system a bit by luring targets to her but that’s just covering the problem of the poor combat controls.

Most point-and-click adventures devolve into rubbing your face against the walls until you stumble on the correct pixel (key, switch, hidden trigger, etc.) that lets you unlock a door. That loop is hidden behind the aforementioned collection of hashes. You can upgrade the criminally-underpowered stun pistol, or gain new skills such as the ability to remote control robots, by spending currency at vending machines. You collect these from boxes scattered in the environment. Unlocking doors requires manipulating servers and ‘glancing’ through the doors by using hashes. Some doors require a single hash, some require a dozen. None of that will help you find your next objective, however.

I’m not the type of gamer that expects a constantly pulsing waypoint or HUD indicator that tells me where to go next, but so much of Divide devolves into constant backtracking until you stumble on the next area you need. There is a box containing a text description in the Minority Report-esque HUD, but the map is woefully undetailed, making for a lot of aimless wandering.

If there is one overarching feeling that Divide suffers from it’s one of being entirely obtuse or simple too vague for its own good. There is a very minimal tutorial that covers the basic mechanics (though why Developer Exploding Tuba Studios chose to use the right trigger as the focal point, I don’t know), but the game lets you stumble into the realization that you pick up upgrades at vending machines. Those upgrades are couched in some “L337 5p33k” language that doesn’t convey what those upgrades will provide until after you’ve purchased them.

The game has wonderful potential, marred by clunky controls

I was surprised, with the power of the PlayStation 4, to find that Divide’s undemanding art style causes some inexplicable framerate issues. It’s thankfully infrequent, but it does serve to underscore that Divide might have fared far better had it spent a little more time in development. While there have been two large patches since launch, the clunky aiming and inconsistent framerate remains.

I’d be remiss if I ignored the score for Divide. Composer Chris Tilton does a fantastic job with the music of the game, evoking both cyberpunk electronica and beautiful orchestral scores. It’s a high point for an otherwise uneven experience.

Rich in story, but less so in execution, Divide suffers from a few technical issues that makes it a little more clunky than it should be. That said, the cyberpunk narrative is evocative of the best of sci-fi, backed up by a fantastic score. I just wish the controls matched that potential.

Ron Burke is the Editor in Chief for Gaming Trend. Currently living in Fort Worth, Texas, Ron is an old-school gamer who enjoys CRPGs, action/adventure, platformers, music games, and has recently gotten into tabletop gaming. Ron is also a fourth degree black belt, with a Master's rank in Matsumura Seito Shōrin-ryū, Moo Duk Kwan Tang Soo Do, Universal Tang Soo Do Alliance, and International Tang Soo Do Federation. He also holds ranks in several other styles in his search to be a well-rounded fighter. Ron has been married to Gaming Trend Editor, Laura Burke, for 21 years. They have three dogs - Pazuzu (Irish Terrier), Atë, and Calliope (both Australian Kelpie/Pit Bull mixes).
Related Articles: Divide
Share
Tweet
Share
Submit