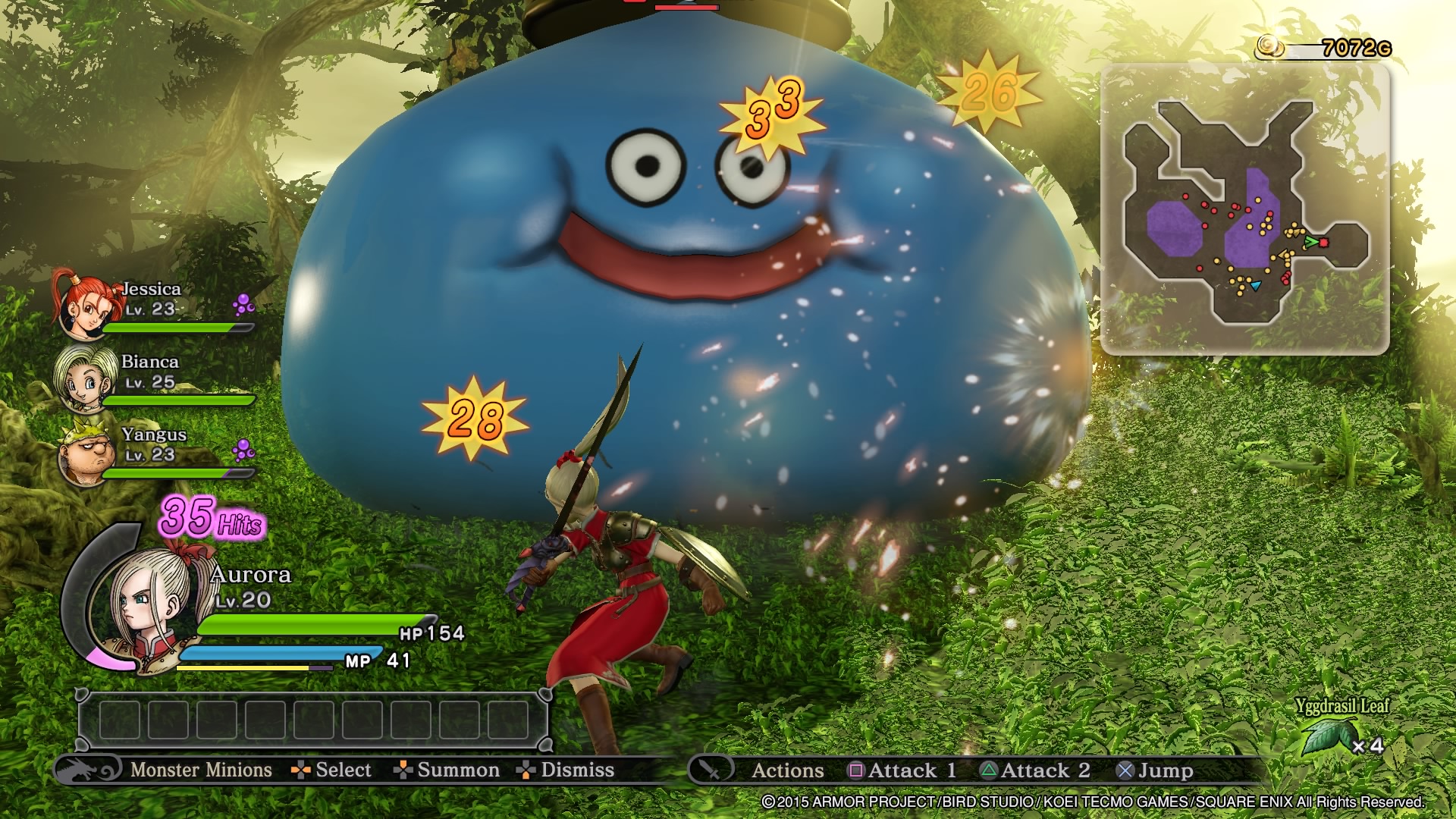 Having no prior experience with Dragon Quest before picking up Dragon Quest Heroes: The World Tree’s Woe and the Blight Below, I was as intimidated by my lack of background knowledge as I was by the subtitle. Dragon Quest was a series that always stayed on my periphery – in some weird way, I considered myself a Final Fantasy player, and so never bothered to cross lines and try the other brand.

What I do have a great deal of experience with are musou games, likely better known as Dynasty Warriors games and the many spin-offs from them, and I can safely say that Dragon Quest Heroes is the best musou game I’ve played since my introduction to the genre.

Set in a mystical realm separate from the other worlds of Dragon Quest, the storyline is rather straightforward: you choose one of two protagonists, who are co-captains of the king’s bodyguard outfit, and become the unassuming saviors of the world when a great evil makes all the monsters turn on humans and ruin their peaceful coexistence.

It’s a little fairy-tale-ish in the best ways, because it allows the characters to reach extremes within their persona and still feel like personable, affable people. As heroes from other dimensions (other Dragon Quest games) get sucked into your world and join your party, you gradually flesh out a roster that fills your four-person combat outfit.

Jessica and Yangus will be obvious fan-favorites due to the amount of fervor I’ve seen online for their title, but older grabs like Bianca and Terry are still great fun to play as, and come off as characters of great dynamics. They can act like caricatures at times, but can still be endearing and interesting characters when it comes to the heavier story moments. This likely isn’t news to anyone familiar with the series, but for a newcomer, I’m more intrigued now to go back and play these characters’ respective titles because of Dragon Quest Heroes, and that’s a major success for any musou game.

Series favorites Jessica and Yangus make for just a part of your amazing roster.

Quests take place across a variety of locales, and the different maps do a good job of keeping things fresh with different layouts and challenges to consider. Most of the side quests and special challenge maps revolve around taking down a certain number of enemies (or one big enemy) as fast as possible, while story missions generally require you to hold off waves of advancing foes to defend a critical objective.

Having four members in your party makes that easier, but when you have multiple lanes and waves of enemies to defend against, you’ll have to make use of monster coins. Killing enemies will sometimes drop monster coins, which allow you to summon that monster on your side, either to defend a location or for a quick boost in power for your team. This becomes a key component of the game, as you’ll often find yourself hunting for the biggest, baddest boss to kill and then put in front of your objective for defense against waves.

The way these two changes, in objectives and allowing monster summons, work together creates a really enjoyable new kind of musou experience. You’re not spending time running between bases to defend them or deal with random Lu Bu sightings, but you’re actually fighting the monsters and thinking ahead. This also lets the monster design be a little more aggressive and combat be a little more involved, because you don’t need the player to worry about bases and generals – you can have longer, drawn-out boss fights with monsters that utilize a number of abilities and attacks.

Characters like Bianca feel completely different from everyone else, a great thing in a musou game.

Out of game, there’s a lot of equipment upgrading and crafting to do to make sure you have the best gear possible for fights. While most of it came off as superfluous at the start, I had noticeable power increases when equipping new accessories and weapons, and really got into the crafting and alchemy. It’s surprising how interesting the metagame aspects of Dragon Quest Heroes becomes, but you’ll soon find yourself as interested in finding the right components for a high-tier ring as you would be in taking on a new map or boss. I just wish the armor and weapon upgrades felt like they had more effect than just a visual upgrade and numbers boost – there was a missed opportunity in giving weapons special modifiers, and instead armor upgrades feel really boring to buy and weapons are only interesting for the new visuals.

My complaints would reside in the overload of artificial repetition that happens, as different vendors will often want you to replay maps just to grind for random item drops from enemies. It’s the one part of Dragon Quest Heroes that feels repetitive and boring, and I just started ignoring the item request portion as a whole because of it.

Does this King Slime’s face look like the face of mercy?

Technically, the game runs really well, except for in the main base, which hitches now and then for some odd reason. The character design is fantastic, and retains the Dragon Quest aesthetic beautifully in 3D. Slimes and skeletons look fantastic, and each character’s Tension attack looks just stunning.

Variety is the name of the game here, and Dragon Quest Heroes nails it in everything, from its memorable cast of unique and fun characters to play as to the different mission objectives and locales to fight in. I was never bored with this game, an issue I often find in other musou games, because there was always an element of new challenge to every event.

When I became complacent in combat, new monsters would force me to change up my fighting style. When one locale got a little too rote, I was up in the trees or underwater instead for the next map. This is one of the most entertaining and unique musou games around, and certain to appease Dragon Quest fans and newcomers alike.

Dragon Quest Heroes: The World Tree's Woe and the Blight Below

Dragon Quest Heroes: The World Tree’s Woe and the Blight Below is an excellent musou game and a blast to play. It retains its Dragon Quest heritage beautifully, while still creating an experience fun for any fan of musou gameplay.

I'm a Texas native and graduate of Texas Tech University, freelancing in the gaming journalism industry. I love games, live music, Texas BBQ and sports. Favorite games are The Witcher 2, anything from Bioware, the Kingdom Hearts series and Dota 2.
Related Articles: Dragon Quest Heroes: The World Tree's Woe and the Blight Below
Share
Tweet
Share
Submit