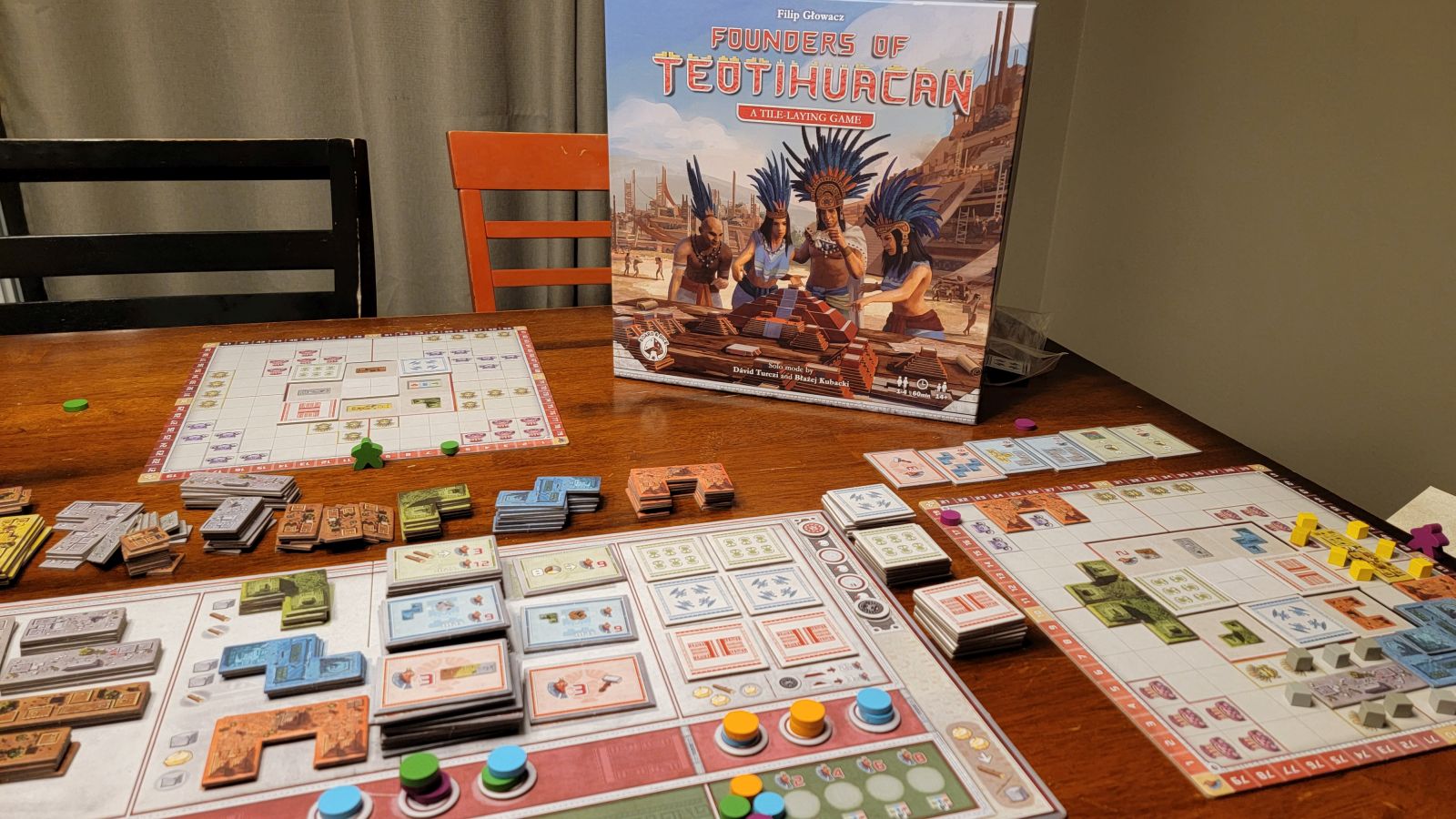 Similarly to Meeples and Monsters, I was able to quickly tell that Founders of Teotihuacan isn’t for me, but I was also able to see the things that it does that makes it good for other people. I’m personally averse to multiplayer solitaire games, but I totally understand how they’re great for people who want to play in their own pillow forts and hate when other players’ blanket forts bump into theirs.

For those of you who are less familiar with the hobby, low interaction euro games are colloquially referred to as multiplayer solitaire. These games, by necessity, focus upon giving each player a crunchy puzzle to solve by themselves, with an occasional bump in the road  from another player taking a space or reward you really wanted, but these are usually smoothed over by an abundance of less efficient alternatives. Where Founders of Teotihuacan thrives is presenting a puzzle that is simultaneously obtuse enough to defy mastery, but also entirely of each player’s own making. Over the course of a game, players will build up their central pyramid along with constructing temples and resource buildings in the surrounding city. Looking at their empty squares at the beginning of the game, players will haughtily assume that they will build their own Phoenix, the city on a grid, but just like the real Phoenix, their cities will quickly become disasters, thanks to every sensible human’s worst enemy, architects. After every action, the oversized architect meeples will travel to a new edge of the player board, with players only able to build entirely within the half of their city closest to their architect. 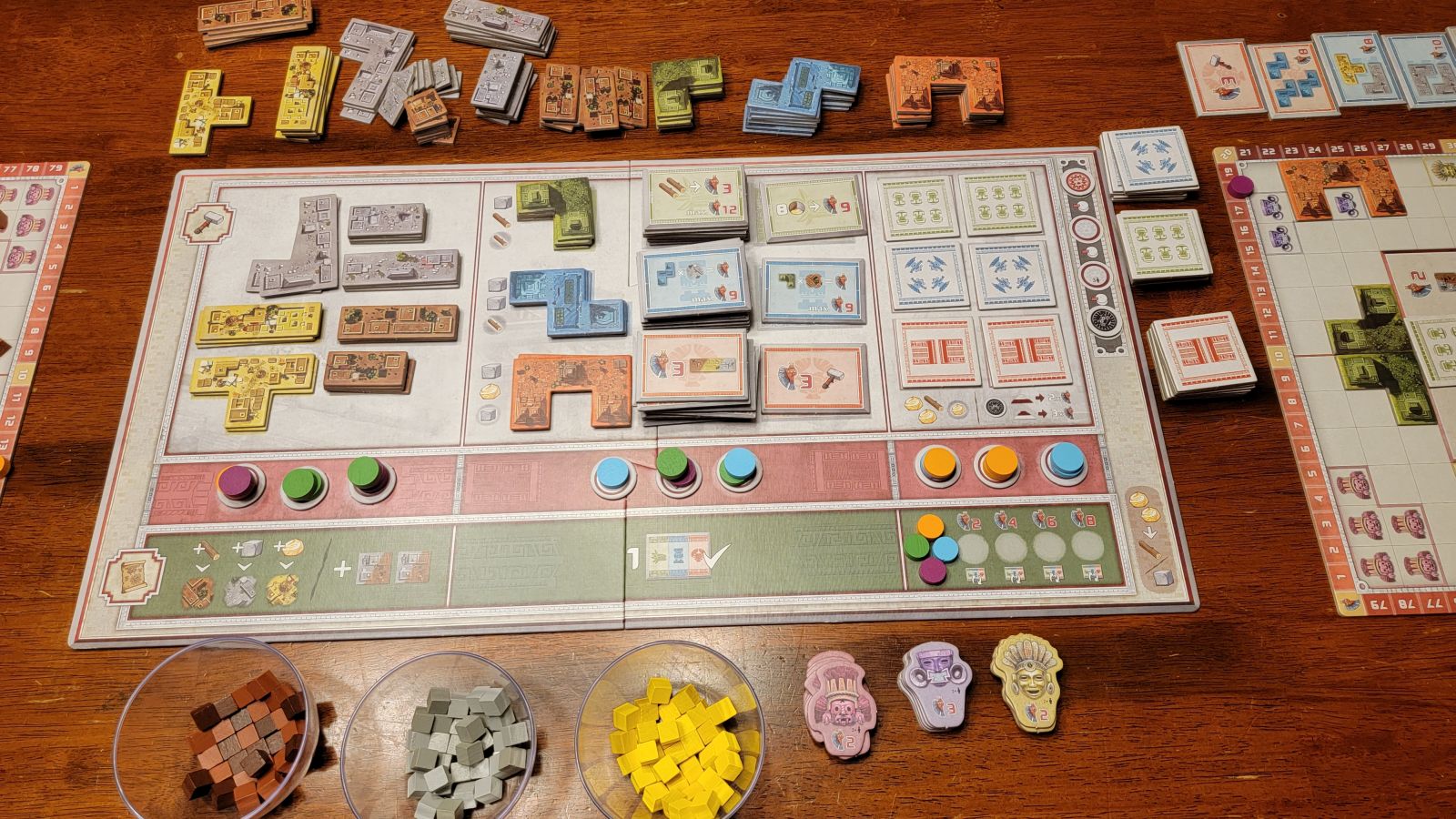 Since it moves predictably and never skips an edge, it would be easy enough to work within the architect’s limits, but like any polyomino game worth its salt, Founders of Teotihuacan features a bevy of incentives for players to place their tiles in positions that make no logical sense and quickly hem them in to a decision space that feels like a cardboard Saw game. Resource buildings drop resources into empty adjacent spaces, so you’ll want to build them off by themselves. Player boards feature clusters of masks which award points when completely covered, so you actually want to group up your buildings. In end game scoring, temples will be multiplied by like-colored pyramid tiles in the same quadrant, so dumping a color straddling one border seems strong, but the architect keeps running around making that impossible. Add in that most turns will feature some form of extra action or scoring, sometimes in multiples using bonus discs, level one pyramid rewards, and worship tiles, there’s a whole lot to optimize. Sorting out what’s viable in the moment from what’s actually going to be good in the long run is a nightmare, but an interesting one.

As much as I think that Founders of Teotihuacan does some really interesting things, it unfortunately commits some rather dire sins. I have applauded Founders’ arc, but it over emphasizes the narrowing decision space and being trapped by your own choices to a fault. While it runs some people the wrong way, there’s something to be said for making early game actions influential, especially when it plays into the game’s overall design and feel. What I do have a problem with is when a game demands important decisions from its players during setup, with no alternative for first-timers, before they’ve even taken their first turn. The claustrophobic boards serve their purpose of giving each action weight in the form of game-long consequences, so I can’t help but question the decision to have players take actions during setup. It sends the wrong message to your players, that you can’t make mistakes that are that bad, when they have the opportunity to do such right out the gates. I also feel like I have to knock Founders for its rulebook.  I can deal with a certain amount of questionable formatting takes, but there’s no reason to have a full quarter of your rulebook be appendices, and no circumstance where I can excuse having essential rules exclusively contained in them. 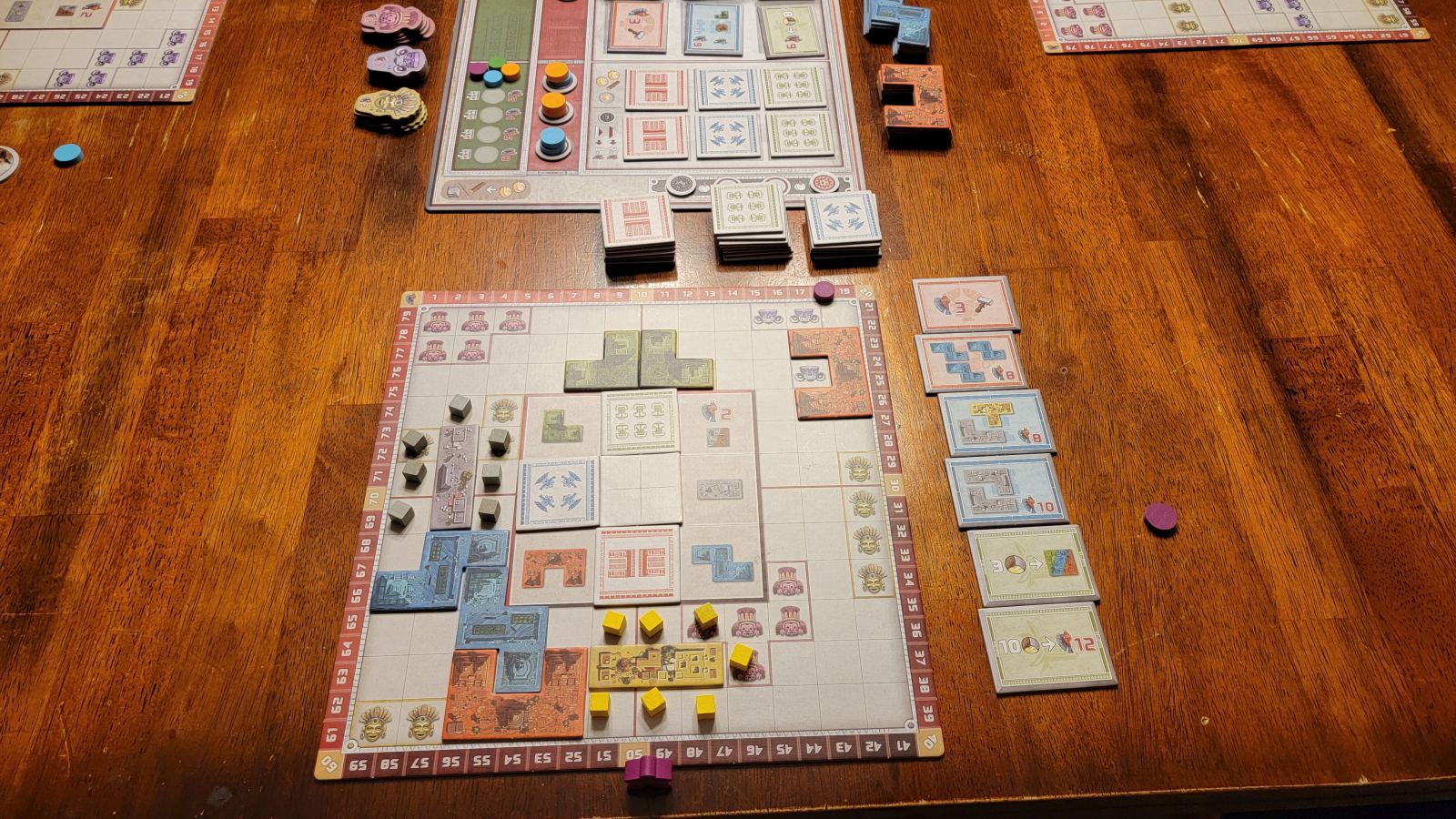 Founders of Teotihuacan does some neat things outside of how it implements its arc. When players place their discs on the central board to take their turn, the resulting action has a strength equal to the total number of discs (including bonuses) on it, with the option to use multiple at once on one space to immediately jump up to higher strengths. Some builds will require a certain strength to use, but most allow you to pay extra resources to make up the difference between your actual strength and the one the action needed. This opens up an interesting balancing act between action economy, since it’s obviously more disc-efficient to slowly build up stacks on actions with your discs, and resource economy, since it’s obviously more efficient to not be constantly spending a handful of extra resources every turn.

Playing the solo variant of Founders of Teotihuacan was almost entirely indistinguishable from playing it with four players. If you like to have your own sandbox when you play board games, and enjoy putting tiles on a grid, have I got a game for you.

Nick grew up reading fantasy novels and board game rules for fun, so he accepted he was a dork at an early age. When he's not busy researching the intricacies of a hobby he'll never pick up, Nick can be caught attempting to either cook an edible meal or befriend local crows.
Related Articles: Founders of Teotihuacan, Tabletop
Share
Tweet
Share
Submit