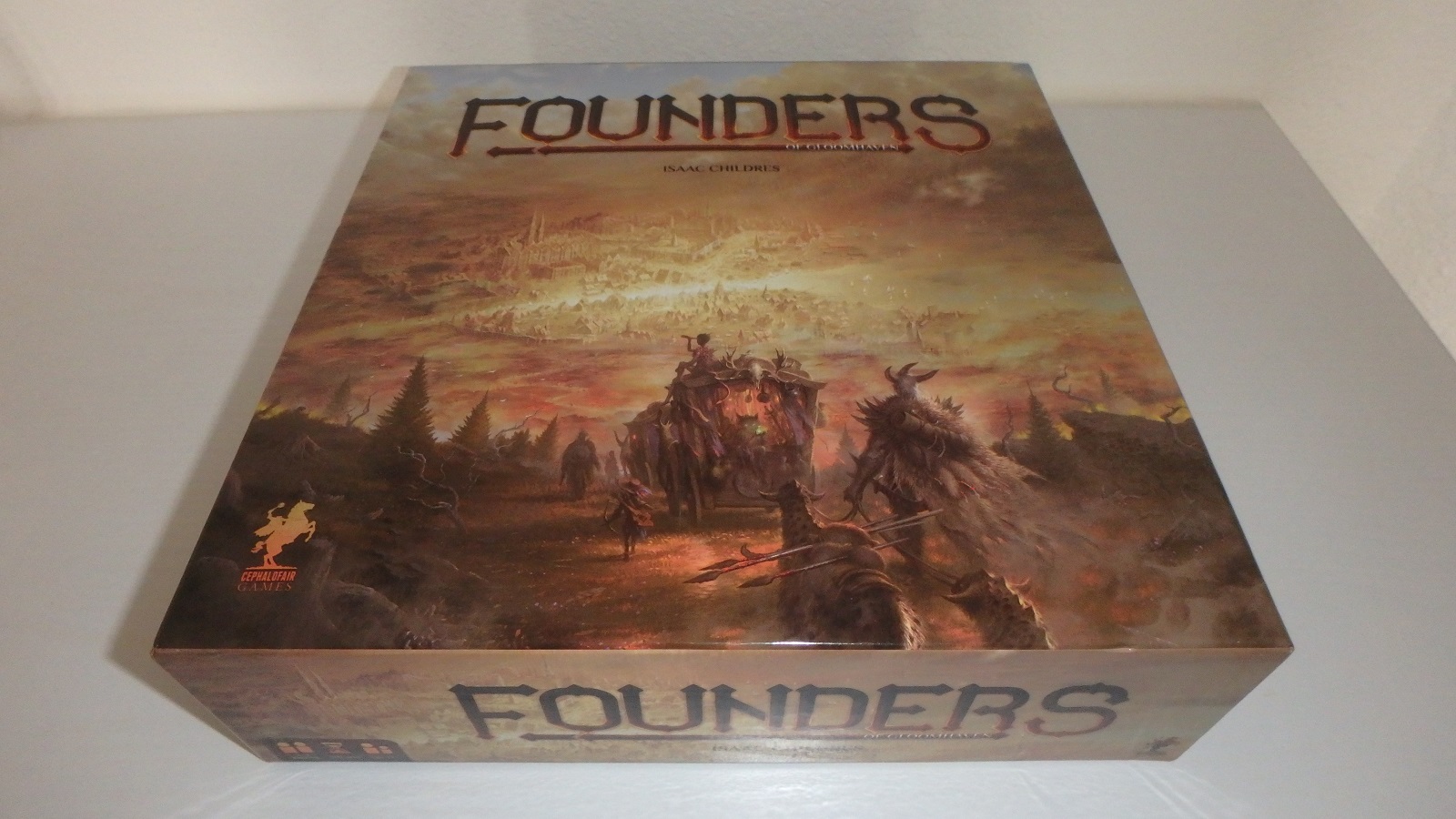 If you ask Board Game Geek (or certain people on this website), Founders of Gloomhaven is a flop. There are too many rules, which are all too fiddly. There are too many mechanics, which feel too separate and tacked-on. The art and colors are too drab and fail to properly communicate the information that they need to to make the game work. It drags on way too long for what it is, other games do what it’s trying to do better, and in less time. That’s fine, y’all are welcome to your opinions, obviously this game isn’t for you. It’s for me, Nicholas Dubbelyew, and I love it more than life itself. Let me tell you why.

In Founders, players take on the roles of hiveminds that dictate the actions of their selected fantasy species, as they come together to build the titular city of Gloomhaven. Just in selecting their species and other basic resource, players are already making an interesting decision. They can choose resources that are widely used, hopefully garnering a nice trickle of victory points through the game’s pyramid scheme of a scoring mechanic. Alternatively, they can corner the market on the tree for a couple advanced resources so they can keep those sweet VPs to themselves. As the game progresses, players import basic resources, create advanced resources, form a network of roads, and ultimately build the prestige buildings that provide hefty chunks of victory points and signal the end of the game. 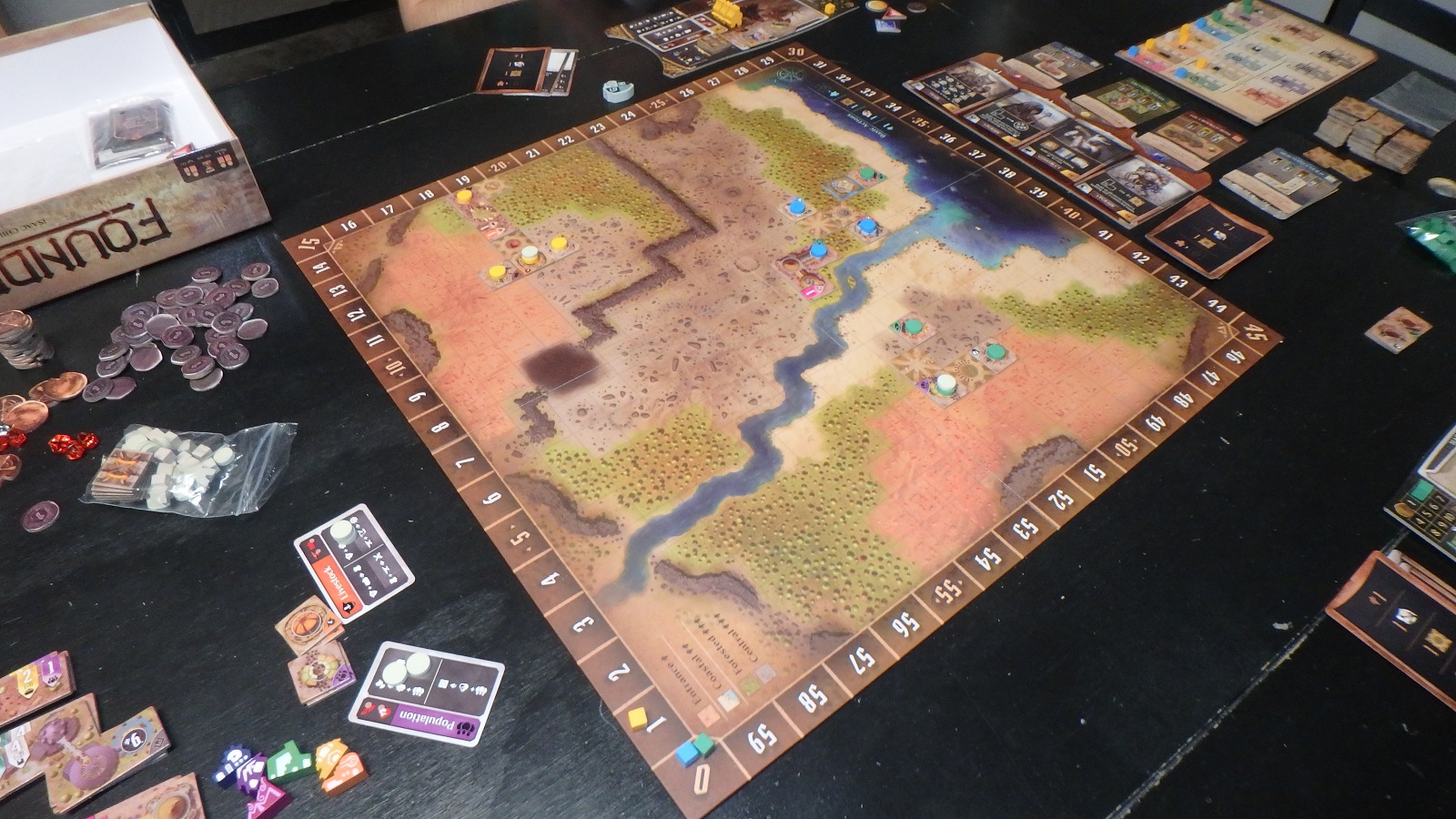 All of this is accomplished through the game’s action cards. On a player’s turn, they’ll play a card from their hand to perform anything from adding new buildings to the board to buying souped-up advisor cards from the market, and then everyone else gets to follow, either with a weaker version of the action, or one of the game’s four basic actions. Already, there’s interaction between players, trying to time actions where people can’t piggyback. Add in the fact that every single action will alter the game state, and Founders becomes a game about balancing efficient strategy and keeping yourself open to respond to opportunities. For example, let’s say Greg plays a Trade card on his turn, importing a basic resource next to yours which can be used for an advanced resource. If you kept your options open, you could follow his trade to buy access to his new resource, and then play your Upgrade card to build a road and beat Greg to building that advanced resource. You’re a genius, and Greg is a chump.

If all of this seems a little tense, that’s because it is. Thankfully, Founders comes prepackaged with little breaks, in the form of Call to Vote cards. Playing the Call to vote card initiates a cascade of rewards for everyone at the table- you get a little bonus for each card you had left in your hand, pick up your discard pile, and everyone else gets their income. But then a voting phase is triggered, and the crunchy city builder you’ve been playing gets tossed aside for a bit for a negotiation game. Over the course of the game, players will have been accumulating influence gems, and now they can spend them to vote for one of the three available prestige buildings, with the one garnering the most votes being placed by the player who contributed the most towards it. Since delivering goods to prestige buildings provides the lion’s share of Founder’s victory points, properly wheeling and dealing to garner support for a building that you need can make or break you. Of course, you don’t have to engage with this; if you see a prestige building that you just have to have you’re always free to call a vote early, grab influence with all the bonuses you get from the cards you hadn’t used, and force that building through. Problem is, if you let this become your strategy, not only are you sacrificing efficiency, you’re also showering your opponents with money from the income they get every time you call. 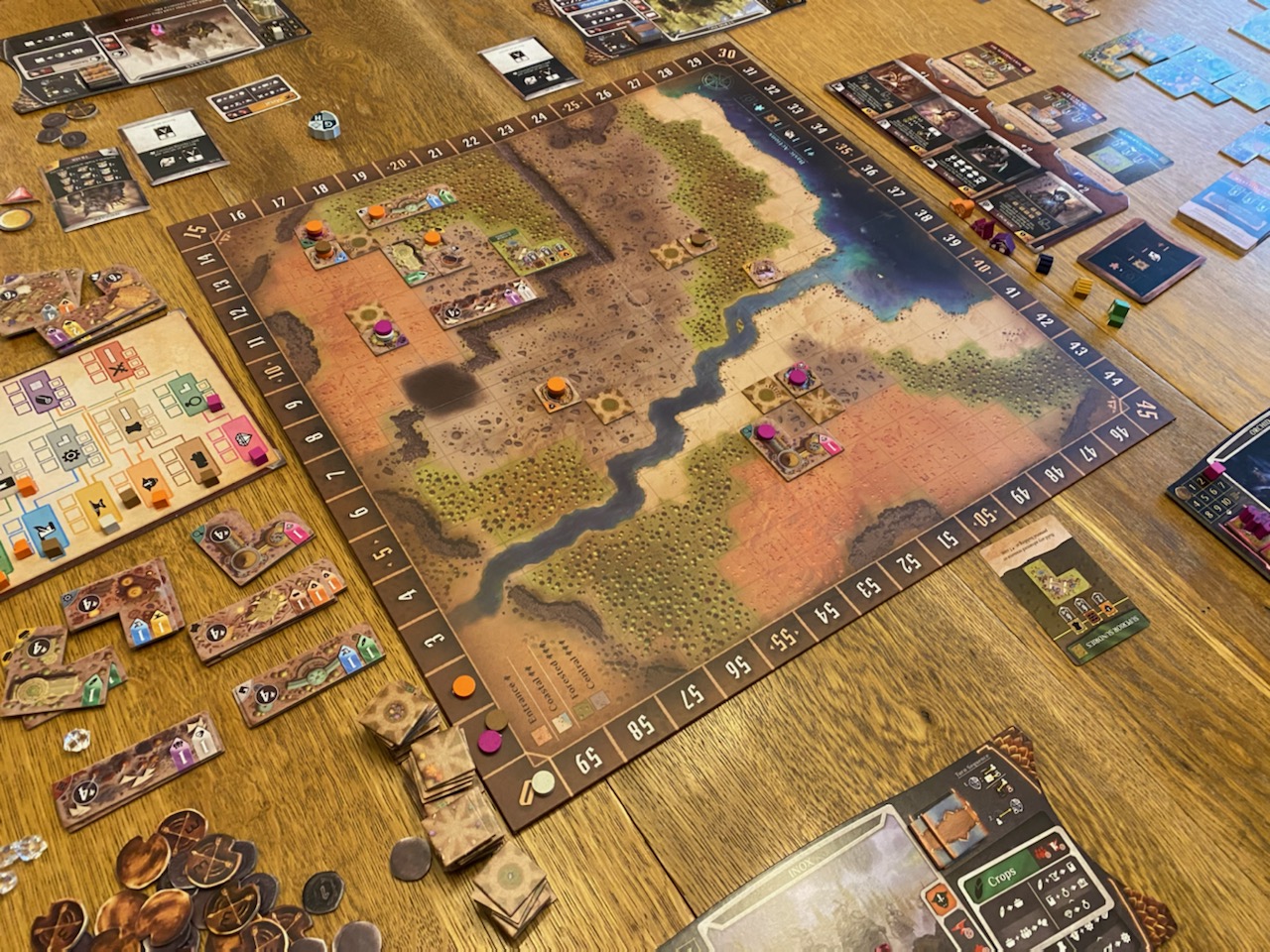 Remember Greg, who you so deftly outmaneuvered like a jet in a dogfight with a biplane? Well, in the interim, he’s bought access to that secondary resource you built, built a tertiary out of it, nabbed the absurdly strong card that no one else had a chance at, and forced three straight prestige buildings that it delivers to. Now he’s about to deliver to all of them, ending the game and scoring more points than you thought possible. Someone call Shyamalan, cause you were the chump the whole time.

And that’s why I love Founders of Gloomhaven. Similar to Polis, another of my favorites, Founders provides a framework where everyone can have their moment of glory, rewarding good tactical play where you recognize a great opportunity where an opponent left an opening, while still encouraging high-level strategy. Most games of this length and weight have bits where you feel like you’re going through the motions, but since Founders is so interactive, every choice you make feels like it has weight behind it.

Of course, Founders could very easily not be for you. The level of interactivity can make it feel mean, and if you’re not down to have something you’ve been working on for the past half hour blocked and appreciate the good play there, you’re gonna feel like playing this game is a Sisyphean task. I personally found the placement rules to be very intuitive and thematic, but I’ve had more people I played it with find them more confusing than not, and that’s pretty core to this game. Having somebody tell you the move you’ve been building up to is actually impossible and now you have to rework your entire strategy is never a good feeling, and that’s gonna happen a lot, for a bevy of reasons. But personally, I’ve enjoyed every second I spent playing Founders, and maybe you’re a weirdo like me.

Founders of Gloomhaven is unquestionably my new favorite game. The high level of player interaction and constant need to reshape plans feels extremely rewarding and enjoyable to me. However, literally no one else I've played this with has felt the same, so take that for what it's worth.

Nick grew up reading fantasy novels and board game rules for fun, so he accepted he was a dork at an early age. When he's not busy researching the intricacies of a hobby he'll never pick up, Nick can be caught attempting to either cook or befriend local crows.
Related Articles: Founders of Gloomhaven, Tabletop
Share
Tweet
Share
Submit