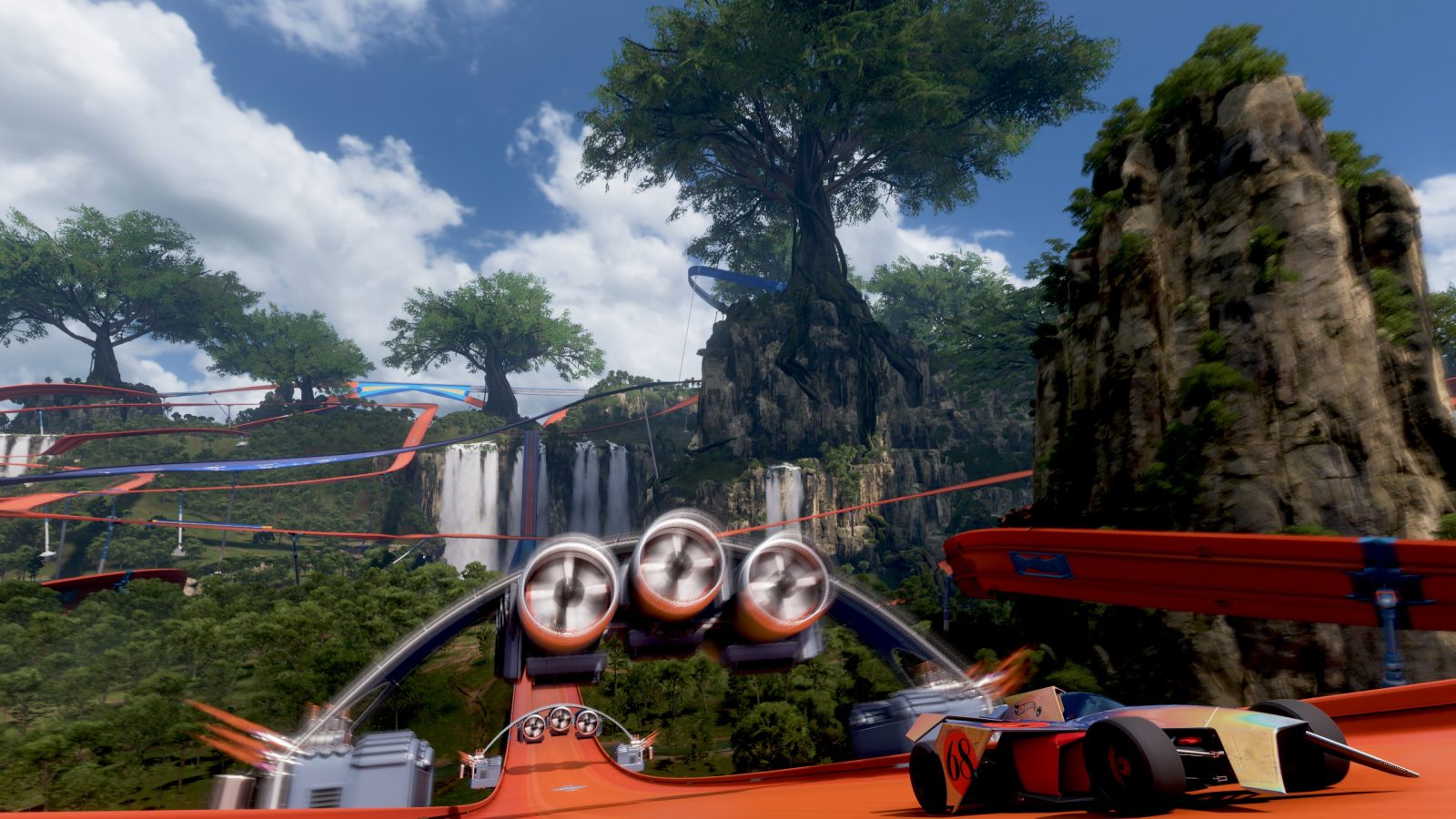 High above Mexico’s Horizon Festival lies a racer’s orange paradise. A life-size Hot Wheels track crisscrosses mountains, forests, and even a volcano. Here, you can achieve spectacular speeds and stunts normally impossible below. To once again become Horizon’s very best, you’ll need to master these new tracks and tricks.

Forza Horizon 5’s Hot Wheels expansion is a ton of fun. While I probably would have said that about just any addition to the game, it’s just intrinsically a good time, Hot Wheels adds something new to the arcade-y racing simulator. The base game’s campaign allows you to pick and choose what you want to do to progress, Hot Wheels asks you to master everything it has to offer to even get to the end. It’s an interesting and refreshing contrast that works well with the likewise more linear open world design.

Before we get into the nitty-gritty, let’s talk about the new zone the expansion takes place in. Hot Wheels Park is essentially a floating island with three distinct zones connected by the iconic orange tracks. In the north is the jungle/forest area, complete with waterfalls and gorges. Southeast is Giant’s Canyon, a mountainous area with tons of loops and corkscrews. Southwest is the Ice Cauldron, which frozen surface belies an underground inferno of lava. In the center of all of these is of course a hub that connects them all, while also providing its own unique set of driving challenges. While you can drive off-road in some areas, it can be difficult to find your way back on the track seeing as they’re mostly suspended in the air and have walls to prevent you from falling off. Thankfully, while you’re here fast travel is completely free and available from the get-go, so if you’re in a hurry you can just teleport wherever you want.

Hot Wheels introduces a few new mechanics inspired by the toys and playsets. At certain spots on the track, you’ll find gizmos that will boost your speed like, well, boosts and wind arches to reduce drag. You reach some incredible speeds even in slower cars, while the fastest will have you driving over 300 mph on a regular basis. You’ll need that speed to cross the gravity-defying loop-the-loops, and the upside-down vertical tracks too. While you won’t just fall off if you’re not moving fast enough (trust me, I tried), there is a minimum speed you need to achieve to get to the other side. To encourage even more death-defying driving, a new skill rewarding you for speeding at odd angles: G-Forza. 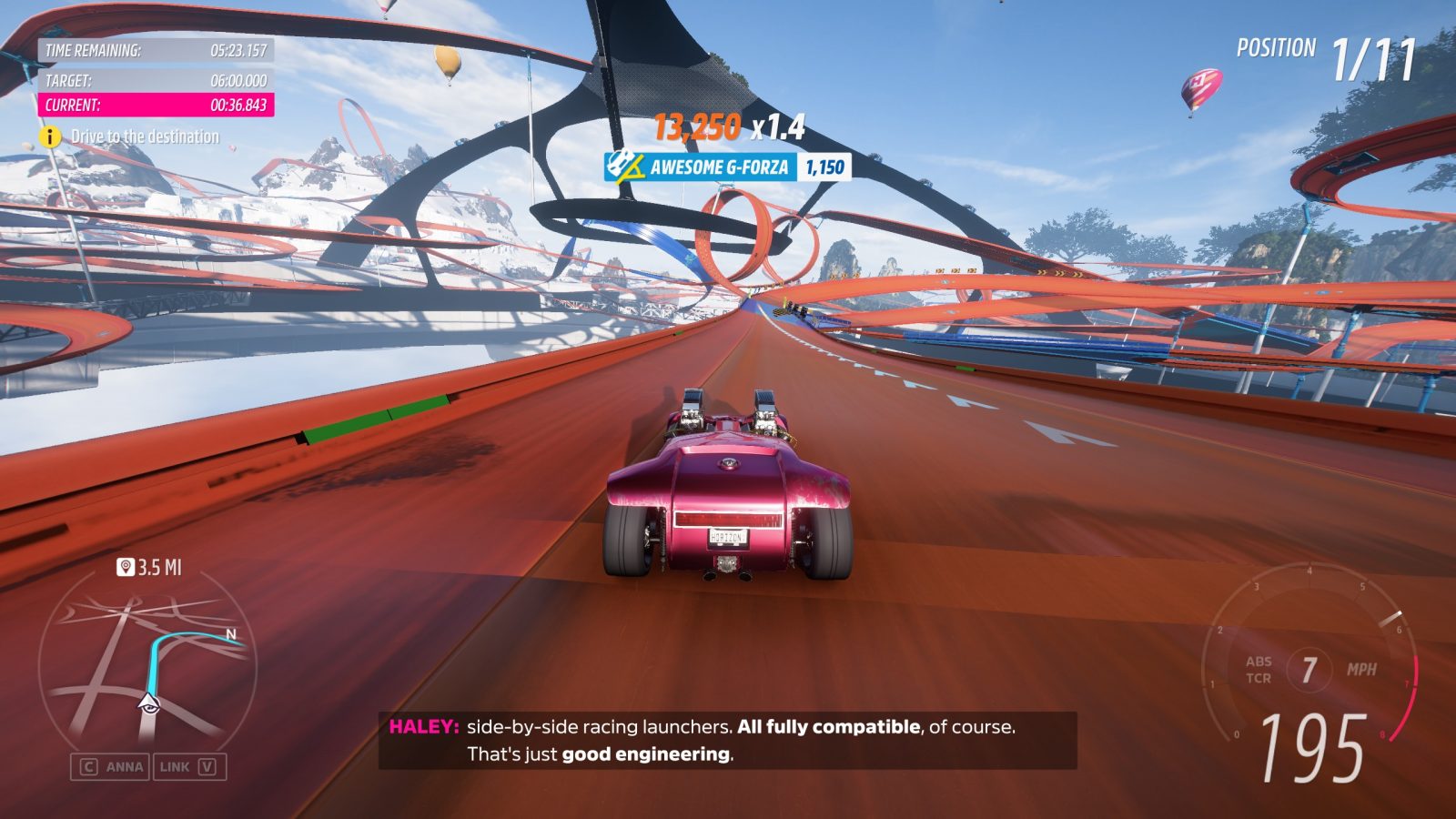 In addition to being a pun that is just *chef’s kiss*, there’s a new HUD element to keep track of which way is down and whichever way you happen to be driving. It’s neat and may even help some players with motion sickness, but does it have to be in the center of the screen? The brightly colored lines can be distracting in the middle of an intense race, and you only have the option of turning it on or off. As a result, I played most of the expansion with it off – a few different positions would have been appreciated.

Progression here is divided into multiple racing classes, each having its own set of races, challenges, and collectibles. Races and challenges are restricted to that specific class of car, but collectibles like smashing the balloons are available regardless. Completing missions in a class will earn you medals, and collecting enough medals will unlock a special event leading to the next class. Repeat this cycle a few times and you’re the Hot Wheels Legend. It’s not as easy as it sounds, however, as just completing everything isn’t enough to progress. 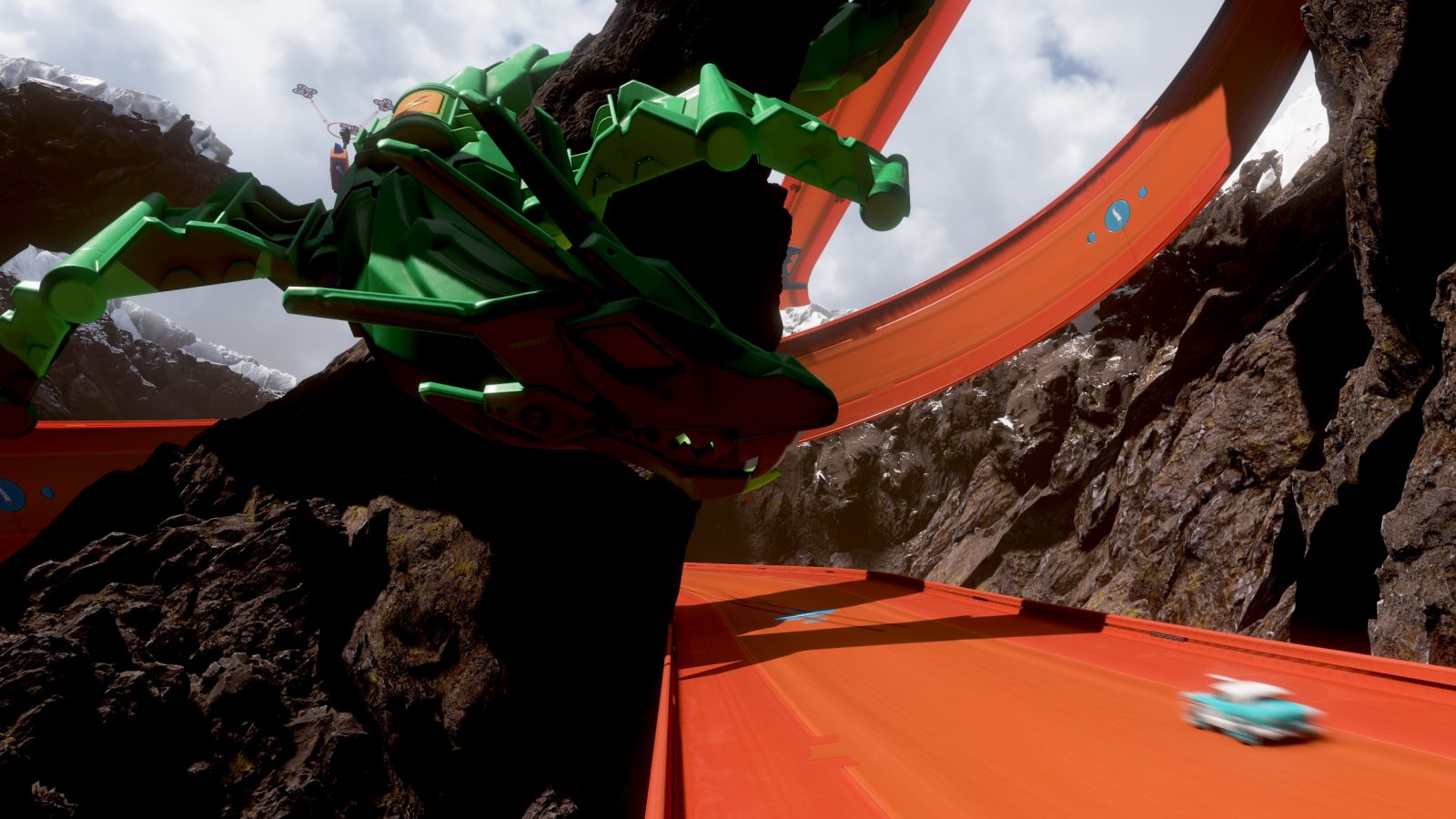 The majority of your medals come from a challenge present in every class: finish first in every race on Skilled Driver difficulty or above. As someone who likes to play these games on easy, this was a rude awakening. Instead of being a good distance away from the pack, I was suddenly faced with Drivatars right on my tail or, more often, just behind first place desperate for a chance to pass. I actually found the intended difficulty a lot of fun here rather than stressful or annoying, however. You have a lot less wiggle room here, so it demands you meaningfully engage with the new mechanics and course design. By the end, I even had to perfectly tune my car to even keep up (and by that I mean I downloaded someone else’s preset online because I don’t understand how cars work).

On top of all those new missions and challenges, Hot Wheels introduces a new racing story as you progress through, this one going over the history of the brand. The first of these missions was super interesting, with a particularly enthusiastic character telling me about the founding and why the toy cars were designed how they were. However, after that the story devolves into more of an advertisement than anything – the mission that was supposed to tell me why the tracks are orange ended a long tangent about something else with: kids like bright orange. You unlock a lot of stuff through this story too, which makes it feel like a corporate mandate instead of something the developers were genuinely passionate about like the rest of the game.

Forza Horizon 5: Hot Wheels is the perfect example of a small expansion. It takes a new spin on the Horizon formula while its core remains the same, incredibly fun arcade racer. The new open world is a joy to explore and master, but sadly it can feel too much like an advertisement frequently.

David is the kind of person to wear his heart on his sleeve. He can find positives in anything, like this is a person who loved Star Fox Zero to death. You’ll see him playing all kinds of games: AAAs, Indies, game jam games, games of all genres, and writing about them! Here. On this website. When not writing or playing games, you can find David making music, games, or enjoying a good book. David’s favorite games include NieR: Automata, Mother 3, and Gravity Rush.
Related Articles: Forza Horizon 5: Hot Wheels
Share
Tweet
Share
Submit