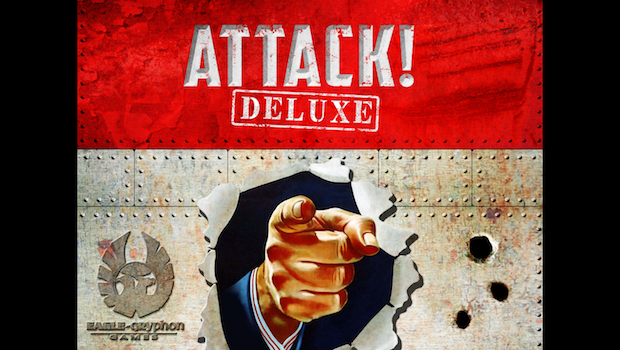 Everyone can remember the first time they tried something new, whether that be riding a bike, getting a job, or getting a car. If you’re a gamer, chances are you remember that first game that pulled you into the hobby. For me, it was Axis & Allies: my teen self scoffed at my dad’s collection of hex and counter games but was enamored with pushing dudes around on a map. Risk’s cousin may not be a heavyweight game, but it’s accessible and fun. Eagle Games follows that philosophy with Attack! Deluxe Edition, a significant expansion to its Attack! base game where two to six players battle for world supremacy using a variety of armaments.

Make no mistake that Attack! is the ultimate “dudes on a map” game. Attack! Deluxe adds dozens of submarines, destroyers, battleships, and aircraft carriers to the significant amount of infantry, artillery, tanks, and planes that populate the base game. The deluxe edition also adds a map of the Eastern Hemisphere, expanding the game to cover the entire globe. You’ll need a good sized playing area to fit everything on the table, but it looks fantastic once it’s all set up.

The game is set in a pre-World War II world, but this is not a simulation of that global conflict. You choose the location of your capital so a great power could start anywhere on the globe. The game is a free-for-all: temporary treaties and pacts may be enacted, but ultimately there’s only one winner which is determined either by victory points at the end of a predetermined number of turns or when the first capital falls. This is not a historical game, and even the co-designer of Attack! Deluxe admits that the game takes several historical liberties. The result is a game where balance is key, and fun is emphasized. Every player begins with a capital and an equal number of resources and units. Strategy and the luck of the dice, determine the outcome rather than the predictable nature of the original Axis & Allies.

Picking your location and expanding your power may sound similar to the game Risk, but Attack! Deluxe adds several features that give the game a more strategic feel. You can choose to move, blitz, navigate, transport, negotiate, burn, or build during each action. Years are comprised of actions which coincide with the four seasons, though movement in winter requires expending extra resources.

As you would imagine, attacking is the heart of the game. You can’t simply roll over empty territory enroute to another nation, so there’s no downtime before major power collide. Instead, each neutral territory contains a garrison that must be defeated before you claim the territory. The deluxe edition also allows you to claim neutral land through negotiation. Negotiation costs resources, but it allows you to not only gain the territory but action cards as well. Action cards are powerful  bonuses that can affect battles and research. While there’s not a lot of tension in neutral battles, it is a nice touch that prevents someone from expanding too rapidly.

Major powers can begin anywhere on the map that’s near an ocean or sea.

The tension lies in player versus player battles. Once two armies meet, you and your opponent select four units to fight in the opening round. Artillery, or submarines in naval engagements, get a preemptive shot if they’re included the opening round. Each subsequent round adds another unit from the reserves until one side has had all their units eliminated. Five units are in the second battle round, six in the third round, and so on. Dice are used to determine which units have hit. If you have four infantry and a tank, but roll two infantry, two planes, and an artillery, then you scored just two hits. The base Attack! Game suffered from clunky naval battle rules, but that has been replaced in favor of the system used in land battles. This is a great upgrade and really makes navy an important part of the game.

Each unit is unique and deciding how to balance the different units in your army is important. Tanks and artillery may be no more effective than infantry in terms of hit percentages, but each allows advantages in battle not afforded to your grunt soldiers. The naval units offer even more options with submarines firing first and battleships providing great firepower to go with enhanced transport capabilities. Carriers are the game’s most expensive units, and as such have the greatest bonuses. Each carrier rolls two dice, one for itself and one for its intrinsic air support. The only thing missing from the new navy units is the ability to bombard shoreline territories.

Combined arms can be useful since different units have unique capabilities.

Units’ abilities remain static throughout the game, but how your empire produces and moves those units can change depending on how you research. With the research action, you can invest in factory upgrades that allow you to build units in regions other than your capital. Mineral research allows you to build more advanced units (tanks, planes, battleships, and carriers) per turn. Transport research allows you to push your troops to the front faster. Population is a special research card that earns additional victory points at game’s end and allows you to draw an action card. The final research is oil production, which is an extremely important commodity.

Oil serves multiple purposes. It can be used in conjunction with production to buy troops which can help fund a larger war machine. More importantly, oil is needed if you wish to move during the winter turn. It takes five oil certificates to do one action in the winter. Gaining a bonus action each year can give you a significant advantage, so researching oil production is vital to your long term success. The game may not be historically accurate, but it’s nice to see the most valuable 20th century resource play a key role in the game.

After playing the base game to Attack! I was somewhat underwhelmed. There was plenty to like, but several mechanisms didn’t click. Attack! Deluxe fixes a lot of that. The bigger map adds options and replay value. The massive amounts of units allow you to build an army to fit your playstyle. Research and action cards give the game just enough depth to make it an excellent gateway between basic war games and meatier fare. You will need the base game to play the Attack! Deluxe expansion, though you’ll never need the base game box again since everything from both fits in the newer one. If you already have the base game, then the deluxe version is a must buy. If you don’t, just be aware that even discounted, it’s a $90 investment at least. Still, even with a fair number of quality “dudes on a map” type games, this deserves to be on your shelf.

Attack! Deluxe takes the original game and adds dozens of new units, cleans up some rules, and improves sea combat. It may not be historically based, but the units give you a feel for the era of World War II. The price may scare some off, but if you enjoy lighter war games, this is one to have in your collection.