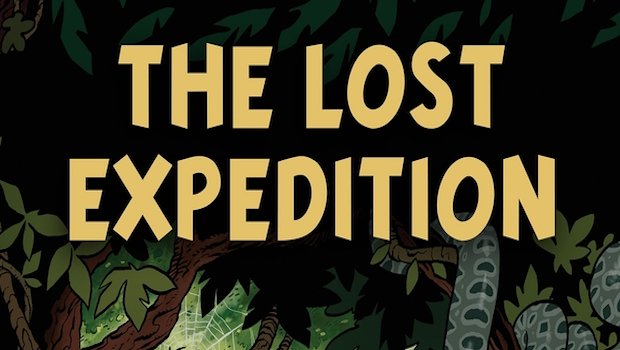 Nearly 100 years ago, famed British explorer Percy Fawcett set out into the Amazon rainforest in search of the city of Z, Fawcett’s name for the ruins of the mythical El Dorado, and was never heard from again. Many went in search of Fawcett’s lost expedition to no avail, and today, his disappearance remains a mystery. Osprey Games has used this real life Indiana Jones story as the backdrop to their recently released card game, The Lost Expedition. You will help lead a group of explorers through the Amazon in search of Z and accomplish what Fawcett couldn’t.

The Lost Expedition can be played solo or cooperatively with up to five players. Either way, you and your teammates will be in charge of three explorers. Your goal is to get at least one of these explorers to Z before they all die. Each explorer has an expertise that can be useful as your wind your way through the dense rainforest. One explorer will be experienced at camping, one in navigation, and the other in the jungle itself. These skills are depicted on the explorer’s card using symbols. There are only a few symbols used in the game, and it doesn’t take long to memorize what each means.

From the outset, you will find your team’s health and resources are precarious.

Osprey allows players to scale the difficulty to their choosing and how you start determines both the length of your journey and the amount of health and resources you have at your disposal. Resources include food to keep you going and ammunition to ward off the numerous dangers the jungle will throw at you.

Your path to Z is laid out on the table using cards sequentially to make a map. The map cards, like all the others in the game, are oversized and brightly illustrated. The thick canopy and meandering rivers that cross your path give you a sense that this expedition will not be an easy one, a great foreshadowing on the perils that await you. A meeple representing your team is placed on the first card and your journey begins.

The game is played using a deck of adventure cards. The adventure cards have titles that are named for the encounters you may have on the way. Some are good, like discovering an abandoned camp or finding animals to hunt, but most are bad including running into dangerous predators or being ambushed by unfriendly locals. The wonderful comic book style artwork really immerses you into the theme, and the use of the explorers on the cards feel like snapshots of their journey. There’s a terrific sense of adventure throughout.

In the morning, the order of your events is set.

On every card are symbols that will tell you what may happen to your team during that encounter. Symbols that are darkened means your company gains that particular resource or expertise. If it’s a resource, you collect the number equal to the amount of darkened symbols on the card and add to your supply pool. If the symbol is one of the three expertises, then you take the card itself to be used later.

More often than not, you will find that the symbols on the card are not dark. These symbols mean you may lose resources or must spend expertise. Ammunition is often spent in encounters with wild animals and is the most precious commodity in the game. Food is used often but can generally be replenished. If your food supply is exhausted and you must use food, you will lose health instead. Some encounters may have you lose health directly, especially against the game’s largest predators.

Losing expertise can be just as devastating as losing resources, but you do have some options at your disposal. When forced to expend an expertise, you may discard one of the cards you’ve collected that has the darkened version of the same expertise symbol. If you don’t have one, then you can either take one health off the person who has that expertise or two health from someone who does not.

In the evening, you get some flexibility in card order which can help you avoid bad events.

Not all actions are automatically triggered by the symbols. Instead, symbols are divided into yellow, red, and blue colored boxes. Symbols within a yellow box must happen, which means you will automatically gain or lose a resource or expertise. Red boxes force you to make a decision and are the most crucial part of the game. There are always multiple red boxes when they do appear on a card. One of the boxes must happen, and this is where careful resource management comes into play. For example, if you run into the mighty anaconda, you have three choices: lose two health, lose one ammunition to gain one food, or lose one ammunition to gain one navigation expertise. You would think shooting the beast to gain food would be the easy choice, but there are far more enemies in the jungle than bullets in your gun. Blue boxes work just as the red except that they are always optional. They generally give you a resource benefit at a cost of expertise.

Each turn alternates between morning and evening and those play differently from one another. During the morning, you and your team will take turns selecting cards from your hand and laying them on the table. Cards have numbers on them and the morning turn has you place the cards laid in numerical order. Once you’ve selected enough cards to plan your day, you progress from lowest number to highest, completing the task(s) set on the cards. While the order is rigidly set, you may encounter some card symbols that will allow you to alter the order. Some cards make you to skip the next card in the sequence while others will let you swap two cards in the order if you choose. This can be helpful if you want to place a rather nasty card directly behind one that would let you skip it. Also, some cards will force you to add another card to the end of the row, or if you are lucky, take one off. The progression through the cards represents your actions that morning. At the end of the morning, you spend a food to represent stopping for lunch.

In the evening, you get a little more flexibility in your card plan. Now you and your team will set cards down regardless of number. Cooperation really plays a role here because although you cannot tell your teammates which cards you have, you can discuss tactics to help players determine the optimal card order. Once the remaining cards in your hand have been played, you progress through the evening just as you did that morning. At the end of the day, you draw a new hand and expend another food.

Progression through the jungle may occur when you get the symbol of a hiker. You can only win the game by reaching the end of the path to Z, so you will need to progress at some point. Progression will always cost you something whether it be resources, expertise, or even the death of one of the explorers! You never are forced to choose progression, but time is not on your side. The longer your expedition goes, the wearier it gets. Resources will dwindle. Health will falter. You will lose explorers. If you cycle through the deck twice, you lose the game, so knowing when to take risks will determine whether you succeed or not.

If the game sounds brutal, that is because it is. You will die. You will fail. While difficult, the game is far from impossible. You will need to manage your hand and resources carefully to survive and you must move through the jungle at a reasonable pace. Since it is a card game, the luck of the draw will be against you at times, meaning you will die no matter what strategy you choose. This may frustrate some players, but the game sets up so easily and quickly, you can jump right back into another game.

Jumping back in won’t be a problem either. As stated, the artwork is phenomenal. Even the slightly faded color of the resource bits give you the sense of an early 20th century adventure. Each explorer is modeled after a real life adventurer from the time period. You’ll see illustrated likenesses Teddy Roosevelt and others that really give the game some flavor. The game moves along quickly, but you’ll find yourself perplexing over challenging decisions time and time again. It’s extremely satisfying to make it to Z, but this game really is as much about the journey as it is the destination.