Memories are, arguably, what makes people people. Things that happened to us in the past shape who we became in the present, even if you forget certain events they still had a hand in defining your personality. Final Fantasy Crystal Chronicles is a game about those memories, both remembered and forgotten. Back on the GameCube in 2003, it was made solely out of a deal with Nintendo to allow Square to re-release Final Fantasy games on the GameBoy Advance. As such, it’s a bit of an odd duck in the franchise. While most other Final Fantasy titles focus on telling an intricate story with complex characters, Crystal Chronicles is very much nonlinear and leaves the plot for you to figure out on your own with some hints from a cast of vaguely defined characters. It also had a focus on multiplayer that very few people got to experience to the fullest; it required up to four players each with a GBA and link cable. Now with the Remastered Edition, SquareEnix seeks to make this process of playing together much easier (and much less expensive) with online multiplayer, while also adding some quality of life and new features while they’re at it.

I already covered the game’s basic setup in our preview video (which you can view above), but let’s quickly go over it here just in case. In Crystal Chronicles, you play as a member of your hometown’s Crystal Caravan who go out into the world seeking myrrh to restore the crystal’s energy and keep the deadly miasma that covers the land at bay. After a skippable tutorial from Stiltzkin, you’re let loose to explore new dungeons as you please. As you travel, you’ll randomly encounter other caravanners who you can strike up a conversation with. After you collect three drops of myrrh, you return to home, party hard as the game recounts all of that year’s journal entries, and set out once more the following year to do it all again.

When in dungeons, you can move around with either the control stick or D-Pad and use whatever command you have selected with X on PlayStation or A on Switch. By default, you start with only the attack and defend commands and can assign new actions in the menu, which is much easier to navigate. With the attack command you can perform a three hit combo by pressing the button in rhythm or hold down the button to do a focus attack. Assigning magicite, which is dropped by enemies and disappeared upon leaving the dungeon, allows you to cast spells like Fire, Blizzard, Thunder, Clear, Cure, and Raise. In single player, you can place two spells next to each other on the command list to have the option to fuse them and cast new, stronger spells like Firaga, Haste, or Holy. In multiplayer however, players will need to cast the spells on top of each other at the same time to fuse them. 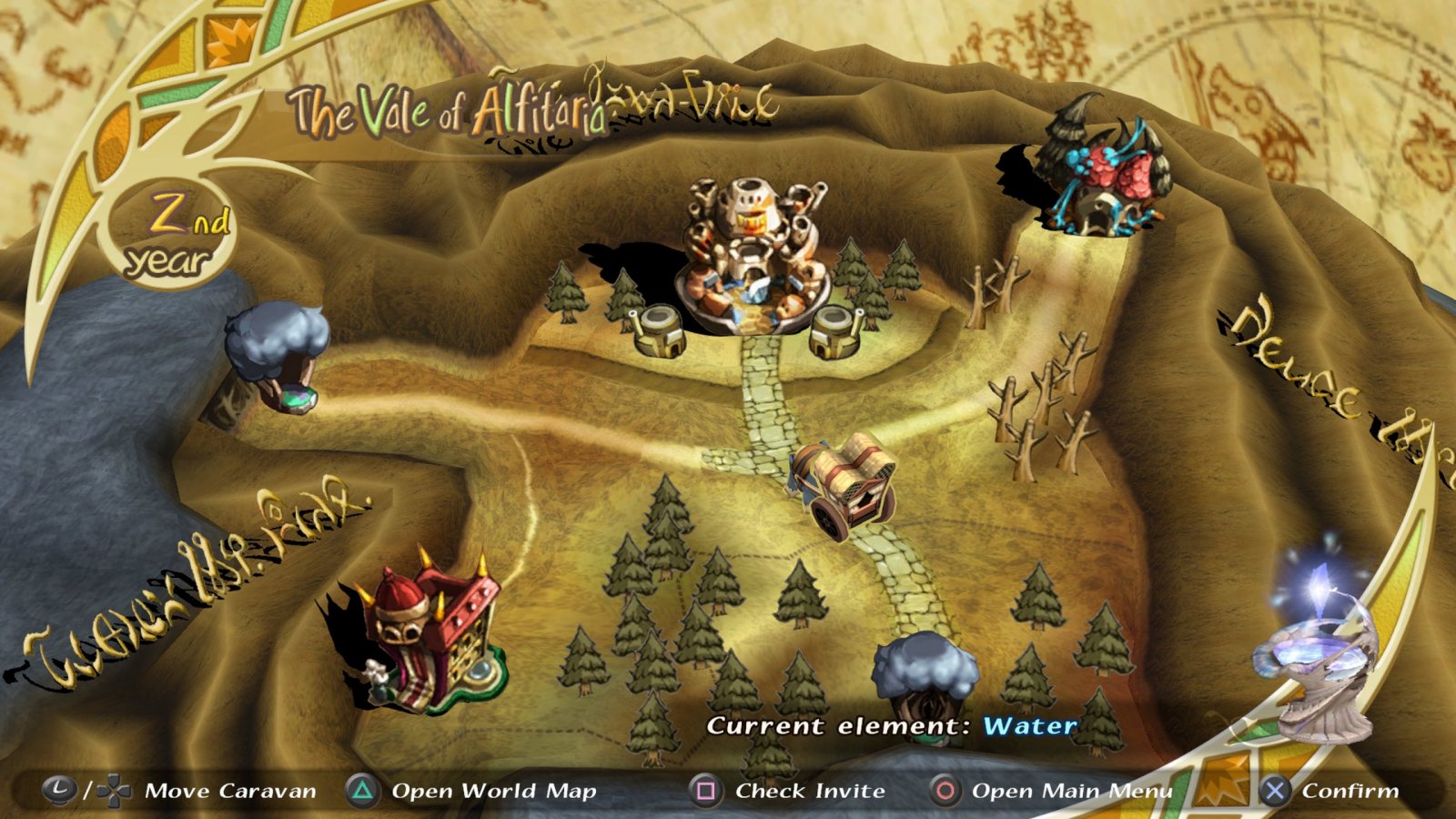 As you explore an area, you’ll solve puzzles, defeat enemies, and collect items like crafting materials and relics before fighting that dungeon’s unique boss. After defeating the boss and collecting the myrrh, each player’s points gained front their hidden objectives are tallied and whoever has the most gets first pick at one of the relics found along the way. Objectives can vary wildly from simply dealing damage to picking up money, which can make rankings feel a bit unfair if your objective was to fuse magic and other players wouldn’t cooperate with you. Relics are stat increasing items, such as gaining 3 strength, getting another heart, or adding a new slot to your command list, which become permanent when chosen after a dungeon. These increases may seem small at first glance but they add a lot to both character customization and the feeling of progression.

It’s an engaging gameplay loop that can keep you playing long after the credits roll, if you can figure out how to make that happen, with dungeons that change in subsequent visits. In this Remastered Edition, you can enjoy some great voice acting in encounters with other travelers, a ton of new dungeons, improved graphics, and the aforementioned new dungeons. In addition to new character designs for each race and gender, you can mimic the appearance of NPCs by collecting a set of Moogle Stamps, one of which is hidden in each level. While I’m pretty attached to my character, a white mage-esque Clavat Female, it’s an interesting addition that I used once or twice on repeat dungeon runs. It does come with quite a few annoying restrictions though, you can’t mimic a character who isn’t the same race and gender as you so after collecting all of the game’s stamps I had exactly one character I could mimic. The options are also uneven per race: Clavats have 7, Lilties have 11, Yukes have 4, and Selkies have 5. To make matters worse, you can also purchase almost all of which are Clavats. As a side note, the minigame you could unlock my collecting a set of stamps has been removed, and there doesn’t seem to be a reward for filling out your collection. 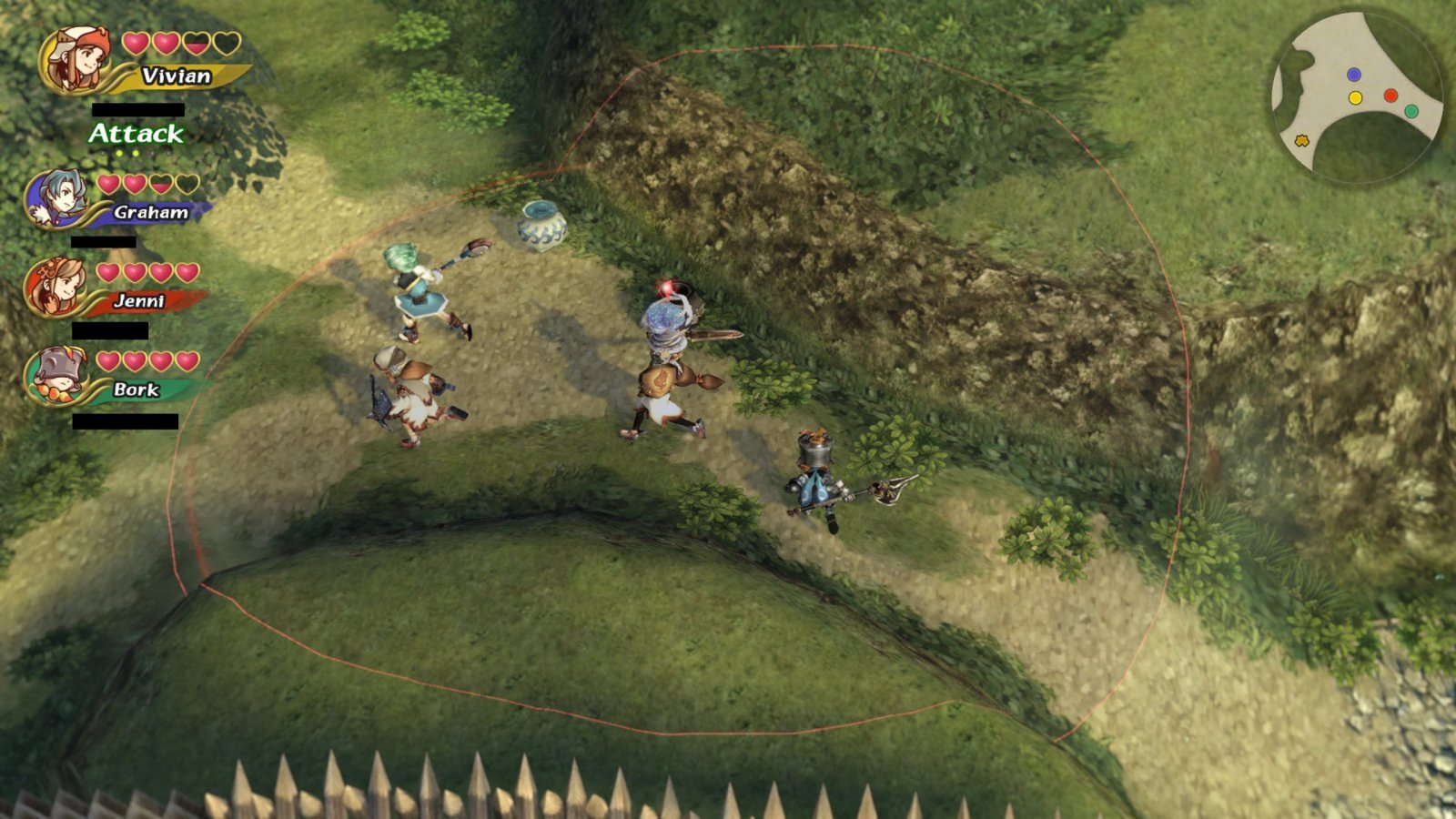 Before we go into the new content, the base game has seen a few changes. The first thing you’ll notice upon starting a new game is that the opening has been rerecorded and compared to the original it’s… not good. The instrumentation feels all around weaker and Donna Burke’s vocal performance is just awful. The lyrics no longer follow the melody of the song and have a ton of weird and unnecessary flourish, like a singer trying to put their own spin on the American National Anthem. Every other song that has been redone, like Eternal Blue Skies and Moonless Starry Night, have fared far better thankfully. The new tracks are equally as excellent as the rest of the soundtrack too, so the new version of Morning Sky is a blemish on what is otherwise one of the best soundtracks in anything ever.

Before you can get to the new content, you have to beat the main story. At a minimum without repeating any dungeons, you can get to the final area in 5 in-game years but in all likelihood it’ll take about twice that. Not because getting to the endgame is that hard, but because the gauntlet that is the final dungeon is ridiculously difficult. Enemies hit harder and more frequently, so if your stats from collecting relics in other areas aren’t up to par you’ll probably be stun locked to death. To beat the game and play some of the new dungeons in time for this review, I brought about 40 phoenix downs, which revive you upon death, and had used about half of them by the time I was done. The actual boss itself isn’t too difficult, but actually getting there is the most difficult challenge the game presents, including the new post game dungeons. I do wish they scaled down the difficulty here, because the new content presents the right amount of challenge for a character who has just reached the finale.

Finishing the game will unlock all of the new dungeons, which aren’t entirely new. For example, the first one I encountered was River Belle Path in fall instead of spring. While the levels themselves don’t change outside of aesthetics, what’s in them is completely different. Enemies are newer, stronger, appear in more dense groups, and drop loot much more frequently. Here is where you’ll hear the new renditions of the dungeon themes as well as a new boss theme. Speaking of, the new bosses are similarly remixed from the original. To continue using the first dungeon as an example, the Giant Crab is now blue and casts Stop instead of Slow in its first phase. After removing it’s appendages, it’ll start moving around quicker and casting Slowga and Thundaga. While it’s a bit disappointing this isn’t entirely new content, it is a lot of fun to revisit all these places I know so well with tons of new surprises.

The most significant addition is the online multiplayer. While it is much easier to play with others now, it comes with too many restrictions and annoyances to completely replace the original. To start playing with others, you open the menu on the world map and select “Set Out Together.” From here, you can host a game by selecting a dungeon, join another adventurer’s lobby or game already in progress, or join a random game. Once you’ve finished the dungeon, from which only the host gets the myrrh, you have the option to either run the dungeon with the same party again or disband. There is no way to explore the world map or towns together anymore, nor can you keep a group together between dungeons. The game also uses its own friends lists, since it’s cross platform, and to add someone to your list without playing with them first you have to send them your friend code. While the friend system is extremely cumbersome, there’s no real use to it as of writing. You’re supposed to be able to send and receive invites, but from the tests I’ve done this just doesn’t work, though this may be fixed before release as I didn’t have access to the day one patch.

While playing with other people is still very fun, I encountered a ton of connection issues. Other players would regularly teleport around and I got disconnected more than a few times. This makes things like fusing magic to create stronger spells almost impossible, though there is a QTE now to make sure both players cast at the same time which helps a bit. In one instance, my attacks on the boss didn’t register for a bit, then removed about half of its health bar all at once when I casted cure on my co-op partner. When hosting a game, for some reason you can’t have Mog carry the chalice for you until someone joins so you’re stuck carrying it yourself, which makes me less inclined to host games in addition to the connection issues. Your results may vary depending on the strength of your internet connection, but every single match I had played out similarly.

Crystal Chronicles Remastered Edition is an almost great update on the original. While the game itself is still fantastic and the new content is fun, the online only multiplayer leaves a lot to be desired in terms of quality and features.

David is the kind of person to wear his heart on his sleeve. He can find positives in anything, like this is a person who loved Star Fox Zero to death. You’ll see him playing all kinds of games: AAAs, Indies, game jam games, games of all genres, and writing about them! Here. On this website. When not writing or playing games, you can find David making music, games, or enjoying a good book. David’s favorite games include NieR: Automata, Mother 3, and Gravity Rush.
Related Articles: Final Fantasy Crystal Chronicles Remastered Edition
Share
Tweet
Share
Submit