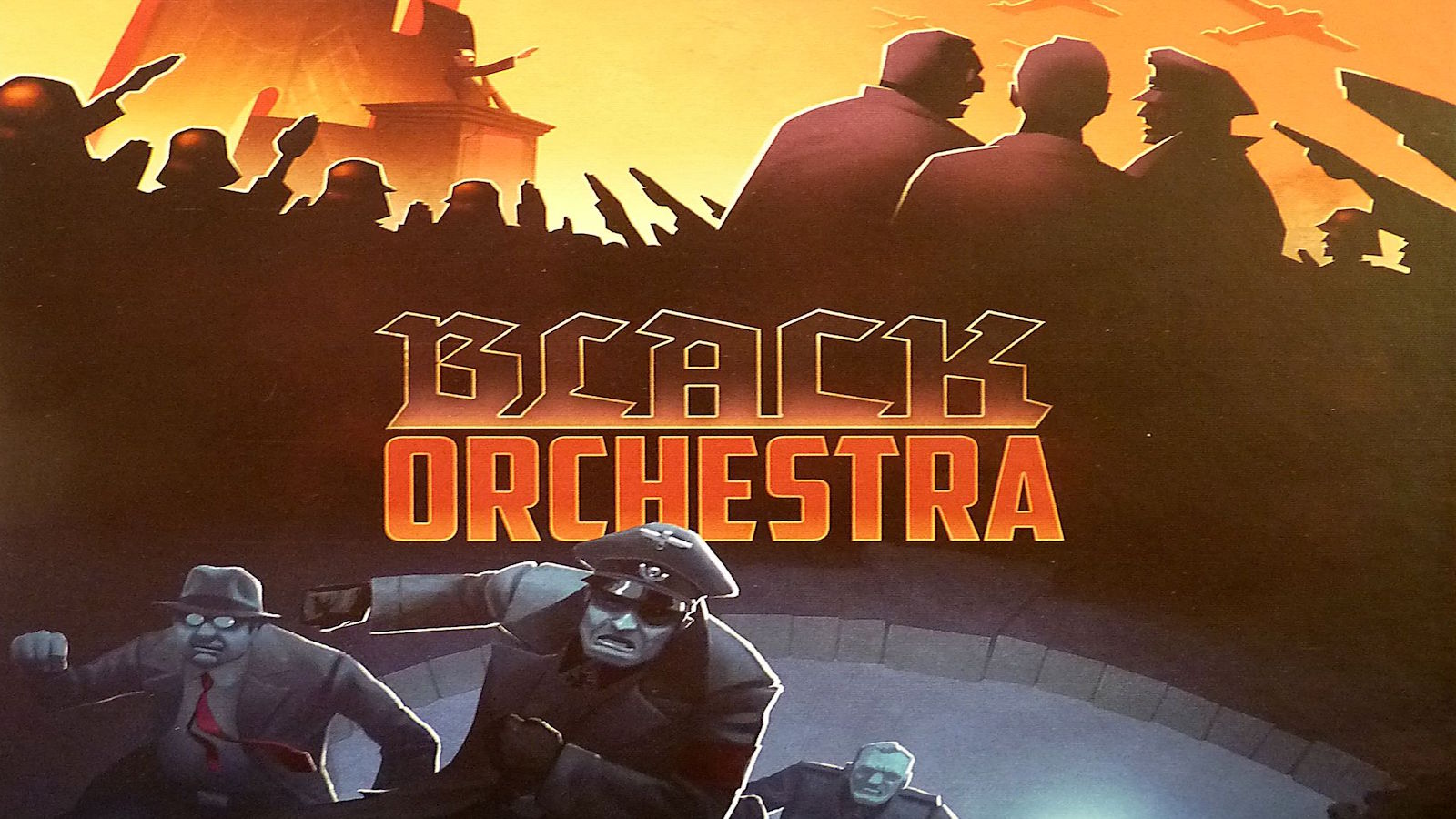 As the tide began to turn against Germany in World War II, a group of officers, agents, and leading civilians realized Adolf Hitler needed to be removed from power, either by overthrowing or killing him. These conspirators were dubbed the Black Orchestra, which makes an apt name for a game with such dark undertones.

You take on the role of one of the main conspirators in a cooperative game to eliminate Hitler. The game spans the length of the war, from the expansion of Germany’s war machine to its eventual demise at the hands of the Allies. Your goal is to develop a plot and execute it before either the game ends or all of the conspirators have landed in prison.

You begin in the Berlin Train Station where you can then travel through the city, the countryside, or beyond.

Your character board contains two things that will be vital to your success. The first is motivation, which begins at its lowest level, timid. Your character must raise their motivation enough to be willing to carry out plots by being committed against Hitler. Higher motivation can also unlock your character’s special ability to aid you along the way. Meanwhile, you must also carefully monitor the suspicion level of your character. High suspicion can greatly reduce the chance of plots resolving successfully, and the highest suspicions will land you in prison.

It’s not a lot of management, but it is important and something you’ll have to think about at every turn. What is interesting is the game rewards you for taking chances. You’ll find yourself pushing the suspicion envelope to accomplish some of your goals. The game does an excellent job of balancing risk and reward.

Managing your commitment and suspicion levels are keys to the game.

You and your fellow collaborators begin at the Berlin train station. From there, the wonderful mounted map board offers you the option to travel to locations within Berlin or to cities scattered throughout Germany and beyond. The board is a living one that changes as the game progresses. Some locations are not available until Germany has conquered them and many of those will become unavailable again as Germany loses them in the war’s waning months. It’s subtle, but it’s an interesting way to show the rise and fall of the Third Reich. Also added to the board are markers indicating where Hitler and his top officials are located.

Each turn begins with a check of where you are in relation to Hitler and his cronies. Beginning a turn in the same location can penalize you in different ways. The baddies hop around on the whim of the event cards you draw at the end of your turn, so you may not realize they’ll be with you until right before you turn begins.

Your chances of executing a successful plot improve when you can collect the optional items from the plot card.

The heart of the game is the action sequence. You’ll have three actions each turn, but you can add to that through the game’s conspire action. With conspire, you roll dice equal to the number of actions you have left in your turn, so you’ll roll three if it’s your first action. This is nearly a must do every turn as the payoff greatly outweighs the negative possibilities. Most likely, you will roll a number. The sum of any numbers rolled is how many extra actions you have each turn. This is phenomenal as you can increase your actions from three up to around ten with a fortunate roll.

Less likely are the crosshair results. Any crosshair results are kept in the corner of the board. Collecting three among all players will allow you to either raise any conspirator’s motivation by one or lower Hitler’s military support by one. Both are vital to an eventual plot’s success. You know plots cannot be triggered without a certain level of motivation, but plots are also doomed to fail if Hitler’s military support is strong. Plots are not likely to succeed when the Wehrmacht is rolling.

With or without the bonus from conspire, you’ll spend much of your actions collecting cards or items that can aid you in your mission. Conspirator cards can be drawn which can unlock plots or one off actions. Plots must be collected to win the game. They can involve a sniper attack, planting a bomb, or even a kidnapping. Regardless of which you draw, you’ll have one required element that must happen for you to carry out the plot, which usually involves Hitler being in particular locations on the board. You’ll also have a series of optional elements you’ll want to collect as well. Every element you have for plot adds a die to roll when you are ready to execute the plot. Naturally, you are more likely to succeed with a well-planned plot than one that has only an element or two collected. The one off actions can help you manage motivation and suspicion along the way, They can also provide re-rolls or extra dice to your plot attempts.

There’s a great sense of accomplishment when you win the game.

You can collect the items you need by using actions to move to new locations and additional actions to pick up items. Explosives, maps, weapons, and other devious items are hidden across the board and must first be revealed using yet another action. Items do not necessarily need to be used as plot devices, but they can also be delivered to other locations to help lower the suspicion of you or other players. There’s a finite number of items at your disposal, so it pays to be careful using them to lower suspicion. Still, it’s a great way to quickly take the heat off if you need it.

You can only carry so many cards and items with you, and this is where the cooperative nature of the game plays its role. Conspirators in the same space can transfer items between them. This can allow you to set up one conspirator as the lead in a plot attempt, making sure they have the items and cards needed to carry out the mission to maximum efficiency. Other players can take on a supportive role, holding cards that can be played at any time (such as the re-roll card). Thus, teamwork is paramount to winning the game, but it also means the game’s difficulty scales down as you add more players. You may inevitably cycle through the game more quickly, but I found that a three player game was much easier to win than a two player one. You can offset this a little by changing the game’s overall difficulty, which is controlled by how low Hitler’s military support can go.

At the end of the turn, you’ll draw from one of the event decks. There are seven in all, and you’ll progress through the eternity of one deck before progressing to the other. Event decks will move Hitler and his cronies around to different locations, and they’ll also manipulate military support. While you will shuffle and remove two cards from each deck prior to planning, you will find the more you play the more predictable Hitler’s movement pattern will become.

The Gestapo will become a worry as the game gets into the later event decks. Gestapo raid cards begin popping up to cause havoc to your gang. Those at the highest suspicion level are sent straight to prison. Some of the more valuable conspirator cards are considered contraband and must be discarded, or you’ll be forced to raise your own suspicion levels. Going to prison is essentially a wasted turn. You’ll draw from the interrogation deck, where you’ll be forced to make a decision from a set of options without the consultation of your cohorts. You’ll generally get to go free, but it may cost you or your allies something in return.

Eventually, you’ll be ready to attempt your plot. A plot attempt takes one of your actions, and then everything you worked hard for comes down to a single dice roll. Every crosshair rolled is a success, and your plot succeeds if you have a number of crosshairs equal or more than Hitler’s current military support. However, if you roll iron eagles equal to the number shown on the plot leader’s suspicion track, your plot was detected. The leader is arrested, and all co-conspirators have their motivation reduced back to timid. It’s disheartening to see your plot fail, your items used without success, and everyone back to square one. It may seem unfair to have everything come down to a dice roll, but considering that even the best laid plans require some luck, it fits the theme perfectly.

What you will think is unfair is the amount of waiting you may have to do. Several plots require Hitler to be at certain locations. You may find yourself with everything you need to execute a plot only to hover around waiting for Hitler to get back to Berlin or retreat to a fortified location. It can make for a tedious round here and there, unless you’ve worked hard to set up multiple plots at once.

Black Orchestra is very much a puzzle, and your ability to replay it may depend on your success at solving it. Early on, my plots were failing miserably and I lost the game either by running out of time or seeing my conspiracy team all end up in jail. When I finally won, I admit I felt great exuberance, but then I promptly put the game away. I solved the puzzle, left it immensely satisfied, but it may be awhile before I attempt it again. This isn’t to say Black Orchestra is a bad game — it’s quite the opposite — but solving the puzzle may mean you need to walk away from it awhile before you feel the need to solve it again.

This game reminded me quite a bit of Academy Game’s Freedom: The Underground Railroad. Both involve darker points in history, yet both handle the subject matter tastefully. Black Orchestra does a lot of little things to immerse you into its historical timeline. Sure, you get the card text to briefly describe key historical events, but the event cards themselves changing colors subtly, becoming vibrantly red to an eventual faded black, echoing the fortune’s of war. The game does what it set out to do very well, but it’s your interest in its puzzle and theme that will determine its longevity with you.

Black Orchestra sets you on an adventure of putting together all the pieces you need to overthrow Hitler’s evil regime. The game does a masterful job of putting you in the role of a conspirator during World War II with its immersive theme and gameplay. The game gives you a sense of victory that makes you feel like you’ve really accomplished something. What happens after that first taste of triumph will be determined by your love of the history and cooperative games.