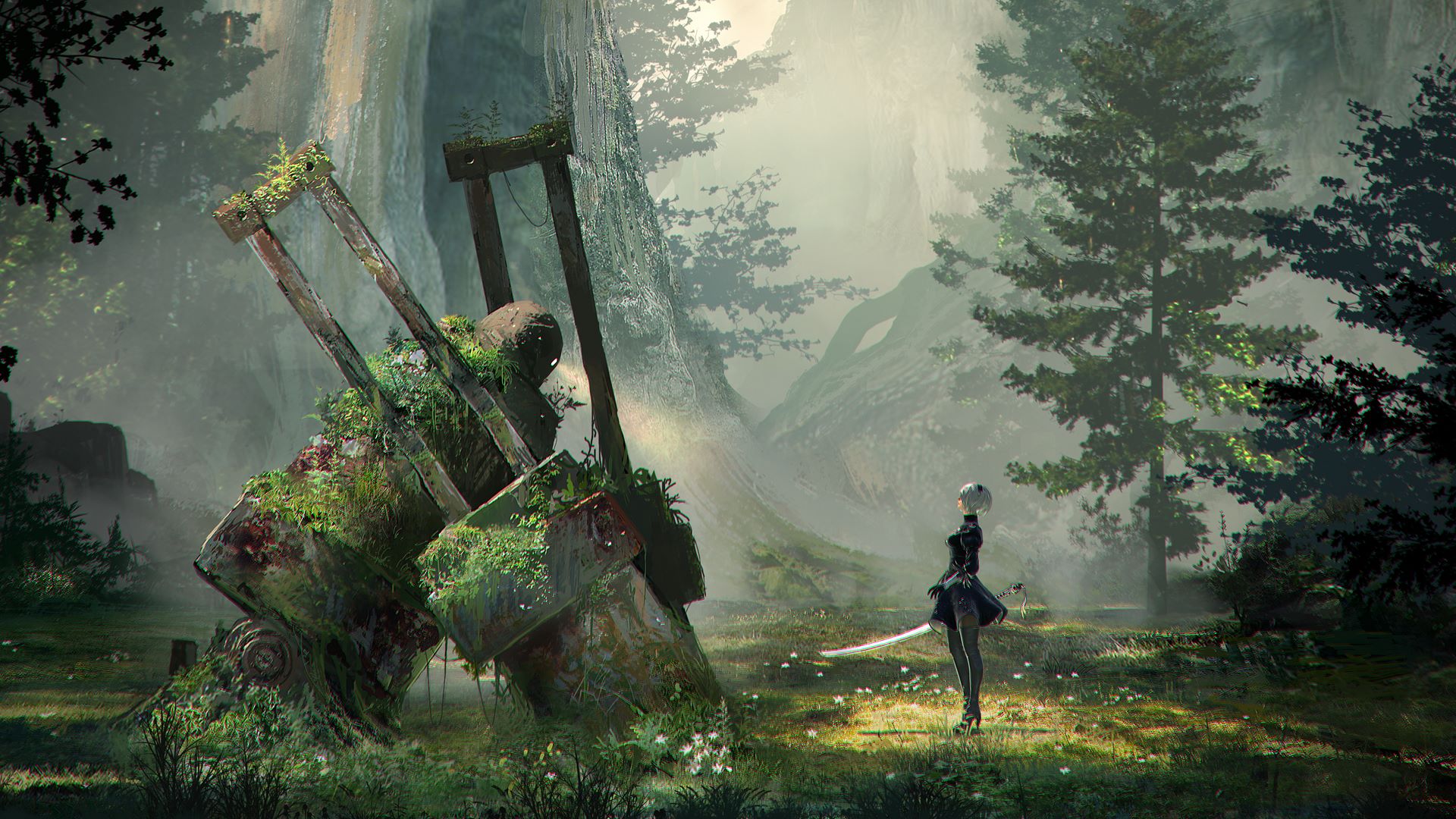 NieR: Automata takes place in a world dominated by machines, some made by aliens to wipe out human life, and others created by humans to combat the aliens and their machines. At the center of this conflict are 2B and 9S, two androids from YoRHa, the organization of androids opposing the alien-made machines. 2B and 9S are sent to the ruins of Earth to assist the resistance forces housed there. Throughout the campaign and its various playthroughs, the narrative takes many twists and turns concerning the state of humanity, the truth about the aliens attacking humans, and the nature of the machine life that seems to dominate Earth.

Although NieR: Automata offers plenty of action and drama in its narrative, it almost never concludes with any kind of payoff. Any twists in the narrative are either predictable or are simply meaningless within the context of the player’s immediate experience. You’ll learn about events that don’t affect you, hear about characters you don’t care about and have had little interaction with, and learn a history of events so needlessly complicated and strange that it borders on incomprehensible. Though the game certainly sets itself up for a drama with 2B and 9S at the center, it does little to endear the characters to you, give context for their actions, or incorporate the characters in a meaningful way into the game’s larger narrative. Through my 30+ hours with the game, I never gave up hope that the narrative would have a payoff eventually, but I increasingly got the feeling that a payoff wasn’t coming. By the end, I’d decided that the narrative and the characters were never going to be the game’s strong suit, and accepting that fact becomes essential in one’s ability to enjoy the game.

At its heart, NieR: Automata is an action game the likes of which Platinum Games has built a hard earned reputation for. The variety of experiences offered is immense. You’ll hack and slash your way through enemies, run through side-scrolling segments, endure bullet hell sections, play loads of hacking minigames, and sometimes even engage in a text adventure. Nearly all of these experiences are enjoyable, with the notable exception of the godawful hacking minigame. Though there are lots of different experiences to be found in NieR: Automata, you’ll spend most of your time enjoying the third-person hack-and-slash gameplay, which is when the game is at its best.

You’ll mix and match a variety of melee weapons that can be swapped out on the fly, utilize range abilities that can be customized and upgraded, perform badass finishing moves, dodge and parry enemy attacks, and taunt your enemies as you prepare to lead them to their graves. You’ll fight robots, androids, massive bosses, and evil centipede-like robots. The pedigree that Platinum Games is known for as an action games guru is firing on all cylinders in NieR: Automata, and you’ll be hard pressed to find a better hack-and-slash experience elsewhere.

NieR: Automata also features one of the better RPG systems I’ve seen in an action game of its like. In addition to the customizability and intuitive design of the weapons system, the game also gives the player the ability to forge new weapons and upgrade them with materials and in-game currency, which encourages you to try new weapon types and explore the world for resources. There’s also the “chip system,” which is one of the more unique systems to be found in the game. Since you play an artificial lifeform, the game gives you the ability to install chips with a variety of effects. For example, you could gain the ability to regenerate your own health after killing an enemy, upgrade your movement speed, or improve your efficiency with melee weapons. Each one of these programs takes up space on your drive,which can be expanded over the course of the game. If you’re still hungry for more room for cool abilities, you can choose to uninstall some things that are installed by default, like the minimap display, your health bar display, or various other things that show up in the UI as a part of the game’s canon. Doing so can provide an extra challenge or inconvenience, but allow you to become especially powerful.

One of the more unique aspects of NieR: Automata is the way in which one is expected to play it. Whereas most single-player games offer a straightforward narrative experience that is sometimes replayable via a “New Game +” feature, NieR: Automata offers various “routes,” which require you to replay the game again from a different perspective, or enjoy entirely new content after the credits have rolled. To put it simply, the game requires the player to play through four different versions of the game to get the “final ending.” Some of these playthroughs are minor or provide little new content, while others are completely original and add to the game in a major way. After my first ten hours with the game, I completed the first playthrough, which serves as the stock experience for casual players. This playthrough is the most comprehensive, well-balanced, and fresh playthroughs of the game. In subsequent playthroughs, the game experiments with different characters and storylines that flesh out the events of the core game, but are essential material for anyone looking to get the “full experience” of NieR: Automata.

The playthroughs after the first one range from grueling, rarely enjoyable trainwrecks to interesting new content, and players have to get through the former if they hope to enjoy the latter. Which means that a lot of the experience in NieR: Automata comes down to essentially gritting your teeth and playing through hours of mind numbingly boring content so that you can get to the parts that are more enjoyable. The second playthrough is one of the longer playthroughs, and is the most egregious in its tedium, essentially being a repeat of the first playthrough seen through the eyes of another character. While this is an interesting concept, in practice it means you’ll be replaying most of the game over again, except as a much more unlikeable character who also happens to be much less entertaining to control in combat. Instead of slicing your way through enemies with ease, you’ll spend most of your time hacking into your enemies and playing a minigame that feels like a low budget, mobile version of Geometry Wars. You won’t just play the minigame dozens of times, but rather hundreds of times, and each time the experience is nearly identical. You’ll end up memorizing all of the different variations and then will continue to be forced to play them hundreds of more times after that before the game is over.

The light at the end of the tunnel is that the third playthrough of the game introduces all-new content that essentially feels like a sequel to the first playthrough. The unfortunate part being that by this point, players might be burnt out by the game after having been forced to play 6 hours of upsettingly dull content. This was certainly the case for me, and that made the playthroughs following the second one hard to stomach, having felt betrayed by the game after a strong core game. Even more unfortunate is that the payoff you finally get in the third and fourth playthroughs of the game is hardly worth the effort you’re required to put in to get there. As I mentioned before, the narrative payoff is minimal, as the story and characters aren’t the game’s strong suit to begin with, and the big reveals we get in later playthroughs don’t have much impact in the best cases, and are almost incomprehensible in the worst cases. You’ll still be expected to play even more of the hacking minigame that has been drilled into your head during the second playthrough, and fight the same enemies you’ve been fighting the whole game, and your only reward at the end is a few achievements, more weak storytelling, and a segment that makes you literally fight the words that scroll down during the final credits sequence.

NieR: Automata’s presentation is incredible, and Platinum Games has gone through lengths to make it perform especially well on the Xbox One X, which supports 4K, HDR, and has an incredibly stable framerate considering all of the chaos that often happens on-screen. The world of NieR: Automata is dystopian, but beautiful, and the enemies and animals are full of life. The soundtrack has had equal care put into it, and features a ton of variety.

NieR: Automata is a masterclass action game with deep RPG mechanics, and a beautiful open world. While it’s held back by a weak narrative and a clunky game format that mandates replaying hours of content, it offers a wide variety of enjoyable experiences that make it well worth the asking price.

You know that jerk online that relentlessly trash talks you after every kill? That guy was probably Travis "Tie Guy" Northup. Competitive, snarky, and constantly wearing a tie, Travis has been writing his opinions about electronic media since he was a teenager, and is pretty much the only person to hold his opinions in high regard.
Related Articles: NieR: Automata
Share
Tweet
Share
Submit