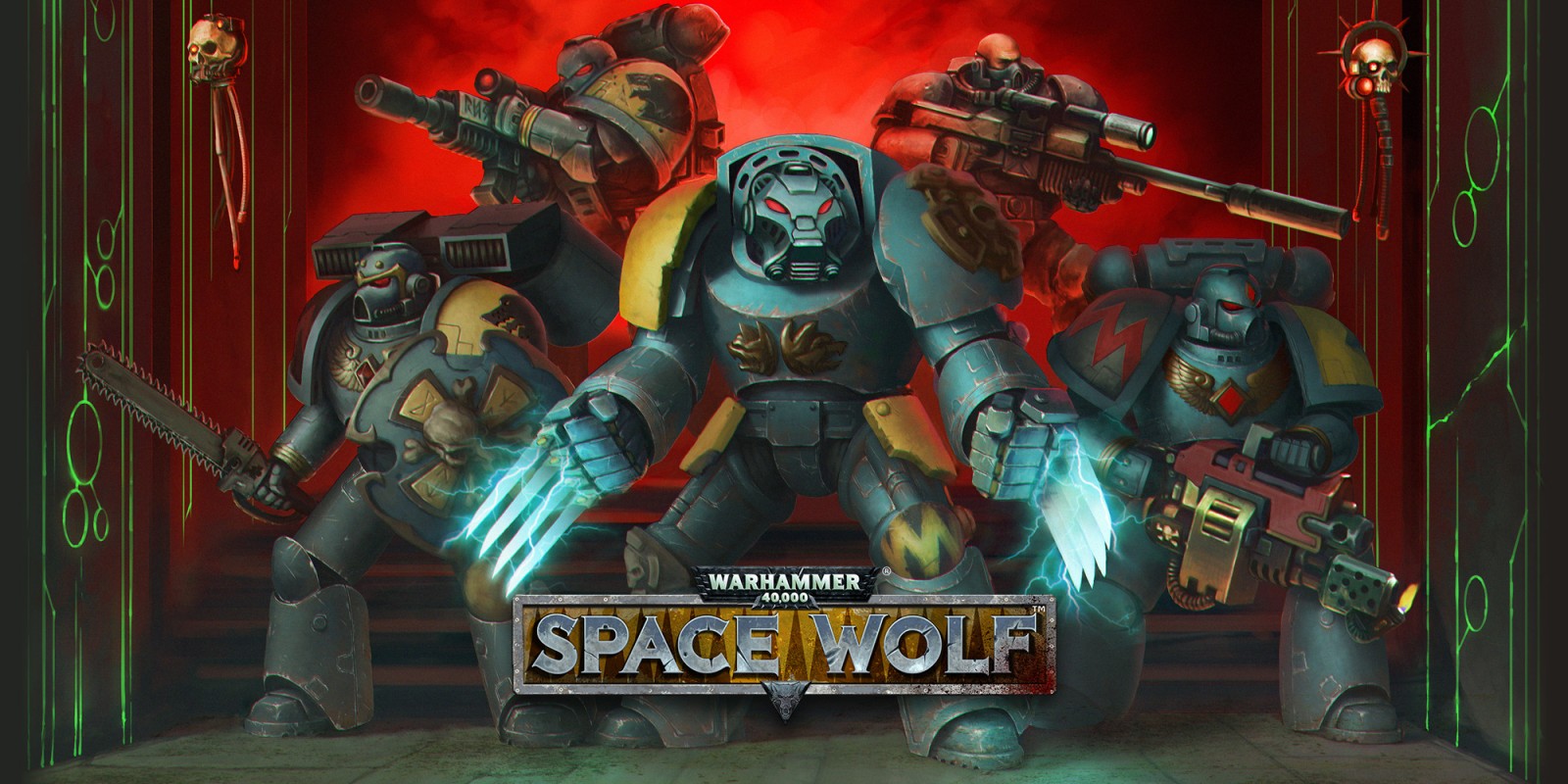 In the future there is only war, but until then, we have consoles and video games to keep us busy. And now Warhammer 40,000: Space Wolf from HeroCraft brings the Sons of Russ to join the battle on Nintendo Switch. Originally seen on iOS, Android platforms then later brought to Windows PC and PlayStation 4, W40k: Space Wolf is a turn-based tactical game with a dose of card battling thrown in for good measure. Back when I was playing Warhammer 40k on the table I was almost exclusively a Space Wolves guy, amassing a fairly substantial army and spending hours painting each miniature. So I was keen to see how this legendary Astartes chapter faired in the transition from tabletop to video game, and well… there’s good and bad in equal parts. So load those bolters, get aboard a Drop Pod and let the assault commence. 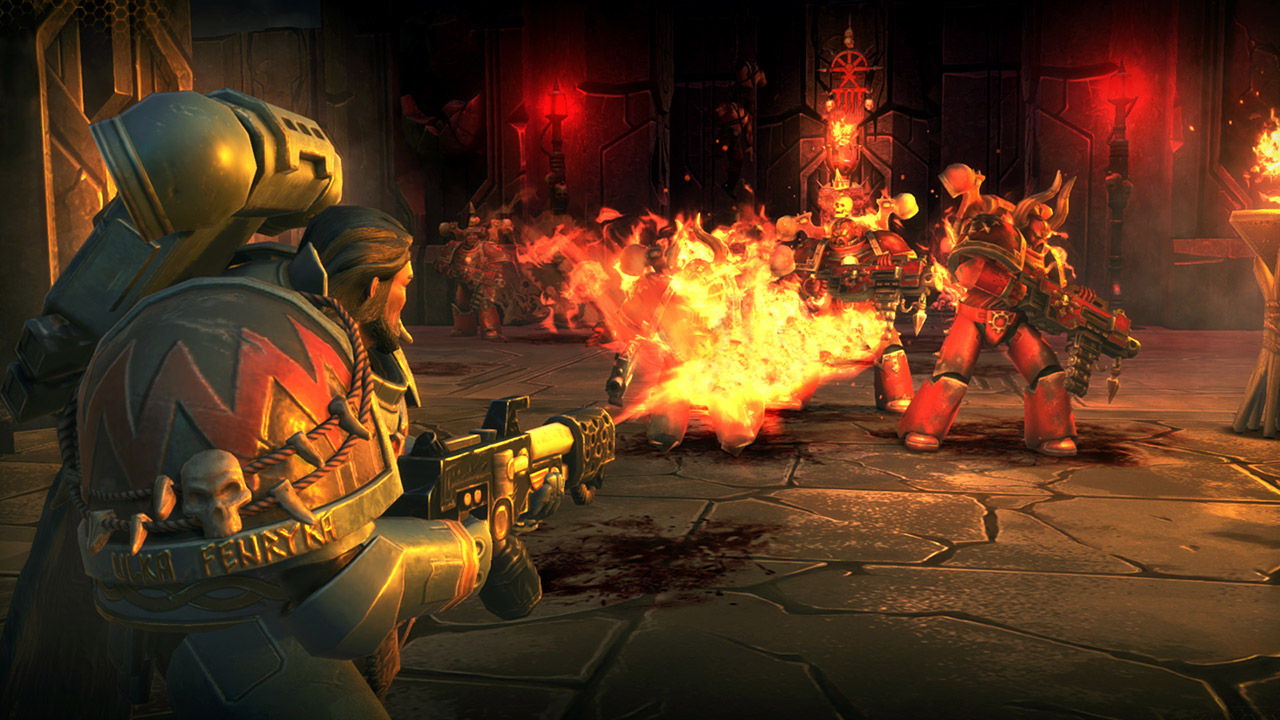 After falling victim to a trap set by vile Chaos Space Marines of the World Bearer Legion, players take command of a group of Space Wolves led by Valgard Twice Slain, who find themselves trapped on the hostile planet Kanak after crash landing there. Now, Valgard will have to gather up his scattered and fragmented brothers in arms to survive the dangers of Karak, claim vengeance and eliminate the Chaos threat. You’ll need to figure out most of this story as you go as the game cold opens to the first mission which serves as the tutorial, without any sort of text crawl or opening cinematic which I found a bit jarring, like I had blinked and missed something. Initially you only have control of Valgard but you’ll quickly find more comrades who’ll bring new tactical options with them. Some will be wearing standard power armour, some in light scout armour carrying sniper rifles while others don heavy terminator armour and tote great big assault cannons and power fists. Later you will be able to decide if Valgard himself will be clad in scout, power or terminator armour at the beginning of each mission.

Everything feels well enough in keeping with Space Wolves lore, from what I recall anyway. I’m sure some of our Tabletop Editors could dissect this aspect more than I can but weapons and armour looked correct, complete with Fenrisian runes and other bits of bling typical of Space Wolves. The dialogue, none of which is voiced, all feels in keeping with the gruf manor of the chapter, albeit in a somewhat cheesy but sanitised, family friendly kind of way. Similarly, the way different units are used seems faithful to the tabletop game, terminators will take more or a beating than a regular marine, scouts are quick but fragile etc. The similarities fall apart to a degree where there are no mechanics for more involved things from the tabletop, for example, being in cover has no effect and there are no flanking or pre-emptive attacks. The way that Warhammer 40,000: Space Wolf deals with everything from movement to attacks or healing is done through a card system and to a degree it makes up for some of the stuff it dropped from the tabletop game. 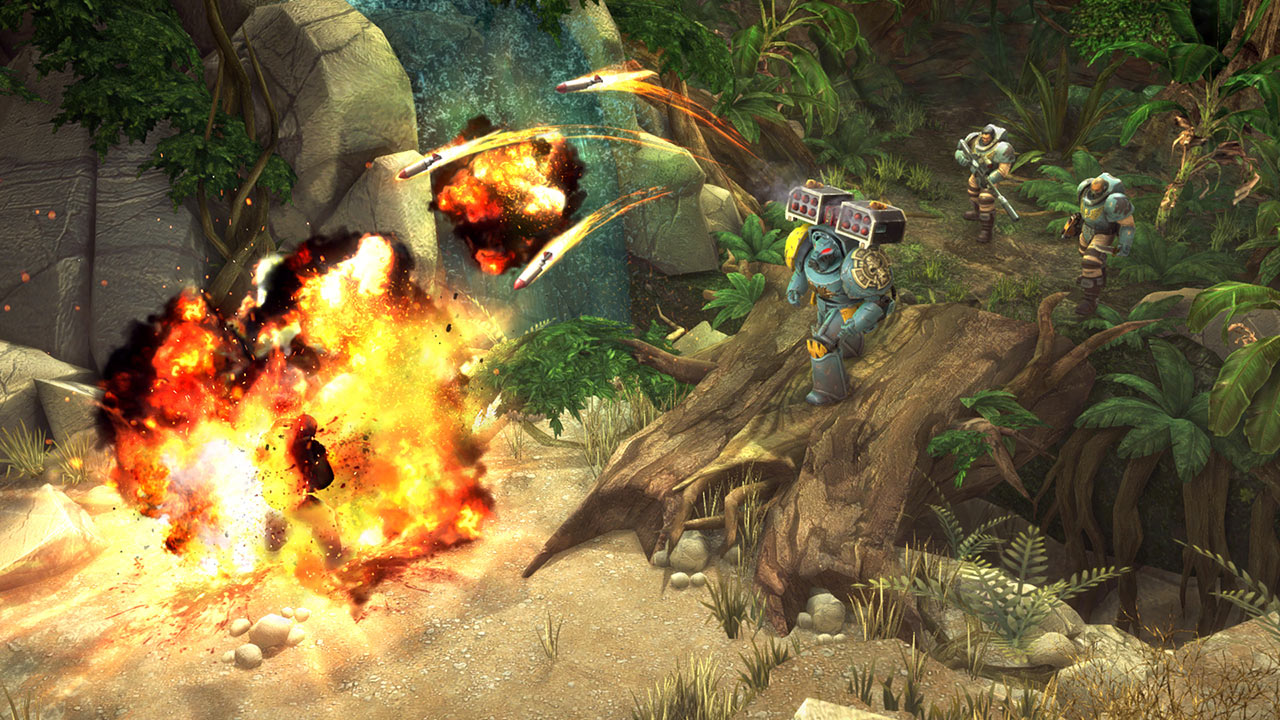 You have a deck of cards which can be customized outside of missions and added too, or multiples of the same card can be combined to make a more potent version. At the start of a level, a random selection of cards will be drawn for you to choose from, which may range from allowing you to equip a powerful legendary weapon or use a healing effect, others will simply afford the opportunity to move a unit or add a defense bonus. Some cards will draw additional cards to replenish those that you’ve spent. Moving around is done on a grid and you can only shoot or attack targets you are facing, so if a target runs around to your side you’re going to have to spend another card moving to turn and face them before you can attack. This can get a bit annoying when dealing with multiple enemies but it does force you to pay attention to what is going on in any given situation. Each card also has an effort value attached to it; powerful weapons or healing effects have a higher cost, simple things like moving are a lower value. This is essentially an initiative check and determines in what order units will act during the following round, there are also cards you can play that will lower a units effort score.

The last factor to consider is action points. Each unit starts with two action points by default and everything you do will cost one point, turning to face north from south? One point. Swinging a huge Thunder Hammer the size of a small family car, to pulverize an enemy into dust? Also one point. At times it can get frustrating and occasionally it feels like the computer is cheating, depending on how things ultimately play out, but at the same time I have had some genuinely fun and nail biting moments hoping that a particular unit can stave off defeat just long enough for a plan to come to fruition. It can be pretty tough getting through a mission and W40k: Space Wolf managed to keep me well engaged and determined to complete objectives even after numerous failures. As a side note, turns can feel a bit drawn out initially, especially when there are a lot of enemies present, but there is an option to speed up the game play in the options menu. 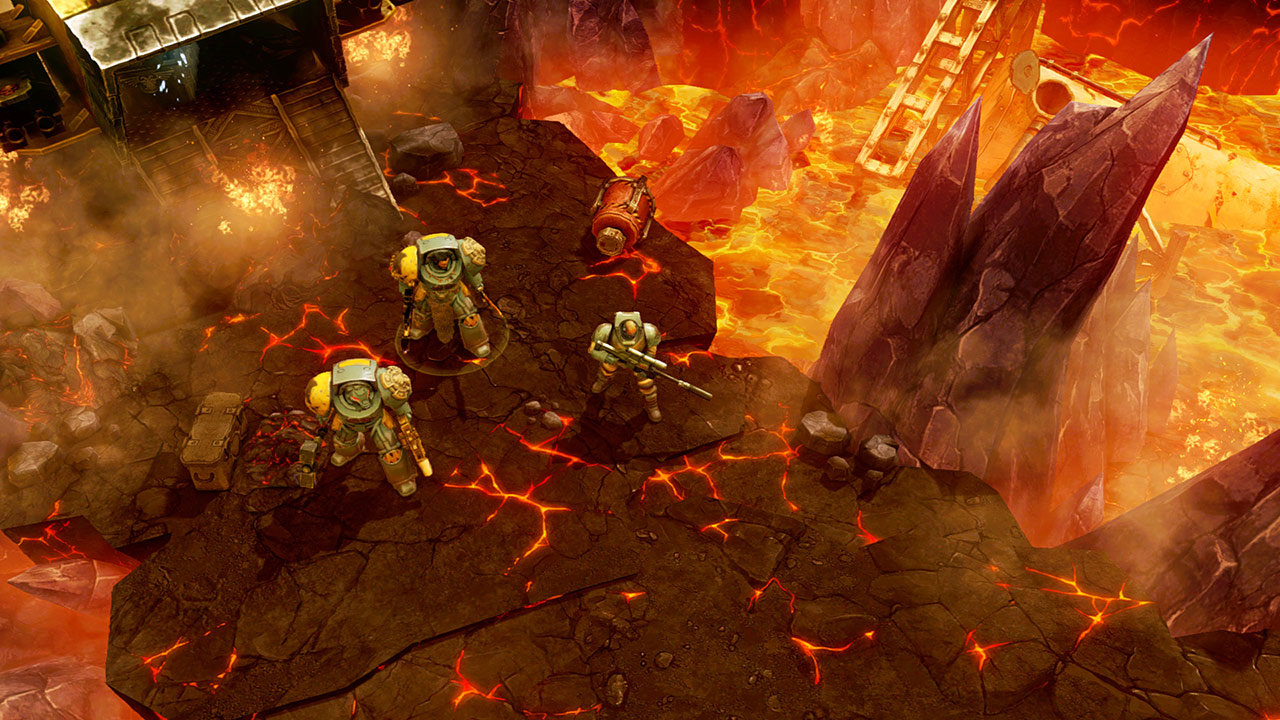 Visually speaking, having come from mobile platforms, Warhammer 40,000: Space Wolf is rough to say the least. Certainly serviceable, everything is distinguishable as the thing it is intended to be and there are some nice little details on the models, like the runes or bone charms often found on Space Wolf models. It’s just that it all looks very Xbox 360/PS3 era; I wouldn’t go as far as to say it looks like an Original Xbox era title but… it’s not far off. On mobiles that might be ok, but on a current 2020 system it’s a bit of a let down, even considering the lower power of Nintendo Switch compared to Xbox One and PlayStation 4, we still have DOOM and Witcher 3 on the system so it’s no excuse. Even more irritating is when the game seems to slow down and judder during kill cam animations, it can be obvious and takes you out of the game – particularly when everything else seems to run along just fine.

Looking at, or rather listening to the audio, I really wish weapons had more clout in that department. We’re firing great big shells the size of bricks from multi barrelled instruments of death and destruction but often the sound effects come across with all the thump of a warm fart in bed. When docked, I play my TV audio through a high end Hi-Fi and the result was the same here as it was while listening through headphones. As mentioned earlier, dialogue is not voiced so be prepared to read everything; luckily text is clear enough either docked or handheld.

Controls are also a bit clunky and often I found myself wrestling with the game to highlight the thing I was trying to. This in particular baffled me, Warhammer 40,000: Space Wolf began on mobile platforms with touchscreens, why on earth wouldn’t you implement touchscreen on the only console which has that function natively?! The game is crying out for this to be an option but nope, no sign of it. Load times are also a little bit drawn out too, I’ve seen worse but there’s definitely a chance to check your emails while waiting for the game to spring to life. On the plus side though there’s support for two players and all previously released DLC is included for the $17.99 asking price which is a pretty good offer when comparing the price of the same deal on other platforms.

Warhammer 40,000: Space Wolf is a good tactical challenge marred by frustrating mechanics, questionable graphics and dodgy controls. But I had fun with it nonetheless and the card system differentiates it from other turn-based strategy games. Ultimately, your enjoyment may depend entirely on whether or not you have any prior interest in the Warhammer 40k universe.

Grumpy gamer from UK with a keen interest in retro gaming and modding. Can also be found cycling up and down mountains, walking dogs, watching Sci-Fi and reading all sorts of books.
Related Articles: Warhammer 40000: Space Wolf
Share
Tweet
Share
Submit