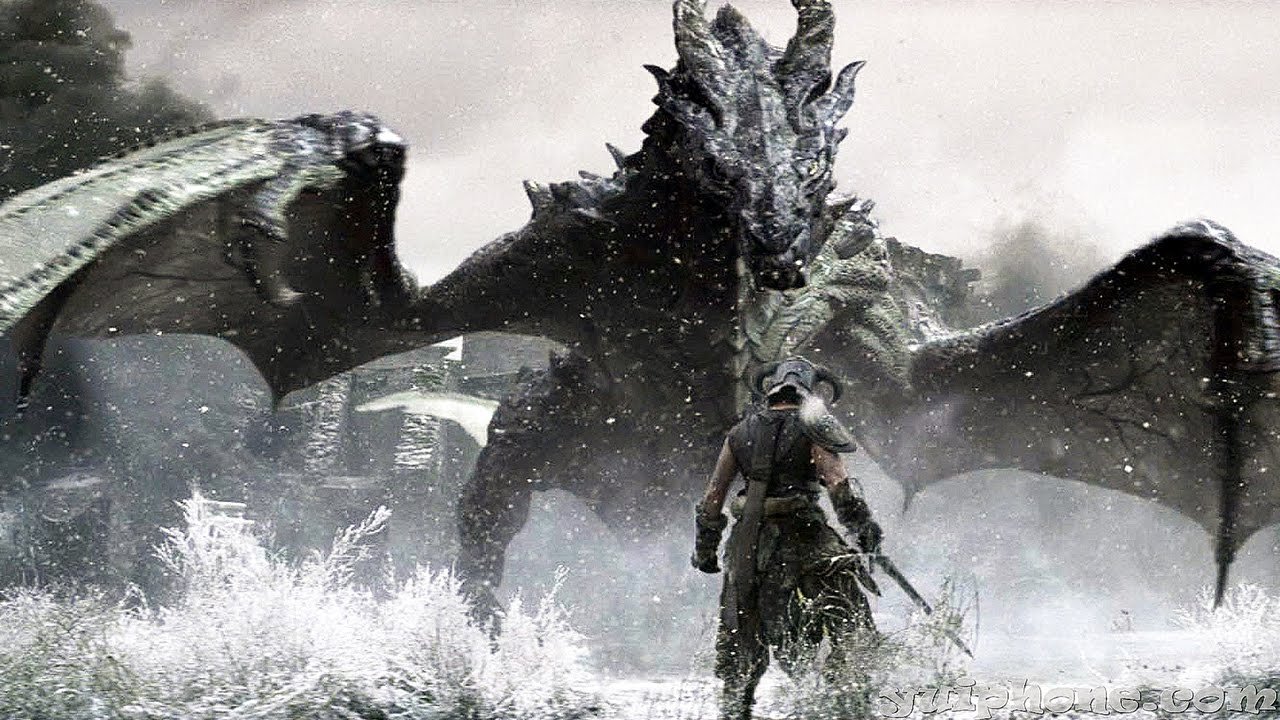 I have spent a lot of time in the world of The Elder Scrolls. The Elder Scrolls V: Skyrim has gotten a lot of my attention lately as I’ve reviewed it on Xbox 360 (review), played it entirely too much on PC, and most recently tackled it on Nintendo Switch (review), and PlayStation VR (review). Now, I have a chance to experience it in a (somewhat) entirely new way, via the HTC Vive. Could this PC version shore up the muddy textures, painful menus, and lack of mod support to create the best version of Skyrim possible? Time to strap a heavy VR brick on my face to find out.

I’m not going to rehash the storyline — I think I’ve belabored that in my other reviews enough, but suffice it to say you are the Dragonborn, a chosen one that can ingest the souls of dead dragons and then use their great shouts and powers. Your job is to be completely awesome, and stuff.

Words simply cannot express how big these guys are in VR

For all of their faults, The Elder Scrolls games nail one thing better than anything else. They give you a short intro, pop you out of a cave, sewer, or jail, and then simply say “It’s your world now…go explore as you see fit”. Most VR experiences with any level of quality are linear experiences with very little opportunity to explore off the beaten path. As this is the full version of Skyrim, you are completely free to shape the Old Kingdom in any way that you’d like. You can be the sword-wielding, shield wearing badass, or you can hurl fire and lighting from each hand. You can use a bow (with a realistic aiming toggle, thank you Bethesda!), or you can combine all of these things together. Whether you wear robes, plate, or magical armor made of glass, Skyrim lets you experience it how you see fit.

Just as they were in the PlayStation 4 version of Skyrim VR, wolves and spiders are downright terrifying. They sneak up on you, leaping at the last moment to try to tear your face off. If you intend to go wandering around the woods in VR, make sure you “wear the brown pants”. Beyond scary ass wolves, dragons are incredible. The sense of scale on a pancake screen gives you an idea that they are pretty big, but seeing them in VR is a different matter entirely.

Giants are formidable on a pancake or VR screen.

All of that said…this is Skyrim, so there are a number of hilarious (and occasionally frustrating) bugs. The first time I played the game I was greeted by the all-too-familiar cart scene. Slowly rocking my way across the cobblestones, I watched as the trailing horse and rider suddenly jumped 50 feet in the air and got stuck on the overhang of a building. My cart reached the destination where I was to be beheaded…and nothing happened. Whatever trigger that was supposed to occur simply didn’t fire, leaving me to restart the game. This time around the horses stayed put, but the cart in front of me did a cartwheel and flew off into the wild blue yonder. Physics bugs and Bethesda games go together like peanut butter and jelly, so you can’t be surprised.

There is one strength, and it’s a big one, that this version has over its PlayStation VR counterpart. I imagine you think I’m gonna say graphics (and they really are much better, but more on that later), but it’s actually mods. There is a huge community of mod makers that have already enabled things like being able to switch spells with your voice, texture upgrades, facial updates, foliage and water replacements, lighting and audio improvements, and pretty much every other mod that worked on the pancake version of the game. This makes this edition of Skyrim the most immersive and best version of the game, hands down. There’s simply nothing like hurling fire at your foes, and actually swinging a sword to cut them down as they get close, except maybe sticking a nasty spider in the face with an enchanted arrow.

Swinging a weapon in VR is awesome, even if it doesn’t have weight.

On the flip side, there is one area where all games that are ported to VR suffer – menus. Bethesda chose not to rebuild the menu system for a virtual space, so you are presented with large floating panels to navigate through by sliding your thumb (not clicking) on the Vive wand pad. It’s not wonderful, but again, with mods it can be fixed. What can’t be fixed, however, is the same challenge Fallout 4 VR had — objects can’t be freely manipulated in the environment. You’ll pick things up by clicking a button, and they slide into your inventory magically. It breaks VR immersion, if only a little bit.

Graphically, Skyrim VR is a bit of a mixed bag right out of the box. Like the PS4 version, it looks like a mixture of the original and the remastered edition. Textures that looked ok when starting at a screen six feet away look downright hideous in VR, but the draw distance is magnificent. Similarly the (frequently) aforementioned spiders are gross and furry up close, but wolves look like they’ve seen something horrible and can’t quite get over it, with their wide-eyed goofy eyeballs. All of that said, the mods I just mentioned can fix any and all of these. If you have the horsepower to run it, there’s no limit to what you can do with this game. I’ve already tricked the game out with a ton of little quality of life adjustments that make the game play the way I want it to.

With mods, this could be any kind of elf you want. Any…kind.

I’m going to do something I don’t normally do, and score the game based on what’s here, but also what’s possible. With mods, this game is gorgeous, and you can trick out just about any aspect of the experience, though the menus and overall object interaction is still very much stuck in the pancake world. Still, there’s nothing quite like standing your ground and taking the fight to the enemy. In VR, I am the Dragonborn, and that’s what virtual Skyrim is all about.

Ron Burke is the Editor in Chief for Gaming Trend. Currently living in Fort Worth, Texas, Ron is an old-school gamer who enjoys CRPGs, action/adventure, platformers, music games, and has recently gotten into tabletop gaming. Ron is also a fourth degree black belt, with a Master's rank in Matsumura Seito Shōrin-ryū, Moo Duk Kwan Tang Soo Do, Universal Tang Soo Do Alliance, and International Tang Soo Do Federation. He also holds ranks in several other styles in his search to be a well-rounded fighter. Ron has been married to Gaming Trend Editor, Laura Burke, for 21 years. They have three dogs - Pazuzu (Irish Terrier), Atë, and Calliope (both Australian Kelpie/Pit Bull mixes).
Related Articles: The Elder Scrolls V: Skyrim VR, VR
Share
Tweet
Share
Submit