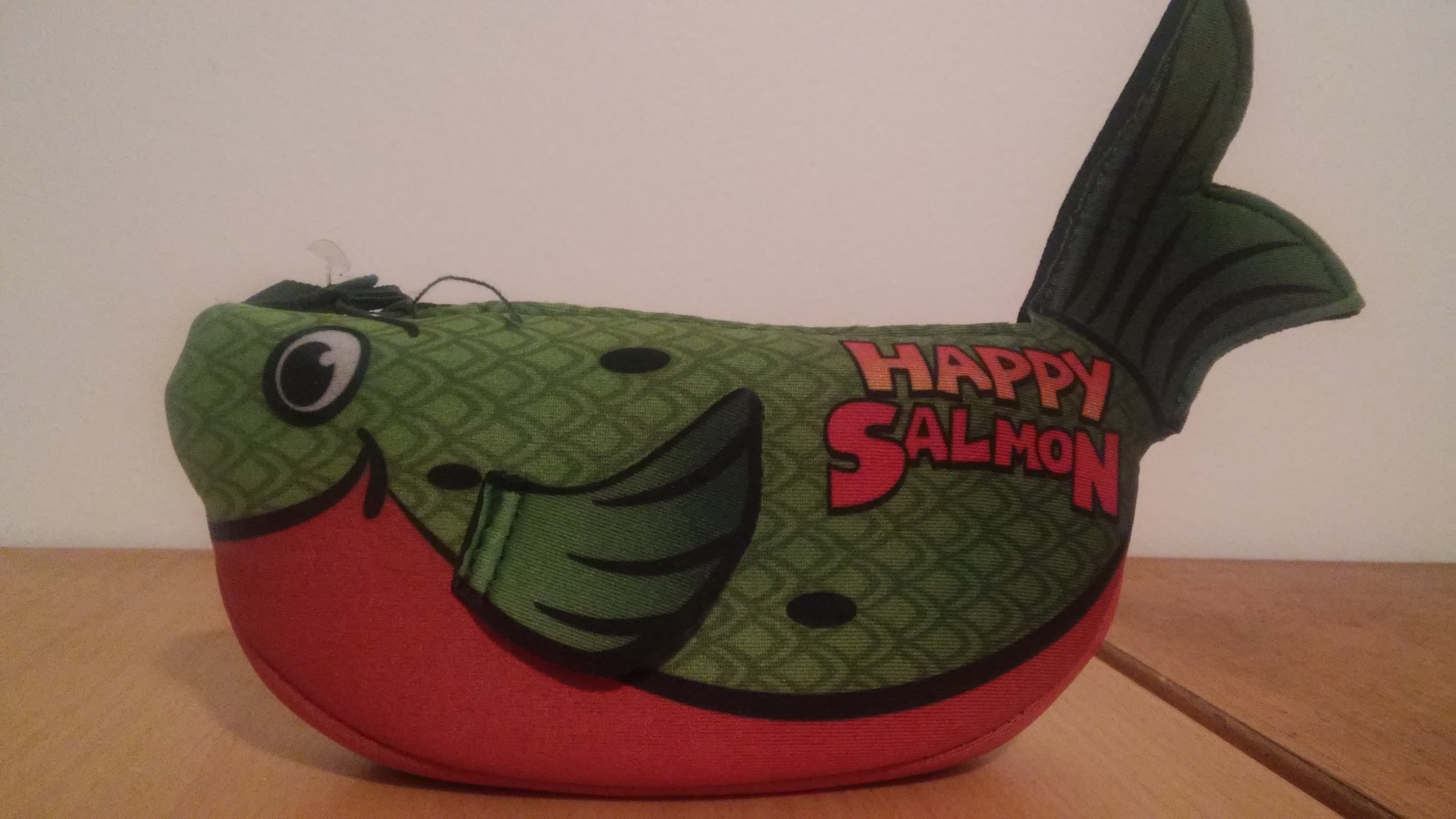 Happy Salmon is the kind of perfection that defies typical analysis. My reviews usually focus on the nuance of a game; how its mechanisms translate the emotional weight of its theme, draw people out to explore their psyches, or just help facilitate a good time. Happy Salmon does all of these things, but it does them by eschewing nuance, complexity, or the premise that games have to last longer than a minute.

To step aside from this verbose philosophy, Happy Salmon is fun. It’s the kind of pure, frenetic, unpretentious fun that lets you envelop yourself in the experience, and it connects you to other people in a way that only games can. The packaging, such as it is, should tip you off before you open the game or learn anything about it. It’s shaped like a little cloth salmon, flopping around all over the place. I’ve sort of made a name for myself here at Gaming Trend being verbose, but there’s no better way to describe this bag than that this is adorable and I love it. It comes in green salmon and blue, or both if you want to expand it to more than six players. It’s a little salmon.

The game is incredibly simple: you will have a deck of cards with a mixture of four different moves: high five, fist bump, switch places, and Happy Salmon, where you slap hands against one another, flopping around like a fish out of water. The goal of the game is to empty your hands of these cards first, but to do so you have to interact with other people.

After shuffling your decks, play begins when someone shouts “Go!” setting you off in a mad dash towards insanity. After that point, you turn over the cards from your deck one by one. You can only turn the next card if you find someone who shares your motion, do it with them, and proceed to the next. Once the game starts, what proceeds is a minute of shouting and running and heart pounding chaos that defines what party games are supposed to bring out of you.

The first time I played I knew none of the people I played with, but those walls evaporated as we were connecting, physically and emotionally, in this capsule of hilarity that was Happy Salmon. The rules explanation took approximately a nanosecond, and that was all that stood between us and one of the most simple yet engaging gaming experiences I have had in a long time. I was with a mixture of adults and children of different genders, and it couldn’t have mattered less because by gum I needed that fist bump.

You can also play wordless mode, in which case you can only communicate with hand gestures and pointing, making for a different type of strangeness as you and your group are standing in a circle waving your arms at one another, as if you were attracting them to a used car lot.

It’s that distillation of the gaming experience that makes Happy Salmon hard to categorize. It knows its goals and surges towards them like mating season was about to end up stream, and then it’s over. As you catch your breath and look around to the smiling faces around you, you realize that something special has just taken place.

Is that to say the game is truly perfect? Not quite, or at least not for all gamers. It does involve moving around, so those with mobility issues will not be able to play. It also requires some room to play, because it will have you moving around a table. The fact that it only lasts around a minute, at least with six players as I tried it, could be a drawback as well. You will play it multiple times, but each game is short and isn’t a full experience on its own. You will use this to open or close a night, rather than on its own.

That said, Happy Salmon has a cool $15 price tag, which greatly helps to justify its succinct nature and simplicity. Whether you are interested is more a matter of taste than of inherent quality, but the quality is there. Happy Salmon is currently up for Toy of the Year, and I know the good people at North Star Games would be happy (about as much as some sort of aquatic beast) if you were to give the page a look and consider voting their way.

Happy Salmon is a minute long game that brings people together for moments of pure fun and joy. While you are running around a table shouting at people you find yourself not thinking about anything else, and that immersion is what makes games so special.

John Farrell is a legal aid attorney specializing in domestic violence, living in West Chester Pennsylvania. You can listen to him travel the weird west as Carrie A. Nation in the Joker's Wild podcast at: https://jokerswildpodcast.weebly.com/
Related Articles: Happy Salmon, Tabletop
Share
Tweet
Share
Submit