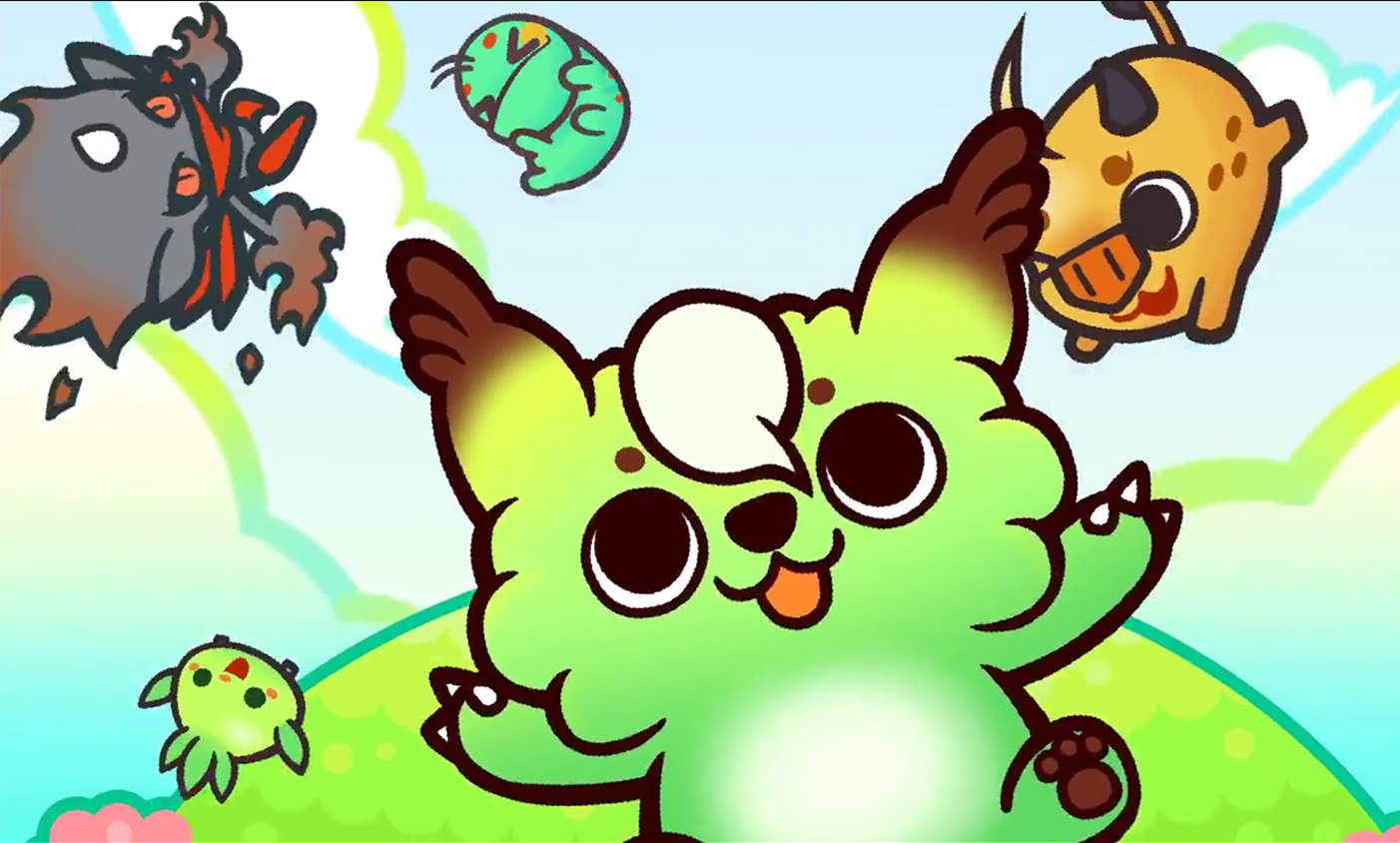 I wasn’t entirely sure what to expect of Mononoke Forest, a seemingly unknown Japanese import in the eShop, but I was drawn in by the promise of cute little monsters and some kind of town building mechanic. This $4 title plays like a bizarre combination of Animal Crossing and Bubble Bobble, and comes loaded with far more easy to play, addictive charm than I was prepared for.

The game follows a small group of Mononoke, elemental spirit monsters, who are trying to rebuild a decimated village after losing their leader, the Grand Mononoke. Thanks to a fortunate encounter with Cororo, a young Grand Mononoke, the little tribe of monsters set to work cleaning the environment, healing the land, and granting the wishes of the humans whose village they oversee in order to collect Happy Orbs. Happy Orbs are produced when… you guessed it, people feel happy, and the Mononoke believe that if they collect enough happy orbs, they will be able to go to Paradise.

These four characters are joined on their quest by Kororo, an odd, traveling Mononoke who doesn’t quite seem to fit in with the others. Together they seek to fix the already decomposing town, overcome natural disasters, and stop the Hazard Mononoke. Hazard Mononoke, which have have some of the best designs in the game, feed off Unhappy Orbs, which they get from causing distress and anger in humans. The story is pretty transparent, you can probably already guess the basics of it just by looking at the screenshots, but it tells a heartwarming little tale about friendship, and Cororo is endearing in his clueless, relentless optimism.

The game is played by combining different sets of Mononoke and flinging them to the top screen, where their elements impact the environment. This system starts off pretty simple: two combined fern Mononoke will clean polluted land, a bug and a grass Mononoke will cause grass to grow, while a flower and a tree Mononoke encourage trees to sprout. New kinds of Mononoke unlock as you progress through the game, and they can be combined in numerous ways to terraform the land, allowing you to do everything from clearing debris, to building hot springs, to influencing where your villagers will decide to build a condominium. I found myself consulting the Mononoke index often, as there are very specific ways to combine monsters to get the desired result, and I frequently had to freshen up on which monsters created a fish farm verses which ones simply attracted fish to the area. Mononoke have the ability to evolve as they level up, and each element havas three different forms. Upon leveling up, you can spin a roulette wheel, which will award boosts to your Mononoke’s new form. This wheel is very easy to control, and once you get the hang of it, allows you to customize your play style and make up for any less-than-ideal stats.

You battle Hazard Mononoke by flinging Mononoke at the top screen, though during these battles, you have to toss individual monsters, so you can’t pair them up. That said, most of your damage is done by building a bomb by combining three Cororoke. (I know, Cororo, Kororo, and Cororoke… it’s a bit confusing, just roll with it.) These magical seedling spirits that look rather like possessed radishes, and are produced by the Grand Monoke; when outside of a boss battle, they can be added to Mononoke pairs to give them more power to influence the environment. Battles have an incredibly short timer and are both quick and challenging, especially early on. The aiming mechanic is easy and pretty forgiving, and should you fail to beat a boss Mononoke, you can always fight them again; the damage you’ve done will carry over to your next encounter.

In the beginning, there’s a whole lot to do; almost too much to do. Villager requests seem to pop up two a day every day, the land is polluted and filled with debris, and you’re not yet strong enough to quickly repel Hazard Mononoke from the village. The opposite is true by late game, when I found myself ending turns early, just because I had nothing left to accomplish in that area. There’s no reliable way to trigger the game to make the plot forward, so I spent a lot of time just pushing through turns to see if something interesting would happen the next day in a nearly futile attempt to see the conclusion of the story.

Mononoke Forest provides a surprisingly good time for a very small price tag. Bubble Bobble meets Animal Crossing, this delightfully quirky game is easy to pick up and shockingly hard to put down. While the story isn't anything revolutionary, it's entertaining, and the monster designs, particularly for the Hazard Mononoke, are stellar.