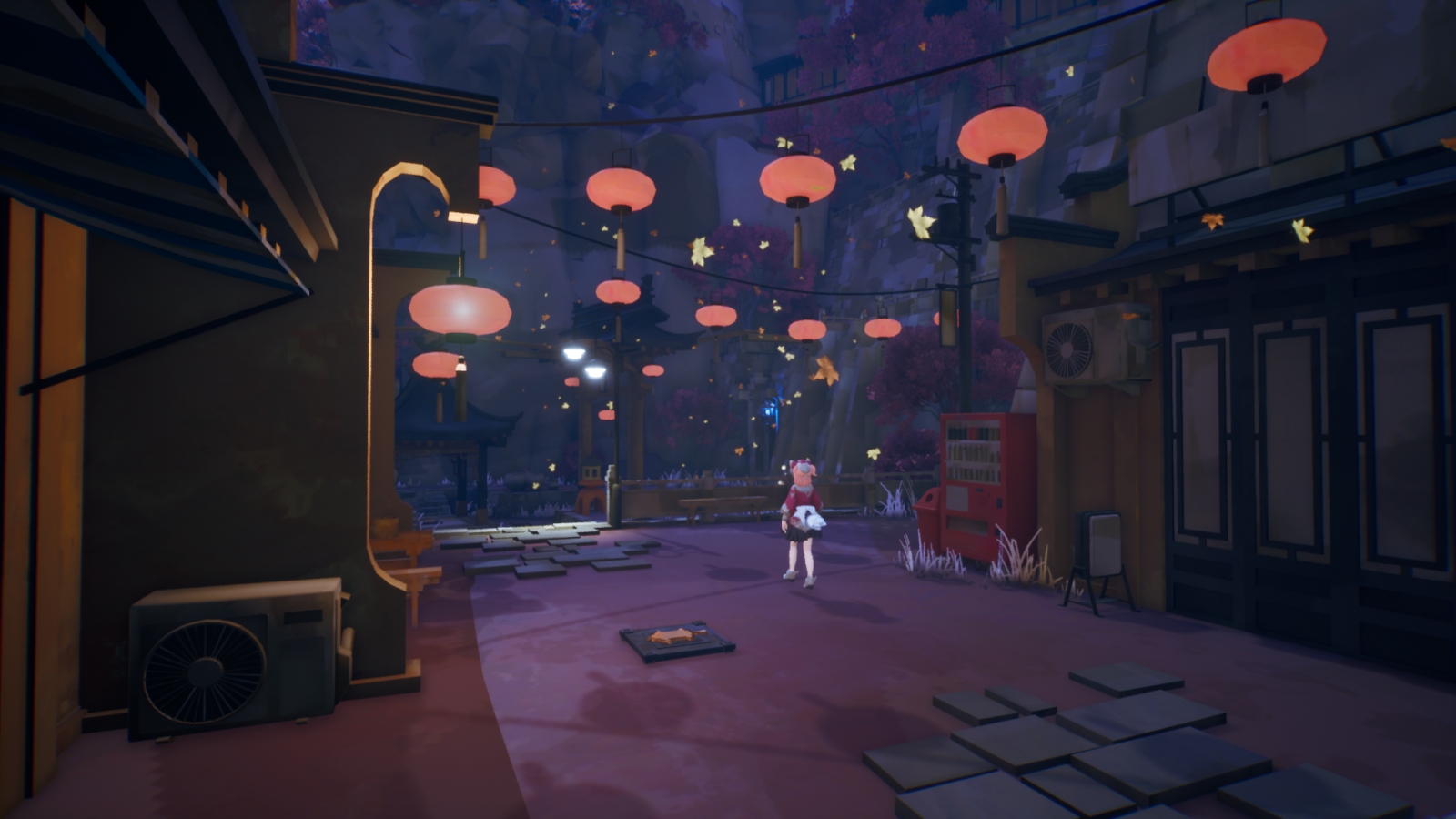 I can’t get enough of 3D platformers. From Mario and Ape Escape to more obscure titles like Skylar and Plux: Adventure on Clover Island, I’ve played quite a few of various qualities. There’s something about just moving and jumping around these worlds that appeals to me, and Tasomachi: Behind the Twilight is no exception. It stars a young girl named Yukomo whose airship suddenly crash lands in a city covered in mysterious fog. To lift the fog and repair her airship, she needs to restore the sacred trees in each sanctuary and collect Sources of Earth. It’s certainly not breaking new ground story wise, but it’s a good enough excuse to explore the world presented here even if the translation is awful at best.

If you take a look at the game’s steam page, you’ll find that the developers are most proud of the game’s visuals, specifically the far eastern aesthetic. Tasomachi is indeed a very pretty game, especially in certain sections of each town where leaves and flower petals are floating around, but after a while each level began to feel very similar. While each section tries to have its own color pallet, you’ll be seeing a lot of the same red, black, brown, and grey buildings all over the place. The visuals are taken down another notch by the poor animations, as Yukomo looks robotic in just about everything she does and the little cat creatures you can see around town only have one panicking animation. This leaves Tasomachi overall feeling too lifeless in the looks department.

What really stood out to me was the game’s soundtrack – it’s surprisingly bumpin’! The town themes once you’ve lifted the fog are relaxing, but the song that plays when tackling the various sanctuaries takes inspiration from traditional eastern music as well as more contemporary techno and trap music. While I wish there were more tunes, what is here is very good nonetheless.

Yukomo controls pretty standard, she moves with the left stick and jumps with A. As you restore the sacred trees she gains new moves including a ground pound, mid-air dash, and double jump. You’d hope that what the game lacks in terms of variety of moves it would make up for with how good they feel to use, but unfortunately you’d be wrong there. Yukomo constantly feels floaty and unwieldy to control. Her standard jump doesn’t have much height to it and it’s hitbox is very strange, she seems to “land” before the animation actually finishes. The dash and double jump are more momentum halting suggestions rather than actual actions and finally the ground pound is a weird teleport thing that just feels bad. Eventually you can get the hang of how Yukomo plays, but it never really feels satisfying. 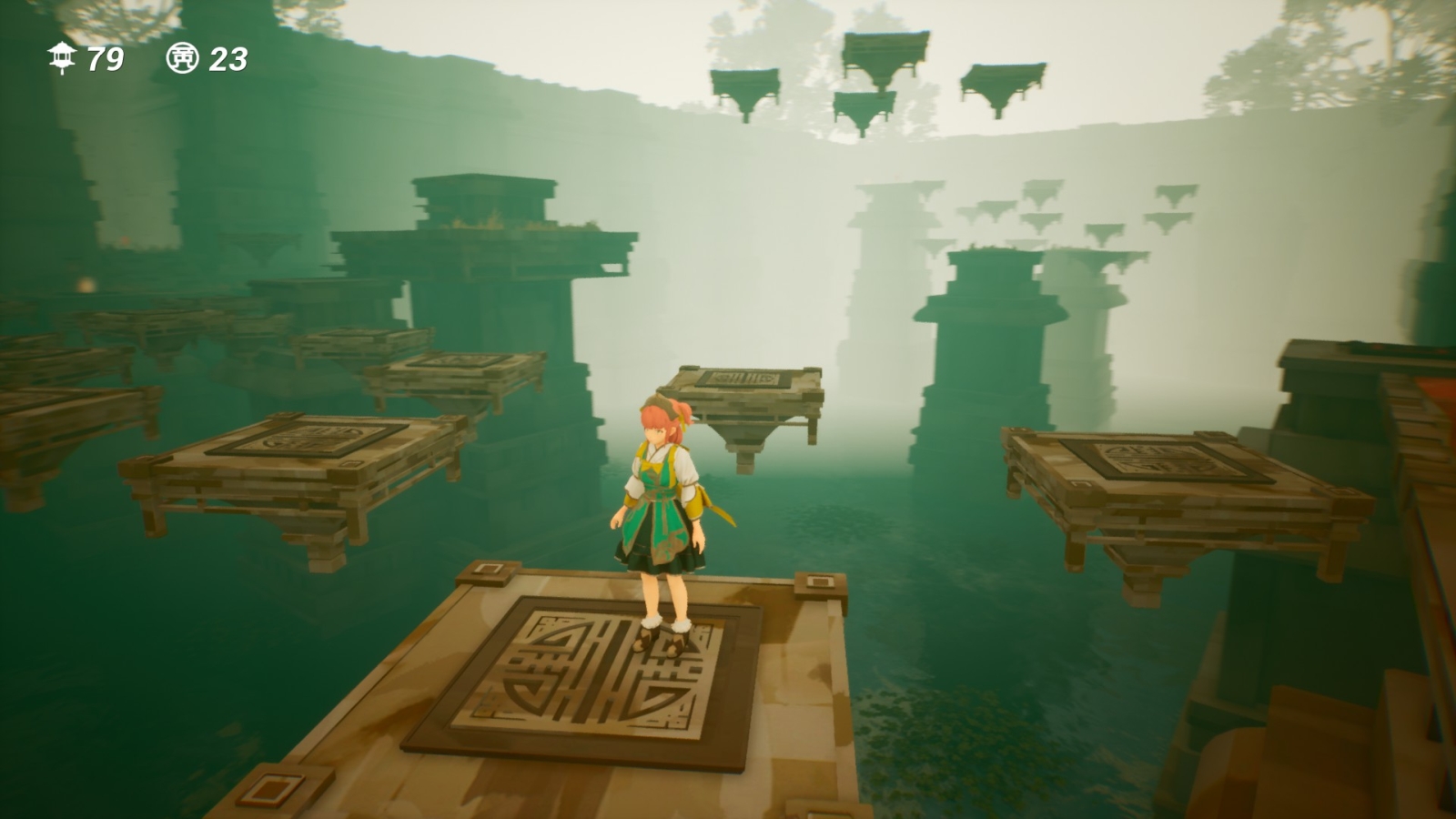 The various mechanics of platforms and objects you’ll encounter don’t feel great either. The spinning wheels and falling platforms you’ll contend with aren’t anything special, but much more common for some reason are these teleportation puzzles. You know the drill with these things: go through every single one methodically until you eventually reach the end. I don’t think anyone has ever found these things enjoyable, but there are nonetheless quite a few of them in Sanctuaries. Other than that, there are standard moving platforms, invisible platforms, and platforms that toggle on and off when you jump. Nothing particularly special or new here, but it does the job of contrasting the more open town segments.

All that being said, I’d be lying if I said I didn’t have a good time playing Behind the Twilight. I think that comes down to the levels themselves. The towns are by far where the most fun is to be had. Much like Mario Odyssey, there are collectables hidden absolutely everywhere. You can find money to buy furniture (which will then appear… somewhere in the hub) or new outfits and Sources of Earth to progress to the next level. The challenges to find the Sources are also fairly straightforward, like interacting with a certain amount of objects, platforming up to a hard to reach spot, or just laying around, but even still it’s just fun to explore these locations. There’s a lot to see and do in each level so you can just wander around and eventually you’ll have enough Sources to proceed to the next level. 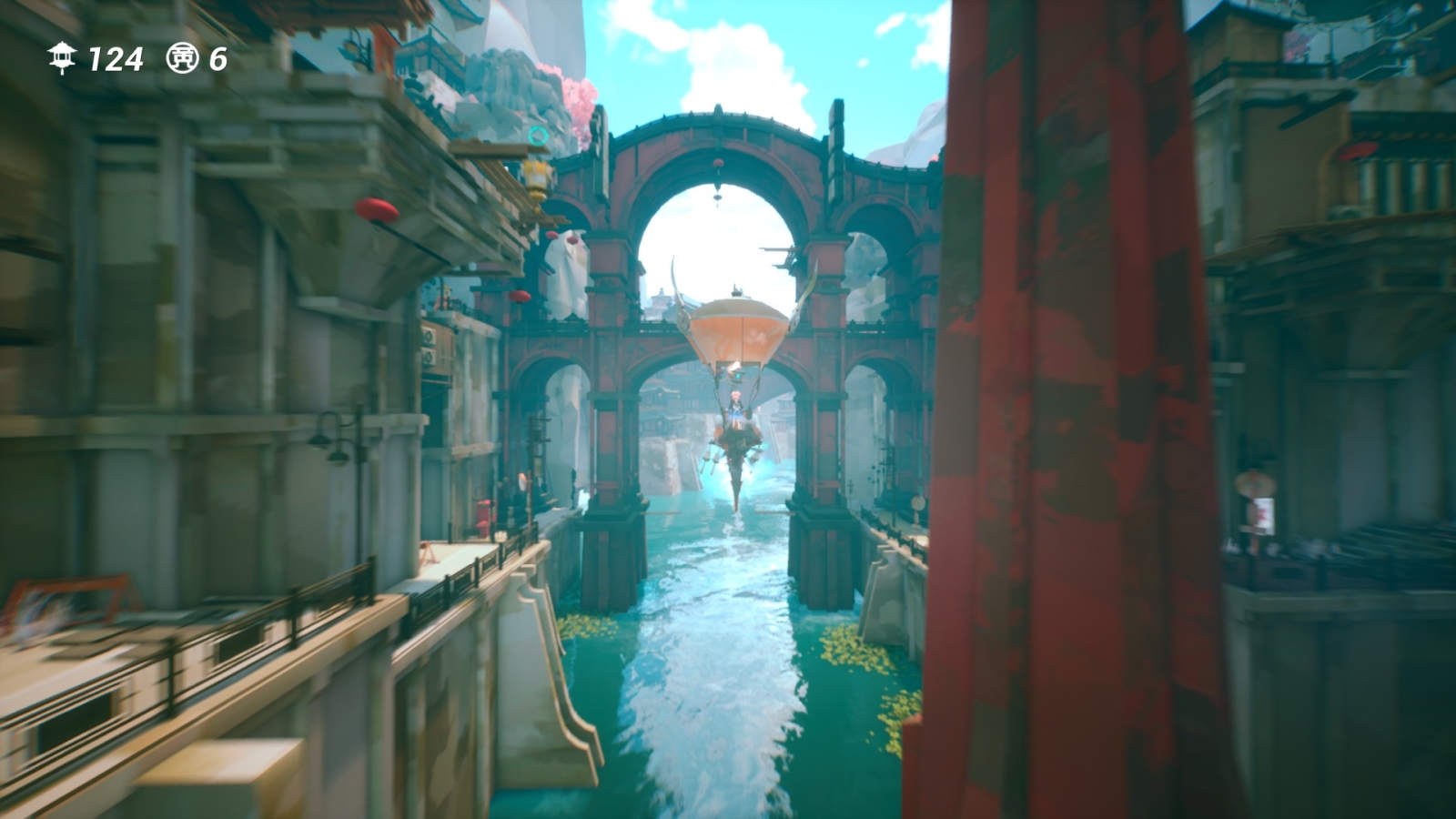 Once again, however, these stages come with a few caveats. As I said before, they can feel samey but what’s worse is that upon leaving a stage everything resets, so it can be difficult to tell what you have and haven’t done on a revisit. You’ll need to revisit every level to finish the game too, as collecting 90 Sources will fix your airship but you then need 150 to go to the last area. Once your airship is fixed, you unlock new challenges both on the ground and by flying around (which are sadly mutually exclusive, you can’t collect ground Sources with the airship and vice versa). Most Sources have a little tile on the ground near that challenge that greys out when you collect it, but there’s no way to tell which tiles correspond to which challenges. Another example are the lanterns spread throughout each town, lighting all of these unlock some jump or teleport panels but all of these turn off as soon as you leave the area. So if one of these new challenges needs you to light the lanterns, you have to find and light every single one of them again. It can get tedious, but thankfully you can avoid those types of challenges if you so wish.

Tasomachi: Behind the Twilight is a fairly rote 3D platformer with some great music and a nice aesthetic. While the controls feel floaty and there are numerous other annoyances, there’s still fun to be had exploring the intricate towns.

David is the kind of person to wear his heart on his sleeve. He can find positives in anything, like this is a person who loved Star Fox Zero to death. You’ll see him playing all kinds of games: AAAs, Indies, game jam games, games of all genres, and writing about them! Here. On this website. When not writing or playing games, you can find David making music, games, or enjoying a good book. David’s favorite games include NieR: Automata, Mother 3, and Gravity Rush.
Related Articles: Indies, Tasomachi: Behind the Twilight
Share
Tweet
Share
Submit