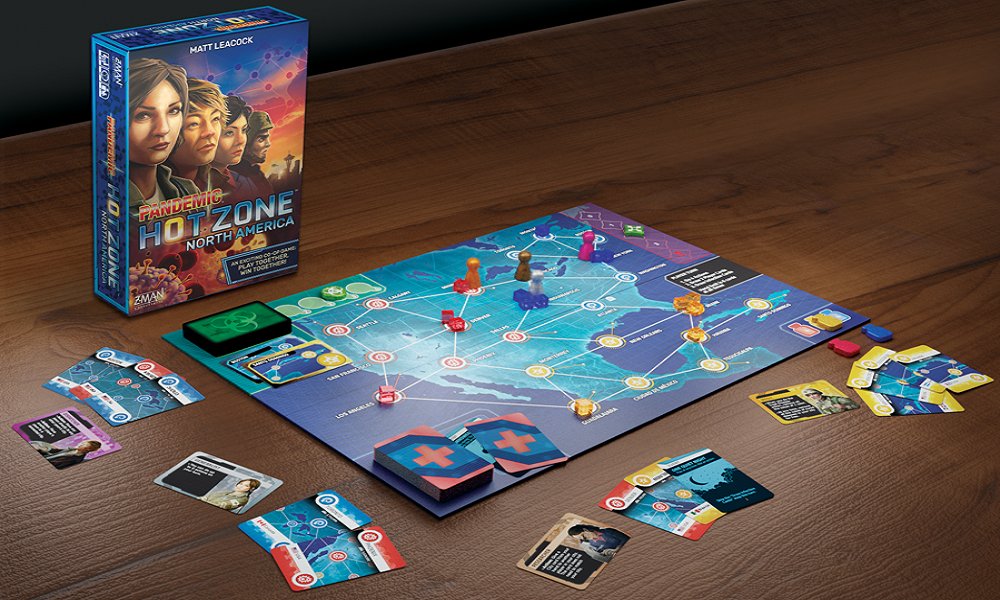 Lauded as one of the best co-op board games in recent memory, Pandemic is a game that, depending on your outlook, has been more relevant because of recent events. While the game’s seen many expansions and spinoffs, Z Man Games has created a bite-sized version of the medical race against time with Pandemic: Hot Zone, with the first edition taking place in North America. This version of the game is a cheaper edition of classic Pandemic, with some updated art and mechanics that will make it a hit with the casual market. 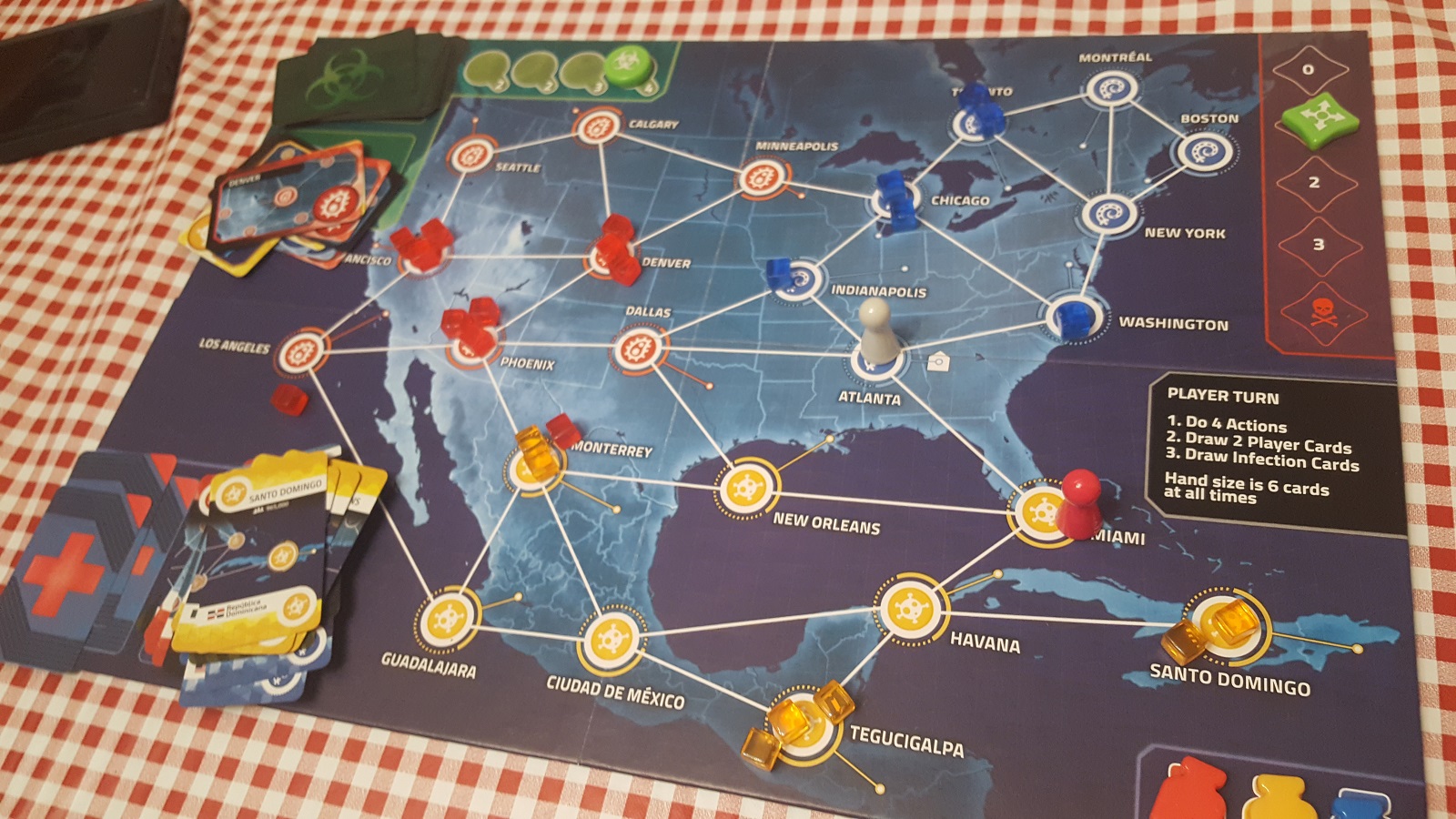 In Pandemic: Hot Zone, two to four players will work together in order to eradicate diseases that are plaguing Canada, the United States, and Mexico (hence the North America moniker). Beginning in Atlanta, you’ll have to travel to different cities in order to heal diseased locations and collect different colored city cards in order to create three cures. Four cards of the same color will create a cure, but you can only have six cards in your hand. During your turn, you will take four actions, from curing one cube to moving to adjacent cities to doing character-specific actions (like the dispatcher summoning other characters), you’ll need to strategize as a team. This is a game where all your cards are on the table, and you can speak freely with each other.

At the end of each player turn, you’ll have to pick random city cards which will get infected with respective cubes. Additionally, there are crisis and epidemic cards that will make your journey harder. If you exceed three cubes of the same color in any city, an outbreak occurs, and surrounding locations get infected as well. If you do this enough times, you’ll end up losing the game. 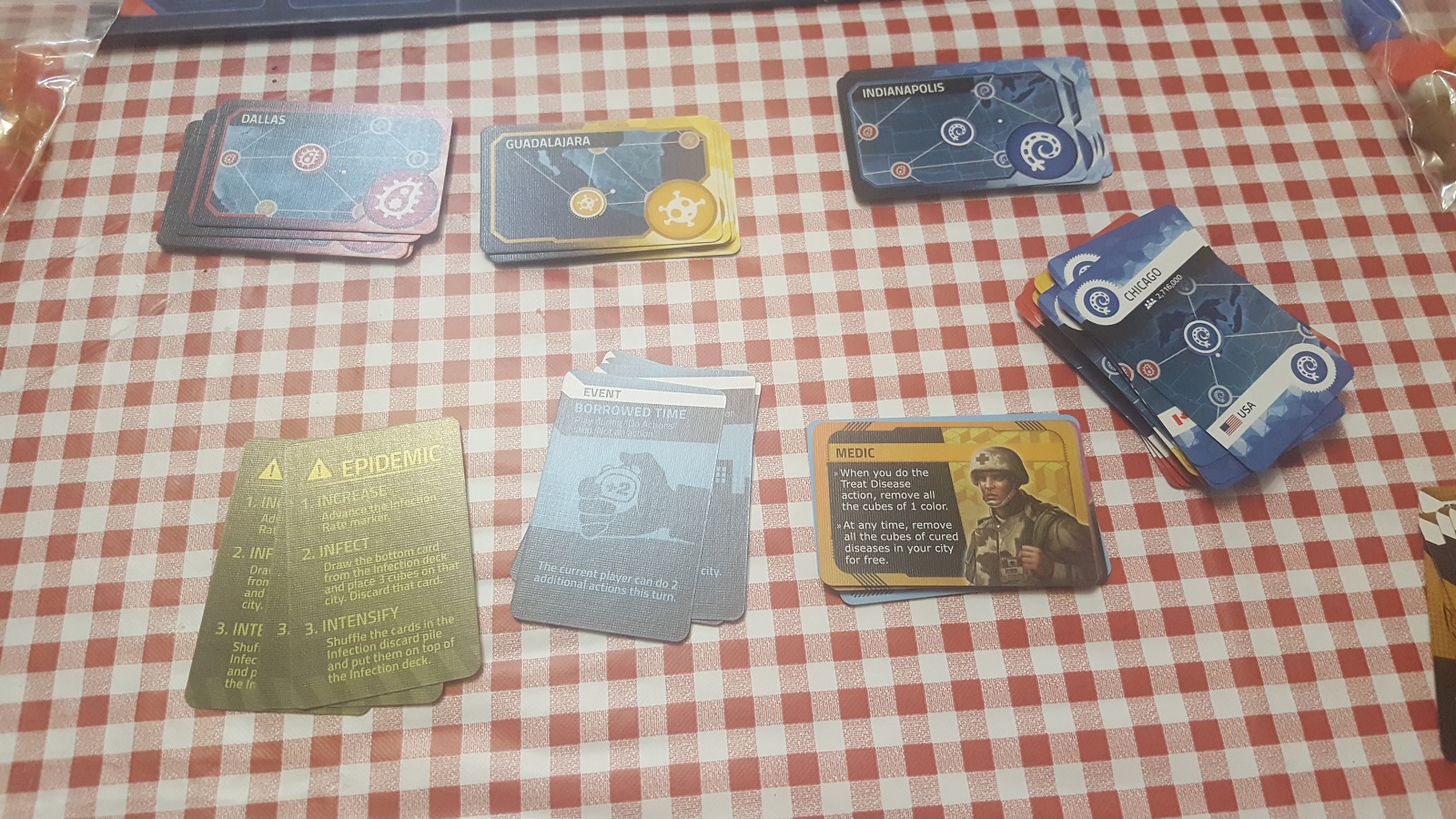 Now the differences of Pandemic: Hot Zone – North America and the original game relate to the accessibility of the product. First off, the game is considerably cheaper than the original (retailing at $19.99), and comes in compact packaging. The box is well made, and the components are relatively smaller than their base game counterparts (I don’t have a personal copy of the original game, but I’ve played it enough times with friends to compare the size). I love how portable Hot Zone is and will definitely lug it around to introduce my newer friends to the game.  I love the updated art, and the cards have a great feel to them; while smaller, they are clearly readable, and have a durable backing that will survive multiple playthroughs. 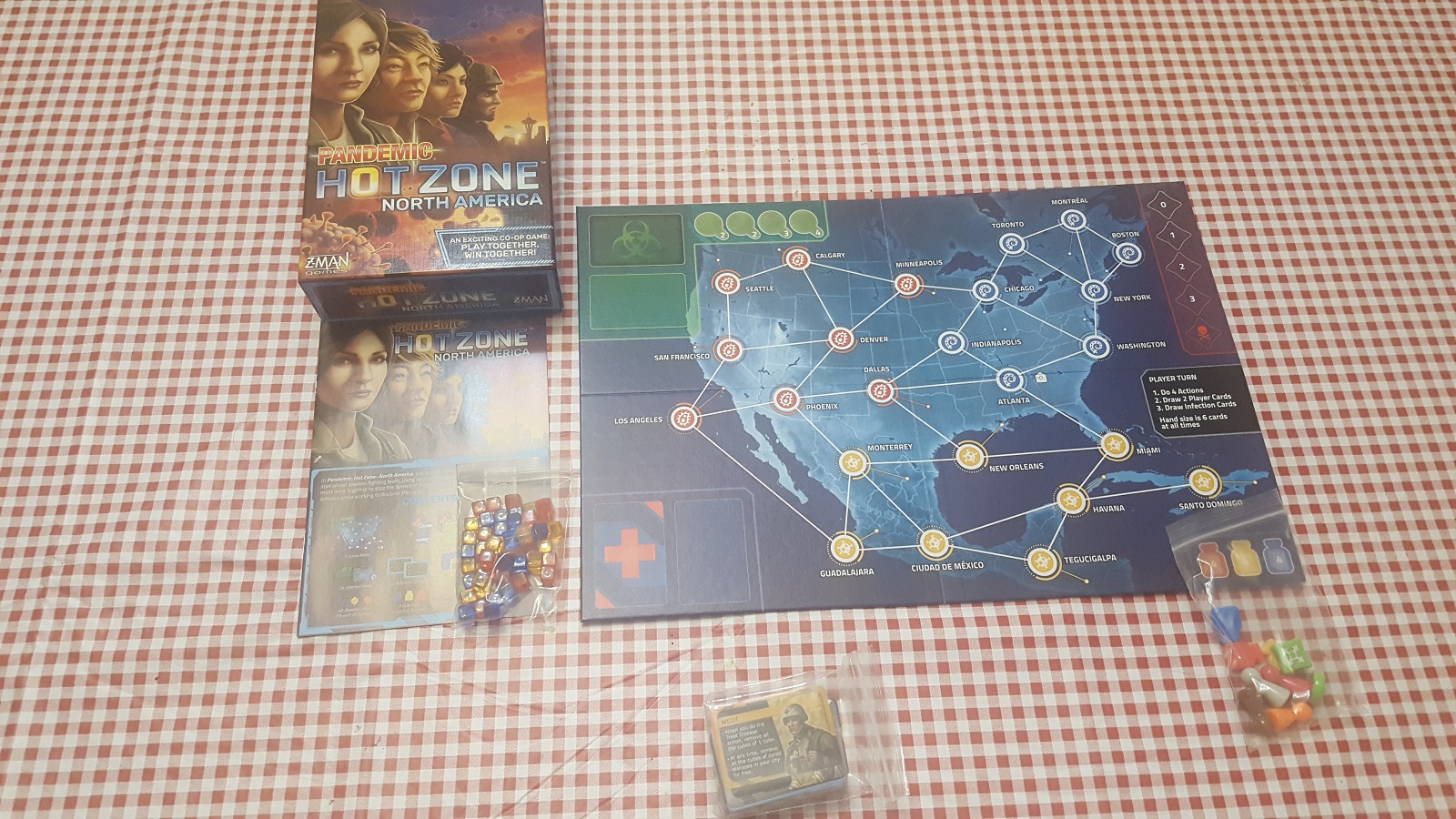 The domestic nature of Pandemic: Hot Zone also makes the game leaner in comparison, with a reduced number of character roles, crisis cards, and city cards. This is to make the game more accessible to a casual crowd, but it also means that the overall amount of content here will disappoint those who have already played the game for a long period of time. That said, there’s still a lot to enjoy since the main rules and mechanics are still intact. A lot of aspects were tweaked for balance purposes, such as the lack of ability to create research centers (you always have to find cures in Atlanta), and role powers accommodating a smaller board. The smaller play area also means that games will be finished quickly, which cuts a game to around half an hour. If anything, I feel like Hot Zone is a gateway for newer players to get a taste of the Pandemic experience and encourage them to pick up the full version and expansions. As it stands, this is a budget-priced version of a cooperative classic, and a cool little update with more continents hopefully coming soon.

Pandemic: Hot Zone – North America is a great way to introduce the co-op classic to casual audiences. While experienced players might not enjoy the shorter length of this title, its price point and core mechanics are great for small rounds.

Elisha Deogracias is an aspiring accountant by day, freelance writer by night. Before writing for Gaming Trend, he had a small gig on the now defunct Examiner. When not being a third wheel with his best friends on dates or yearning for some closure on Pushing Daisies, he's busy catching up on shonen manga and wacky rhythm games. Mains R.O.B. in Smash. Still doesn't know if he's a kid or a squid.
Related Articles: Pandemic: Hot Zone – North America, Tabletop
Share
Tweet
Share
Submit