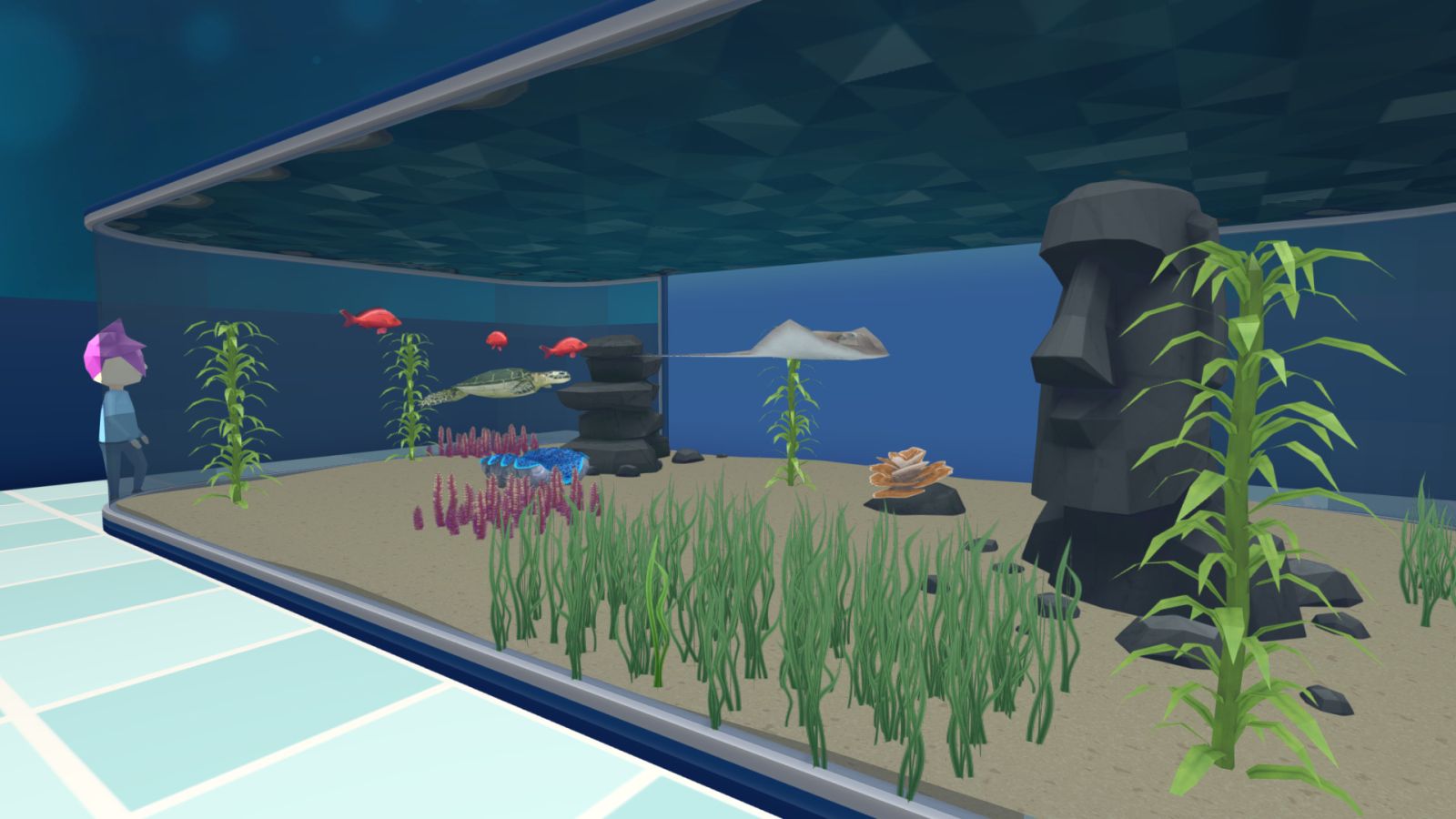 I review several hundred games a year, most of them about shooting people in the face, stabbing them with spears, or otherwise violently putting pointy things into their softer parts. It’s because of this that I need titles like Megaquarium in my life. It’s a quiet little simulation title about creating aquariums, filling them with bright and beautiful sea creatures, managing their environment, and wringing every dollar out of the pockets of your visitors. Let’s swim through the ring of fire and get this thing started, brother Shark Bait!

Megaquarium is split into two areas, campaign and sandbox, and four difficulties from Easy to Brutal, but the premise is always the same — creating beautiful aquariums and filling them with life. They start off easy enough with basic fish and basic tanks, attaching a single small filter and heater, and requiring very little attention beyond feeding the fish inside. The early fish, like the Azure Demoiselles, are friendly and don’t clash with anything else you’d put in the tank, so it’s an easy stable ecosystem. Like any good sim, you’ll place all of these pieces, as well as the pellet dispensers, tool stations, benches, and more as your heart desires. This is your aquarium to build.

As your tiny sea world expands and guests begin to trickle in, their interest in certain fish will yield ecology or science points. Ecology points unlock new animals, and science provides new equipment, tanks, facilities, and support objects. Hiring an aquarist or two to help feed your creatures and maintain your facility will help you open the doors, and then the real fun begins.

Accumulating enough ecology and science points offers an opportunity to research new fish and equipment. This can be a new combination filter and heater, or perhaps maybe a neon pink Orchid Dottyback fish to attract new visitors. You have to balance out their food, water quality, heat, filtering, whether they like caves, kelp, need lights, or other needs against that of their tank brethren. Once you have this delicate balance struck, you’ll have to watch it as these are living creatures that grow. That precious little moray eel that started off small will be more than capable of eating your $54 Yellow Tang after settling into your tank for just a short while. As they grow, their needs will grow with them. Rebalancing the ecosystem, heat, plant composition, and even what other fish are in the tank may be necessary as the creatures within reach adulthood.

Your team helps keep the place clean, and the critters fed and happy.

It’d have been easy for Twice Circled to go with a simple paper/rock/scissors method of pushing the player to balance equipment like filters against fish, but there’s much more nuanced than that. Some crustaceans don’t require food as they scavenge off of the leftovers of whatever the creatures in the tank leave behind, and as a byproduct, also help filter the water quality of the tank and keep it clean. By the third level, you’ll unlock coral, which require lighting and protein filtering, but some fish don’t like light, so once again the balancing begins. Some creatures are conspecific, meaning they’ll eat smaller creatures they don’t like such as smaller fish and crustaceans. Soon you’ll have fish that have armor on them, making them a little more hearty, even if there are bigger critters in the tank. It’s the circle of life, and you are responsible for their well being.

As your guests enjoy your aquarium, you’ll earn Prestige. Each critter, crustacean, and unclean corridor they see either adds to that Prestige or subtracts from it, and when you hit certain milestones, you’ll rank up. New milestones naturally unlock new creatures, tank features like algae, outcroppings, rock formations, and more. You’ll also unlock new technology like pumps that will allow you to locate your filter and heating equipment further away from the tanks, starting the cycle of rebalancing your tanks and environments once again. Soon your guests won’t want to see the plumbing, so you’ll have to design your space in an aesthetically pleasing way. Eventually they’ll want seating spaces, food options, drinks, shops, and other niceties to make their visit to your undersea wonder world a more engaging one.

Your aquarium can get rather large, but ultimately it’s configured however you’d like it to be.

There are a few little things that can be quality of life nuisances. Your guests seem to have a sixth sense about when you’d like to place a door, racing into the areas behind your aquariums. They do this as you have to remove a chunk of wall before you can place a door — you can’t simply place a door on top of the wall to replace it. A few sorting options would go a long way towards managing your pantheon of beasties once you’ve unlocked a few dozen, and similarly, it’d be nice to be able to further subdivide out the equipment and tank.

I did have one specific issue with my team of marine biologists that needs addressed — task prioritization. The team has specific skills like feeding, cleaning, and repairs, but there is no mechanism that I could find to prioritize their work, nor one to retask their current projects. This creates issues when they are busy sweeping up litter while your ultra-expensive reef shark starves to death in a tank nearby. It’d be nice to be able to give them additional tasks, lock them into specific work, or otherwise sort their tasking orders.

It’d be nice to be able further sort your critters.

One of the things I truly appreciate is Twice Circled’s approach to community engagement. They have put out a patch that addresses performance, but also adds minor improvements every week since launch. They are on the boards for Steam, helping modders, and looking for ways to further bring their game to life. Where I can see this game continue to grow is in new creatures, decorations, and new tank types like cylinders and large pool aquariums. The game is already an amazingingly fun and challenging title, but Twice Circled have also built a platform that can expand to your heart’s content.

Megaquarium is an fantastic tycoon title with a surprising amount of depth. With far more fish, crabs, sponges, and spiny blowfish than I could have expected, it goes further than the usual “set it and forget it” model that most tycoon titles use. The team continues to hammer away at improvements, so here’s hoping that they can iron out the last few UI and tasking issues to make this one truly great.

Ron Burke is the Editor in Chief for Gaming Trend. Currently living in Fort Worth, Texas, Ron is an old-school gamer who enjoys CRPGs, action/adventure, platformers, music games, and has recently gotten into tabletop gaming. Ron is also a fourth degree black belt, with a Master's rank in Matsumura Seito Shōrin-ryū, Moo Duk Kwan Tang Soo Do, Universal Tang Soo Do Alliance, and International Tang Soo Do Federation. He also holds ranks in several other styles in his search to be a well-rounded fighter. Ron has been married to Gaming Trend Editor, Laura Burke, for 21 years. They have three dogs - Pazuzu (Irish Terrier), Atë, and Calliope (both Australian Kelpie/Pit Bull mixes).
Related Articles: Let's Play, Megaquarium
Share
Tweet
Share
Submit