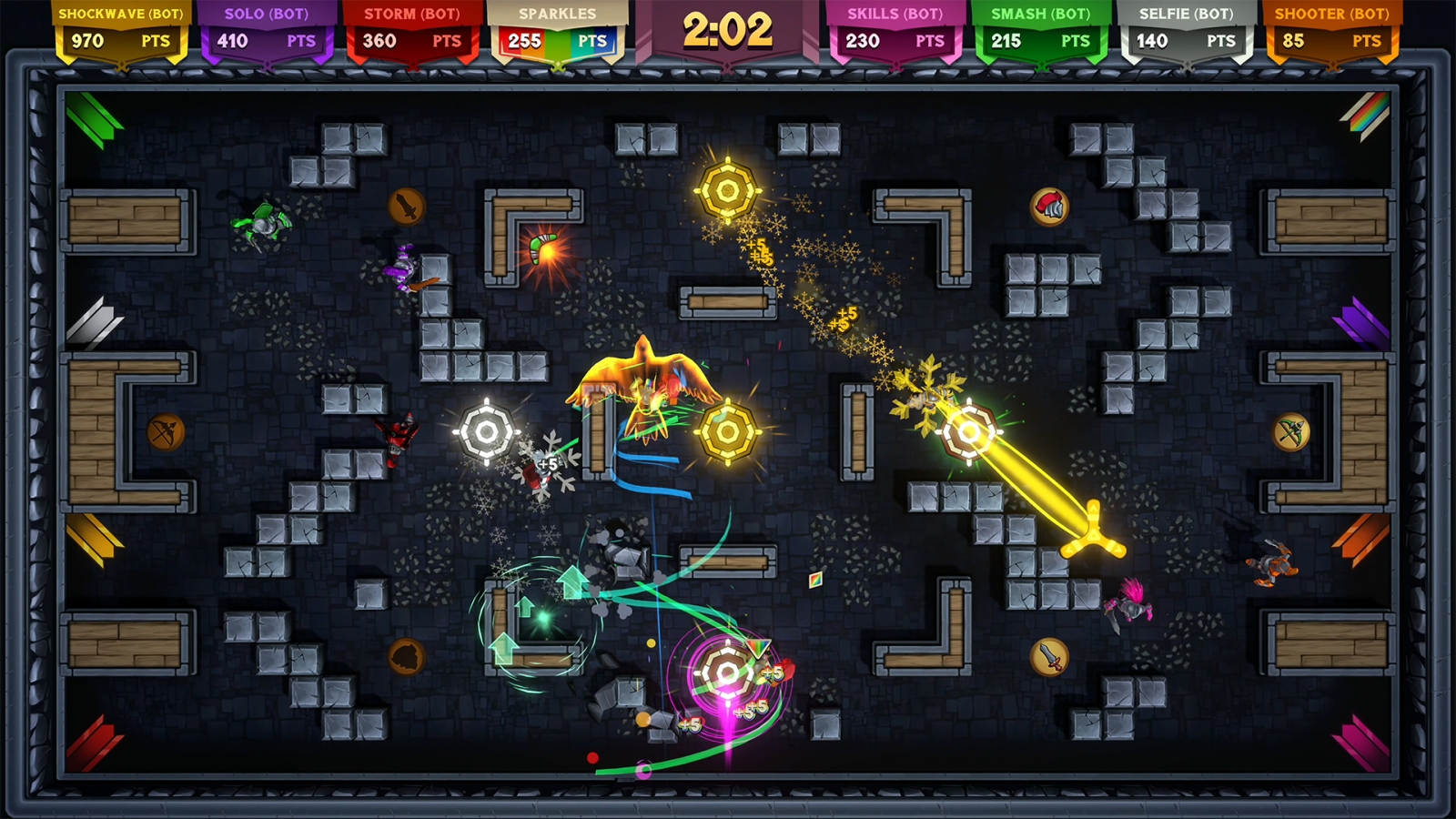 It is always a bit strange to review what is essentially a “party game.” There is no campaign or story to speak of, only a series of local or online multiplayer matches. I normally review single player campaign based games, so I’ll admit that I struggle a bit when it comes to these types of experiences. That said, Knight Squad 2 is an incredibly fun, if somewhat shallow, multiplayer extravaganza.

Knight Squad 2 is playable solo or via either local or online multiplayer with up to 8 players. If 8 players are not available then the game will replace the empty spots with bots of variable difficulty. There are two modes to choose from: Tourney or Simple Match. Simple Match allows you to choose the exact game type you want to play as well as set the specifics of the match, while Tourney mode will throw a variety of mini-games at you at the end of which the player with the most wins will be crowned the victor.

To break up the possible monotony from competing in the same – albeit varied – games, there are 16 knights you can play as. The catch is, not all knights are available from the start. Only 8 are available when you boot up the game, with the other 8 being hidden behind various challenges, including one unlocked by entering the infamous Konami code on the menu screen. 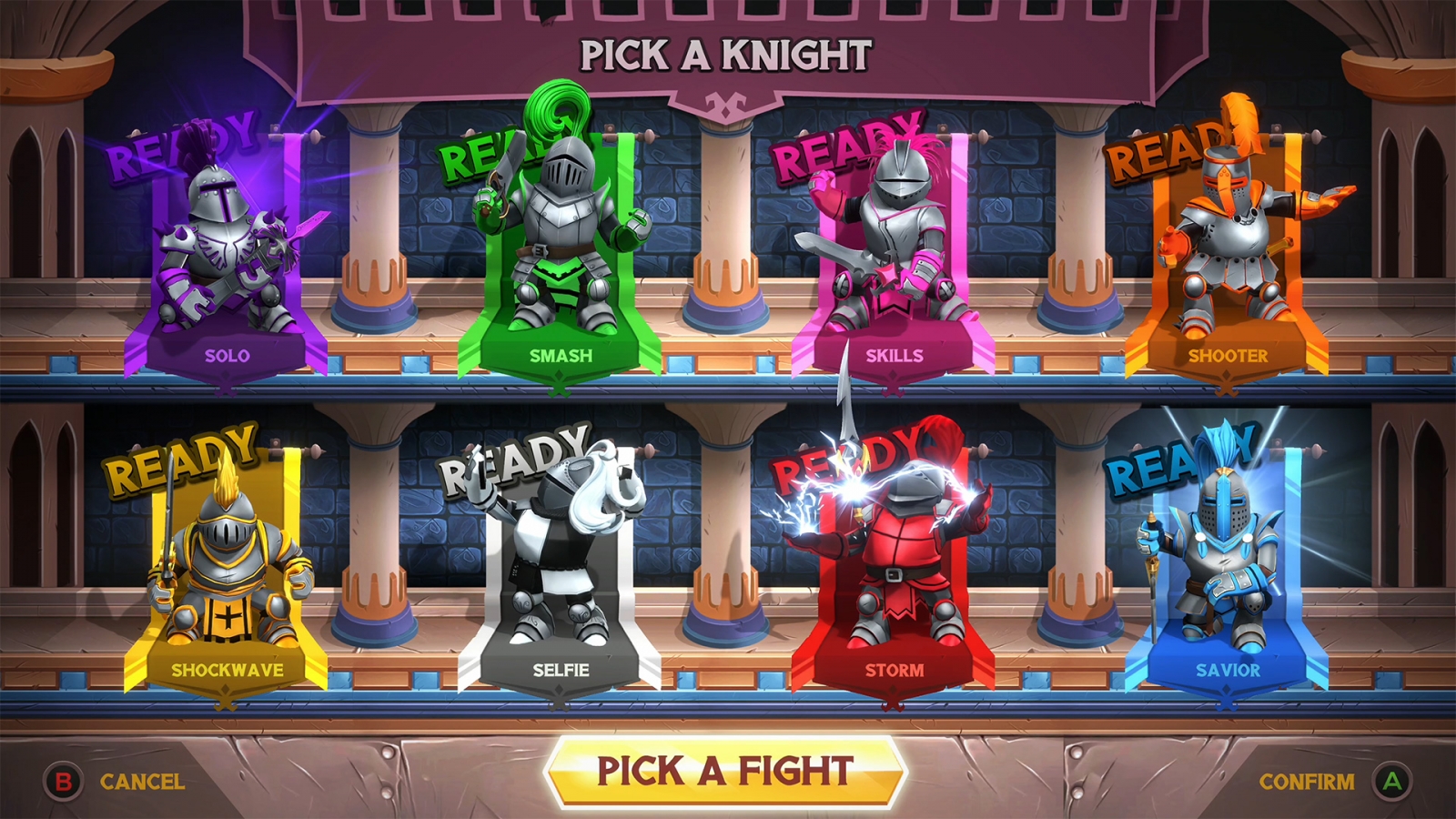 Each knight has their own unique personality and specialty, although most of these personality traits are more to allow players to feel they are given a choice rather than something that affects the actual gameplay. There’s a knight named Salmon, who is apparently a great swimmer; a knight named Savior who is a beast with swords, a knight named Selfie that…likes to take selfies? There are also knights imbued with specific abilities like the power to harness lightning, the power to create shockwaves, etc – although again, these abilities aren’t really used much in game. The main differences you notice while playing are the Knight’s colors, as that is the most effective way to keep track of where you are during the incredibly chaotic matches.In a game that has little more to offer than mini-games, it is important that those mini-games are fun. Thankfully, this is the area where Knight Squad 2 excels.

Upon beginning the game you are asked whether you want to play a local or online game. Local will allow you to choose your characters, the bot difficulty for the remaining spaces, and the team size/game type which has three options: free-for-all, squads, or duos. Free-for-all and Squads have game types specific to their modes while Duos does not. 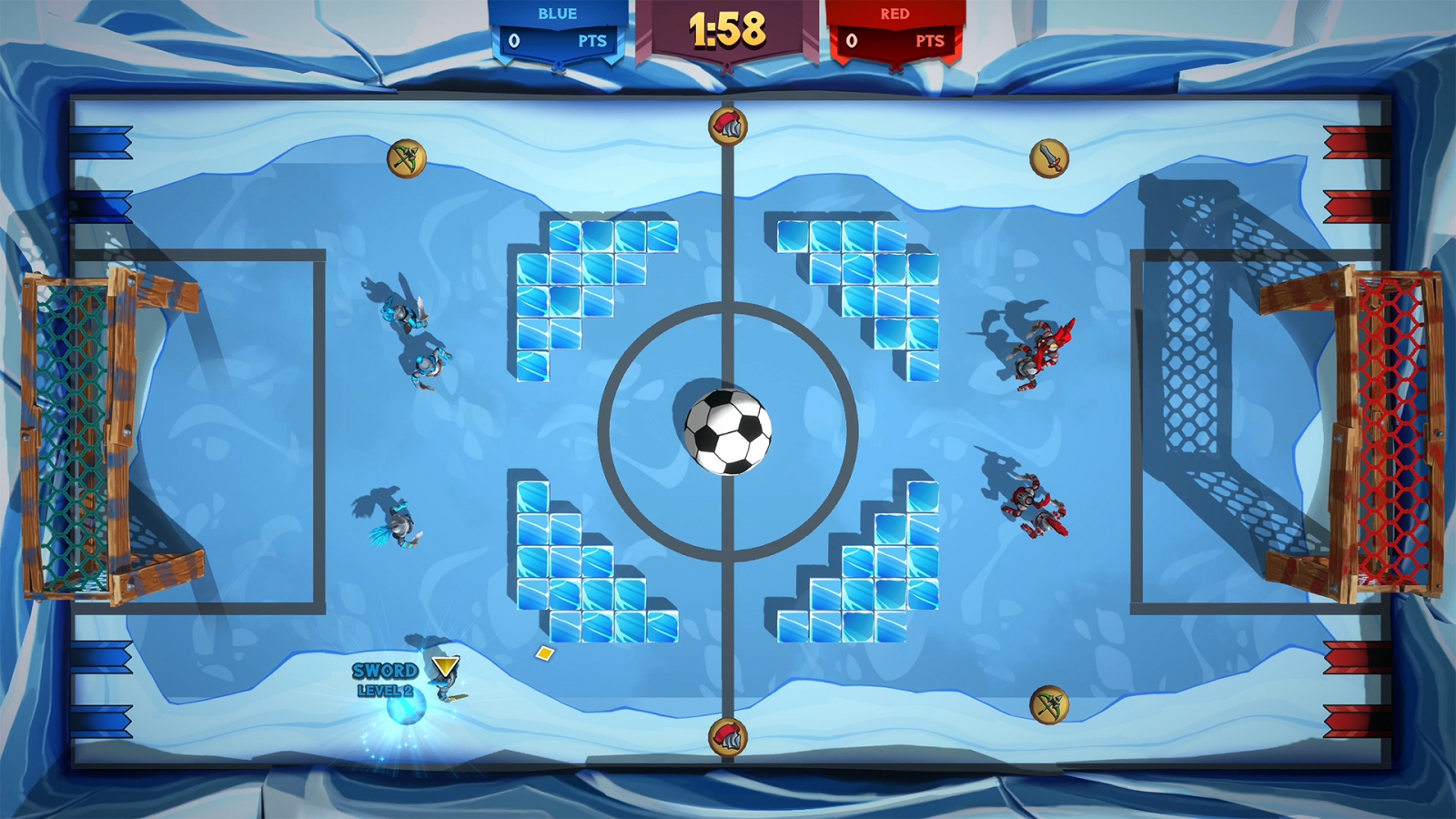 If playing online you are given the option to hop into a random game, join a private room using a room code, or create your own room. Creating your own room gives you the option to either make it a private, password protected room, or to leave it open for anybody to join.

Knight Squad 2  has cross-platform enabled online, so players from PC, Xbox One, and the Nintendo Switch can all play together.  Unfortunately, I had issues finding anybody online to play with. While I did see a few private rooms, I could not join those, and my attempts at making public rooms saw nobody join in most instances. Hopefully the game picks up a larger player base in the future.

If you select Tourney mode then you will be thrown into a series of random matches in which the player with the most wins will be crowned the victor at the end. These matches pull from all game types available and provide a nice variety of challenges and genuinely give players of all skill levels a chance to win a round. Odds are if you aren’t great at one type of match, there will eventually be a match that you excel at.

Free for all Modes:

During matches there are multiple spaces displaying a wide variety of weapon types. Running over a space will provide players with that weapon. Swords, bow and arrow, bazookas, drills, and ray guns are just a few of the weapons available. Surviving your opponents’ onslaught and managing to continuously run over icons showing your current weapon type will increase that weapons strength and abilities, adding a nice incentive to stay alive. There are also armor icons and special abilities, such as creating two of your character, which will give players a leg up on the competition. 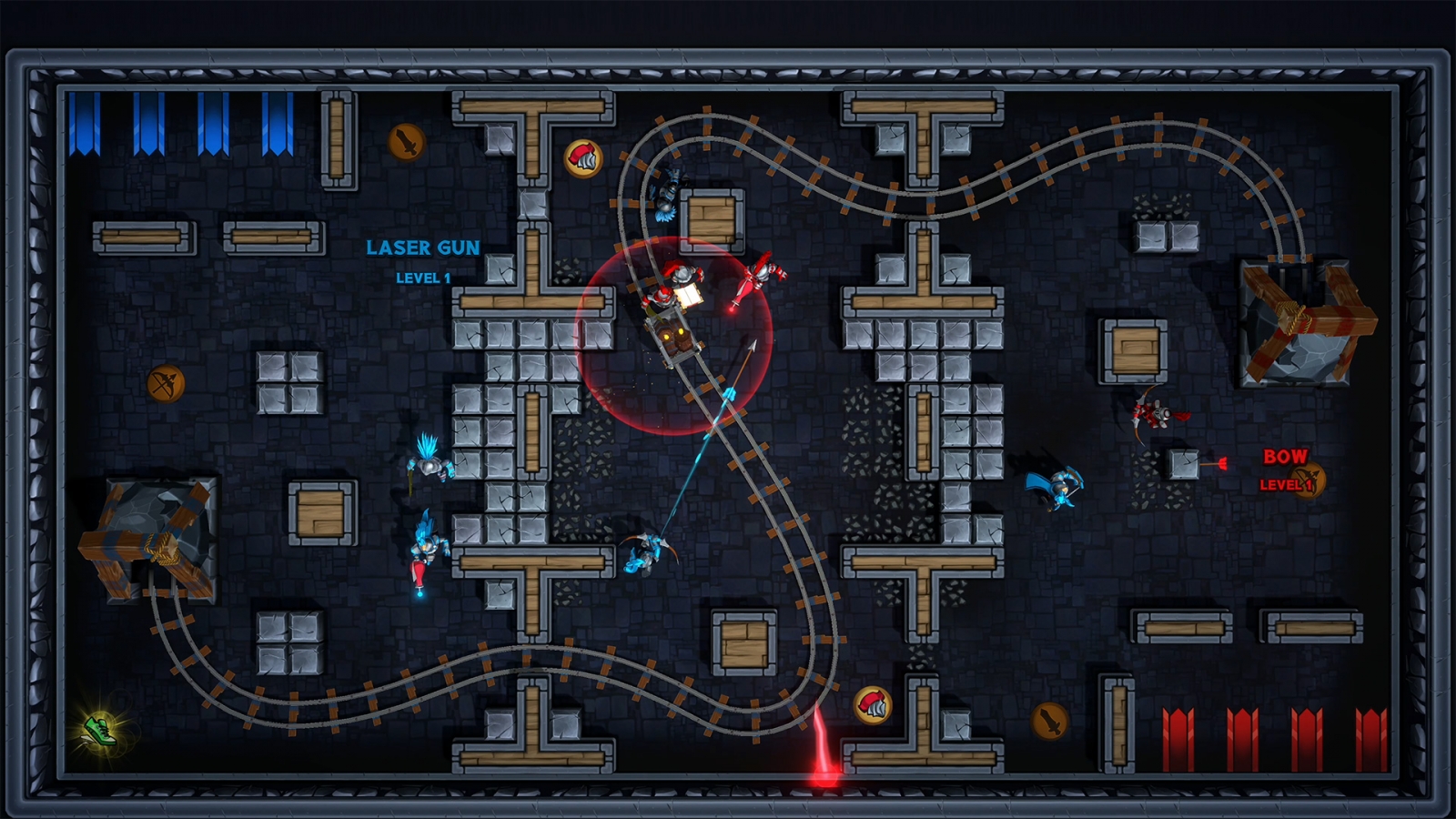 Matches are fast, fun, and full of chaos. It is hard to keep track of what is going on at any given time, and that’s the beauty of the game. It is made for competition and trash talking. Going after your friends just to ruin their kill streaks is great fun and swiping victory from the hands of an opponent at the last second will never become tiresome.

For most game types there is no real penalty for death, aside from the Battle Royale mode, so the game expects players to be aggressive to win. Charging through large groups, sword flailing wildly, is normally the go to approach to winning and rarely grows tiresome.Unfortunately, that’s all there is to the game. While there is a decent variety of game types, after a few hours of playtime you and your friends will most likely have seen all that the game has to offer.

Knight Squad 2 is a fun, competent, and chaotic multiplayer game great for parties, but features little to keep players interested beyond the few hours it will take to tackle all the game modes and unlock all the Knights. The addition of cross-platform play is certainly nice and a feature I hope more games implement in the future. A few more unlockables or even a leveling system for the Knights would have been nice, but as it stands I enjoyed my time with Knight Squad 2.

Richard Allen is a freelance writer and contributing editor for various publications. When not writing for Gaming Trend you can find him covering theatre for Broadway World, movies and TV for Fandomize, or working on original stories. An avid retro gamer, he is overly obsessed with Dragon's Lair. Chat with him via @thricetheartist on Twitter and @richardallenwrites on Facebook and Instagram.
Related Articles: Knight Squad 2
Share
Tweet
Share
Submit