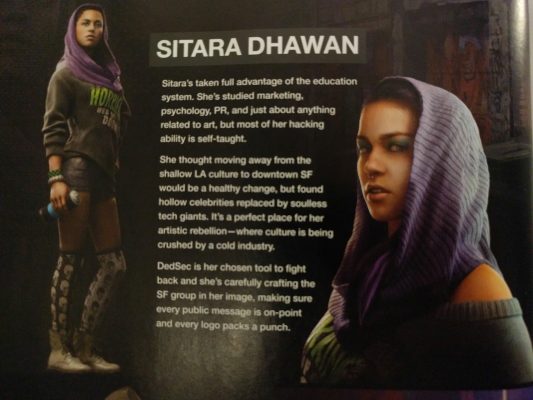 Cards on the table, I tend to be a little OCD about collectables in open world games. Ubisoft titles tend to have a bevy of collectable goodies tucked away in their open world environment. Watch Dogs 2 continues that trend with hidden research points, Key Data unlocks, bags of money, unique vehicles, and songs all waiting for you to uncover. With the Prima Watch Dogs 2 CE guide in hand, I started in on my hacking / collecting adventure.

First off, this book is a behemoth. At 447 pages, the hardback collector’s edition is stuffed from cover to cover with content. Kicking off the nine chapters is one of my favorite parts of the whole guide — backgrounds on the DedSec crew. Despite all the time playing the game, there’s a lot of cool background information you don’t learn in the course of the campaign.

These bios are great!

Like most guide books, the first few pages are focused on the basic mechanics of the game. The Prima guide pushes this a little further with some more detail around tricks like lane splitting, j-brake turns, and engine boosting. In fact, 68 pages are dedicated to all of the various mechanics in the game, including phone apps, hacking, and a whole section on how these mechanics are applied to the multiplayer portions of the game.

The next chapter is the meat and potatoes of the book, focusing on the main storyline of Watch Dogs 2. There are 14 main missions included, with each being subdivided into multiple shorter efforts. As Watch Dogs 2 is a free-form title, the missions can often be completed many different ways.

Each mission layout is shown from a top-down perspective, allowing you to plan out your approach, since there are many different ways to tackle your objective. The guide splits up different approach types and ranks them with a graph. The graph goes from 0% (Ghost) to 100% (Aggressive), offering up a recommended approach, as well as tips for how you might run any other selected method. Beyond the recommendations, the guide also gives screenshots of each area, providing another perspective to spot your objectives or collectables.

So many different ways to play.

When you need a break from the story-driven parts of Watch Dogs 2, a massive number of activities are scattered around the city. Drone, sailboat, eKart, and motocross racing all get eagle-eye views of the race path, as well as a short description and some suggestions on how you might complete them.

The multiplayer missions get the royal treatment as well.

Once you’ve downloaded the Driver SF app on your in-game phone, you can also do your best Uber/Lyft impression, picking up clients and taking them where they need to go. Unlike races, speed isn’t the only thing you’ll need to get a good rating. Unlike the real world where the driver will just beg you for five stars, in Watch Dogs 2 each mission will have its own conditions for success. This Prima guide outlines not only those conditions, but also details the ways you might drop your rating. It demystifies an otherwise shrouded gameplay mechanic and is very appreciated if you wanna snap up some extra cash this way.

While the online mode may have had a rocky launch, there’s a lot to like in that mode. These activities can be impromptu or selected as a mission directly. There are five types of missions — data breach, destroy shipments, deliver vehicles, prisoner release, or steal encrypted drives. Each of these modes gets a short description, but once again all of them receive a top-down view of the 20 different places you might encounter those missions. Some of these missions are fairly difficult (e.g. breaching a warehouse on Alcatraz) and the extra bit of intel makes planning a little easier.

The maps are extra detailed.

The last major chapter (the ninth is a checklist style appendix) is entitled Nudle Earth: Atlas, but more accurately it is a roadmap to all of the collectables in the game. Every research point, bag of cash, paint job, Scout X photo op, vehicle, and business are all detailed on the same maps you’ll find in the game when you open the Nudle Earth map. Better than just pins in a map, Prima has also gone to the trouble of providing screenshots and a short description of each, making picking up those hard-to-find goodies a snap.

As is normally the case for Prima guides, picking up a Collector’s Edition gets you not only a copy of the eGuide, but also some sort of game-related goodie. The eGuide’s interactive map is extra helpful for a second-screen experience. My only complaint with the eGuide is that there’s no mechanism to check off collectables you’ve found. When you look at the screenshot below and see how many you can pick up, it’s easy to see why that might be important.

I wish you could check these off and they’d grey out in the eGuide.

The goodie included with the Collector’s Edition of the Watch Dogs 2 Prima guide may by one of the coolest yet. Four large buttons are included that you can wear outside in the real world, rather than simply putting them on a shelf. The retro 50’s style pin is my personal favorite, but all four align with the meme culture portrayed in the game. You can bet these will be pinned onto my travel pack — time to let my geek flag fly.

Hell yes these are going on my bag!

At almost 450 pages, the Watch Dogs 2 CE guide from Prima Games is a massive guide for a massive game. Each section is logically presented from multiple angles, covering every play style, with an extra emphasis on missions and collectables. The pins make a great pack-in for the CE, but the guide does such a great job with the content that either one will get the job done.

Ron Burke is the Editor in Chief for Gaming Trend. Currently living in Fort Worth, Texas, Ron is an old-school gamer who enjoys CRPGs, action/adventure, platformers, music games, and has recently gotten into tabletop gaming. Ron is also a fourth degree black belt, with a Master's rank in Matsumura Seito Shōrin-ryū, Moo Duk Kwan Tang Soo Do, Universal Tang Soo Do Alliance, and International Tang Soo Do Federation. He also holds ranks in several other styles in his search to be a well-rounded fighter. Ron has been married to Gaming Trend Editor, Laura Burke, for 21 years. They have three dogs - Pazuzu (Irish Terrier), Atë, and Calliope (both Australian Kelpie/Pit Bull mixes).
Related Articles: Watch Dogs 2 CE Prima Guide
Share
Tweet
Share
Submit