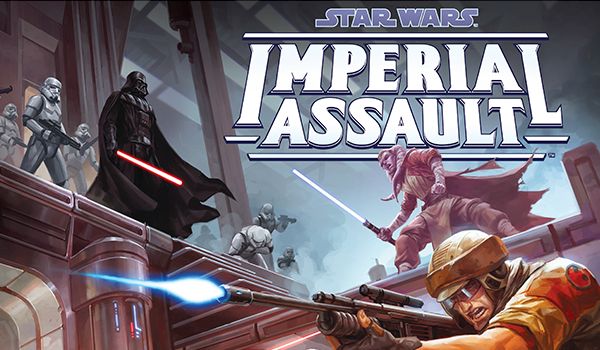 Leading up to the release of Imperial Assault during GenCon 2014, many throughout the boardgame world had for a while been openly and loudly wishing for a Star Wars themed version of Twilight Imperium, but turned out it was another Fantasy Flight Games classic, Descent, that got the Star Wars treatment. Borrowing heavily from the time-tested Descent game system, Imperial Assault allows players to recreate in rich detail the ethos of the Star Wars Universe. And it really is the perfect fit – the Star Wars movies are at their best when small groups of rebels are faced with very specific missions to accomplish, the rag-tag group of rebels up against seemingly insurmountable odds and the inexhaustible resources of the Empire. The beauty and theme of Star Wars come through not in securing resources, positioning fleets and political intrigues, but in distinct, gripping missions – the daring escape from Hoth, the Endor team destroying the shield around the second Death Star, Obi-Wan disabling the tractor beam, Leia and gang freeing Han from clutches of Jabba. And as a story-driven, mission-based game, with significant RPG elements, this is exactly what FFG delivers with Imperial Assault and, frankly, they make it look easy.

Imperial Assault is a tactical miniatures game based on the Star Wars universe where players take on the roles of iconic characters of the Rebellion and the Galactic Empire, as well as the “Scum and Villainy” of the Mos Eisley crowd of mercenaries and bounty hunters. The game takes place over a number of rounds, during which each player will alternate performing actions with one of their characters until all characters have activated. On an activation, characters will perform two actions including moving, attacking, using unique character abilities, resting/recovering, and interacting with objects on the board, such as opening a door or picking up a crate. In addition, Rebel characters can “exert” themselves to activate certain bonuses, which will improve their chances of success, but will tire them out and make it tougher to heal damage. The back and forth activations capture the feel of a gunfight and I am glad the Descent system of being able to split up “movement points” was preserved – it’s lots of fun to pop out from behind a wall, fire your blaster at a Stormtrooper, then dart back to the safety of cover. 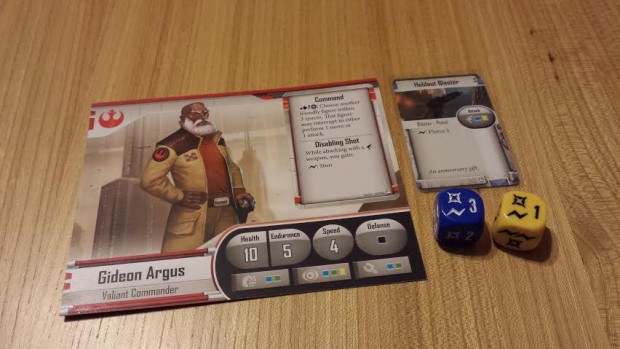 Attacking and defending are resolved by rolling dice and counting up “damage” symbols and “block” symbols. Bolt symbols on the attack dice activate certain special abilities for an attacker, giving fairly quick and deterministic combat a personalized and thematic flavor. Numbers rolled on the attack dice determine the accuracy of the attack – if you are four spaces away, you need to roll a total of at least four. Rolling high numbers is of course more difficult, so the farther you are from the target the harder it is to hit, while allowing for the occasional lucky shot. “Line of sight,” which determines valid targets for ranged attacks is cleverly and simply resolved by drawing lines from a single corner of the attacking character’s square to two corners of the target’s square. If both lines are unobstructed, the square can be targeted. Simple!

The game plays out on a modular grid-based board that can be customized depending on the specific mission or skirmish. Players prepare their game sessions by piecing together double-sided, numbered map pieces that fit together like a puzzle creating an enormous variety of settings from indoor/outdoor maps with AT-STs traipsing through the forest of Endor and a cabal of Stormtroopers hiding indoors, sneaking aboard a Star Destroyer running from Darth Vader and elite royal guards, to adventures on the sands of Tatoonine. This is really what I mean when I reference how “easy” FFG makes this all seem – from a relatively small cache of map tiles, there is a virtually unlimited variety of settings and battlefields evocative of not only the Star Wars universe, but of the specific scenario you happen to be playing. It all fits together perfectly and serves to drive the narrative of the game. 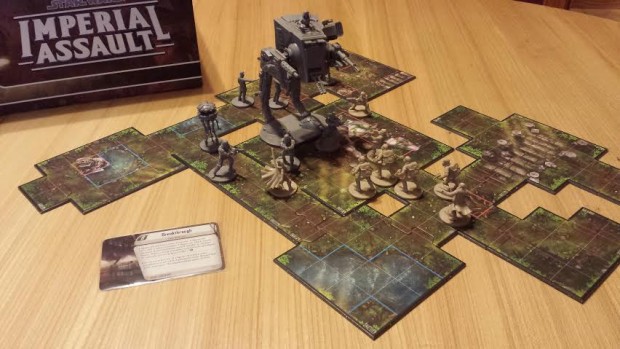 Imperial Assault offers two distinct game play experiences, an extended story-based campaign for two to five players and a scenario-based two-player tactical skirmish mode. In a campaign, one player acts as the forces of the Galactic Empire and up to four players take on the roles of various heroes of the Rebellion. The game unfolds with a simple starting mission on a relatively small map. The Rebel players discuss and plan their attack while the Imperial player acts as a force of nature, silently coordinating attacks, spawning reinforcements and surprising the Rebels with mid-mission plot twists. For the skirmish game, the gameplay is much like X-Wing where you will build your team from a single faction (Rebel, Imperial, Scum & Villainy) up to a certain point total and face off in direct battle against another player’s team.

For the campaign game, there are six characters that Rebel players can choose from, although only four can play at any one time. The heroes are characters that may not be immediately familiar to most fans of Star Wars, which can be off putting at first if you were envisioning a literal reenactment of the movies. However, by NOT having Han Solo et al. as “heroes,” it allows you to come into contact with these iconic characters over the course of gameplay and have them join your team, which is arguably even cooler. A campaign plays out over four main “story” missions plus a “finale” that weaves together a cohesive narrative. Depending on the results of each story mission, including the first, the next story mission will activate and reference what has come before, causing the players to embark on a distinct path, much like the old Choose Your Own Adventure books. In between the story missions, the Rebels will have a choice of side missions to go on, disconnected from the main storyline, but which give significant rewards. So the Rebels will have to make tough choices between having Chewbacca join your team or perhaps one of your characters receive a significant item. The side missions are drawn from a premade campaign deck of mission cards, generating further variety from campaign to campaign. Again, a seemingly simple design choice of a side mission deck driving variety, group rewards, and thematic gameplay is what makes FFG’s work on this game so impressive and so effortless. The Imperial player is in for lots of fun as well as he or she will gain influence points and experience to use on upgrades, imposing game conditions as well as sending the Rebel on forced missions that will unlock iconic villains such as Darth Vader and IG-88. 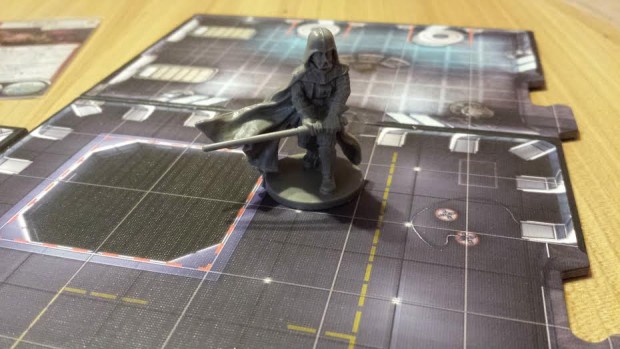 The skirmish game is heavily based on team construction, which is not surprising given what we have seen of X-Wing and other 2 player customizable card games. However, the map for each skirmish game is random and contains a unique set of objectives beyond just destroying the opposing figures. From a deck of skirmish cards players deal a random card which details the map and the specific parameters of the skirmish. Elements of area control, take-that, pick-up and deliver, and tactical battle are all seamlessly combined. The first player to a certain number of points (the same number as points allowed for building your team) wins the game. Destroying an enemy figure of a certain value will gain you a corresponding amount of points. However, things like controlling certain spots on the board, or securing certain resources or having the most figures in a certain room can all score points as well. Each skirmish takes on a specific flavor and becomes far more tactical than just a straight up brawl. 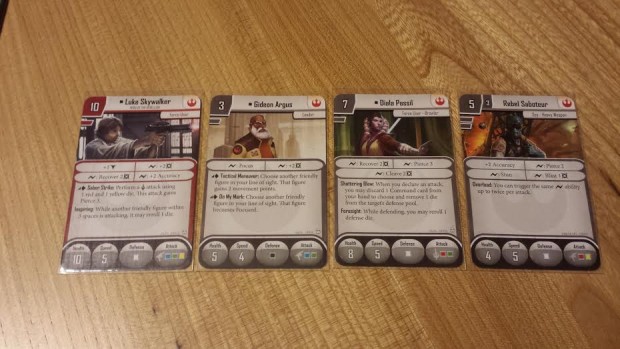 The skirmish mode is a far cry from a complex war game or even a complex miniatures game, and players expecting that might be disappointed. For example, a figure doesn’t have to be facing in a certain direction to fire, there aren’t really any location based combat bonuses and combat is fairly straight forward. Then again, that simplicity could easily be construed as a positive, making the gameplay sleek and thematic and keeping the focus on area control and coordinating the unique abilities of your characters.

On top of all this gameplay goodness, the components included in this game are simply stunning, with the centerpiece, of course, being the excellent miniatures of all our favorite Star Wars characters. The art on the cards is excellent, and oddly more pleasing than stills from the movies, which really would have seemed cheap. Honestly the only thing that would improve this game is if the Star Wars opening theme started playing everytime you opened the box. Actually…let me go get my old Star Wars soundtrack CDs. In any event, if you’ve gotten the impression that I really love this game, then you score high on reading comprehension. This really is one of my favorite games of all time at this point. It’s just that good. I go back and forth as to which is more impressive, the deeply thematic, story-driven gameplay or FFG’s design team for making it all look so darn easy. Imperial Assault is a tour de force of game production and it shows. It’s exciting to think about where FFG will be able to go with this game system, which, from the rapturous reception this game has received thus far, I suspect will be quite a ways.

Imperial Assault is a superior, top shelf title in nearly every respect. The game features stunning components, enormous variety, a rich and engrossing theme, yet remains accessible to a wide range of gaming experience and very easy to play right out of the box. No matter what your tastes, it's worth appreciating this game for what it is: the standard-bearer for the current state-of-the-art in tabletop gaming.