Crossover games have had a good history of bringing various separate worlds together. Games like Marvel vs. Capcom and Super Smash Brothers have been doing it for years. Wondering who would win in a fight between several of your favorite characters from different series is a question that you can answer in the arena. Anime characters have gotten this treatment in the form of the Jump games like J-Stars, but now we have the newest addition to the series, Jump Force.

Jump Force takes 40 characters from 16 series and throws them together, along with two original characters for the game. Shows such as Bleach, Hunter x Hunter, and One Piece have multiple representatives, while others such as Yu-Gi-Oh!, Black Clover, and My Hero Academia only get one. There’s a good variety in the characters, including their fighting style and appearances, but some people still might find the overall roster lacking or feel like other characters deserved to be in. With shows that have large casts, there’s no way that everyone could make it into a game like this, so it’s to be expected.

The combat revolves around light attacks, heavy attacks, grabs, special attacks, and ultimates. You can pull off combos with square and triangle, or even hold them down to charge stronger hits. Circle is used to grab, which is typically best used to deal with a guarded foe. Each character has three special attacks; they can be activated by holding down R2 and pressing either square, triangle, or circle. These can be anything from Deku’s Detroit Smash to Boa Hancock’s Pistol Kiss to Yusuke’s Spirit Gun and more. Special attacks cost energy to use, which is shown in a meter directly under the health bar. Energy is charged up by holding down R2 to perform a charging move similar to charging Ki in the Dragon Ball Z games. The bar can only reach a five stack maximum, which is more than enough to use several moves before you need to build it up again. As for ultimates, there’s a small meter in the diamond surrounding your character that fills as you give and receive damage. Once it reaches 50% or more, you can use your ultimate with R2 and X. On the other hand, if you want to save the energy, you can press R3 when it fills completely to gain stat boosts as the bar drains. 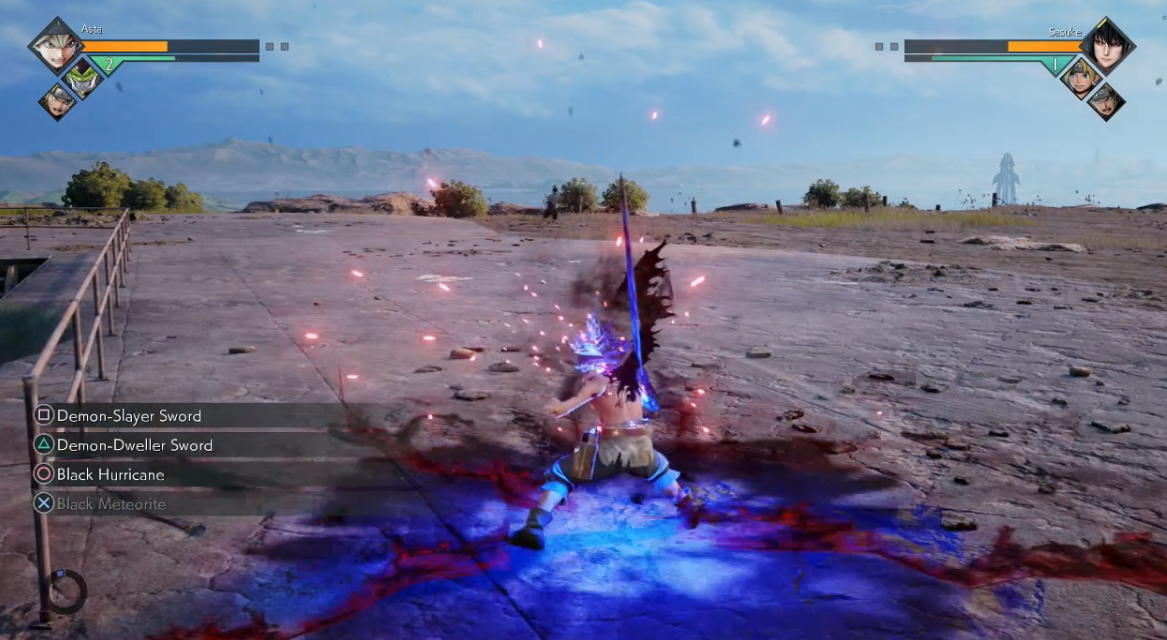 Fights take place in a three against three format, but there’s an odd choice with that: your entire team shares the same health bar. I played J-Stars Victory VS back on the PS3 and really enjoyed it, especially since each member had their own health bar. This gives you the feeling of a true team of three working together to win. In this game however, it feels more like you have one character with three different forms. Sure, you can hold down L2 to call in a teammate for a quick attack, but when you press L2 to swap, you’re stuck with the same amount of health. In team fighters, swapping to a new character should be like granting a second chance. It should represent their teammate tagging in to help them out rather than them having a weird connected life. It doesn’t ruin the game, but it does bring things down a bit. It feels like it deters people from trying out new fighters, because if they get beat down and need to switch back to someone they know, they have that disadvantage of the shared health. Having that backup that you’re good with is a nice safety net for testing out someone new. That being said, even though it can be a bit repetitive (which is expected in a game like this), the combat is still pretty enjoyable.

Now, the story has an interesting concept, but it doesn’t seem implemented as well as it could have been. During a battle between Goku and Frieza, an unseen civilian is fatally injured, and the only way to save them is a procedure that transforms them into a hero. It involves implanting something called an umbras cube, which has incredible power in it. Trunks said it was the only way to keep us alive, so why should we question our time traveling friend? This prompts the character creation, which I had fun messing around with; as soon as I see the option to change both eye colors separately in any game, I jump at it and take advantage. It’s a nice touch that lets your character stand out just a bit more. After Frieza escapes, you’re taken to a hidden base called Umbras that houses members of the Jump Force, which is made up of various fighters from the Jump Worlds. With your new power, you are recruited into the Jump Force, but you have to choose which team you want to join. You can join team alpha, beta, or gamma, which are led by Goku, Luffy, and Naruto respectively. Whatever team you choose determines your custom character’s starting moveset. I went for beta, so I got one special from Luffy, Boa Hancock, and Boruto, with my ultimate coming from Sanji. That may sound like a weird lineup, but I think it’s to show the mixture of worlds a bit, albeit it barely happening. Also, you’ll be able to unlock new moves as you complete missions and progress, so you can change up your moveset as you see fit. 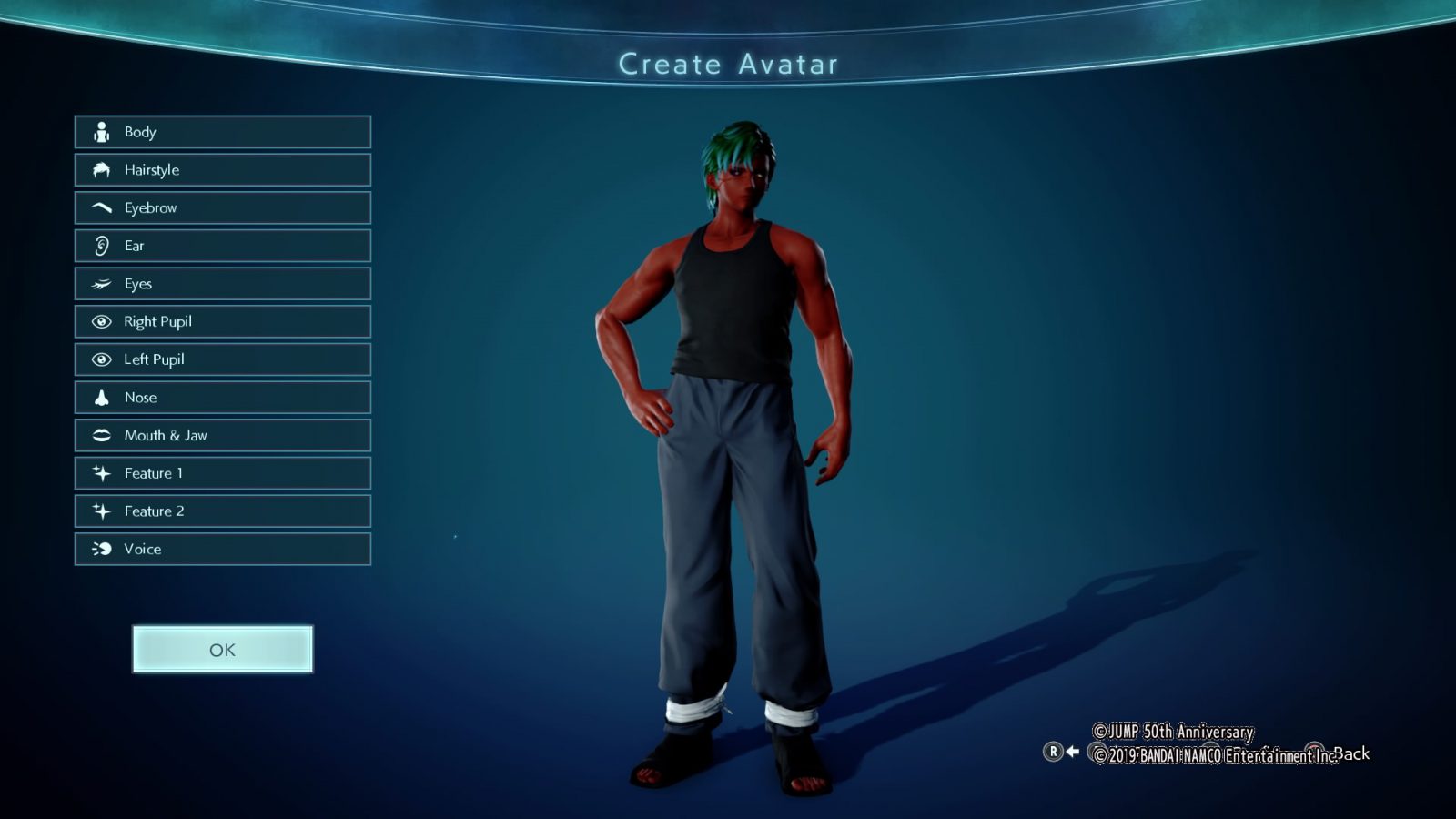 The story takes place with the Umbras base acting as a hub to start missions. There are mission counters in the four areas of the base: central room, alpha, beta, and gamma sectors. You choose key missions to further the story, which typically show you a cutscene to explain the scenario, and then toss you into a fight. This routine repeats over and over except for the times when you are required to explore the base to talk to teammates for their own special missions. It’s described as you “getting to know your teammates more” even though it follows the same pattern as story missions. The plot behind the missions boils down to finding and defeating the evil Venoms (generic enemies), fighting villains from various series, or beating up heroes that are being controlled by dark umbras cubes. At first it’s okay, but after awhile, it gets stale. You’re told “hey, there’s a substitute soul reaper wandering around this area, go check it out,” and you know it’s just going to be Ichigo being manipulated. Again, not terrible, but more variety and uniqueness would’ve helped tremendously.

In addition to key missions, there are also free missions and extra missions. Free missions task you with defeating specific teams of three that fit the title of that mission. These missions have recommended levels for your characters, so you may want to level your fighters before trying some of them. Fighters level up as you complete missions, so they’ll level up in no time. Extra missions are rare because they are tougher fights that reward you with raising the max level cap. At first, your characters stop at level 20, but that will go up after finishing the first extra mission. Depending on the mission, free missions can reward you with new moves for your custom character. That means more missions can help you add variation to your moveset. 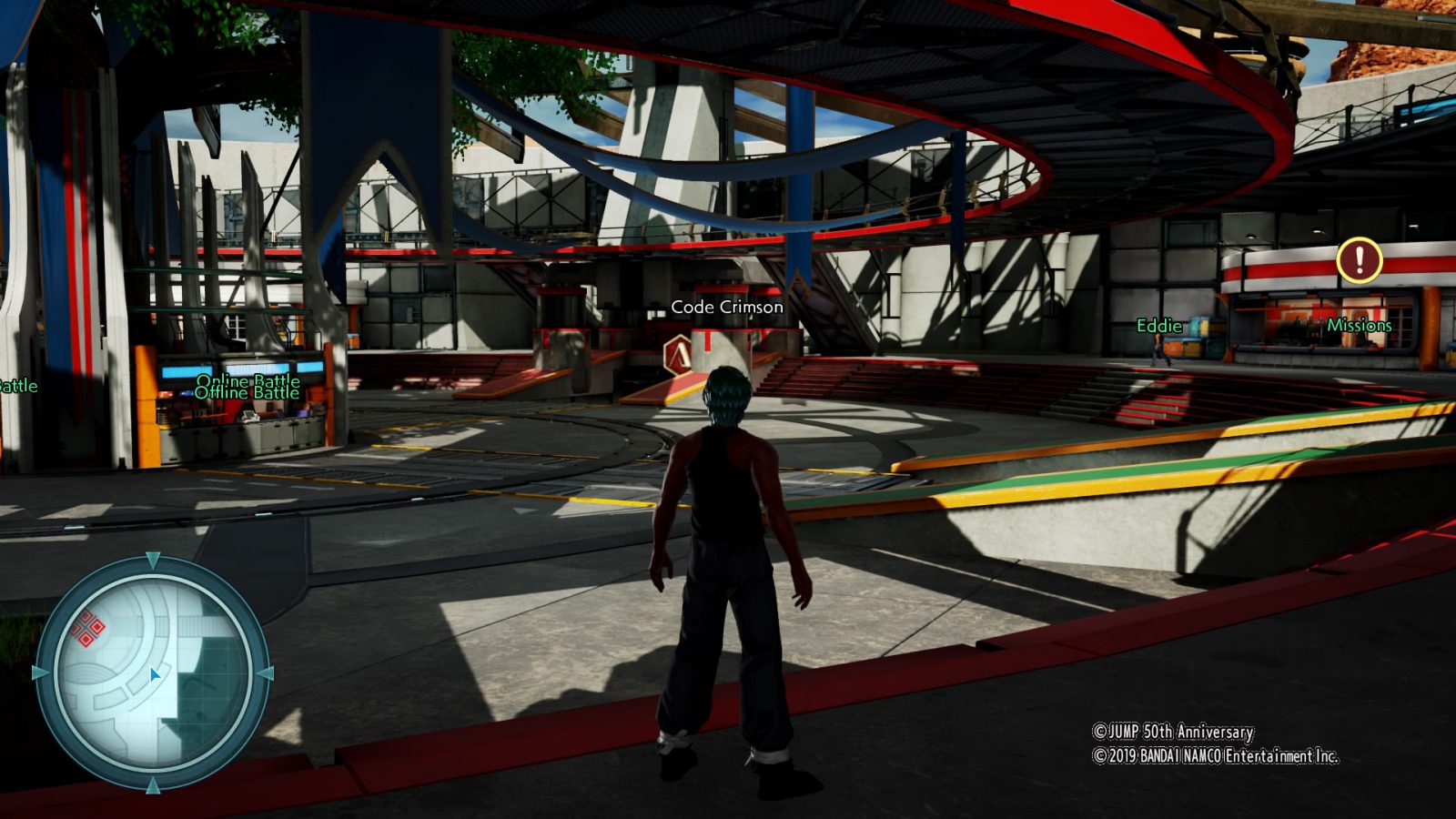 Fighting games always have an online following, so I made sure to try out some online matches after I got my bearings. Even though I didn’t win every time, I had plenty of fun taking on other players. I didn’t have any major connection issues or lag, which was really nice. The battles flowed as smoothly as if I was playing offline, but there were a few short moments where “communicating” popped up for a second in the middle of the fight, but it didn’t slow down the action enough to make a difference. In terms of online, you can’t expect perfect connections all the time, so take that with a grain of salt.

The character designs are odd to say the least, but that could be partly because characters of varying art styles are being place in a situation where they need to match each others’ designs. Some characters look glossy and look like they were modeled with plasticine, with practically no expressions conveyed during the cutscenes. They don’t need to be as expressive as their anime counterparts, but it’d be nice if Midoriya didn’t look sad all the time or Luffy didn’t look angry about life, just to name a few. You don’t notice it much during battles, but you can’t ignore it during the story. Alongside the designs, I will say that the voice acting is wonderful. You don’t have the option for English voices, but you do get the original Japanese voices with English subtitles. This is present in battle and in major story cutscenes, but is completely absent in the smaller scenes. Talking to characters in the base or during minor missions only gives you text boxes, which is a bit of a bummer since those are the majority of your interactions with other characters. 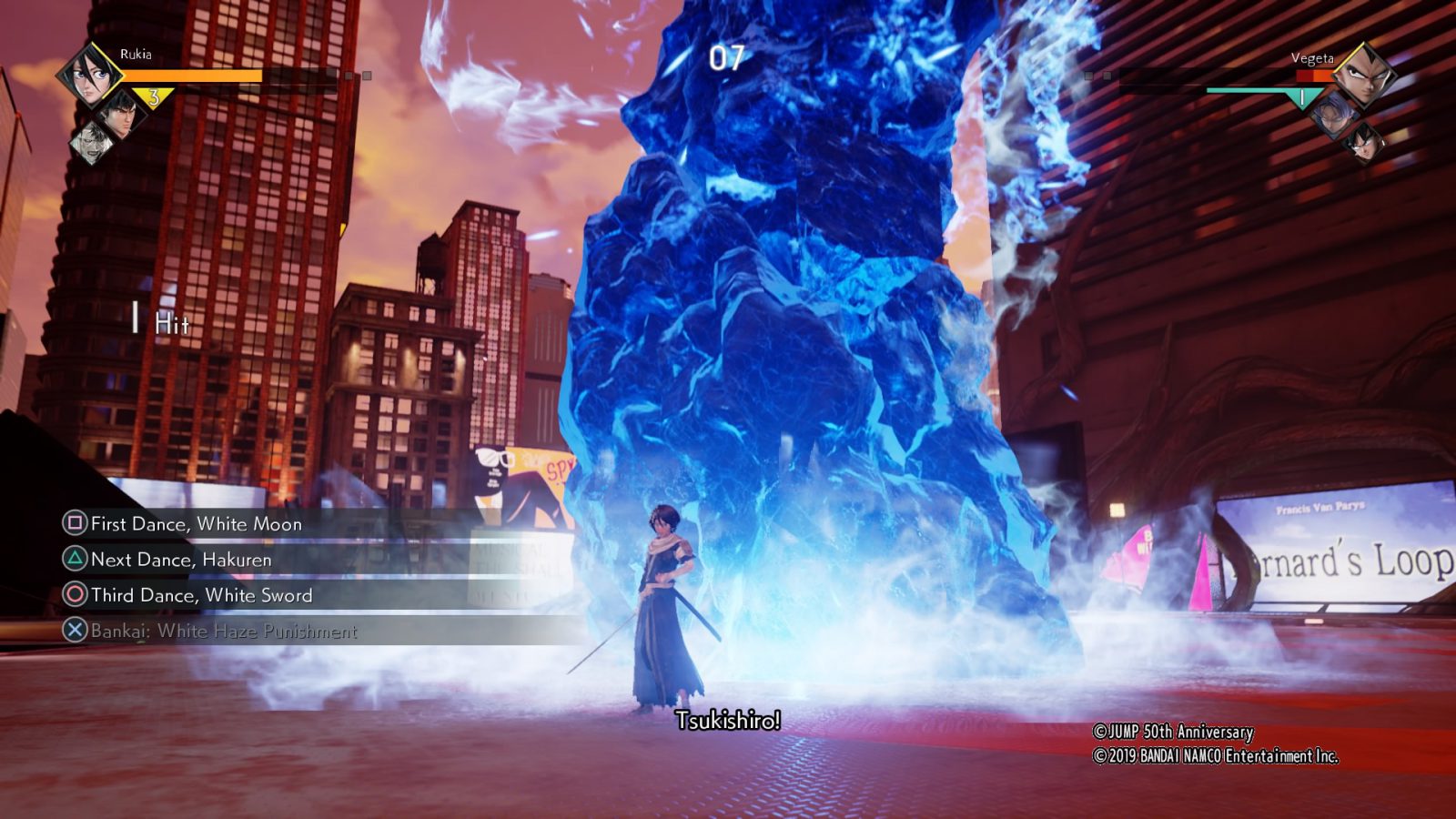 All in all, Jump Force had plenty of potential, but it falls short of what it could’ve been. The combat is solid and enjoyable, even if it’s a bit repetitive, while the story is extremely shallow. The large roster of fighters is cool to play around with, both offline and online. I’d be interested to see who else might get added in the form of DLC later on; it’s a fighting game, we all know DLC fighters will be available later. Even so, Jump Force is still a good fighter for what it is. If you don’t need an engaging story and just want to mashup some of your favorite anime characters, then Jump Force might be for you.

Jump Force is an interesting showcase for anime crossover fights. The story is very shallow and repetitive, but the combat is still enjoyable. Characters suffer from odd design choices, but the Japanese voice acting is great.

Codi loves to play video games and watch movies. He will watch almost any kind of movie just to experience them. His ideas take inspiration from the shows and movies he watches, and games he plays. He also loves a good pun.
Related Articles: Jump Force
Share
Tweet
Share
Submit