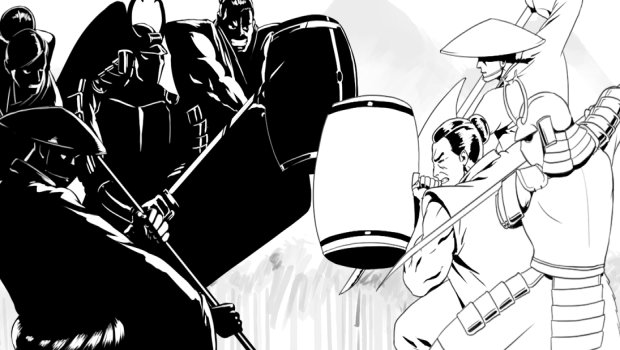 There are few games these days that allow for a group of friends to sit together in a room and just have some good ol’ fashioned fun: enter Black & White Bushido. Playing this stealth-em-up arena brawler with a group of friends is an absolute blast. Getting to see the look of complete shock on your opponents’ faces as your warrior appears, seemingly out of nowhere, to take them out is a feeling of pure delight. The slapstick-esque comedy of you and your friends repeatedly falling to your deaths on the unlockable level, Hell, provided me with some of the most laughs I have had while playing a game in quite some time. Playing by yourself on the other hand, doesn’t quite deliver the same level of enjoyment.

Black & White Bushido pits one to four players against each other in a battle between shadows and light. Players can pick from four different players models, which are essentially a cosmetic choice (there’s no discernable difference with abilities or playstyle), and battle as either light characters or shadow characters. In a match, players will be placed in a 2D arena that changes color from black or white at random times and in random areas, revealing or hiding players of each respective color. This mechanic makes each match feel dynamic, tense, and fun, and allows for less skilled players to stay competitive. Sneaking up on a player just to have your location revealed seconds before you strike is both devastating and hilarious.

Having some fun in Hell

The game comes with three different modes: challenge, deathmatch, and flag capture. Deathmatch and flag capture are the only ones that are really worth putting your time into, however. Challenge gives players goals to complete while playing the game, but comes off as more of a unneeded training mode rather than something players will go back to after getting good at the game. Deathmatch and flag capture, however, are both exactly what they sound like, and a lot of fun to play. Deathmatch isn’t anything crazy, it just provides you with an enjoyable time where you and your friends can run about killing each other repeatedly until one of you gets enough points to win; flag capture, however, is much more intense.

Flag capture plays almost exactly as deathmatch but with the added requirement of collecting flags that pop up at different locations on the screen. While the addition of flags wouldn’t be a big change if all you had to do was run over and grab them, you have to stand at the flag and hold a button until the flag fills up with your color. This gives your opponent plenty of time to run over and take you out; killing you, taking the flag, and stealing your glory. One of the best aspects of flag capture is that when you capture a flag, the background changes to show more of your color each time, to the point where the whole arena can be one color or the other. This gives every flag you capture that little extra sense of accomplishment, as you can see your success shown on the screen.

They are coming to get me

Unfortunately, the lack of compelling solo gameplay options might make the game disappear faster than any of the in-game warriors ever could. With the ability to play against bots, playing by yourself can be enjoyable for a little while, but quickly becomes unsatisfying when you realize that the A.I. in the game isn’t skilled enough to compete with you and will never be anything more than prey for you to hunt down. The addition of extra bots seem to make the game even easier as you have additional targets that you can quickly kill to reach the winning score even faster.

Playing this game against other players around the world sounds like it could be a rather fun time, but no matter how many times I tried, I was never able to get into a multiplayer game, with some wait times being as high as 6000 minutes. While this doesn’t reflect the game’s quality, as the multiplayer experience could be incredible, but with the game’s current lack of a player base, the mode that is most likely to keep me coming back to it isn’t an option.

The spawn points in the game are another cause for concern, as they can sometimes be a little unfair. Being killed at the bottom of the map only to respawn at the top, right next to the flag with your opponent nowhere near you happens a little more often than one would like. I don’t want to lose a close match because my opponent got lucky after I completely destroyed them in a head to head fight. The flags also constantly spawn in the same spot back-to-back, which can lead to some hilarious and mean jokes as your friends berate you with a cacophony of laughter and yelling. Most of time because you left the spot where the flag was just before it spawned, You were right there, why didn’t you just wait, you are terrible at video games. While this can be fun at times it doesn’t lend itself to creating fair match for everyone

Black & White Bushido is a very fun game to play with a group of friends, but doesn't deliver any enjoyable content for gamers who would rather play on their own. While some of the spawn points in the game can come off as unfair, most of the time the game delivers as an entertaining and exciting battle arena, that I can definitely see being a hit at parties.

Zach has been a gamer ever since he picked up a PS1 controller and played Asteroids for the first time. From FPS games to Point-and-click adventures, Zach knows no genre that he can't get into. When not playing games, he spends his time looking at the newest computer components on the market and dreaming of a day when he can buy them.
Related Articles: Black & White Bushido
Share
Tweet
Share
Submit