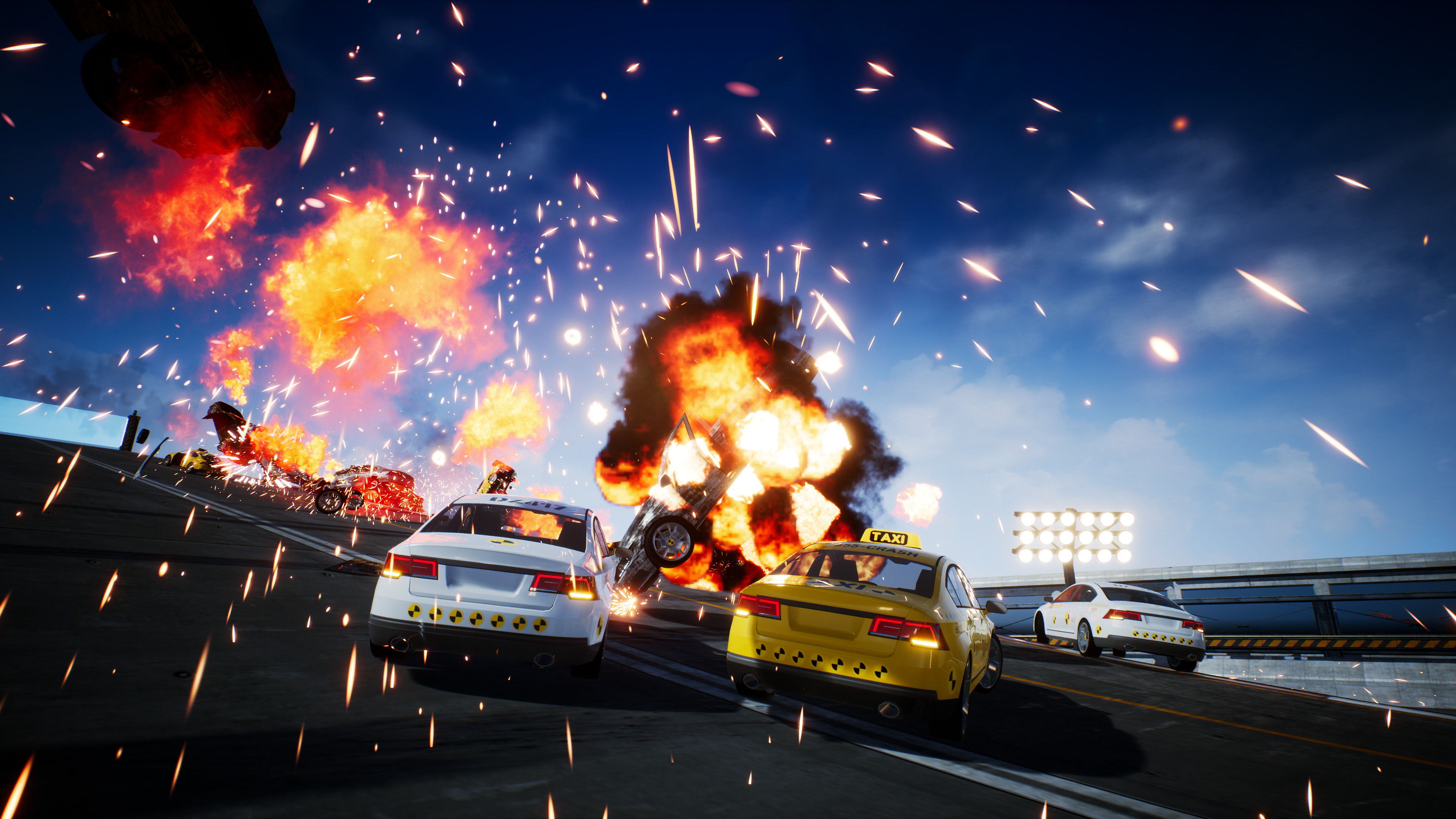 A nostalgic joyride –minus the joy.

While the Burnout IP continues to collect dust in EA’s secret underground vault, some of the minds behind the series have started their own studio, Three Fields Entertainment, and taken a crack at creating a spiritual successor with Danger Zone. Though the game is a somewhat barebones recreation of just one of Burnout’s game modes, it manages to pack a few hours of thrills that will make any Burnout fan very happy. Unfortunately, Danger Zone just doesn’t do enough to recreate the personality of the series it emulates, and oftentimes ends up feeling a bit lifeless.

If you remember the “Crash mode” in the Burnout series, then you’ll feel right at home with Danger Zone. As a test crash driver, you find yourself behind the wheels of a car with one objective in mind: wanton destruction. Crashing into cars and picking up collectibles gives you the ability to use a “Smashbreaker,” which causes a massive explosion to erupt from your vehicle, destroying everything in the vicinity and sending vehicles flying. You can also collect cash along the way in the form of pickups, which increase your score along the way. The game has 32 levels across four tiers of difficulty, each progressively more difficult than the last.

You’ll find yourself causing 100-car pileups in the middle of an intersection, juggling the burning wreckage of your car into traffic, throwing yourself from high elevations to rain down fire upon the vehicles far below you, and much more. All these actions rack up points on a counter which tracks the monetary costs of your carnage. Medals are awarded to you from bronze to platinum, and the more costly your destruction, the better medal you’ll earn. The formula is simple, fun, and packed with potential. Introducing absolute anarchy with reckless abandon is, after all, what video games are all about, amirite?

Unfortunately, the game fails to realize its potential in almost every conceivable way. Where you would expect a game called, “Danger Zone” to be brimming with personality, over-the-top gameplay, and Kenny Loggins, instead it’s often dull, filled with repetitive, uninteresting environments, and contains virtually no sound design at all. The game draws heavily on the idea that the player is in a testing facility, which for some reason, has chosen to crash cars, and so every level contains the same grey walls, plain segments of road, and similar scenarios to all of the over levels you’ve encountered so far. Instead of being given the freedom to control your car for long stretches of time and find new and interesting ways to interject yourself into each level, your vehicle is disabled as soon as you touch another vehicle in any meaningful way, or try to slow down, turn a corner, etc. Once your car is disabled, you find yourself desperately pushing the thumbstick in the direction you want to go and hoping that you get lucky enough for your vehicle to tumble into oncoming traffic. Sometimes you get lucky and things work in your favor, while other times your vehicle crashes at an unfavorable angle, and you’re stopped dead in your tracks. Instead of a pulse-pounding soundtrack or amusing commentary, you get dead silence aside from car horns and crashing sound effects, and almost no fanfare upon completion of a stage. No music, no cool sound effects, and very few to go on to figure out if you succeeded or failed. Despite a killer premise and a talented team to work with, Danger Zone often feels joyless.

Danger Zone is saved somewhat by the fact that it makes the player think carefully about how best to approach each situation. Which car should you charge into first? When is the best time to utilize your Smashbreaker ability? How can you best clog up an intersection to cut off the flow of traffic? These are all things you’re forced to consider carefully to best each stage. Unfortunately, many levels have obvious “right answers,” due to the fact that traffic comes statically and predictably, which minimizes your ability to really get creative, and your vehicle’s own short lifespan severely limits your options. Also, for a game that seems to require replaying each level multiple times to master its destruction, load times are a tad too long and there are too many menus that you’re expected to click through to get back into the game. If you expect me to try a level over and over again in short, thirty second snippets, then I don’t want to wait even a couple of seconds before I’m able to take it again from the top. In this case, I felt like my momentum was often slowed and I felt pulled out of the game too often while waiting through each loading screen.

Danger Zone isn’t a bad looking game, but it’s presentation is completely held back by its level design, which features the same tired environments again and again. Cars carrying cargo fly off highways, spilling their valuables all over the place, massive fires erupt from explosions, and scraps of metal go flying as collisions intensify — at times the game can be downright pretty. Which is why it’s such a bummer that environments aren’t more interesting. By the time the fourth tier rolls around, and levels start featuring more variety, the game is already coming to a disappointing end. The sound of Danger Zone, on the other hand, is one of the worst parts of the game, because there is very little outside of the most basic sound effects. If the game feels like it lacks personality before taking into account its sound design, then the sound design is the nail in the coffin of disappointment.

While Danger Zone provides some thrills and serves as an interesting revival of one of Burnout’s beloved game modes, it’s often too slow and lifeless to give fans the fix they were hoping for.

You know that jerk online that relentlessly trash talks you after every kill? That guy was probably Travis "Tie Guy" Northup. Competitive, snarky, and constantly wearing a tie, Travis has been writing his opinions about electronic media since he was a teenager, and is pretty much the only person to hold his opinions in high regard.
Related Articles: Danger Zone
Share
Tweet
Share
Submit