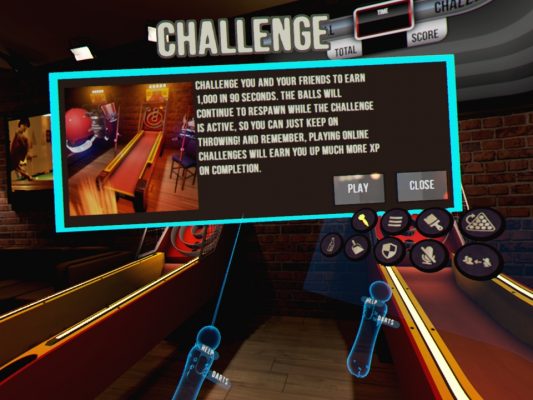 Admittedly, I’m a little out of my element. Studying martial arts never put me in the jock category, so I don’t exactly frequent sports bars, not even to watch UFC. That said, I have racked a ton of hours behind the pool cue, thrown plenty of darts, both fletched and plastic, and spent more than a few hours clacking plastic discs playing air hockey. In that vein, it’s only appropriate that I once again embrace my inner introvert and play all three of those social games in a virtual sports bar.

Sports Bar VR offers up the three games I mentioned — billiards, darts, and air hockey. The game starts you off in a tutorial room with three panels to teach you how to move. The tutorial is fairly vague (somewhat defying the definition of the word tutorial), leaving some things to self-discovery, such as pressing and holding select to re-center the VR view. The game utilizes two PlayStation Move controllers, though other than during pool you will really only use one. Leaving this little room takes you into the bar proper.

Sports Bar VR nails the aesthetic of a sports bar. The overhead multi-colored billiard lights, the jukebox playing generic rock and blues jams in the background, and a handful of patrons milling about the place. The patrons look like PS3-era mannequins, which can be a little freaky up close, but they are simply a backdrop for the games on offer here. Admittedly, the bar is a little empty, but we didn’t come to hang out with the masses.

Challenges for you and your friends

The controls are simple enough — you’ll use one button to teleport around the room (preventing motion sickness common with unnatural movement), and another to bring up a virtual menu system. Using the second Move controller, you can spawn darts, the pool cue, and even a beer. Teleporting around the room lets you see the bar, where you can tinker with the few interactive goodies beyond the games. There’s a short run of dominos to knock over, and you can pick up chairs, beer bottles, foam fingers, and even the jukebox and fling them about to your heart’s content.

I started my experience with Sports Bar VR at the dartboard. Using the Move controller, you take aim at the board and throw. Unfortunately, there is a very loose association between physics and what happens next. The darts rarely go when directed, frequently zipping unceremoniously into the ground or hurtling miles away from the board in all directions. I managed to hit the board a few times after some practice, but there was nothing approaching accuracy.

Heading to the nearby pool table, I was glad to see that things were a little more polished at this station. Using a Move controller in each hand, I approximated the movement of a break with a pool cue, scattering the pool balls across the table. After missing my follow-up shot, the AI appeared wearing a goofy party hat and a VR helmet of his own to take his shot. There is a remarkable amount of precision at play here, with a small laser pointer on the cue showing where your aim is currently, and a ghost strike spot indicating where the cue will hit. You can lean in on your shots (and yes, it’s hilarious when you fall over — virtual tables are not load-bearing), and the move controllers translate the linear force of your shot fairly well. Moving around the table with the teleport button, I lined up my shots, but for some reason, I was becoming less and less accurate with each passing game. My wife tapped me on the shoulder as I had become entirely misaligned with the table. As playing pool requires turning at angles and aligning your body to set up your shot, the natural tendency left me facing further and further away from the camera. This is where I was introduced to Hulk Mode.

Nearly every PlayStation VR game uses a long press of the options button to recenter the player with the camera. Sports Bar VR uses a different system entitled Hulk Mode. By pressing both Move buttons (the top button on the wand) simultaneously, the entire world can be shifted about to reposition yourself. It is the most disorienting thing I’ve experienced in VR to date, immediately making me feel nauseous. Playing pool requires constant repositioning, so it didn’t take long before I didn’t want to play pool any longer. While the game is fun, and it works fairly well, the Hulk Mode system was simply too much for me to handle.

Shifting over to air hockey, I grabbed the striker and challenged the AI to a game. Like pool, the AI is relentlessly good, and the player is somewhat hampered by being slightly out of alignment at all times. When I stopped trying to adjust the angles, I fought with the fidelity of the Move controller. Air hockey is a high-speed game, requiring fast movements to block incoming shots. With a little practice, I was able to slow down my movements so the camera could keep up, but it breaks that natural motion that VR relies upon.

The final game in the mix is Skeeball. We’ve seen Skeeball with motion controls in several games, so the concept isn’t new, but this was my first brush with the game in VR. Like the other games, when it works well it’s great, and when the controls get wobbly it all goes sideways. Sometimes the game interprets the smooth cradle-like motion of rolling the ball perfectly, rolling the brown plastic orbs up the ramp and to their target. Other times the same motion yields hardly any motion, feebly puttering to the ramp only to crawl back to the line.

VR Skeeball should be the highlight.

All of that said, on some level, Sports Bar VR works on the multiplayer side of things. Other players are represented by disembodied PSVR headsets with goofy hats. Doing well earns you new hats and pool cues, and the whole bar devolves into a physics demo as people play catch with the jukebox. Playing VR Skeeball with your friends evokes memories of a Futurama episode, and throwing beer bottles and chairs turns the virtual bar into a circus.

While Sports Bar VR captures the look and feel of a sports bar, the control scheme combined with Hulk Mode made me feel drunk, complete with hangover. The four games on offer are hampered by inconsistent physics, resulting in an unsurprisingly uneven experience. None of that, somehow, interferes with the game being a stupid-fun experience with friends.

Ron Burke is the Editor in Chief for Gaming Trend. Currently living in Fort Worth, Texas, Ron is an old-school gamer who enjoys CRPGs, action/adventure, platformers, music games, and has recently gotten into tabletop gaming. Ron is also a fourth degree black belt, with a Master's rank in Matsumura Seito Shōrin-ryū, Moo Duk Kwan Tang Soo Do, Universal Tang Soo Do Alliance, and International Tang Soo Do Federation. He also holds ranks in several other styles in his search to be a well-rounded fighter. Ron has been married to Gaming Trend Editor, Laura Burke, for 21 years. They have three dogs - Pazuzu (Irish Terrier), Atë, and Calliope (both Australian Kelpie/Pit Bull mixes).
Related Articles: Sports Bar VR
Share
Tweet
Share
Submit