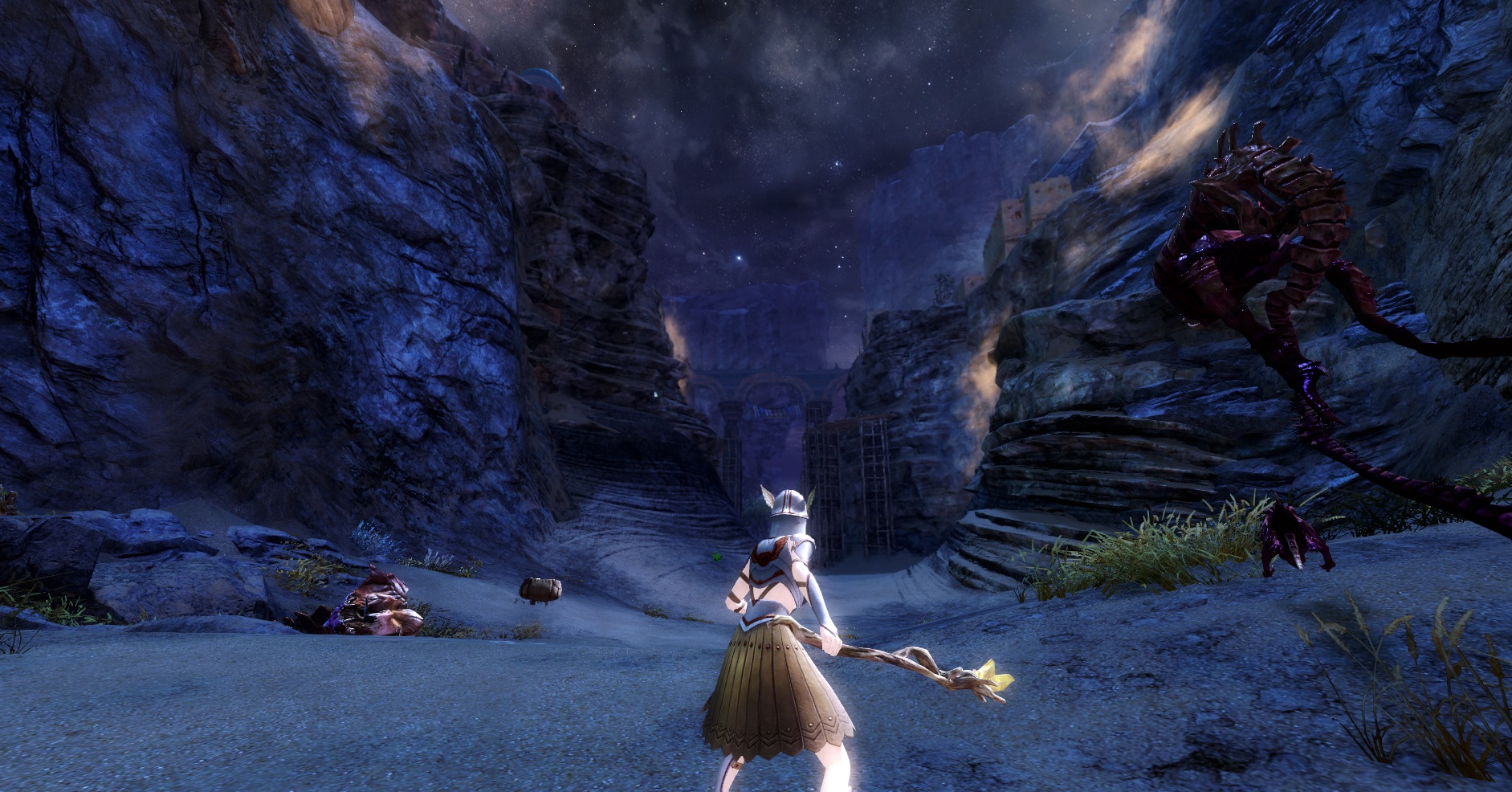 Guild Wars 2: Path of Fire is finally upon us, bringing a massive influx of new content and story to the land of Kryta. But is the addition of new areas, additional story chapters, mounts and elite specializations enough to make the latest expansion worth it for established players? The short answer is “yes,” and the long answer is coming right after the cut.

Guild Wars 2: Path of Fire (hereafter GW2:PoF) takes place after the final events of Heart of Thorns. One of the human gods – the god of War – has finally revealed himself after hundreds of years of silence. Rather than returning to inspire his human devoted, however, he seems hellbent on acquiring power for himself, even if it means bringing harm to the world of which he’s supposed to be a partial caretaker. With his forces amassing in the Crystal Desert, it’s up to the heroes of the world to put a stop to his mad plans.

Not quite as far a drop as previously seen, but I’m still not jumping.

With all this world-threatening calamity, however, comes a whole lot of fresh content for players to enjoy. On paper, the new additions are considerable: a brand new mount system, a new elite specialization for each of the nine professions in the game, five new open world maps to explore and quest in, new quest chains and equipment sets, and a whole lot more. Of all of this, the mount system is the freshest introduction: five distinct mounts that are tied in with the mastery system (which was broadly introduced with Heart of Thorns), and which offer distinctly different types of mobility to get around in the world. The mounts not only offer new ways to explore the world, but they actually are necessary to explore certain sections of the new areas in the expansion. It’s not only a nice addition to the game, but it’s good to see that the developers decided to put their own spin on the system, rather than just blandly introducing ‘beasts you can ride places’ that were otherwise identical to mounts in other MMOs.

The Elite Specializations are a great touch as well, and my personal favorite addition to the game. When it comes to games, I’m a mechanics junkie: I love trying out a new profession and finding out how it compares to the rest, and what individual contributions it can make to any conflict or raid. With GW2:PoF, the Elite Specializations I tried out (particularly the Necromancer Scourge) felt truly fresh compared to how the profession normally performed, as well as compared to the already released elite professions. These elites require learning a new style of play, complete with picking up a weapon that generally feels alien for the profession in question (axe for mesmer, torch for necromancer, and so on). I can’t testify as to whether these are all appropriately balanced against each other, but I had fun learning how to play the same character in a ‘new’ way, which is exactly what I was hoping for.

It’s like a trick Jenga puzzle but with more horrific godforsaken creatures.

One thing I noticed with the new content, however, is the feeling of a certain amount of ‘same’-ness compared to the previous Guild Wars 2 experiences I’ve had. When I picked up GW2:PoF, it had been a long time since I last left, during the Heart of Thorns expansion. But before long, certain things were familiar to me: the areas with ‘heart quests’ that required running around and performing some fairly repetitive tasks in order to ‘complete’ the area. Guild Wars 2 has always been a game with an emphasis on completionist tasks: exploring every single nook and cranny of the world, finding every vista, and so on. For me, after having faced down massive dragons and world-threatening calamities, having to run around and help out with glorified farm chores seems like a bit of a drag. This is a problem which has long plagued MMOs – the “being level 80 and killing a purple version of what you killed at level 1” experience – and even though it’s somewhat different in GW2:PoF, the end result feels the same.

Speaking of sameness, there’s another issue I had with this expansion: the graphics. This is a tough one to really complain about, because the fact is that the game still looks gorgeous at times. Purely on an environmental level, the varied architecture and outdoor sights throughout the new areas can be breathtaking to behold, as can the sheer presence of some of the larger enemies. But once you start to get nice and close to the enemies – once you develop an eye for detail – a bit of the graphical age of the game starts to become apparent. It’s probably enhanced in part by at least some of that all-too-familiar experience with some of the exploration and questing parts of the game, but it’s something which started to nag at me. A sense of overfamiliarity with the game’s graphics, on its own, is no big deal. But when both the graphics and the content seem “solid, but expected”, the result is a slight feeling of being let down.

Getting knocked around by some of the local pains-in-the-neck.

One thing to keep in mind, however, is that I’m coming at GW2:PoF more as a visitor than as a fully invested player. Even though I was around for launch, I ultimately drifted away from the game well before Heart of Thorns came out; I killed my share of dragons, explored some fragments, and then moved on to other things. This time around, after finally managing to discover the difference between ‘Content I didn’t remember seeing before’ and ‘Content that is actually new and part of this expansion’, I started to realize: Guild Wars 2 has its share of devoted players. And I get the sense that the content was crafted more with established players in mind, for people who already enjoy and are invested in the world, the existing systems, the lore, and more. For the true veterans who had exhausted Heart of Thorns before Path of Fire came out, the experience – and standards – are likely different.

There’s content that I’m leaving out the details of, like the bounty board system (which allows players who have completed the ‘hearts’ of an area to spawn a group encounter for the world), along with the greater details of the plot (to be honest, I’ve never been a fan of GW2’s style of story.) But after having returned to the game after so long, there’s one point I want to make for any prospective player of the game: ArenaNet long ago promised to continue to add abundant amounts of free content to Guild Wars 2 during its life, above and beyond any expansion packs they eventually released. Every time I return to the game, there seems to be a veritable mountain of changes, new adventures, temporary advance, world-shaping plots and more that I’ve missed out on, and which frankly baffle me, but in a good way. As controversial as it is, I think one of the most important qualities of a modern game is developer commitment. Are they invested in their product enough that they’ll push effort into it, building on it and refining it, even after the shrink wrap is on the box (or the file is on the server)? ArenaNet certain passes that test with flying colors, and if you’re one of the people who has made Guild Wars 2 your MMO of choice and are eager for more adventures to have and lands to explore, then Path of Fire certainly seems like a must have. Frankly, you’ve probably already bought the expansion if you’re one of those people.

ArenaNet knows how to do environments, if nothing else. Even the ruins are pretty.

For everyone else – for anyone who hasn’t played Guild Wars 2 but is considering giving it a try – then my verdict is: it’s a solid, if slowly aging game, which its developers continue to build on. The principal complaint I had with it is a sense of broad similarity to what I’ve already experienced with the game, and that’s not an issue any truly new player would have. For those of you who are looking to give it a shot, there’s a free trial available at this link. Give it a go, and find out for yourself if you’d like to make Guild Wars 2: Path of Fire your home for a while.

Guild Wars 2: Path of Fire adds a plethora of content to an already solid game. A must-have for players still enjoying their time in Kryta, and the inclusion of an automatic max level character makes it enticing for new players as well.

Victor Grunn has been a gamer since the days of single-button joysticks and the Atari 800XL. When not lamenting the loss of the Ultima series or setting people on fire in Team Fortress 2, he's an aspiring indie game developer and freelance writer.
Related Articles: Guild Wars 2: Path of Fire
Share
Tweet
Share
Submit