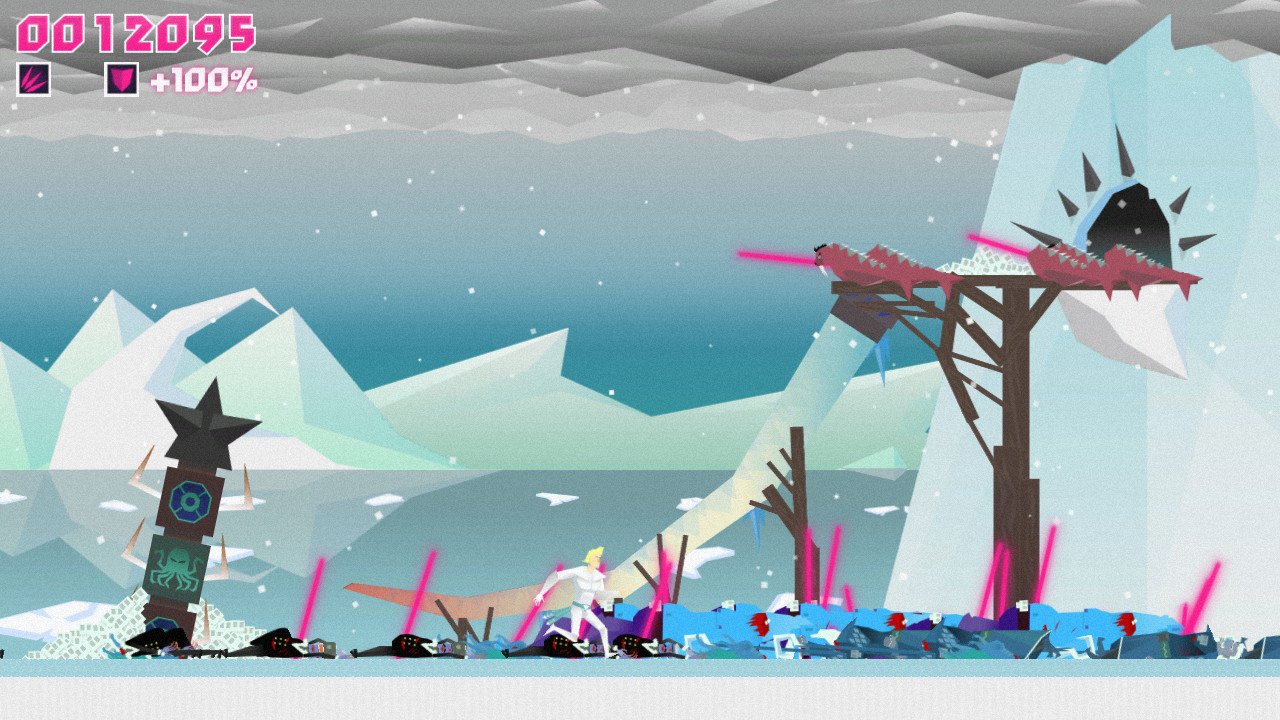 Lichtspeer is a weird game, and for the most part, that works in its favor. Accessible mechanics and groovy graphics make for an odd experience, and I still can’t understand how to explain the premise in a way that makes sense. The Switch version, with the added subtitle “Double Speer Edition”, has some exclusive content, but is it enough to warrant another purchase if you already bought the PC or PS4/Vita versions?

As Travis said in his review of the original Lichtspeer, the game is super weird; I find it hard to put the story in words that aren’t a smorgasbord of Germanic lore and unusual creatures. You control the Lichtspeer, a… spear of light, and you are tasked with entertaining the gods as you fight (and die) for their amusement. Thirteen levels (broken up into five stages each) of fun and adventure await you as you continue your trek across multiple locales, spearing enemies indiscriminately.

They really aren’t beating around the bush with this.

The controls are simple to understand, but a little difficult to master. You control your character with the analog stick and hold a button to ready your Lichtspeer. Depending on how long you hold it, you can throw it through different distances, spearing hordes of enemies that want to disembody you. If an enemy gets past you, you die immediately and have to start from the beginning of the stage. During levels, you’ll collect Lichtspeer Standard Denominations (otherwise known as LSD), which you can use to buy powerups that can assist your efforts, from upgrading a multi-spear move to casting a shield in order to block attacks.

This isn’t a cakewalk, however, as enemies will take every advantage to murder you brutally. Everything from lumbering zombies to giants to penguins that hurl spears back at you is here, and ready to fight. If you’re not prepared, you can easily get overwhelmed.Missing three throws (i.e. not killing anything in a throw or hitting armor) in quick succession will result in one of the gods shouting “NEIN!” and disabling your throwing action, causing you to be vulnerable for dismemberment. It’s this frantic balance that’s entertaining, challenging, and, for the most part, fun. The problems from the original remain, as regular waves can get repetitive, and the soundtrack is a bit of a generic electronic droll. These issues are still present, and they might be off-putting for some.

Up the ramps we go, all the way!

To break away from the monotony, there are a few achievements you can earn in each level. While the bronze achievement is automatically earned after beating the level, you’ll get silver and gold ones for doing harder tasks, such as getting enough headshots and not getting killed by a certain attack. These small goals increase the replayability of the title, and with scores enabled (which are based on accuracy and headshot multipliers), this game has a great arcade feel to it. The presentation is also pretty slick, sporting a minimalistic style combined with copious amounts of gore. Think The Walking Dead mixed with Snipperclips, and you’ve got yourself Lichtspeer.

While I do agree with Travis that the boss battles are a nice break from the waves of enemies that will kill you, I’m a bit dismayed that the Switch’s control scheme causes them to be more frustrating than usual. These behemoths are lumbering monsters that you’ll have to dispatch, and all require precision and speed in order to kill. They’re pretty innovative, from an eye that will laser you to death to a sea serpent that will lunge in and eat you (or mini dragons that will pick at your flesh should you ignore them).

However, they’re all unforgiving, and missing just one spear throw could mean you go back to the start of the battle. The aforementioned serpent boss was one of the worst offenders, and it was utterly frustrating to get to the last sliver of life. They’re a breath of fresh air that breaks the waves of baddies, but they’re slightly on the imbalanced side of difficulty in an already challenging game. (If you’re still looking for another challenge, this version of the game also includes a harder “rage quit” mode, which is exactly what it sounds like.)

An improvement from the original release is the save system, which provides a checkpoint at the end of each stage. If you’d like to take a break from the spearing, you can quit the game and resume whenever (though due to the portable nature of the Switch, it’s much easier to just put the console into sleep mode and pick up where you left off). This makes portability a big positive for this version, and is recommended if you want to show a friend how weird this game really is.

Related to this is the addition of 2-player co-op; using just the Joy-Cons included on the Switch, a friend can play as your trusty dog, who will be able to help throw spears with you. While the gameplay does get more hectic because of this (enemy appearance scales accordingly, and there are some enemies only one player can destroy), it’s a nice addition for those thinking of repurchasing the game. This also makes Lichtspeer Double Speer Edition more of a party experience, since you can now have a couple of people screaming at each other because they didn’t hit the right target correctly.

Lichtspeer: Double Speer Edition is a great enhanced port of the original game. While it does have a few more issues than its other counterpart, the additions of co-op and updated save mechanics make this an easy recommendation if you want a cheap indie title to play with friends.

Elisha Deogracias is an aspiring accountant by day, freelance writer by night. Before writing for Gaming Trend, he had a small gig on the now defunct Examiner. When not being a third wheel with his best friends on dates or yearning for some closure on Pushing Daisies, he's busy catching up on shonen manga and wacky rhythm games. Mains R.O.B. in Smash. Still doesn't know if he's a kid or a squid.
Related Articles: Indies, Lichtspeer: Double Speer Edition
Share
Tweet
Share
Submit