What would you do if someone you loved ran away? Would you just let them go and wait for them to come back on their own if they wanted? Or would you search for them in the hopes of bringing them back? Any parent would likely opt for the latter, which is exactly what Daniel does in Someday You’ll Return. Someday You’ll Return is an intriguing journey of what a parent will do for their child and how much the past can affect you if you let it. Mix in plenty of self-reflection and mysterious happenings, and you’ve got a good psychological horror game.

As previously mentioned, you play as Daniel, a father whose daughter, Stela, has ran away again. She left school early and apparently ran off to the woods. Daniel is furious and worried about her, while phone calls from her mother, Ida, show that she begins freaking out as well. Instead of calling the police, Daniel decides to follow her phone’s GPS in order to find her himself. For some unknown reason, he is hesitant to enter the woods at first, but he knows it’s the only way to bring Stela home. There’s clearly some mysterious and potentially dark past involving these woods, but we’re left in the dark as to what or why. You must push forward and search for Stela. 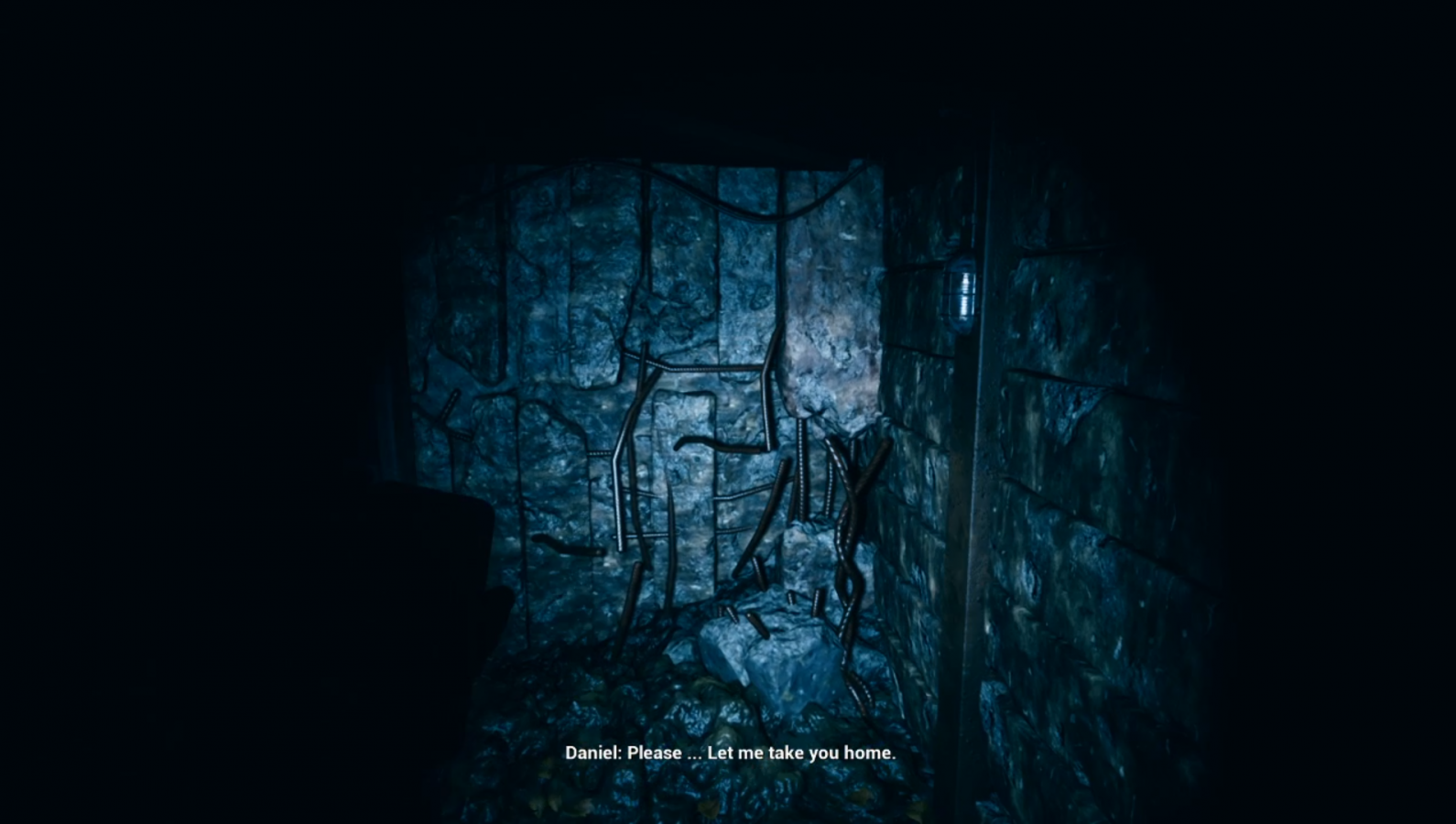 The gameplay primarily revolves around walking through the woods and heading to specified locations. There are times when you have your phone’s GPS available to use, but other times you must rely on the color coded markings and trails that have been set up. Throughout the various locations, you’ll also have to do some climbing, solve puzzles, and do some crafting. The climbing is interesting because it’s almost like a puzzle itself. You manually control your hands as you reach towards rocks and grab them. Most rocks are smaller and only have enough room for one hand at a time, while larger rocks allow you to place both at once. Since your arms can only reach so far, you have to carefully think about which hand you grab certain rocks with. There are times when you need to swap hands while grasping a larger rock in order to make it through. Not only that, but there may be multiple paths to choose from, but only one actually lets you reach your goal. It’s not a big mechanic, but I appreciate its inclusion nonetheless.

The game’s puzzles are average in terms of difficulty for the most part, as long as you’re paying attention to your surroundings and reading documents that you pick up. If you ever seem lost on a puzzle, be sure to check the nearby areas in case you missed an item or piece of information. I had this happen a few times, but that’s on me for missing some stuff that I walked right past. At the same time, there are some areas, both puzzle related and not, that aren’t obvious about what to do right away. It doesn’t happen often enough to be a real problem, but it’s worth mentioning that I spent a bit longer than I’m proud to admit on some parts. Some puzzles actually require you to find necessary items that are used to craft something more useful. I’d give examples, but that would spoil some of the puzzles and plot points. The most I’ll say is during one puzzle, remember what to do when life gives you lemons. 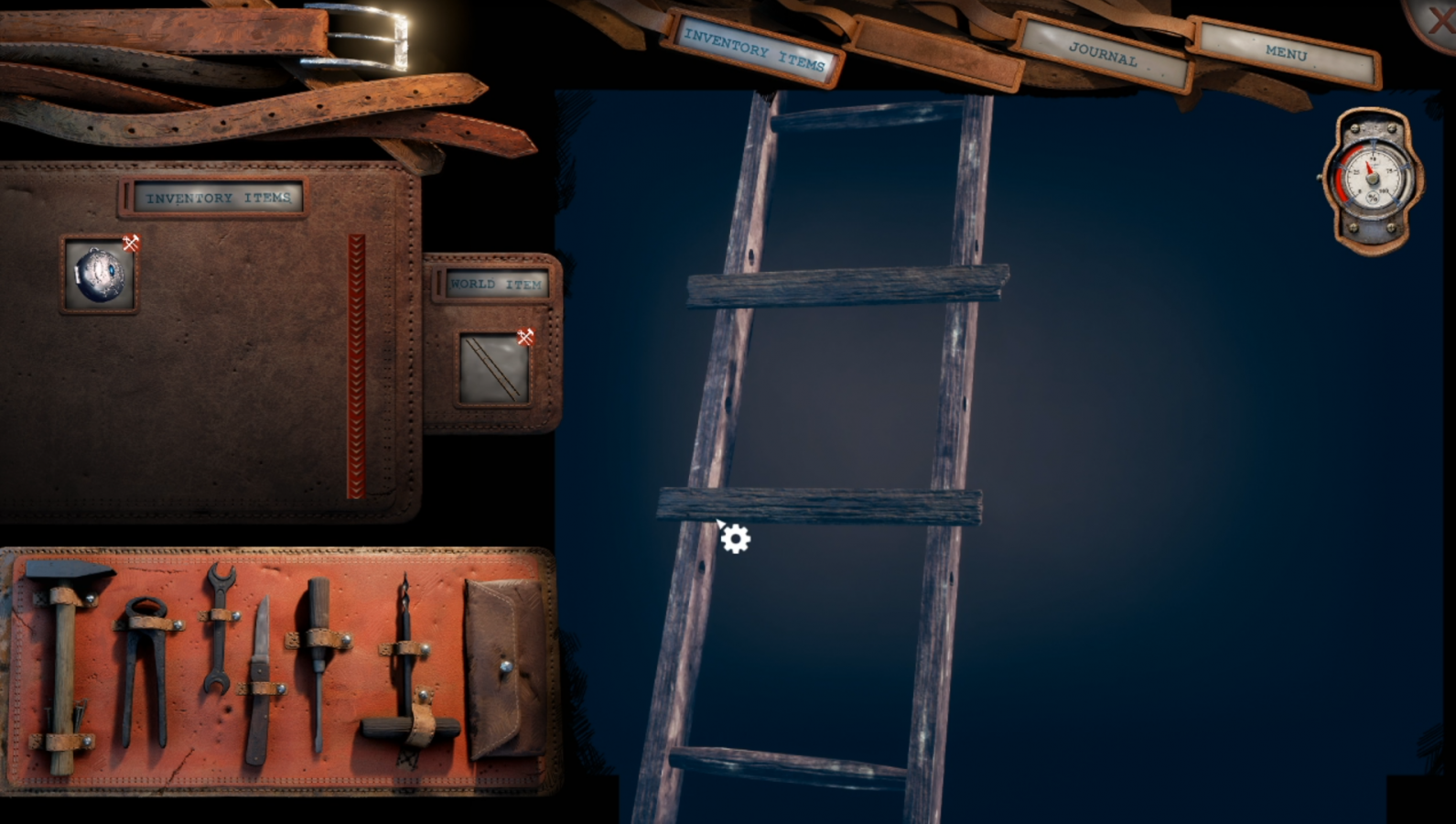 One other mechanic similar to crafting is herbalism. I want to say that I really liked this idea, but was disappointed how little it actually came into play. At a certain point in the game, you gain access to a herbalism kit and accompanying booklet. These allow you to collect various herbs from around the world and store them in the kit. By going to the herbalism menu, you can view any potion recipes that you’ve acquired, along with detailed instructions on how to create them. You can toss the herbs in whole, chop them up into petals, leaves, and roots, or even crush each of the aforementioned pieces into powder. You must follow the recipes exactly or else they won’t work. If you need a crushed silverweed root, you better crush only the root and toss it in. If you need a whole devil’s trumpet herb, don’t split it into pieces. The kit can only hold two of each variation of each herb. That means you can hold two whole herbs, petals, leaves, roots, crushed petals, crushed leaves, and crushed roots of each type of herb. Take advantage of that and keep yourself stocked up as much as possible in order to avoid having to go out of your way to search for herbs later. The flower scent potion is a one-time use potion that permanently allows you to sense the locations of herbs after pressing the Q key. It’s very helpful if you’re looking for herbs. 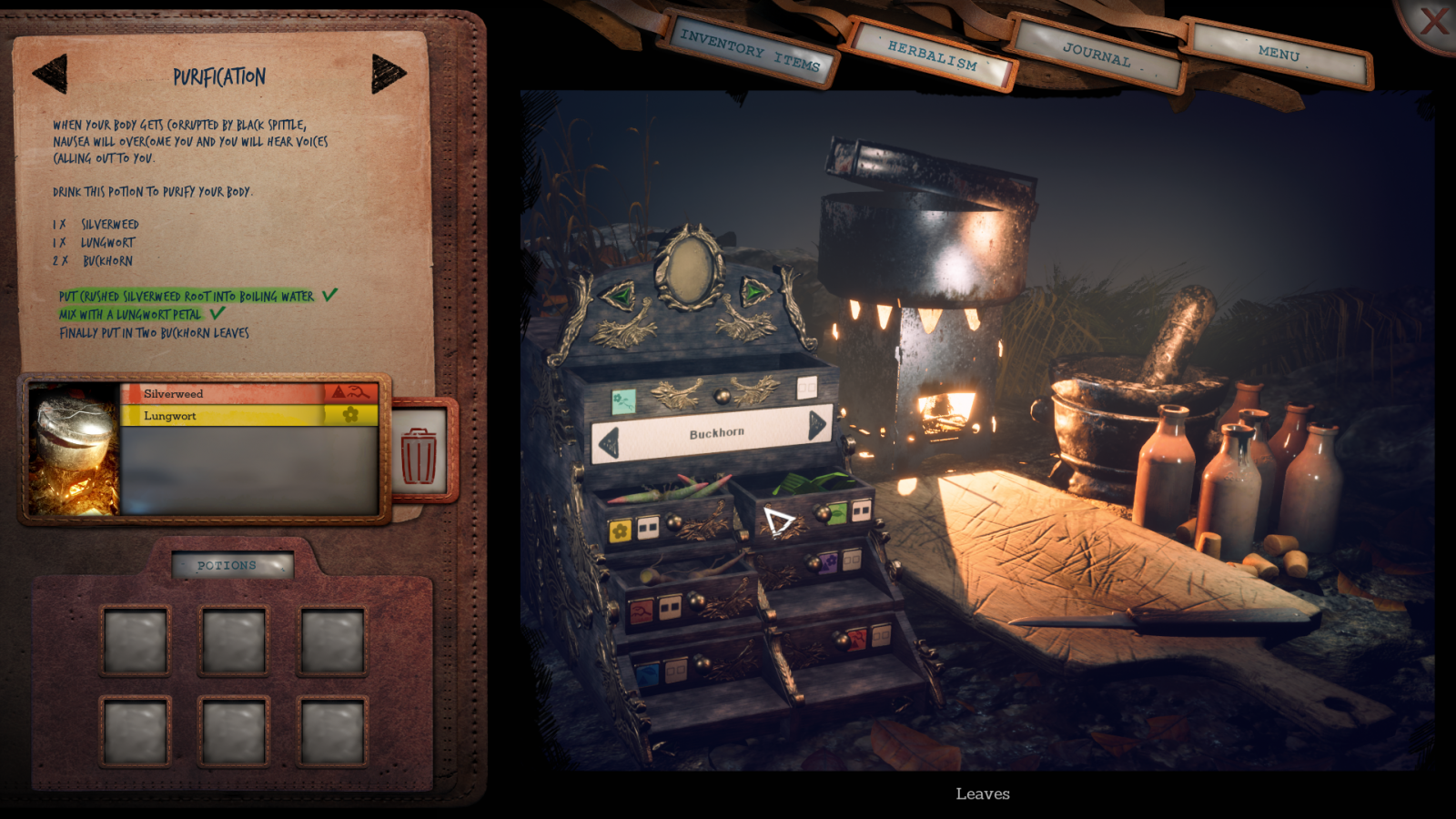 I won’t lie, it’s hard to talk about the story without spoiling things, so I’ll be as vague as possible. Someday You’ll Return starts off by only having you wondering about where Stela is, why she ran away, and how the story will end. As you venture further into the woods and progress through the story, you’ll start thinking about a lot more. Learning more about the family’s circumstances and past, along with the increasingly creepy and mysterious events occurring around Daniel, will undoubtedly get your gears turning. As Daniel starts to experience more hallucinations and disturbing situations, you too will begin to question what’s real and what isn’t. Not everything may turn out to be what it seems, but the line between real and imaginary becomes blurred beyond belief. As a spoiler-free taste, you’ll encounter characters such as Eleanor, Lea, The Beast, a swamp girl, and an old woman. There aren’t a lot of other characters in this game, but the ones who do appear are really interesting. One complaint I do have in terms of characters is Daniel’s voice acting. He tends to sound a bit off, almost as if he wasn’t naturally speaking. His jerk attitude and abrasiveness don’t translate well either, making you wish that he either didn’t speak as much or at least sounded differently. 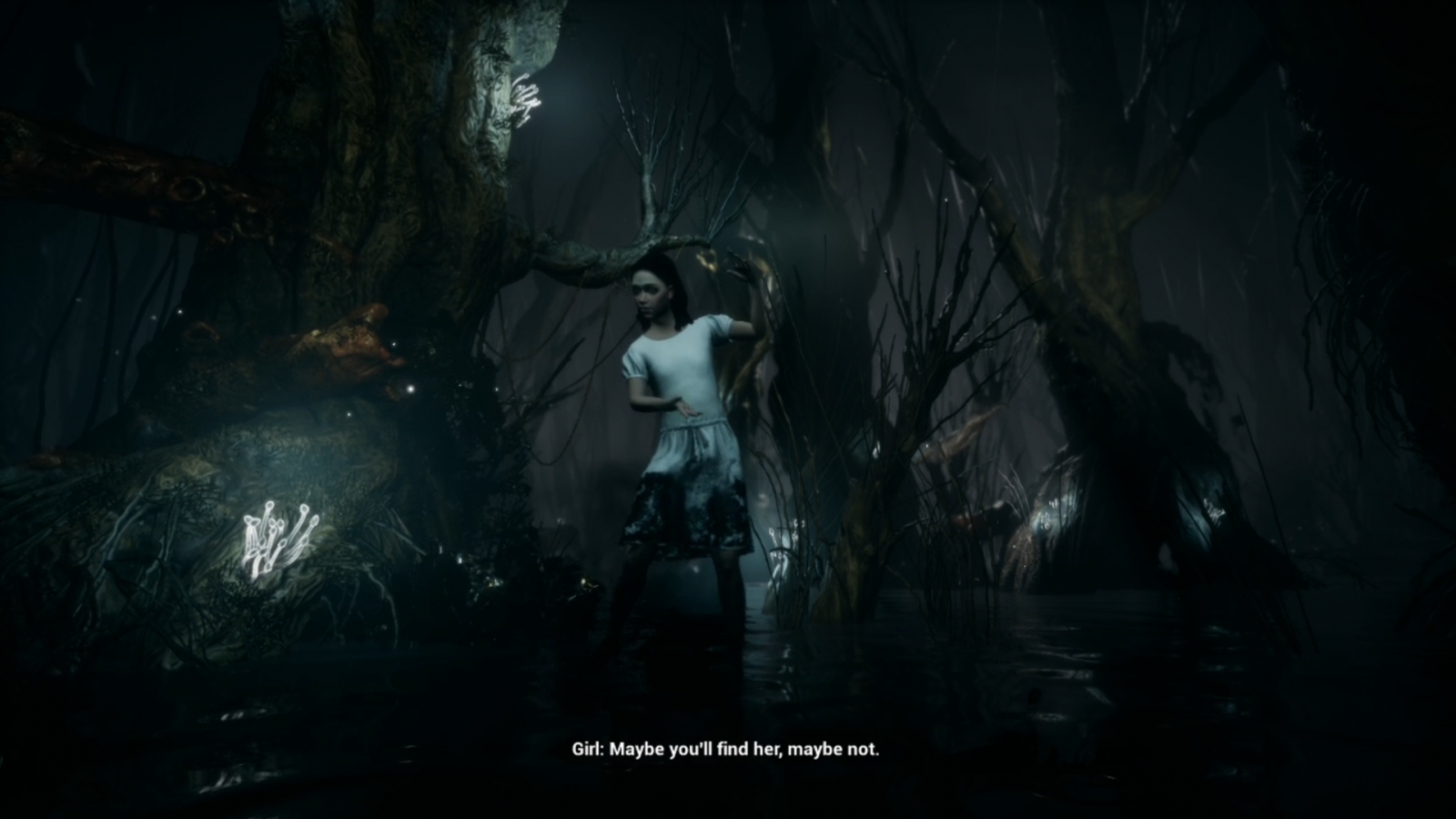 Overall, Someday You’ll Return is a pretty good psychological horror game. It starts off calm and relaxing, but soon becomes unsettling and thought-provoking. You start to think like Daniel, which may or may not be a good thing considering his hallucinations. Or are they hallucinations? It’s hard to tell anymore….how long have I been here? Regardless, even though some mechanics aren’t used as much as I’d like, this game has plenty to offer. If some of the mechanics such as herbalism were expanded upon more, then the game would be even better. It helps set the game apart from other horror games, which is always appreciated. Someday You’ll Return was a trek through the woods that, as trippy as it was, was well worth the time and energy.

Someday You'll Return is a psychological horror game about a father searching for his daughter in the woods. Various mechanics such as manual climbing, puzzle solving, crafting, and herbalism all keep gameplay fresh and engaging. Herbalism isn't used as much as it could've been, which is a shame since it's pretty neat. Through it all, you'll start to question your own sanity.

Codi loves to play video games and watch movies. He will watch almost any kind of movie just to experience them. His ideas take inspiration from the shows and movies he watches, and games he plays. He also loves a good pun.
Related Articles: Someday You'll Return
Share
Tweet
Share
Submit