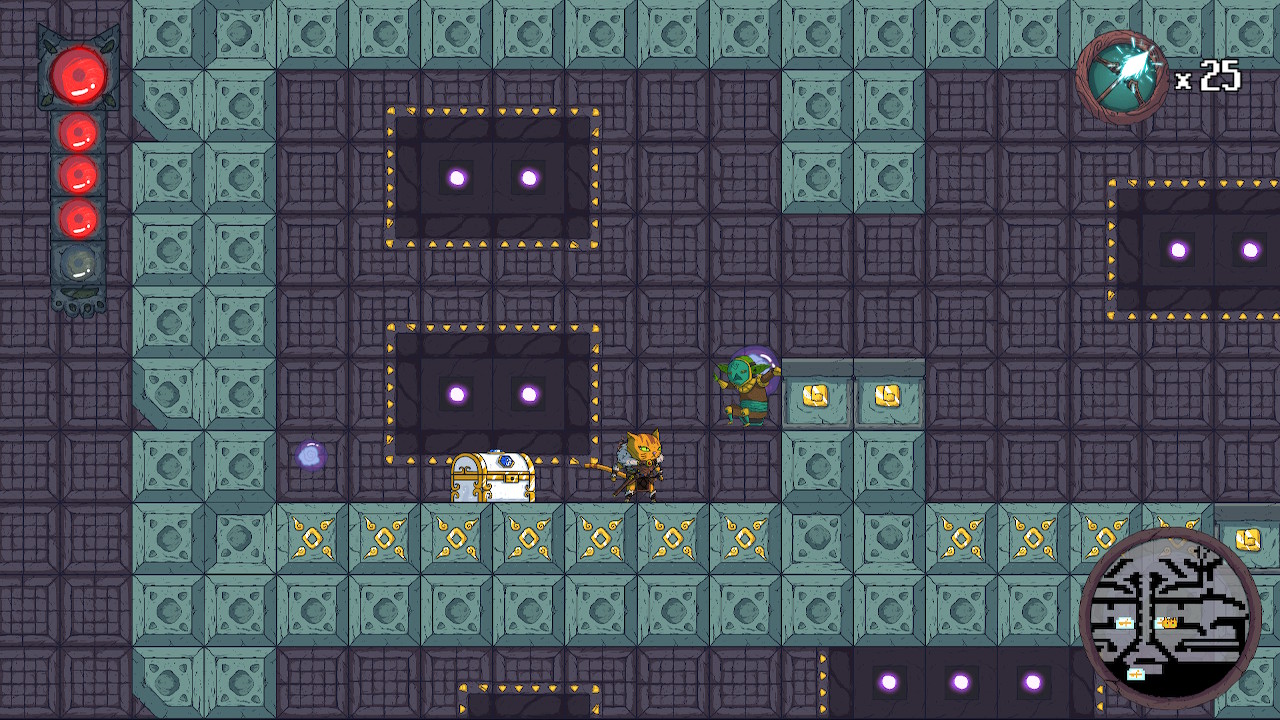 In 2016, one of our editors took a look at a small indie game developed by a handful of people at Lienzo. This title, called Hunter’s Legacy, is a 2D platformer metroidvania where you play as Ikki, a kitty with swords and a bow, as you explore a decent sized world while learning new moves and upgrading your swords and bow by spending gems and precious Ore. Editor Sarah Marchant’s review lamented about the game’s inconsistent difficulty spikes, irksome sound effects, and minimal story. With the Purrfect Edition being released on Switch, Lienzo had the perfect chance to fix these issues, but did they succeed?

Hunter’s Legacy: Purrfect Edition adds a few tweaks to the overall game. One of these changes are new animations for several characters, but these changes appear to be more subtle. However, the levels themselves are lacking in variety. Their design has been modified to be more fluid, but the inconsistent difficulty spikes are still present, with one notable exception being a window area with corridors of spikes as you’re trying to travel upwards via a leaf.

The sounds haven’t appeared to be changed much as well. The grunts made by Ikki become tiresome, lacking in variety as you mash attacks at every enemy in existence, but the background music is still soothing to go along with the environment. On the other hand, combat has definitely been improved. Enemies are more reactive to hits, and they no longer poof out of existent when killed. This makes combat more satisfying, but almost every boss of the game can be taken down by sneaking up on them and mashing the attack button.

One welcome addition that improved the game dramatically is the inclusion of a mini-map. This map, held at the bottom-right corner of your screen, displays any chests in the nearby area, which allowed me to plan out my moves more easily or determine if I even had the right move-set to reach the chest. This also helped prevent me from ever feeling like I was lost. While certain parts of the world may seem too similar to other sections, I was able to map out where exactly I came from more easily and find my way out of the maze.

The original game did feature several stutters when it came to its framerate. While playing through the Nintendo Switch version of the game, I haven’t come across many of these issues. The whole thing appeared to run just fine, even with explosions impeding my progress as I navigated through tight corridors. I primarily played the game in  handheld mode with a few of the segments docked and both ran comparably.

Lastly, the game is advertised to have a “New Game Plus” mode upon completion of the main story. After a grueling final boss fight (which was the only boss that seemed to put up a challenge), I finally had the chance to experience this mode. However, instead of carrying over anything you had from your original run, the game instead gives you every possible upgrade to face against tougher enemies. Any difficulty that might have been added for the first half of the game is nullified by the fact that you’re a murder-beast out of the gate. I was expecting a little more from this mode, but it is a fun alternative to anyone that doesn’t want to grind for Ore.

While far from “purrfect,” Hunter’s Legacy: Purrfect Edition isn’t a bad game. It’s a game that has a lot of potential with interesting character designs (or I could just be a sucker for cat protagonists), responsive bow mechanics, and melee mechanics. There’s something good here, but it may require Ikki to take another stab (or twenty) at her world before her full potential is realized. But at its price point of $6.99, while it may not be the longest game (I finished it with nearly all of the ore in around 5 hours), it may be worth checking out.

Hunter’s Legacy: Purrfect Edition fixes several of the issues the original game had by adding a much-needed minimap and making enemies more reactive to your attacks. However, the sound design on Ikki herself is still irksome and the game is a far cry from what it could be. I’d love to see what Lienzo does with Ikki in the future, but for now, Hunter’s Legacy: Purrfect Edition is just OK.

Sean Anthony likes to combine two of his passions: gaming and writing. Gaming has been a huge part of his life ever since he played his first game as a child, Kirby's Adventure. He aspires to have his name attached to an article that makes the whole world go, "Huh, that's neat, I guess."
Related Articles: Hunter's Legacy: Purrfect Edition
Share
Tweet
Share
Submit