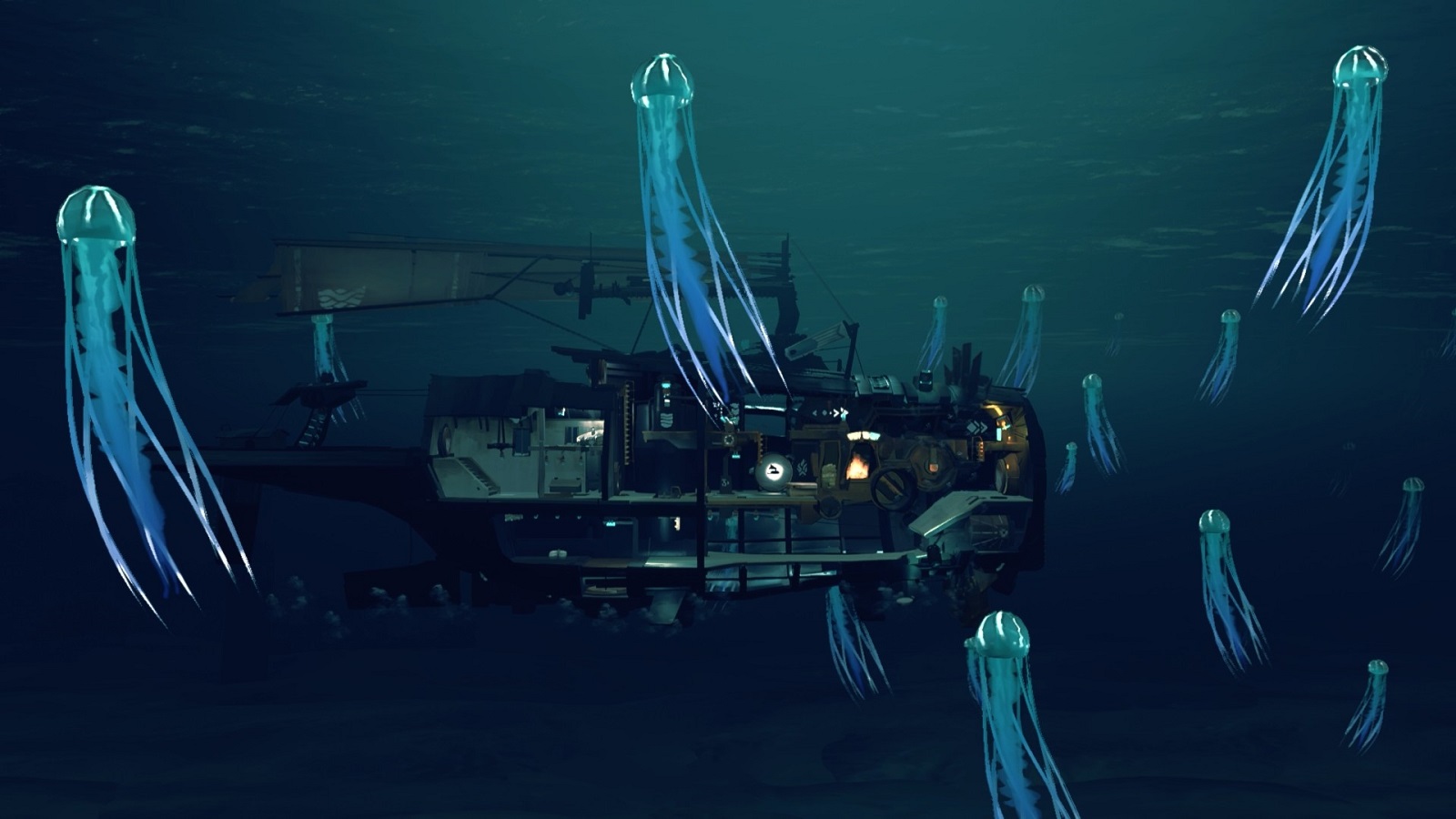 The sequel to FAR: Lone Sails scours off the rust and polishes the rest to an acceptable shine; it’s a well-oiled machine that runs for twice as long, with a lot more adventure hiding under its hood to compensate for the series’ shortcomings. While the influences are obvious — the original graduated in the same class as other spooky, solemn sidescrollers like Inside and Little Nightmares — the FAR series makes the effort to set itself apart by pairing players with a vehicle companion in what developer Okomotive calls a “vehicle adventure.” Toe, the young protagonist, is the captain of his own steampunk-style ship, but he’s also the engineer, deckhand, and every role in between.

You and Toe have a seven-hour journey ahead, one meticulously plotted out from the first to final mile. The exposed skeletons of decaying structures find new purpose as stunning vistas greeting you at every checkpoint. There’s beauty to be found everywhere in Changing Tides despite the less-than-stellar state of the world. Your new ship is fitted with a few more bells and whistles than Lone Sails’, putting more biomes in your reach as well. In tune with the visuals, the music swells and subsides to match the emotional cadence of the experience. Changing Tides puts its best leg forward across art and sound to hit those recognizable beats you remember from its inspirations and contemporaries. 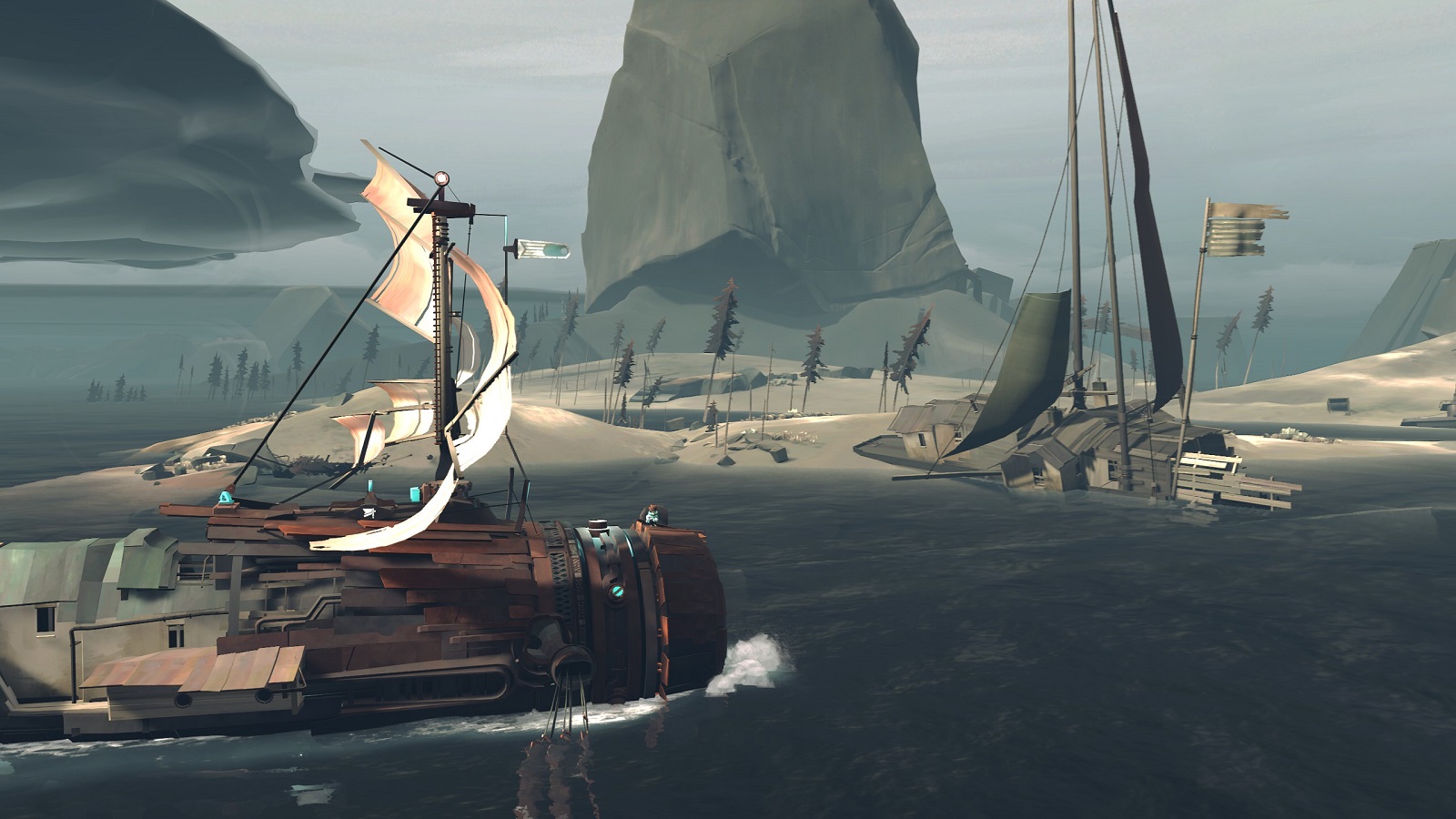 The start of a new adventure.

The joy of exploration comes from more than just the many set pieces you come across on your journey; much of it stems from the intimate, symbiotic relationship between a boy and his machine, explored through the game’s mechanics. There’s more to see this time around, but also more to do. What I appreciate most is that Changing Tides finds a better balance between busywork and meaningful interaction. In Lone Sails, I was too occupied toiling in the ship’s bowels to pay attention to the sights that were passing me by outside. Now, I have all the time in the world — too much, perhaps.

A chunk of Changing Tides’ lengthier completion time is dedicated to just vibing; lengthy stretches of silence where you ride the wind across oceans and past landmarks are commonplace. It’s a meditative journey, and a welcome one at that, though some awkward pacing sours the experience. Points of interest are spread out just far enough for you to steal a few quick glances at the clock. The first leg of your ship’s maiden voyage is an especially slow slog to obstacles that couldn’t come soon enough. It becomes painfully obvious that the scenery can’t carry the experience by itself.

As more mechanics introduced themselves, and more context was established, Changing Tides settled into a comfortable pace. Correcting the sails and feeding the furnace is its own brand of cozy fun, but throw in some outdoor escapades for fuel or puzzles and now you have a worthwhile formula. Every little action you take contributes something to the well-being of you and your ship. Hopping out to unlock a giant door is a big task with a big prize at the end, but optimizing your mini fuel reserves for a faster refuel is just as rewarding. The process repeats over the course of several hours before pulling levers and hitting buttons is just muscle memory at work. 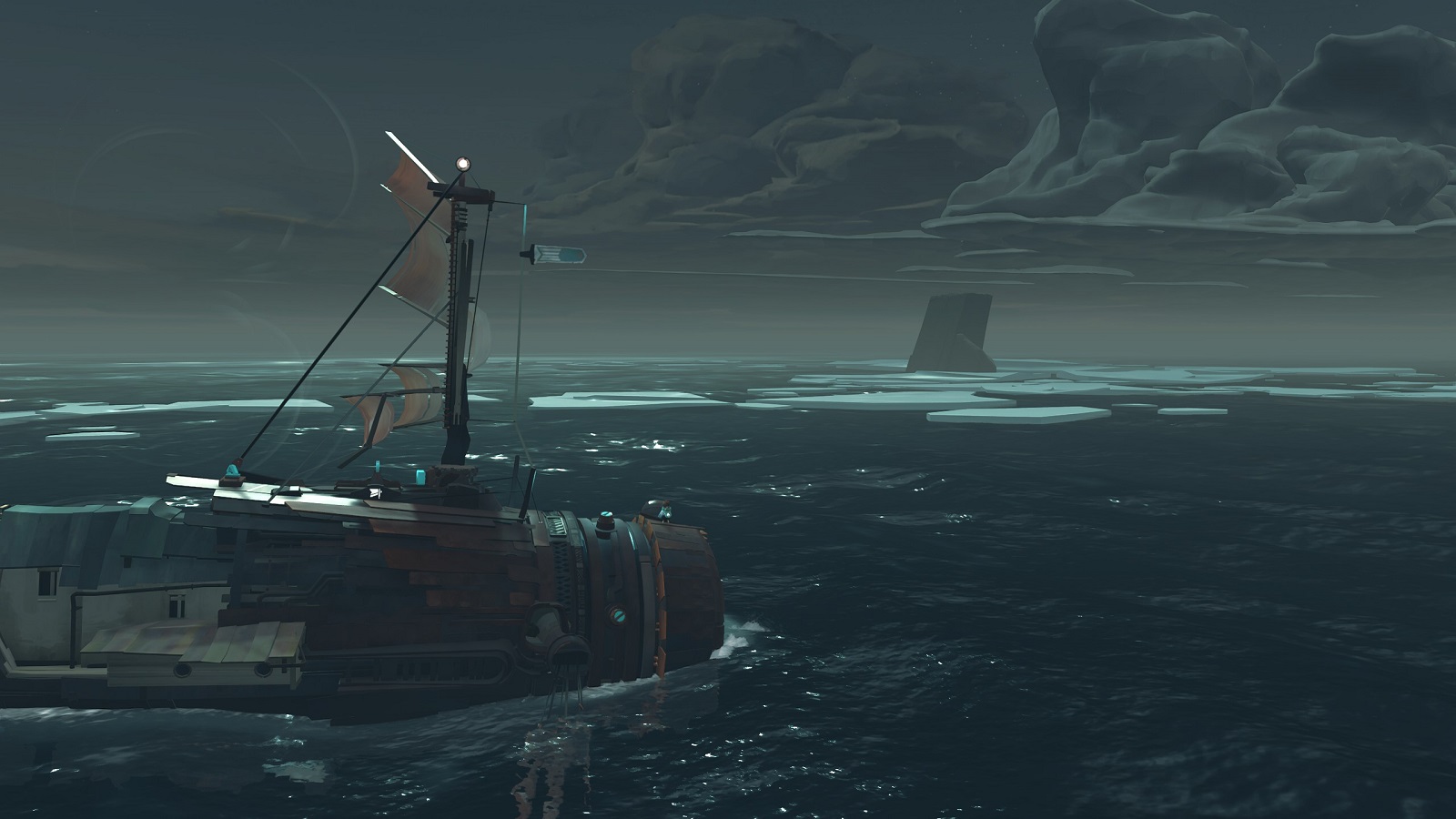 Monotony is Changing Tides’ biggest threat, and a significant portion of the experience comes uncomfortably close to it. For most of the journey, you meet very little resistance to keep you awake and alert. When things take a turn for the worst, the game is at its best. Traversing storms is an easy highlight for me — moments when the most interesting ideas and mechanics find suitable contexts to set my emotions on fire. While the wind, rain, and lightning pummeled the ship, I was on the inside cranking up the furnace, hosing down the engine, and tripping over fuel. I might even need to make a dangerous trip outside to fix up the sails. It’s during these times of crisis that you can reflect on your relationship with your ship and the world outside its walls. And it’s because of similar bumps in the road that I could appreciate the calm. I wish Changing Tides was more of a mechanical and emotional rollercoaster in that regard. There’s too much downtime, and much of it is unearned.

The ship is your best friend, and best friends help each other solve puzzles. Like in Lone Sails, your route is punctuated by obstacles that can only be handled on foot. Unlike the bulk of Lone Sails, most obstacles can’t be overcome with just Toe alone. You might have to raise the main mast and use the crow’s nest to reach a platform higher up. Other times, guiding a hook to an underwater obstacle and reeling it up with the ship might be the key. Changing Tides never lets you forget about your ship even when you’re forced to abandon it to handle business elsewhere. 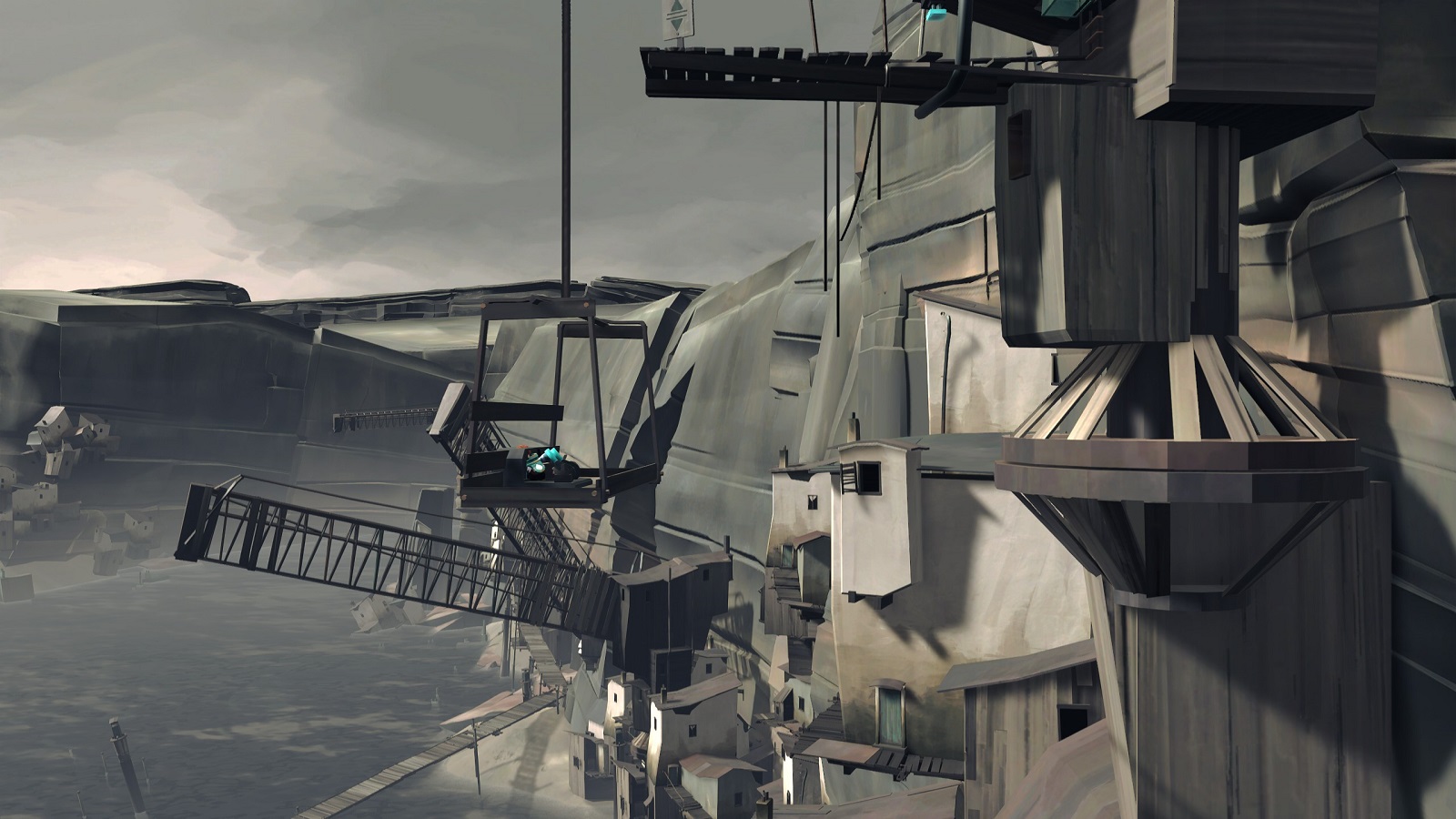 Every now and again some unclear communication turned simple puzzles into half-hour lulls. The answer is obvious most times — clear a path for your ship; though sometimes it asks for a little more. Puzzles in Changing Tides are on the lighter side of the problem-solving spectrum, yet the odd design hiccup makes it easy to misinterpret puzzles. The lack of formal UI and emphasis on self-driven discovery do a lot for the game’s brand of atmosphere, but makes puzzling a pain at times. Games in a similar vein like Inside strike a better balance with clearer affordances.

And that’s the biggest issue: too many gameplay beats and ideas feel eerily familiar. The vehicle adventure is a great concept with solid execution behind it, though those standout moments are separated by stretches of seemingly empty space that don’t do enough to prime the player for the more interesting ideas to come. Maybe it’s the overexposure to this particular style of game over the past decade, but I think I’ve had my fill. It’s an impressive leap forward from Lone Sails, but Okomotive has yet to reach its full potential.

The sequel to FAR: Lone Sails scours off the rust and polishes the rest to an acceptable shine. It’s a well-oiled machine that runs for twice as long, with a lot more adventure hiding under its hood to compensate for the series’ shortcomings.

A self-deprecating, overly sarcastic pair of glasses that occasionally possesses a human host in order to partake in the delightful process of playing video games, then immediately complaining about them. When he is not playing games (a rare occurrence), he can be found either writing about things that no one cares about, or haunting the quiet streets of his Canadian suburb.
Related Articles: FAR: Changing Tides, Indies
Share
Tweet
Share
Submit