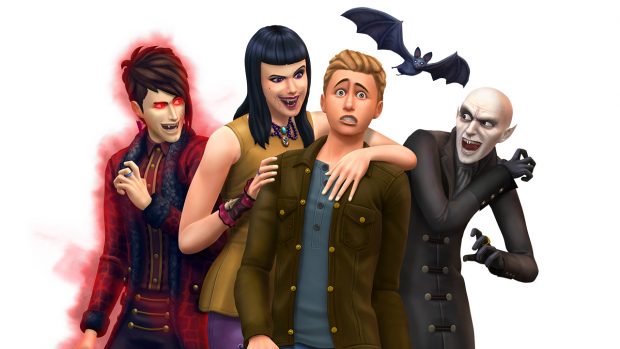 The Sims 4 is notorious for zany, outlandish, and wild gameplay and the newest game pack, Vampires, intelligently adds to it. It also introduces new ideas, gameplay elements and great new interaction options. All in all, it’s a unique little game pack, though it left me wanting more.

As the titles suggests, Vampires adds the ability to create, or turn, your sim into a night crawling immortal. The character creation for vampires is chock-full of new items and looks, allowing you to create a new vampire in a fun and in-depth way. There are options for new skin tones, eye socket choices, even fangs, and I was thoroughly impressed by the new Create A Sim options. Due to the versatility of the system,you can create a stereotypical vampire with fangs, complete with deadish skin tone and a creepy slow gait, or make a normal Sim who still has the vampire abilities and traits. This is a great way to further the ability to make and create a vampire with the story you want to tell. Vampires comes with the gambit of not being able to stay in the sunlight or stand garlic, although they can use mirrors. That aspect is not a big deal but ir would’ve been a nice little feature to see it changed around.

Among the new features in this expansion was one that I really hope will stick in the future. In The Sims 4 Vampires you have an ability tree, like in a lot of RPG games, that allows you to pick and choose your powers and weaknesses. As you progress and level up your vampire rank, new tiers of both powers and weaknesses unlock. There are plenty to choose from and I had a great time picking and truly tailoring my Sims abilities as I saw fit. This was surprising and a joy to play around with. I was able to make my character move around as a bat, turn other Sims into vampires, even giving them the ability to control other Sims and make them do what I wanted. The weaknesses you can choose also give a sense of storytelling and progress, like making your vampire unable to eat human food, or only able to sleep in a coffin, although you do not have to choose weaknesses either. After playing around and unlocking skills it became a system I thoroughly enjoyed and hope to see more of in the future.

Interacting with the world and other Sims is a big part of the base game, and Vampires pushes that even further in great ways. Vampires are able to to brag about being a vampire, share their knowledge, and scare regular Sims, but as you unlock skills you are able to do more things that are both fun and entertaining. You can control Sims’ minds to do things like be mean to each other and force them to workout. You can also drink their plasma and even turn them into vampires. Where it really shines though is interacting with other vampires. Other vampires can train and spar with you, and you can learn about their past lives. Doing these things will help level up your vampire abilities.

The Sims 4 Vampires also comes with new build and world items, although they are a little on the sparse side. The ability to buy coffins or an organ were great additions, but I wish more of the items were related to a gothic or victorian theme. There is some new furniture and decorations, including walls with cobwebs, but overall there are  just not enough build items compared to other expansions. As with the build items, the world also has new things such as drinks you can make that will allow you to stay in sunlight longer, or even cure your vampirism. There are also plasma fruits which allow you to make your own plasma packs, so you don’t have to drink them from a living Sim, and other ingredients. It’s enough to push the gameplay forward, but I wish there was more to sweeten the deal.

Vampires also comes with a new town to live in but, as with the items, it just wasn’t enough. It is a paradise for vampires as the nights are longer than days, which helps because sunlight can hurt or even kill your Sim, but with only 5 lots, it’s small and doesn’t have much going on. If you want to go to stores or clubs you must leave the town and I feel a lot more could’ve been added to the world, or at least more lots to add these things yourself. I like the look and the feel of the new town, but it is just too small and empty to hold my attention. I loved where EA went with this game pack but personally I wish it would’ve added an expansive town, more items, and expanded on the abilities section and made this a full on expansion, like the Supernatural expansion of older Sims games.

My biggest gripe is there is not more, and I wish this was a full-fledged expansion because I enjoyed it so much. The new abilities tree is a fantastic addition to the SIms and I loved playing as a vampire, making this my favorite game pack The Sims 4 has put out to date.

Growing up in a small Colorado town, Bryan has always had plenty of time to play games. PC is his first choice of tech followed by the PS4. Graduating at 16 Bryan knew he wanted to be a writer and wanted to combine his love of games into that and found Gaming Trend in 2012 where he quickly became a member and started writing for them as soon as he could. He is still at Gaming Trend, but now has 2 kids, a puppy, and a lot less time to play the games he loves, but he always finds a way to get back into gaming.
Related Articles: The Sims 4: Vampires Game Pack
Share
Tweet
Share
Submit