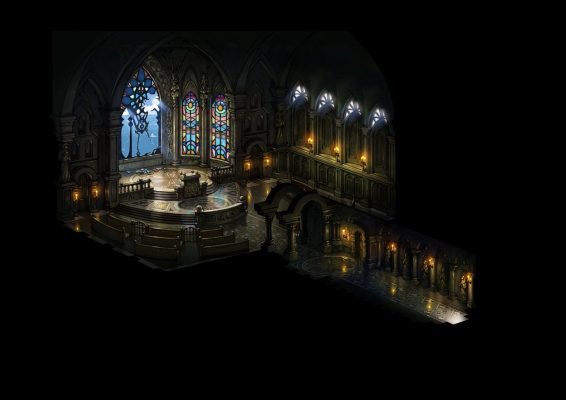 Bravely Default awoke something in me that had been lying dormant — my love of JRPGs. While Bravely Second: End Layer doesn’t quite live up to the lofty heights of its predecessor, it is every bit what you would expect from an old-school RPG. Welcome back Square Enix — we missed you.

Bravely Second opens two and a half years after the conclusion of Bravely Default. Returning to the world of Luxendarc, new protagonist Yew Geneolgia, Janne Angard, and Nikolai Nikolanikov rush to save the freshly-kidnapped Agnés Oblige. Empire crony Kaiser Oblivion and his sidekick have taken her to his flying castle in the sky, and you must rescue her. Okay, so the game isn’t winning any points for originality with the setup.

Spread across six chapters, Bravely Second: End Layer has some serious length. The main story took me just over 40 hours to complete, but I invested easily another 20 running around and discovering all of the hidden goodies Bravely Second has to offer. But for those of you who completed Bravely Default, you know that much of the first title’s content revolved around the repetition of a specific event. While there is a sense of déjà vu at times, I’m very happy to report that the team recognized this issue and there is only one instance of that sort of “groundhog day” in Bravely Second. The plot can be hokey, trope-stuffed, or downright obtuse, but the second half of the game brings it all together, making for one of the better story arcs I’ve played in a while. I will offer this bit of caution, however — play the first one. First off, it’s a fantastic game despite some wobbles, but there are a lot of moments in Bravely Second made richer having completed the first.

Some of my favorite parts of Bravely Second are the moments that use puns or tongue-in-cheek humor amidst an otherwise serious topic. As an example, Magnolia Arch is the last of her kind — a “Ba’al Buster” from (and I’m not kidding) the moon. Even “Mrgrgr” makes a comeback. There are, unfortunately, points in the story where the game goes decidedly meta. I won’t spoil them, but those moments feel forced, and instead of extending the immersion of the game, actually broke it pretty soundly. Thankfully, these moments are highly infrequent.

From a content perspective, Square Enix does reuse some content from Bravely Default, but unless you really dig your spurs in and explore every corner, you might not know it. A few optional side dungeons from the first title make an appearance here, but much of the content is new. There are returning characters and towns from the game’s predecessor, but it feels less like recycling and more like catching up with old friends.

The team put incredible work into the background art.

While content is certainly important, the strength of a JRPG is in its combat. Bravely Second doesn’t break much new ground over what Bravely Default brought to the table. You’ll still economize your turns, saving them up to unleash larger attacks, or spending them in advance for quicker strikes. What is new here are the inclusions of a few more class types (including a Warlock that uses the power of patisserie (read: cake) to debuff foes, as well as the ability to set up a specific configuration and save it. Being able to summon up your own pre-defined archetypes is a massive improvement over the original, making job grinding for completionists like myself that much easier.

There are a total of 30 classes to acquire, and they come from “asterisk holders,” just as they did before. Though many of them are unlocked by defeating bosses in the main storyline, others are tied to optional side quests. These often force you to choose sides between two NPCs, pitting you against the person you did not choose. For me this often meant picking a choice that I didn’t necessarily agree with just so I could snap up whatever job I wanted to combine with my current one. It’s meant to force a moral dilemma. I’m not going to spoil how, but there is a way to retrace your steps, so all 30 are achievable, but the carrot of the class you want versus the story choice you’d normally make makes it feel a little broken.

There are a few little changes that I appreciate in Bravely Second. Dungeons now display a recommended level range in the corner, meaning it won’t be a surprise if you are showing up to the party a little early and your party gets torched. Thankfully, I never felt the need to grind out levels — Bravely Second is well paced.

Jobs are as fun and quirky as ever.

The second change took me a moment to get used to. The bonuses in Bravely Default for completing combat in specific ways (e.g. One Turn, Sweeper) are replaced with a new system called Consecutive Chance. It’s still very possible to wipe out the enemy using all of your Brave Points (BP), but now the game offers up a risk/reward mechanic to extend battle. If you’ve cleared the field in the first round, you can immediately re-engage with another set of foes for a 1.5 multiplier to your Experience, Job Points, and Peeg (aka pg, aka money). Here’s the trick — you start with the BP values you finished that first round. This means, if you’ve spent all of your BP to wipe out your enemies, and you don’t defeat the next set in the first round, they’ll get five uninterrupted turns to kick your party to pieces before you get to answer. The bonuses stack, creating a great risk/reward mechanic. Combine this with the new auto-battle system that allows you to craft and save up to three tactics, and you have a mechanism that lets you speed through the easy spots and focus more on the more challenging ones.

I was sad to hear that Revo wasn’t available to score Bravely Second as the music in Default was superb. That said, ryo of Supercell contributes more than a few solid tracks to combine with some old favorites for a soundtrack that ends up good, if not great. The voice acting in Bravely Second continues to be over the top and melodramatic, but it was the same for its predecessor, so I didn’t expect anything less. And yet, for reasons I cannot begin to fathom, Square Enix decided to change the way Edea pronounces her own name. When you spend over 100 hours with a character, you don’t just up and change the way they pronounce their name. Couple that with a few unexpected audio compression issues and you have to wonder what happened to the sound in the last year and a half since the game was released in Japan.

Combat has improved across the board since Bravely Default

Diametrically opposed to the baffling voice change choice is the update to the artwork in Bravely Second: End Layer. The chibi-style characters return with their fantastic costumes and gigantic hair, and they layer beautifully on the watercolor-style background art that permeates every bit of the game. Luxendarc looks like a painting come to life. The Square Enix team has also put a lot more effort into the dungeons and forests you’ll explore. There are more twisting paths to explore this time around, and the ability to turn off encounters to find all of those special boxes once again lets players scour for every box and hidden gem.

Bravely Second: End Layer has a merely passable story, but the fantastic combat, new job classes, and updated mechanics make it an excellent installment to the series.

Ron Burke is the Editor in Chief for Gaming Trend. Currently living in Fort Worth, Texas, Ron is an old-school gamer who enjoys CRPGs, action/adventure, platformers, music games, and has recently gotten into tabletop gaming. Ron is also a fourth degree black belt, with a Master's rank in Matsumura Seito Shōrin-ryū, Moo Duk Kwan Tang Soo Do, Universal Tang Soo Do Alliance, and International Tang Soo Do Federation. He also holds ranks in several other styles in his search to be a well-rounded fighter. Ron has been married to Gaming Trend Editor, Laura Burke, for 21 years. They have three dogs - Pazuzu (Irish Terrier), Atë, and Calliope (both Australian Kelpie/Pit Bull mixes).
Related Articles: Bravely Second: End Layer
Share
Tweet
Share
Submit