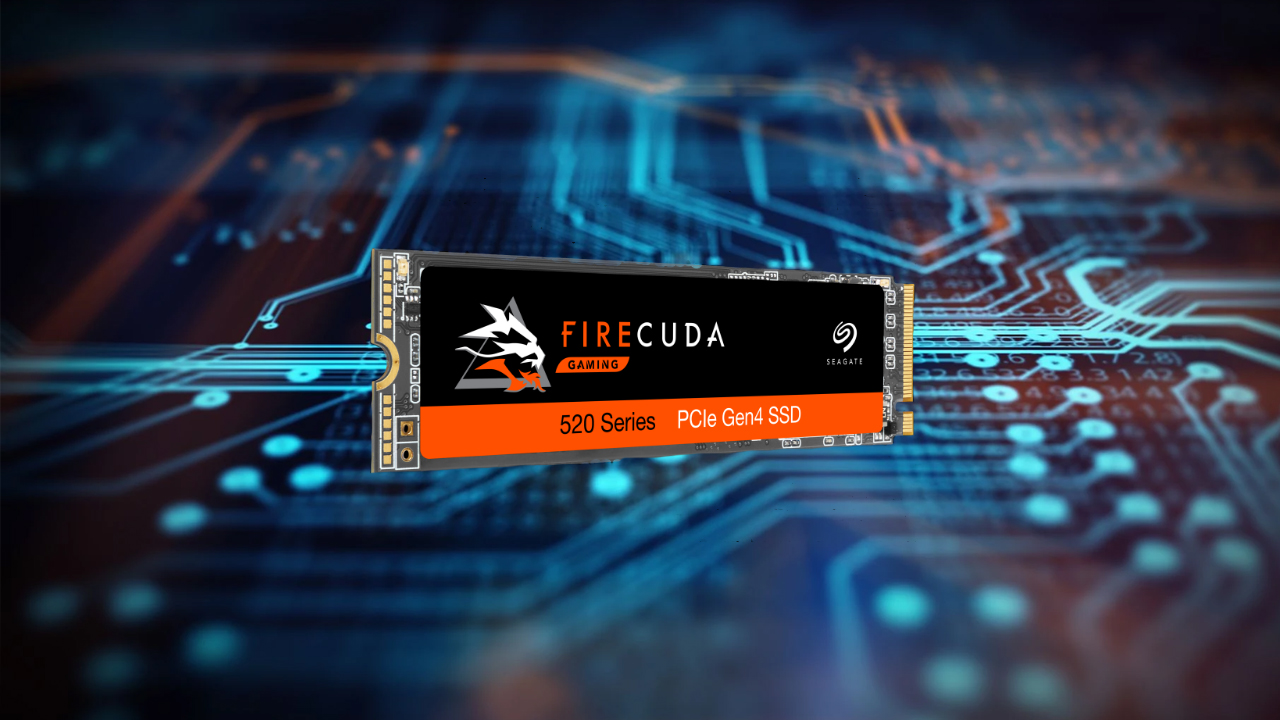 3Mechanical drives are easy to understand – they spin at 5400, 7200, or even 10,000 RPM. Hybrid drives and SSDs are a little tougher to understand as the former still relies on mechanical rotation, and the latter having no moving parts whatsoever. Still, the difference between them is roughly 30 percent, or said a different way, roughly 150-200 MB/s for mechanical drives versus the high end SSDs which can turn in speeds of 500 MB/s. On the other hand, M.2 NVMe drives can deliver speeds far, far faster. But can your system support them? The first NVMe drives were only capable of 1300MB/s for read and 1000MB/s write, which is obviously a huge leap. Seagate has been plugged into this space for a while now, and in June we checked out their Gen 3 NVMe drive, the Seagate FireCuda 510. Now, just six months later we have a generational upgrade. With the 510 delivering 3GB/s for both read and write, just how much faster could this new FireCuda 520 be?

First and foremost, it’s important that you check your specs before you jump on this newest generation of M.2 drives — AMD has the only Gen 4 motherboards as of the time of this review. That said, fret not — a quick test of the 520 on my Intel-based motherboard yielded speeds of 3448 MB/s for read and 3371 MB/s for write, essentially dropping back to Gen 3 speed, with a little extra on top. Still, there is a bit of a price increase between the 510 and 520, so choose accordingly.

Loading the FireCuda 520 into a Ryzen 3700X based system running on an X570 Aorus Ultra motherboard’s M.2 slot, I would be able to take full advantage of the capabilities of the device. A quick check of the marketing promises on the box promised 5000MB/s read, and 4400MB/s write speeds — can that be right? I was eager to break out the testing tools.

I did a lot of testing on the FireCuda 510 versus SSDs and a 12 TB mechanical drive in my review of that drive (you can read it here), and frankly it is a complete blowout. It’s patently unfair to even compare an M.2 drive with anything else on the market. As such, I’ll be doing comparisons with the 510 and against both synthetic benchmarks and real-world transfers and recent game loads. Let’s get rolling with a head-to-head between the 510 and 520. 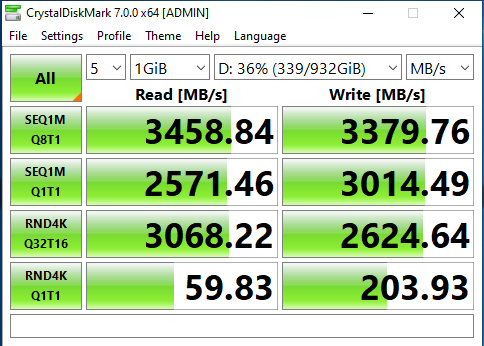 CrystalDiskMark test of the Seagate FireCuda 510. 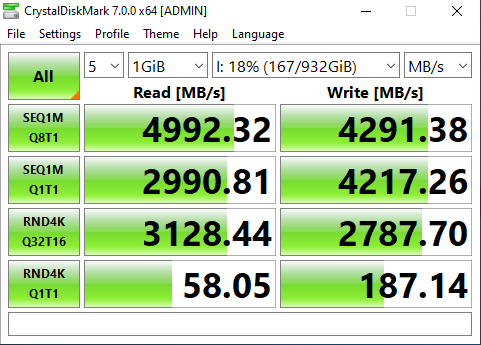 The CrystalDiskMark test of the FireCuda 520.

As you can see, there is a 69 percent increase, going from an already-impressive 3472 MB/s on the FireCuda 510 to an eye-wateringly fast 4992 MB/s for sequential reads on the FireCuda 520. Write speeds saw a similar increase (75 percent) with write speeds hitting 3236 MB/s for the 510, and 4291 for the 520. Re-running the ATTO benchmarks several times, and at empty, mid, and full states yielded strikingly consistent results, meaning the device can read from anywhere on the NAND with the same efficiency.

I like to do cross-comparison with tried and true ATTO Benchmark as it can perform direct I/O tests across many different block sizes, and across multiple file sizes. This time we’ll compare the 520 on an Intel system against the Seagate 520 on a Ryzen-equipped motherboard. 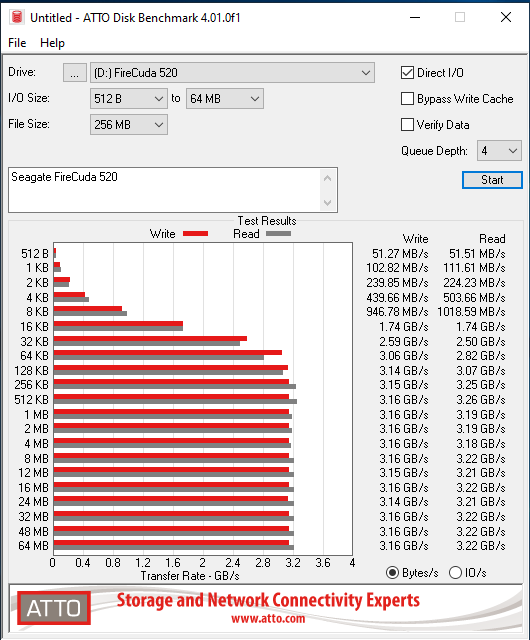 ATTO Test on a 520 on an Intel-based system. 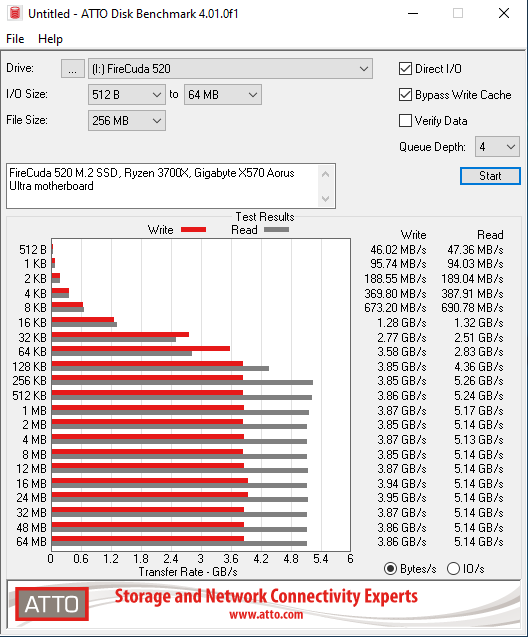 ATTO Test of the Seagate FireCuda 520 on a Ryzen-based motherboard.

Unlike a mechanical drive where read speeds are greatly dictated by the distance to the edge of the platter, and the depth of which disc data exists, an M.2 drive is incredibly consistent across the entire sector. Once again we see the 510 hitting the 3.2 GB/s read speed and 3.0 GB/s write speeds across all file sizes, and we see the 520 hitting a staggering 5.2 GB/s read speeds and 3.86 GB/s write speeds. This doesn’t match up with the tests we saw with CrystalMark, but that is likely attributed to the method of testing. In reality, the speeds are closer to the advertised 4 GB/s.

Beyond synthetic benchmarks, I also wanted to test out real-world transfers. Pulling 30 GB of files from a pair of SSDs in RAID 0 yielded a consistent transfer rate of 679 MB/s. Pushing that same 30 GB payload between the 510 and 520 pushed that number much closer to 3.5 GB/s, with spikes up to 4 GB/s on occasion. This variance is largely due to the number of files within the transfer payload, with sustained reads and writes yielding more consistent results. Transferring 30GB from a mechanical drive took two and a half minutes, whereas transferring between the 510 and 520 with that same set of files took just 15 seconds. 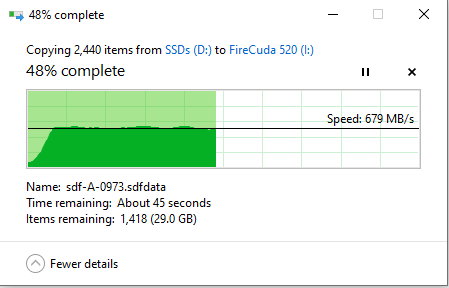 Copying from an SSD to the FireCuda 520 is still zippy.

Open world games are very dependent on how fast you can pull in and process assets. If you are unable to load textures quickly, this can manifest as immersion-breaking pop-in. Games like The Outer Worlds have fantastic draw distances, but on a mechanical drive, you can expect more than a little texture pop-in as you run through the landscape. Moving the game to an SSD helps dramatically, but shifting it to an NVMe M.2 drive eliminates the pop-in entirely, but comes with an additional bonus.

Sticking with The Outer Worlds, initial loading times (Clicking “Continue” to the point where the game is playable) on a mechanical drive can be upwards of 50-60 seconds. When the load times can be somewhat frequent, that’s a lot of sitting and waiting. An SSD can cut the loading screens in half, with times bouncing between 30 and 35 seconds. I have a second generation NVMe that slims the time slightly, hitting around 25 seconds. Moving the game to the FireCuda 520 makes the load times all but disappear, with the initial loading taking just 8 seconds, and most transitions taking roughly a second and a half. While the texture pop-in was eliminated even moving to the older M.2 SSD, the loading time reduction on this drive is impossible to ignore.

When you can stay plugged into the world developers have created with fewer immersion breaking interruptions, it’s a real game changer, but there are some additional uses that might interest you. If you do any sort of video rendering, an M.2 is a must-have. The additional write speeds took minutes off of complex renders, and when your PC is entirely consumed for that activity, any time reclaimed is gold. 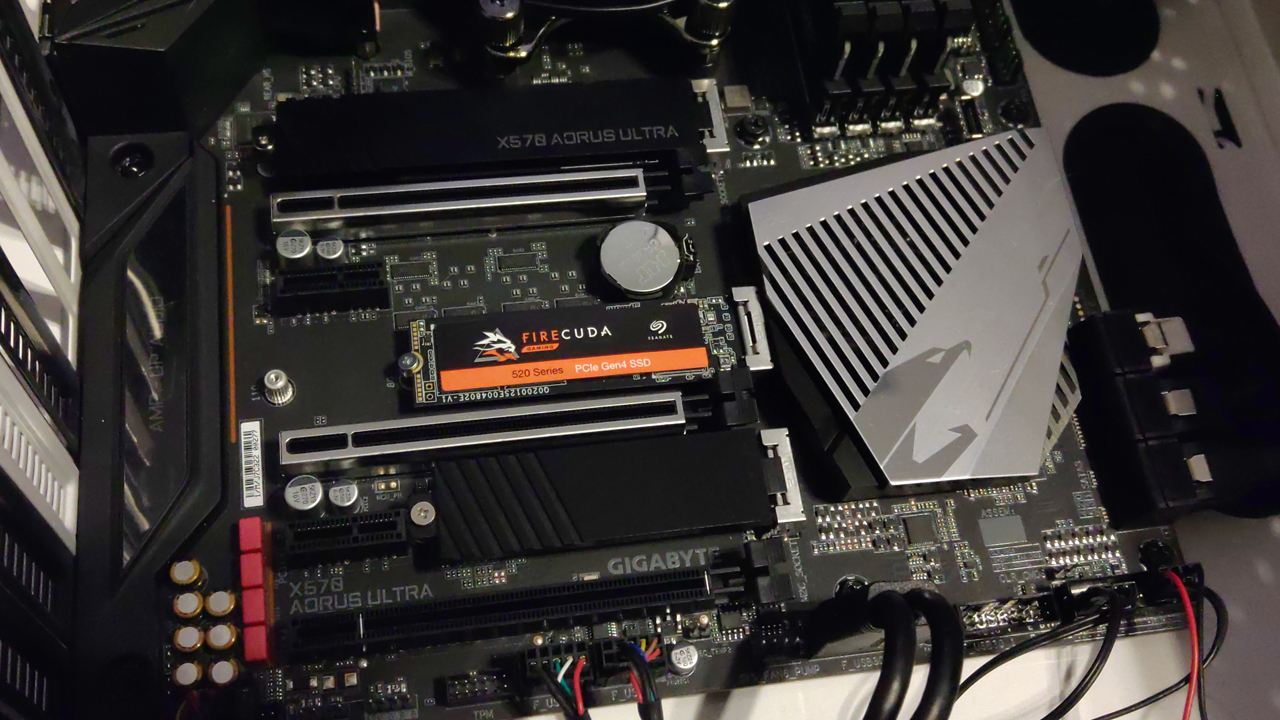 One of my largest complaints with hard drives, SSDs, and M.2 drives is that their warranties are all over the place. I’ve seen as low as 90 days, with a 1 year being the most frequent. Put simply, that’s just unacceptable. Historically, SSDs and M.2 drives have had shorter warranties despite having no moving parts. Seagate is bucking that trend by offering the same 5 year warranty they offer on all of their hard drive products. This gives me peace of mind that my data (or in this case, precious save files) will remain safe for the usable life of the drive. The FireCuda 520 has a Mtbf (Mean time between failures) of 1.8 million hours, with a TBW (Terabytes written) of 2800 TB. That’s a whole lot of time, and a whole lot of data.

I’ve read a lot of technical journals that insist that an M.2 drive “won’t change your videogame” but seeing my load times evaporate says otherwise. I thought the 510 was a huge step forward, but seeing the 520 in action is a quantum leap. If you’ve got a Ryzen-based system capable of handling Gen 4 SSDs, you need the FireCuda 520 in your gaming life.

Ron Burke is the Editor in Chief for Gaming Trend. Currently living in Fort Worth, Texas, Ron is an old-school gamer who enjoys CRPGs, action/adventure, platformers, music games, and has recently gotten into tabletop gaming. Ron is also a fourth degree black belt, with a Master's rank in Matsumura Seito Shōrin-ryū, Moo Duk Kwan Tang Soo Do, Universal Tang Soo Do Alliance, and International Tang Soo Do Federation. He also holds ranks in several other styles in his search to be a well-rounded fighter. Ron has been married to Gaming Trend Editor, Laura Burke, for 21 years. They have three dogs - Pazuzu (Irish Terrier), Atë, and Calliope (both Australian Kelpie/Pit Bull mixes).
Related Articles: Hardware, Seagate FireCuda 520
Share
Tweet
Share
Submit