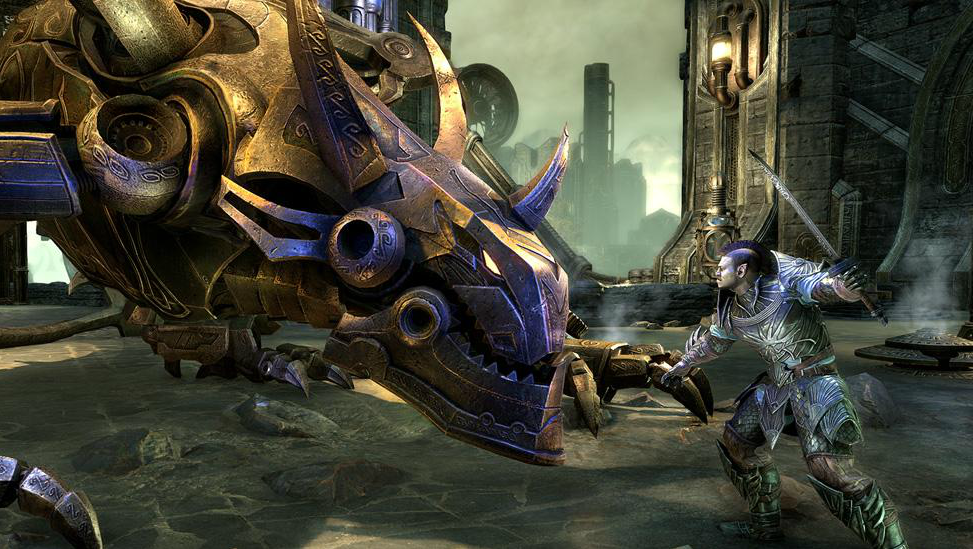 Of the three Tribunal gods in the Elder Scrolls series, Sotha Sil has always been the most enigmatic. While Vivec and Almalexia are in their respective cities, available for a meeting or brunch, Sotha Sil is the one you can’t just look up and go hang out with. The reason is his city isn’t like the others; his is a Clockwork City, a minute creation housing a sprawling fabricated world all his own.

With the Elder Scrolls Online’s most recent DLC, finally the go signal is given for entrance into the mysterious Clockwork City, and there is plenty of exploration, collection, and adventuring provided, if you are willing to traverse an incredibly confusing landscape and don’t mind constantly being lost and confused. For people focused on speed running, this zone is optimal in many ways.

The crown jewel of this new DLC is the large map it provides. An all new zone is a relatively common addition to the game, but this one is fully unique and made me feel like I was playing an entirely different title. It is pretty, and there are lots of natural landmarks to discover along with the standard points of interest. The new map includes a large city known as the Brass Fortress which shows off the steampunk futurism in full detail.

The creatures of this zone are called “Fabricants”, metal monsters created by Sotha Sil to mimic the dangers of travelling in the world above. They are strong and beefier versions of many of the enemies from other zones, remade as robotic creations that look very cool as well. There are other Fabricants throughout the world and city in the form of humanoids, either as enemies or NPCs that fulfill banking functions, sales, and other in-city services.

The problem that I have with the world of The Clockwork City is that it is beyond the pale of confusing in almost every way. The city is an impossible one to traverse, easily turning you around and running you into dead ends over and over again. Each little dungeon, area, or anything all suffers from this same labyrinthine feel, which makes me feel it is intentional. I get no satisfaction from the frustration of being lost in a game all the time, and I doubt there are many out there who disagree.

This release doesn’t do much in the way of delves, the one-player mini dungeons in ESO. With the two included we get much larger areas to explore and fight in, as well as multiple missions sending you back in. Part of me hates the way these delves are so simple and quick, despite the size, but the other part is grateful due to the sheer amount of time and grinding it takes to do most tasks in Elder Scrolls Online. It certainly seems to be intentional, along with the new Trial, to have these tasks be both quickly completed yet dense for exploration, depending on how you want to approach things.

The new DLC provides a 12 man trial known as Asylum Sanctorium that is by far the shortest in length of any trial the game provides. Unlike the others, which are long slogs through large dungeons and pockets of enemies, Asylum Sanctorium allows you and the party to choose how the trial will be approached, and you can ultimately face all three main bosses at once, given the team is strong enough to handle that onslaught.

This is a hugely beneficial thing for any speed running team, and can also lead to some very quick and effective levelling for weaker characters being “dragged along” so to speak. I like that this trial seems to be more inclusive for different styles of players, giving large benefit to the powerful and quick, but allowing for a more casual runthrough for other players not so dedicated to the game long term.

Clockwork City provides a whole new string of missions centered around a rising evil using shadow forms to assassinate prominent figures. These missions are fun but utilitarian in nature, especially if the story doesn’t compel you. The goings on in the Clockwork City are definitely intriguing but the MMO platform is terrible for its display. I have a hard time being compelled by the stories because the missions between are always the same few types recycled, and things get monotonous if you don’t rush through, which sacrifices the story.

There are a few game improvements that came along with this release, though separate and available to all Elder Scrolls Online players regardless of if they own the new DLC or their paid player status. It’s by and far a massive update for the “crafters” in the game, giving new heads up designations to items needed for trait researching, as well as clear markers for items that either sell for more, or are designed to give a bigger boost to the crafting skills when broken down. There are several other small changes to the look and feel of the menus and heads up display.

It should be mentioned that one thing the Clockwork City does is fan the flames of a semi-obscure conspiracy theory that the world of Tamriel is in fact the long forgotten and reshaped world from the Fallout series. The fabricants of the Clockwork City are very reminiscent of the robotic entities from the Fallout games, and many of the metal grates and hallways in various spots throughout the zone feel almost like the metro system from Fallout 3.

The Clockwork City DLC is an overall improvement on Elder Scrolls Online and has a lot to offer in terms of exploration and adventuring in-game. There are some instances where events go by too quickly, but many players will find great benefit in that while others will balk at it. The map also is littered with confusing paths and dead ends. Overall, the new DLC has a great unique look and is packed with enough new content to be essential for any dedicated Elder Scrolls Online player.

Patrick Rost has been with Gaming Trend since 2013. At first focused on sports coverage, Patrick has gone on to cover a wide range of games and other products for the website. Outside of Gaming Trend, Patrick writes and records music, grinds perpetually in Elder Scrolls Online (PS4), and lives day to day with his two dogs, Bob and Stella.
Related Articles: Elder Scrolls Online: The Clockwork City
Share
Tweet
Share
Submit