Have you ever wanted the power to build your own kingdom? Rally your citizens to gather resources in order to build infrastructure? Use powerful magic to transform and claim land as you see fit? Driftland: The Magic Revival puts you in the shoes of a mage as he works towards rebuilding Driftland after a catastrophe. It’s going to take time, planning, and effort, but you’ll do what it takes to get the job done.

Driftland: The Magic Revival is a combination of RTS and god games. You’ll be managing resources in order to build up your civilization while shaping the world around you with magic. The campaign consists of the stories of several races, including humans, dark elves, and dwarves. Each race has their own storyline, citizens, troops, buildings, and magic abilities. You start off playing as humans and must complete all of their missions before unlocking the other stories. Every mission gives you a small starting setup that you must expand upon in order to complete that mission’s objectives. Objectives can be anything from reaching certain population numbers to locating designated NPCs to obtaining important items to defeating other kingdoms and more.

When building upon your kingdom, living quarters and food production buildings are crucial. Living quarters increase the number of citizens that you have, which increases the amount of money that you earn per day. Since everyone needs to eat, you need to make sure enough food is being produced to feed them all every day. Each citizen only requires one food per day, which is easy to remember and doesn’t take much of a toll on your supply. Citizens have a daily wage as well, so making money at a fast rate is incredibly important. 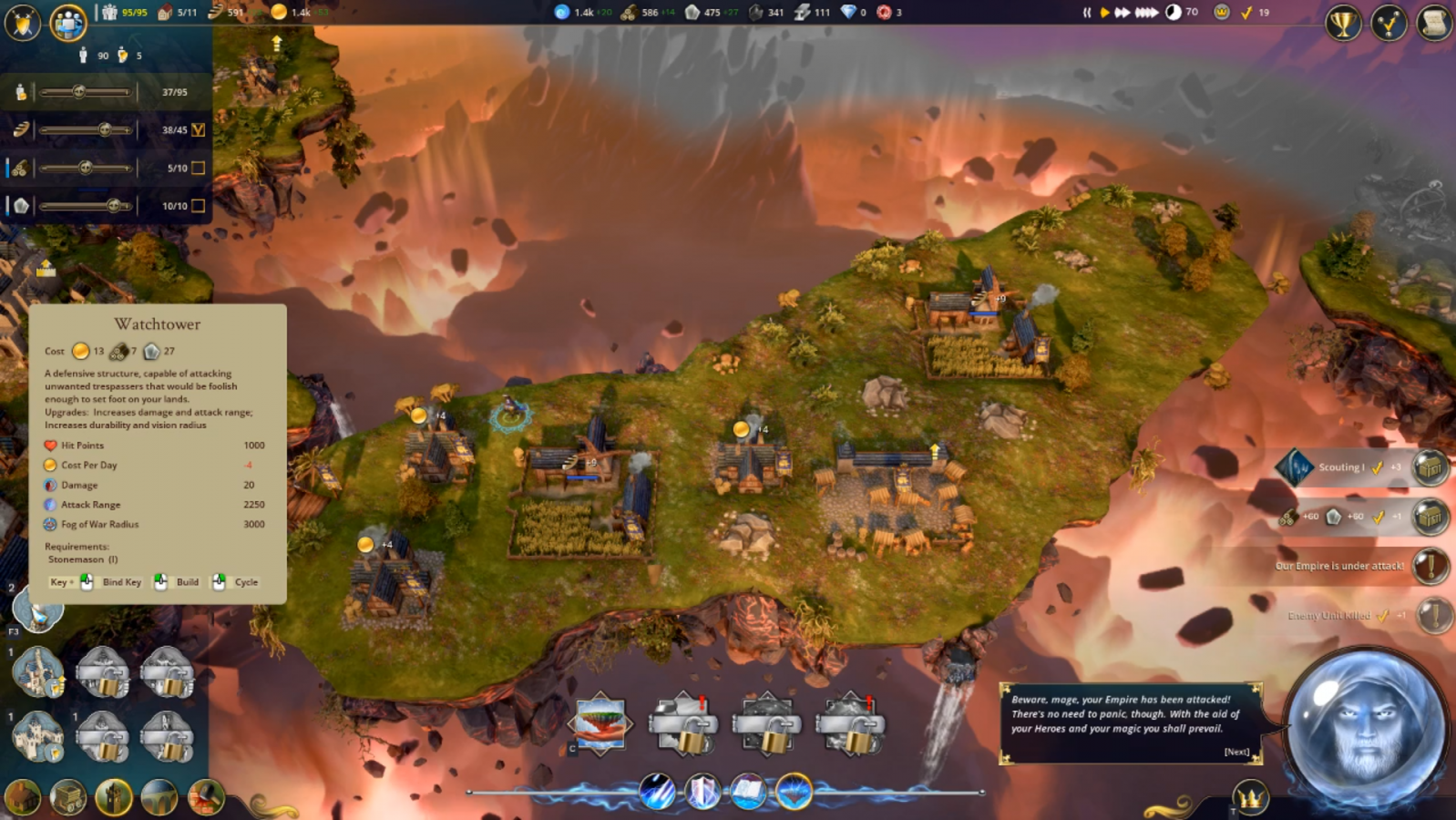 Other buildings that are important are the plethora of resource collectors such as stonemasons, iron mines, coal mines, lumberjacks, diamond mines, and more. These collect their specific resources at a steady rate per day, which increases when you have more people assigned to that location. Each building can only have five citizens assigned to it at first, but upgrading them increases that by five each time. Buildings have a max level that they can reach though, so you can’t upgrade infinitely. Upgrading is very helpful because it allows you to collect more resources within the same structure. You want to minimize the number of structures you have because each structure costs a set amount of gold to maintain per day. Upgrading doesn’t change this cost at all, which I think is a great idea. Not having to worry about increased maintenance costs due to upgrades is a weight off your shoulders.

The world is covered by the fog of war and the only ways to dissipate it are by building structures, which remove some of it, or by sending units out to explore. Buildings can only be placed in clear areas, so you aren’t able to put them anywhere you want. Exploration units only clear the fog in the area around them and it only lasts for a short time. I wish that the fog would stay gone permanently after you’ve cleared it once, as it would help immensely being able to look over every area that you’ve explored before. Expanding your kingdom helps remove the fog, and one of the best ways to do that is by exploring islands that are near the ones you occupy. Once the fog there is gone, use your magic to pull the island closer. When it is close enough, you can build a bridge to it and enable your ground troops to reach the island. This gives you access to the resources of that island, gives you more space to work with, and even gets you closer to other nearby islands. 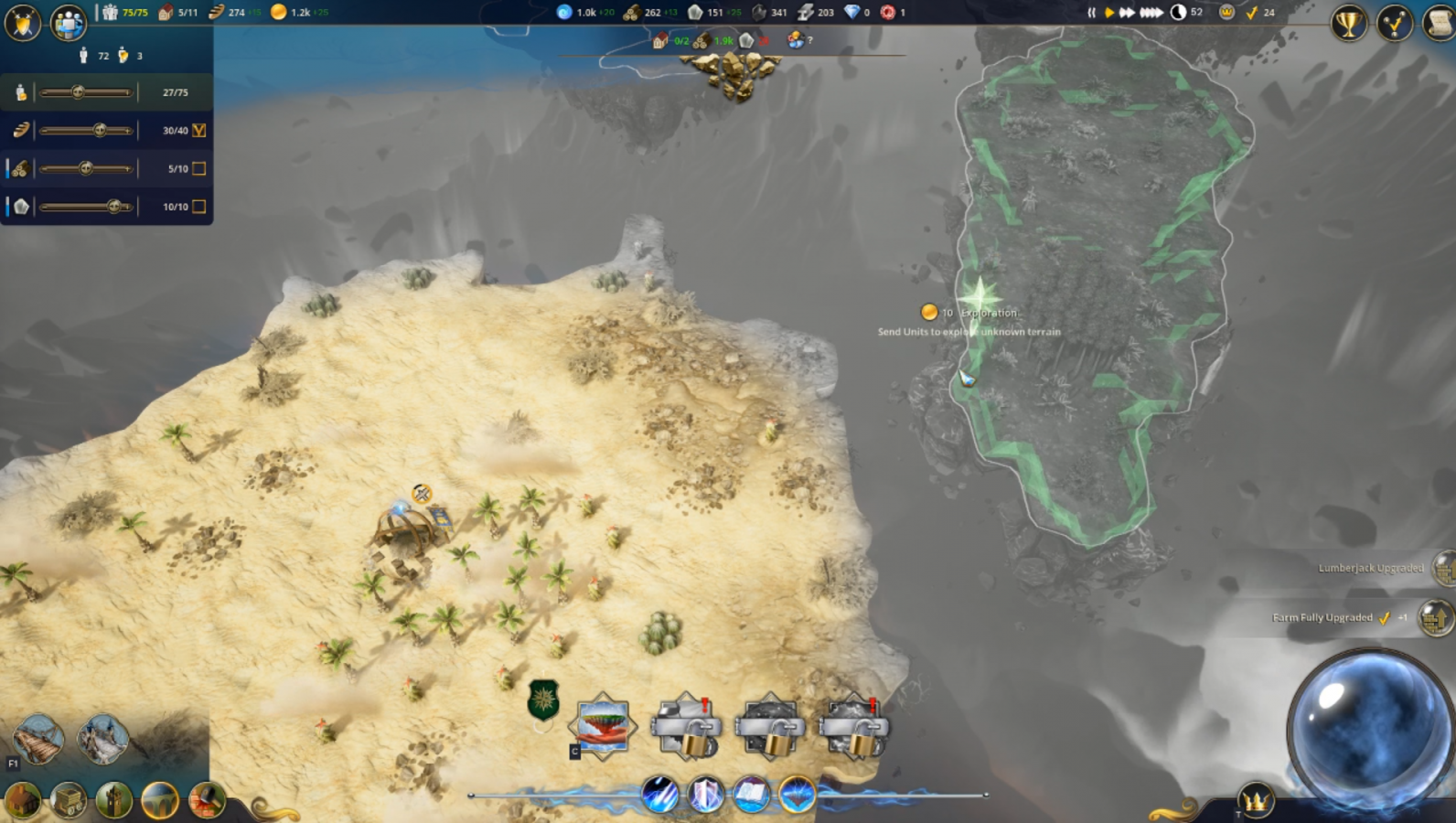 One of my biggest issues is the way the units respond to your commands. The game boasts that you don’t have to give specific orders, but instead give general goals for your units to complete. At first this seemed like a good way to remove micro-managing and give you more time to perform other actions, but it has its downsides. For example, when I command my units to explore, only one of them goes to that area. I have to request multiple explorations in order to get more than one unit to head to an area. Fighting is even worse; there were many times where I sent units to battle and only one or two would go. I would command an attack on enemy units again in order to get the units in battle some backup, but nobody would come to their aid. Sometimes one troop would answer the call, but it felt like it rarely happened. Meanwhile I’d look over at my kingdom and see multiple soldiers just wandering around aimlessly when they should be fighting. There’s no way to move individual units specifically, which I see as a huge problem. It could somehow just be an issue with me, but I haven’t been able to get my forces to follow my orders. The game does mention that the units have their own free will, but there’s a limit before that becomes a hindrance.

Thankfully the free will aspect doesn’t affect building assignments. When you assign citizens to buildings by using their respective slider, they stay there and work without question. I think I’d have a fit if they had the chance to abandon their job site. You can adjust how many people are working on earning each resource on the fly and it updates immediately. This speedy change is a blessing, and so is the ability to fast forward at will. Fast forwarding is perfect for when you have a good production rate going and want to power through saving up resources. 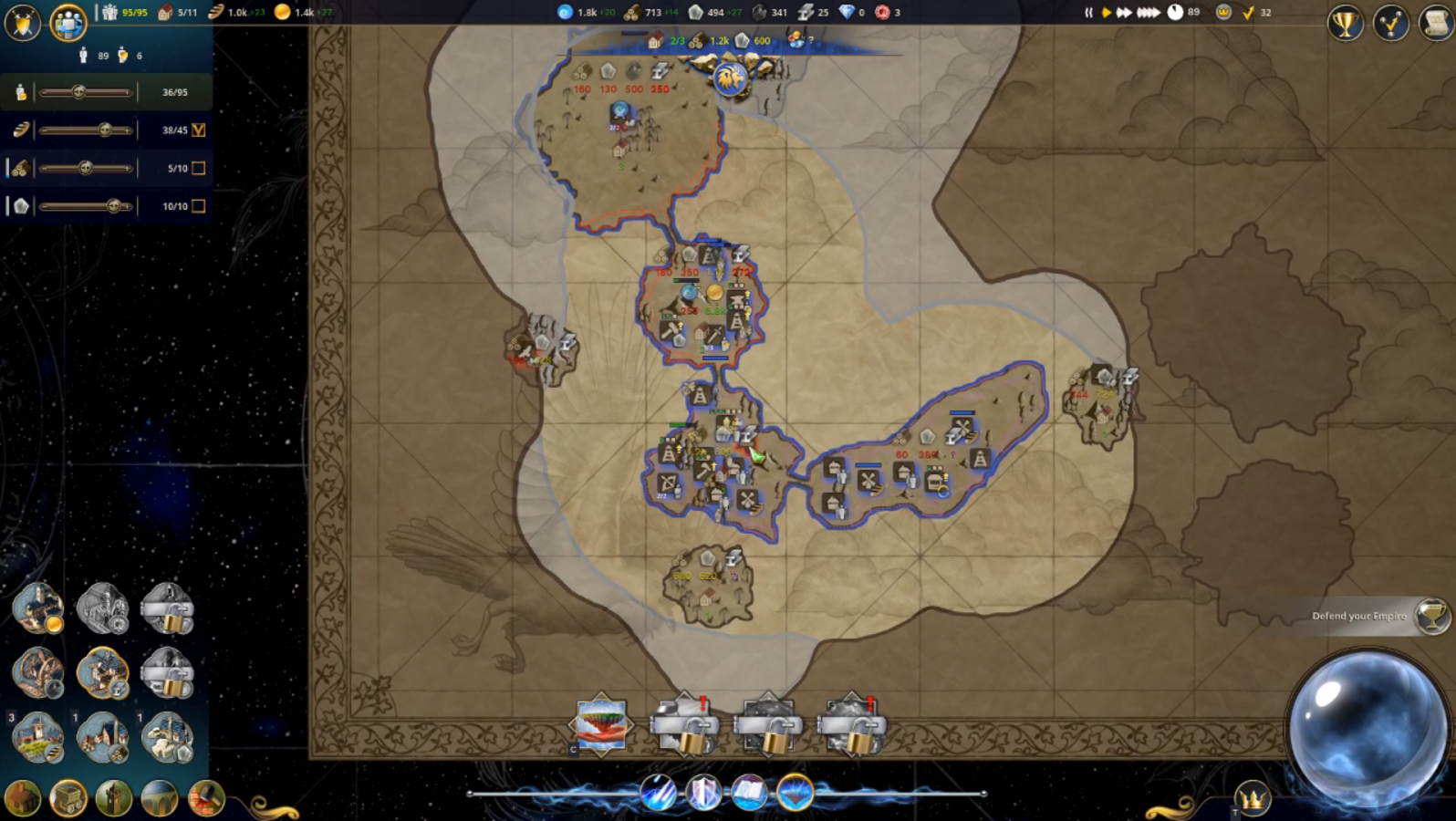 There are a lot of resources to manage, structures to build, and area to cover, so you have a lot to keep track of. Planning strategically is crucial to avoiding going broke, starving your citizens, or having your kingdom destroyed by enemies. You can’t just build constantly and suffer no consequences. The hardest aspects of the game are the free will insubordination of your units along with the resource management. On the bright side, the fantastical tone of the music and world design are a treat. You get the feeling that you are helping the people of this land. That being said, Driftland: The Magic Revival is an interesting RTS and god game mix. If you like resource management, building up a small society, and using magic to alter the world, then this might be the game for you.

Driftland: The Magic Revival is a mix of RTS and god game that focuses on the realm of magic. The indirect control of individual units and their free will can lead to insubordination, which ruins the fun. Planning out your moves is the key to success.

Codi loves to play video games and watch movies. He will watch almost any kind of movie just to experience them. His ideas take inspiration from the shows and movies he watches, and games he plays. He also loves a good pun.
Related Articles: Driftland: The Magic Revival
Share
Tweet
Share
Submit