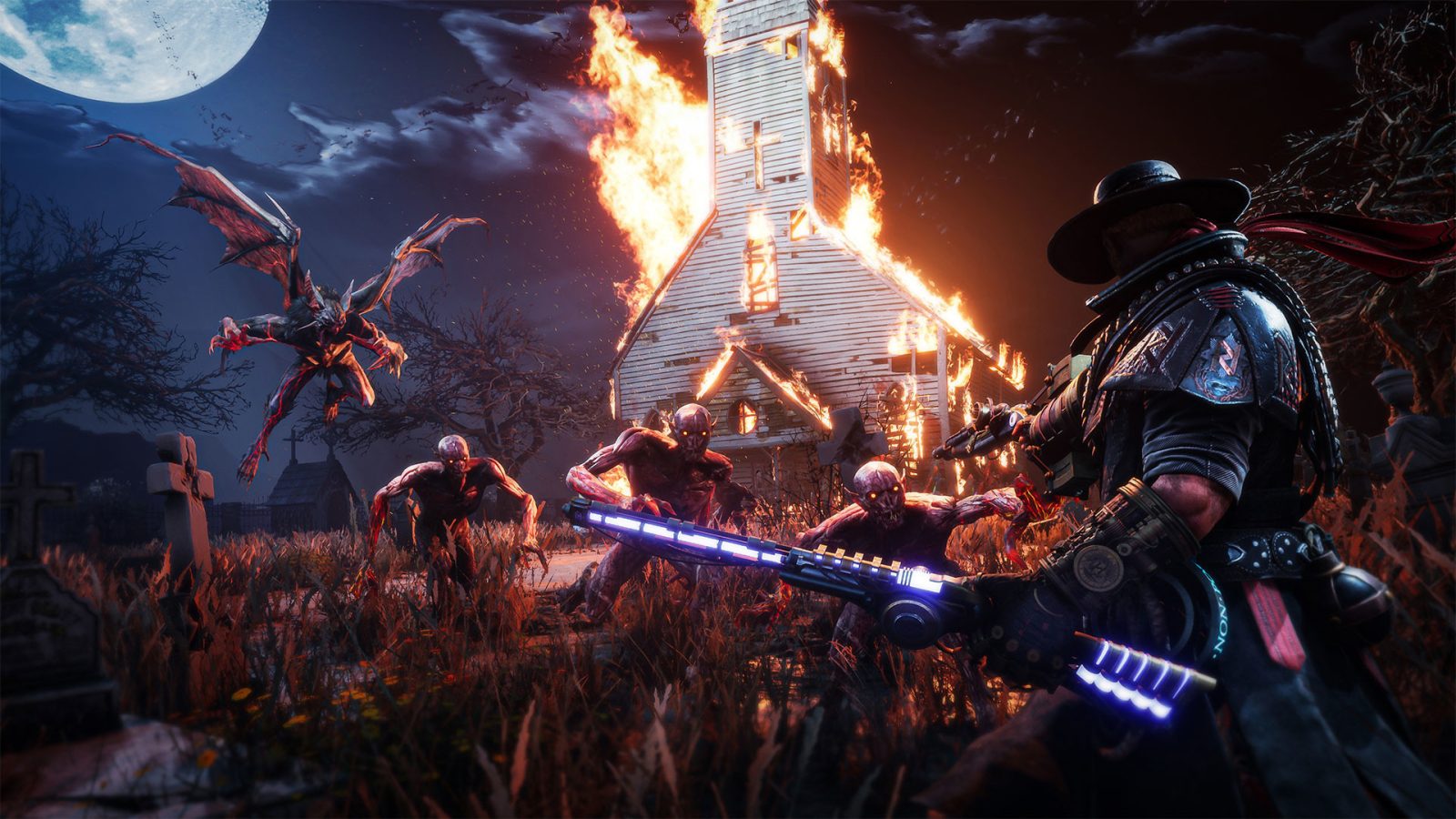 Sometimes a game like Evil West is just necessary. You get home after a hard day at work and you just want to unwind. There are other things; competitive shooters like Call of Duty, or intricate story games like God Of War Ragnarok. Those are fun, and certainly ones I play when I can, but sometimes you don’t want to put a lot of thought into what you’re doing. While Evil West has its intricacies, I’ve found it to be the perfect way to lounge back and just bust up some baddies.

In Evil West you are Jesse Rentier, part of an organization dedicated to the eradication of vampires. Everything is happening around the time of Grover Cleveland’s presidency, in an insane alternate history of the USA. You’re on what seems to be a standard mission; hunting down the cabal of bloodsuckers, when after killing one of them and taking the head as a trophy, you find yourself in deep trouble. The institute headquarters are attacked and demolished, your father, the leader of the organization, is gravely wounded, and a little girl vampire makes off with your trophy vampire head. It’s all up to you to save the day, because there ain’t no cavalry riding in at dawn.

To start, the story feels like it takes a bit of a backseat. Sure, there’s a few fun characters, and things start to pick up in the second half, but I often didn’t really know what was going on. I have no idea how the vampires came to be, why this struggle exists, the history of the institute, and more. I know there is lore you can pick up from time to time to figure things out, but such an intense action game doesn’t deserve to be slowed down by menu reading. Maybe if I played Evil West through again I’d pick up more, but I’m not so sure I would. On the plus side, it is corny and campy, even if it sometimes seems to take itself too seriously. I still really don’t have a grasp on why we’re chasing vampires, and it makes the narrative come across as underdeveloped.

Something similar happens with the characters, with Jesse and Vergil being the only ones I gave a crap about. Everyone else is just there, and even though several cutscenes attempt to pull me in, there isn’t enough in the gameplay to make me care. Vergil might be the weirdest character you encounter, and his extreme awkwardness pays off in making him a favorite. With Jesse, I’m only invested in his plight because he’s the main character. I’m not sure you could do a lot more with what they have, it’s just how these characters are written.

As for the gameplay itself, think The Order 1886 meets Bulletstorm. It’s by far the biggest reason you’re here, and it’s definitely why you will stay. There’s nothing like shooting a nasty boo-hag with your rifle, parrying another via your electric gauntlet, beating the living daylights out of that one while he’s electrocuted, and shotgunning another in the face. Make sure you take a break and a breath, then uppercut a minion and punch it straight into a mini-boss, before delivering a devastating finisher by ripping its head off. You’ll be doing a lot of the same things over and over, going down the old “kill dudes in area, go down hallway, repeat”, but because it’s so fun it won’t matter a bit. 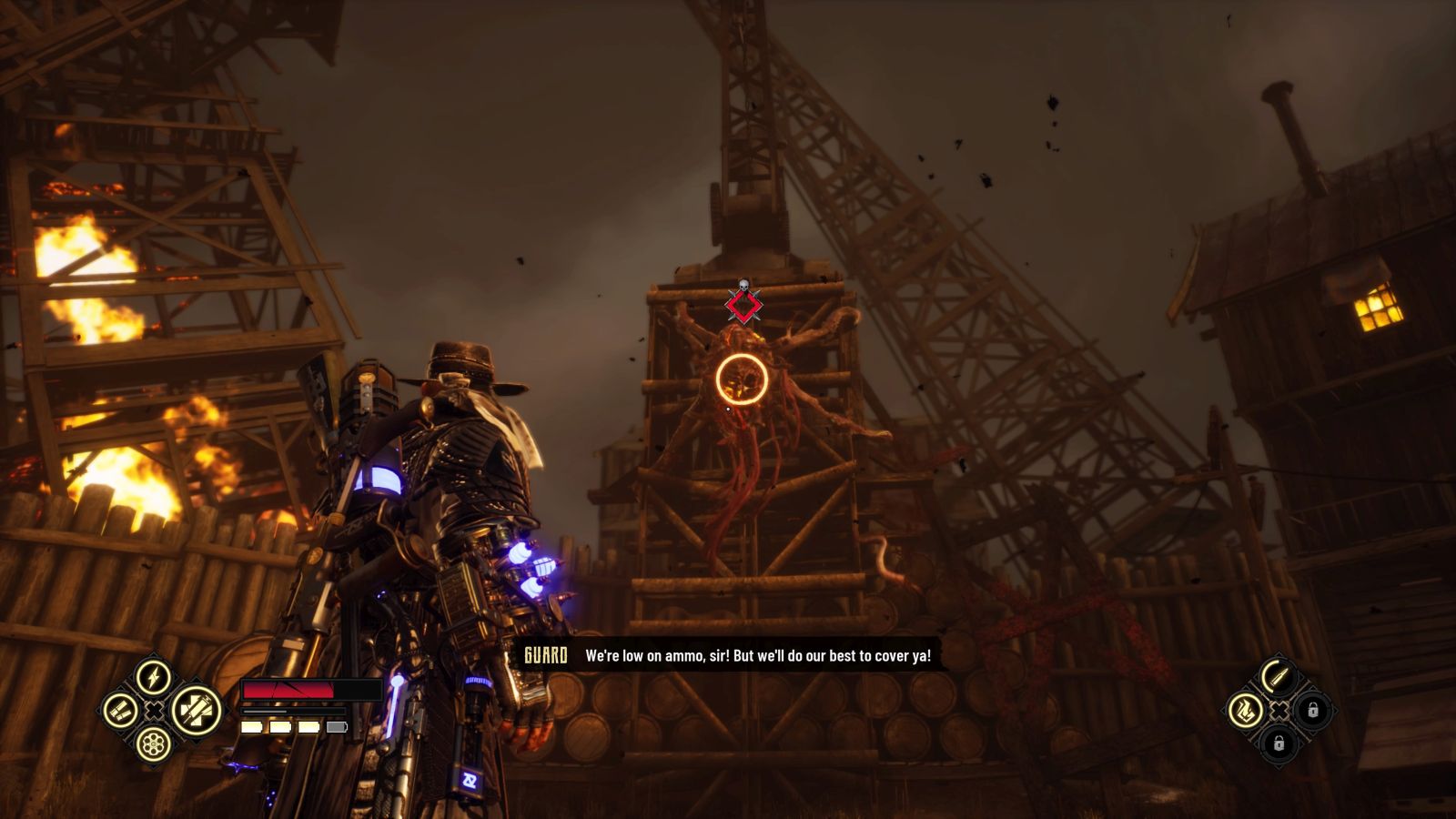 Part of this is because they continue to find ways to make things fresh, even if it’s not a huge departure from what you’re doing. The route through enemy territory won’t change, you’re doing the repetition we mentioned before, but how it occurs is where the changes lie. Evil West features quite a few different enemy designs, with grunts, heavies, flyers, long-distance fighters, and mini-bosses galore. Somehow it doesn’t feel exactly the same each time, although one or two are very similar. Sometimes you’re in the middle of nasty zombie-like creatures, then you’re fighting cowboys, then a werewolf comes out of nowhere. The thought that went into Jesse’s rogues gallery is fantastic, and it makes the game flow even when it shouldn’t.

The boss battles are equally as good, if not better. It takes a lot to capture the bombastic scale of a boss fight nowadays, and few games manage it. I mourn the loss of over the top boss fights, with only a few standing out in recent memory. Evil West makes the cut though, with both mini-bosses and chapter bosses on another level compared to other games. The Parasiter is especially amazing, with a gameplay loop and attack patterns you’ll probably need to tackle a few times to finish. The learning process is worth it though.

Learning the combat loop is where everything pays off in Evil West. I mentioned a little bit earlier, and words don’t do it justice. Not every encounter is shooting baddies at a distance or punching them in the face, you’ve got to figure out the flow of combat, and once that clicks, the ballet of blood begins. I didn’t expect to be using melee combat nearly as much, but after using the electric gauntlet and its many functions, I was wailing on almost anyone that came near. Evil West almost approaches being a fighting game; there are many different ways to combo up your arsenal to get good results. If I need to reload my rifle, maybe it’s time to do a shotgun blast into a gatling gun barrage. It’s over the top violence at its best, and probably why so many thought of Gears Of War after its first reveal. If anything, it tops Gears in that area, and it’s funny to watch the other enemies recoil in terror when you’re smashing their companions face in. 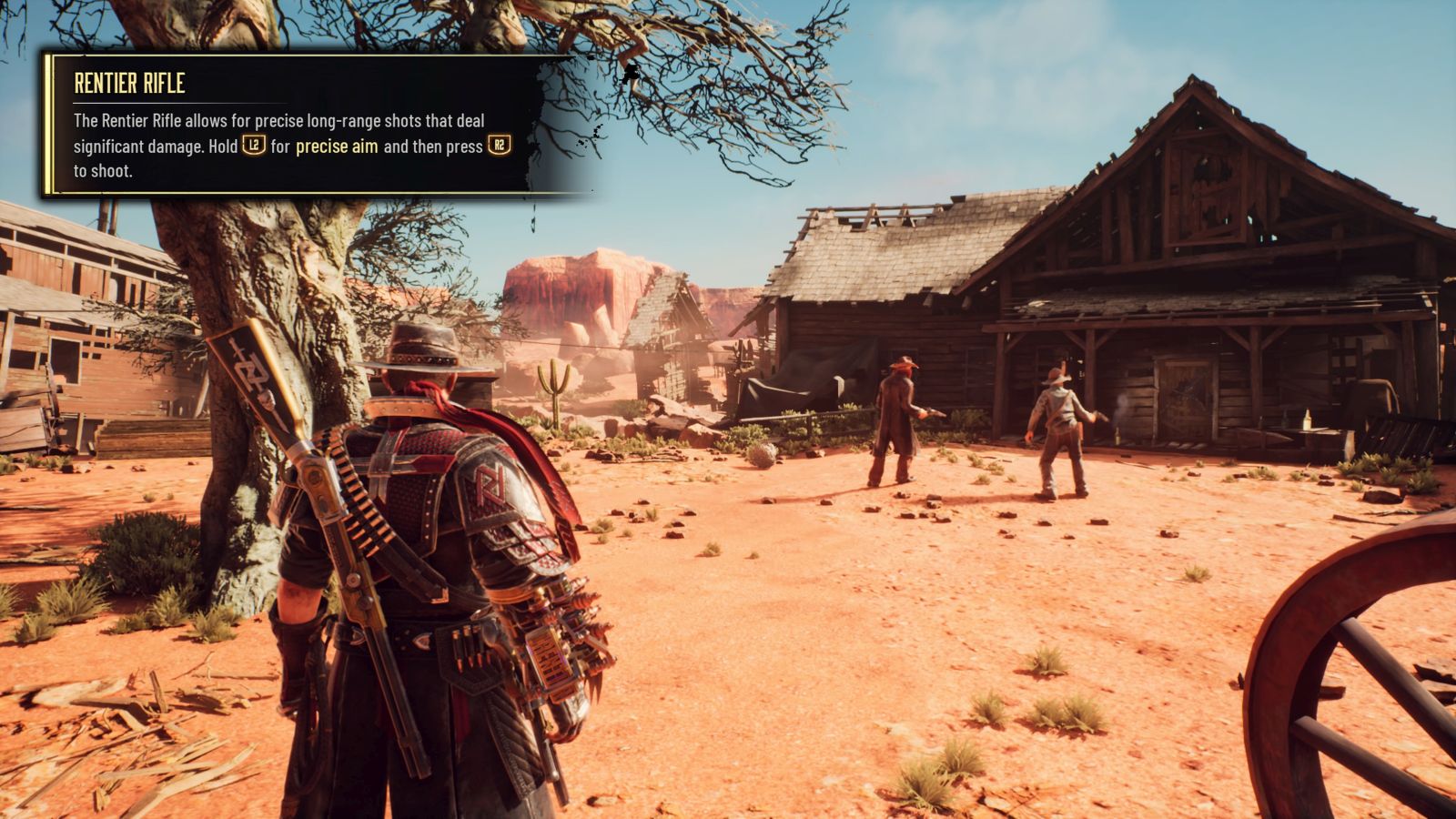 Some of the best ways to get the best combos rolling is by leveling up Jesse, via either perks or upgrades. It’s your standard affair, with each weapon having a list of abilities that are unlocked by either a level gate or purchasing it via money collected, and perks by gaining XP, which you then use on a skill tree. While not everyone may think this idea is as cool, there are some perks you may never get, hidden in boxes you can find in the levels. In my opinion it incentivizes you to search for secret paths, but not everyone will agree.

One of the things I think many of us grabbed from the trailers was the visual fidelity, and Evil West lives up to those expectations. While the preview build I played earlier in the year was a bit rough around the edges, the final version of the game is quite shiny and more akin to the trailers we’ve delved into. I’ve played in performance mode, and even at 1080p Evil West is gorgeous. I want to play it in 4K for comparison, but the 1080p mode is so smooth at 60fps, I’m not sure it’s worth the 30fps cap. Not many story games need the extra fps boost, but the way Evil West plays makes it much more appreciated.

The visuals are stunning, but unfortunately the audio is lacking. Not the sound effects mind you, as the explosive blasts and squelchy rips are pretty good, but the dialogue. For whatever reason it’s not tuned right, with the characters sounding a bit further away than they should, including Jesse. Jesse is really bad, with his lines coming out with either too much gain or treble. Maybe it’s something that will be fixed in a day one patch, but it’s bad right now.

Evil West doesn't reinvent the wheel, but it doesn't have to. It's fun and a great time, which is all it needs to be. It reminds me of a wonderful B-movie; I watch it because I like to turn my brain off and just enjoy myself. Evil West is just a blast, and worth sinking your teeth into.

David Burdette is a gamer/writer/content creator from TN and Lead Editor for Gaming Trend. He loves Playstation, Star Wars, Marvel, and many other fandoms. He also plays way too much Call Of Duty. You can chat with him on Twitter @SplitEnd89.
Related Articles: Evil West
Share
Tweet
Share
Submit