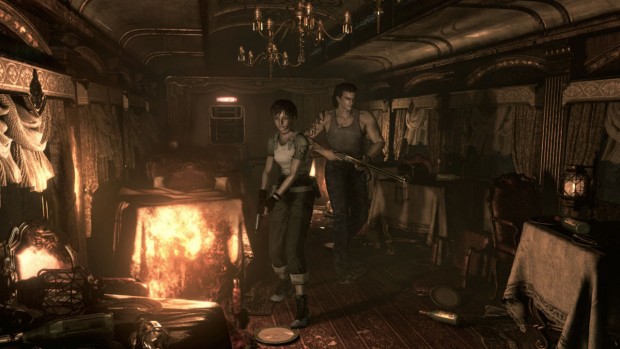 With the resurgence of remasters and re-releases in this industry, the survival horror genre has typically proven itself to hold up surprisingly well. Last year’s Resident Evil HD Remaster was a prime example of how a little bit of visual polish and control adjustment can make a classic game feel fresh again, while still retaining an emphasis on fear. Thankfully, Resident Evil 0 HD proudly follows in its predecessor’s footsteps. Resident Evil 0 HD still offers nerve-wracking moments, while playing remarkably well with a few new bells and whistles for modernization, despite some elements that show its age.

Initially released on the Gamecube, Resident Evil 0 HD features a remastered campaign from its 2002 release. As a prequel to the events of the original Resident Evil, this HD remaster takes place before the infamous mansion incident and zombie outbreak in Raccoon City. Following a string of bizarre murders outside of the city, players take control of rookie S.T.A.R.S. agent Rebecca Chambers as the investigation leads her aboard a mysterious train littered with the undead. After crossing paths with escaped convict Billy Coen, the pair must get to the bottom of the strange happenings while working together to survive.

Visually speaking, Resident Evil 0 is a bit of a mixed bag. As a remaster, rather than a full-on remake, the HD upgrade still features all of the grainy textures from 14 years ago. The HD remaster now features a crisp 1080p resolution, as well as widescreen support, but some areas still look particularly flat. Pre-rendered cutscenes can be especially bad, with muddied animations now shown in greater visual fidelity – on top of the already emotionless faces and laughable voice acting. While Resident Evil 0 is one of the most visually striking Gamecube games, and its port to modern machines still impresses at times, those looking for a full graphical rework will likely be disappointed.

When “play dead” gets too real.

Luckily, Resident Evil 0’s gameplay still works wonderfully, with intelligent puzzle design driving the fear-laden experience. The horror element still sets the mood for the entire adventure, and while it feels like there were fewer jump scares than the original Resident Evil, the moment-to-moment gameplay is still accompanied by tense nerves any time you press forward into undiscovered rooms.

There is also a reworked control scheme to help the game feel more intuitive from the original’s tank-like controls. This new configuration is not always perfect, as you’re still at the mercy of some of the game’s outdated mechanics, but it is still significantly improved in comparison to the clunky movement of the original.

The two-character gameplay style still works great as well. Players are able to control both characters simultaneously, or individually, with a few customizable parameters available to dictate teammate behavior. Utilizing the strengths and weaknesses of both characters becomes essential to survival, and puzzles that involve splitting up tend to be cleverly done. However, these puzzles are often preceded by lengthy moments of item exchanging to ensure each character is equipped for the situation. Having two simultaneous characters means twice as much firepower, but with item management limited to six slots per character, there is a greater need to monitor the resources of both heroes. Exchanging items feels clunky and cumbersome, and needs to be done frequently, hindering the game’s pacing. It’s not enough to ruin the two-character gameplay, but becomes frustratingly tedious when you’re eager to dive into the action.

Not the quiet car we were looking for.

Unfortunately, Resident Evil 0 HD is not without some familiar series annoyances. Chief among them are the fixed camera angles that offer a more cinematic experience at the cost of what is visible to the player. Aiming is already considerably difficult, especially against dogs or crows that are not always at the same height as you, but add to that the fact that you can very rarely actually see what you’re shooting at, and combat often boils down to a literal shot in the dark. Navigation can be especially difficult as well, with camera angles that often change suddenly, leaving your character abruptly facing a new direction and causing disorientation. Coupled with teammate characters that frequently block your way – tight hallways are particularly annoying – and general movement becomes a burden. These are all mechanics that are so deeply ingrained in the core experience that they could not be removed without retooling the whole game, so it’s understandable why they still exist, but the camera frustrations lead to Resident Evil 0’s greatest show of age.

One last addition to the game comes in the form of the all-new Wesker Mode. Unlocked after beating the main game, this new mode lets players control the Uroboros-powered villain from more recent Resident Evil releases. Intended as more of an over-the-top bonus, Wesker comes with the ability to charge up a focus attack that acts as a one-hit kill against most non-boss opponents. Much to comical effect, Wesker literally replaces Billy throughout the entire game, with Rebecca still calling him by name, and Wesker retaining Billy’s voice and dialogue. The Wesker Mode is a laughably silly addition to an otherwise serious game, and offers fun post-game content that will make players feel overpowered at all times.

Much like last year’s HD remaster of Resident Evil, Resident Evil 0 HD’s core experience has mostly aged gracefully. Familiar camera struggles still leave this franchise with one foot stuck in the past, but Capcom’s updated controls help work around those minor annoyances. Most importantly, though, the Resident Evil formula still holds up well. Resident Evil 0 HD is a great survival horror experience with enough scary moments and tense gameplay that should appeal to series veterans and newcomers alike.

Gaming Trend's resident amiibo collector, Matt's a lifelong gamer with a soft spot for Nintendo. As a new father, Matt often struggles to stay as involved as he has been in years past but can always be counted on to come back for some engaging geeky conversations. A resident of Philadelphia, he is currently working on building up his Man Cave with all things Marvel, Star Wars, and Video Games. As an old-school gamer, Matt firmly stands by his belief that gameplay will always be more appealing than story.
Related Articles: Resident Evil 0 HD Remaster
Share
Tweet
Share
Submit