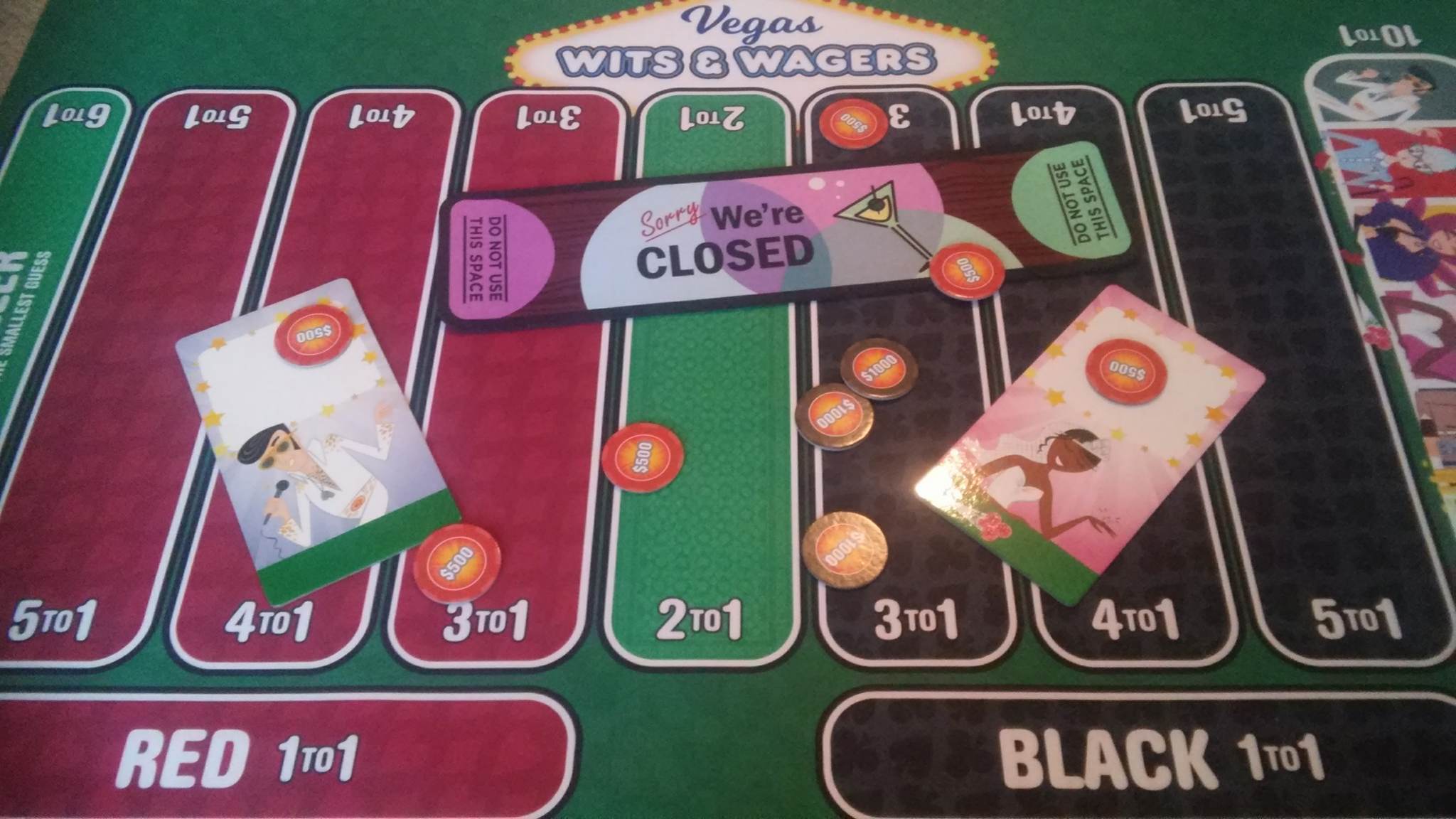 Wits and Wagers Party Edition has been an outstanding, family-friendly party experience for a long time, and the new Vegas edition only makes the game better. Adding in new wagering mechanics, ways to leverage your knowledge of your friends as much as different information, and (perhaps most importantly) new questions to challenge yourselves with, this expansion is an excellent choice for anyone who wants to supplement their Wits and Wagers experience.

For those of you unfamiliar with Wits and Wagers, the base experience is centered around guessing the answers to questions you have no way to know beforehand. These questions range from the absurd to the obscure, such as how many feet measure the tip of the Statue of Liberty’s right arm to how many car accidents were attributable to moose in a city in Sweden. The point is to make as educated a guess as you can, but the strategy goes far beyond that. In the base game, everyone makes their guesses in secret, using small dry-erase whiteboards, and you then line them up in order from least to greatest. After that, each player bets on which answer they think is the closest without going over. You win points if you guess correctly, but also for having the right answer. However, you may want to skew your answer in anticipation of someone else, putting yours close to correct to lure other’s guesses away, or low enough to be a safe bet.

Don’t you look these up. Being tantalizingly uncertain about these wacky queries is the point of the game

The Vegas edition expands primarily on the wagering aspect of the game, though wits are still key to any victory. Contained within the expansion is a rollable cloth player board outfitted with new areas to supplement the betting phase. one side functions as the original Wits and Wagers board, while the other has the Vegas changes: the betting areas are now broken down into the middle guess and those on either side. Red is lower than the middle bet and black is the higher. The further you get from the average, and therefore the de facto safest bet, the more you stand to gain. The middle bet itself is a two to one gain should you succeed, while each space farther away gives you more to gain, from four, five, or six to one. You can also play it safer by betting that the answer will be either higher or lower than the middle bet, getting the same number of chips back as your bet if you are correct. The board also has stylistic cloth “We’re Closed” signs that effectively cancel out player locations while remaining fairly unmovable. The color changes are well considered, and help make playable and nonplayable areas very distinct.

The Vegas edition has one final betting zone that lets you really test your brain: before answers are revealed, but after everyone has made their guess, you can choose to bet not on any given area, but on a specific player (or team if people are playing together). If you are right you win your bet 10 to 1, which is by far the best way to gain points quickly. If there is someone at the table who you think is sure to know (or more likely be able to approximate) a specific answer, you can bet on them specifically for a huge bonus if you are correct. Party games are always best for their capacity to make people interact with one another, and this change brings you together that much better with your other players. You’ll be sizing one another up, learning areas of relevant knowledge, and testing how well you can gauge one another on those issues.

While there are a few hiccups with the new release, they mostly do not detract from what is a welcome and invigorating game of hedging your bets. At times, the math behind placing bets feels more like flavoring than genuine gameplay. Your choices are far more often driven by which answer you feel is best, rather than the odds at play in each position. Especially as a family experience, I found people who didn’t want to get invested in weighing odds against one another. Essentially, Vegas emphasizes aspects that were already at the core of Wits and Wagers: hedging your bets when you are unsure but giving you a way to enhance your confidence and put it all on the line. Most of the time, that emphasis benefits the experience, tying the expansion into the strengths of the base game. At times you can feel that you and the other players are ignoring the expansion’s mechanics and focusing on the main game’s instead.

I know it’s a small thing but these boards manage to be diverse, entertaining, and accurate at the same time, and it’s a very nice touch. North Star does good work

The player mat is detailed while still being easy to understand, but presents a minor problem: it takes up a great deal of table space, and makes for some awkward transportation. The “box” such that it is for Vegas is a cardboard tube, containing the cloth mat with the rules, chips, and questions just sort of shoved in awkwardly. Because it started its life rolled up, the rulebook will be perpetually curved, which I found constantly frustrating when trying to read it. After opening up the chips and questions, they will be hopelessly sloshed around the tube over time. After you open the game, it becomes impractical, and your best bet is to include the extra components in your main Wits and Wagers box. The two are intended to be played together, so this is a minor flaw, but one that won’t escape notice.

The biggest issue is that this game has a built in expiration date. The point of the game is not knowing answers, so you can only see each question once. Because there are only so many physical question cards, those who enjoy these games will get to a point where they can no longer play it. You only get through 7 questions per game, so getting to this point will be time consuming. North Star does sell extra question packs, but the fact remains that people who find the most enjoyment with this product will end up needing those supplements in order to play it. Especially for an expansion which is itself $49.99, it’s a legitimate consideration for anyone looking at this product.

With theme and class, Vegas Wits and Wagers brings new levels of depth to the core Wits and Wagers experience, adding flair and bluffing to the core game of wagering. That wagering has itself been supplemented, and while not everyone will engage most directly with the new rules they help the experience feel genuine.

John Farrell is a legal aid attorney specializing in domestic violence, living in West Chester Pennsylvania. You can listen to him travel the weird west as Carrie A. Nation in the Joker's Wild podcast at: https://jokerswildpodcast.weebly.com/
Related Articles: Tabletop, Vegas Wits and Wagers
Share
Tweet
Share
Submit