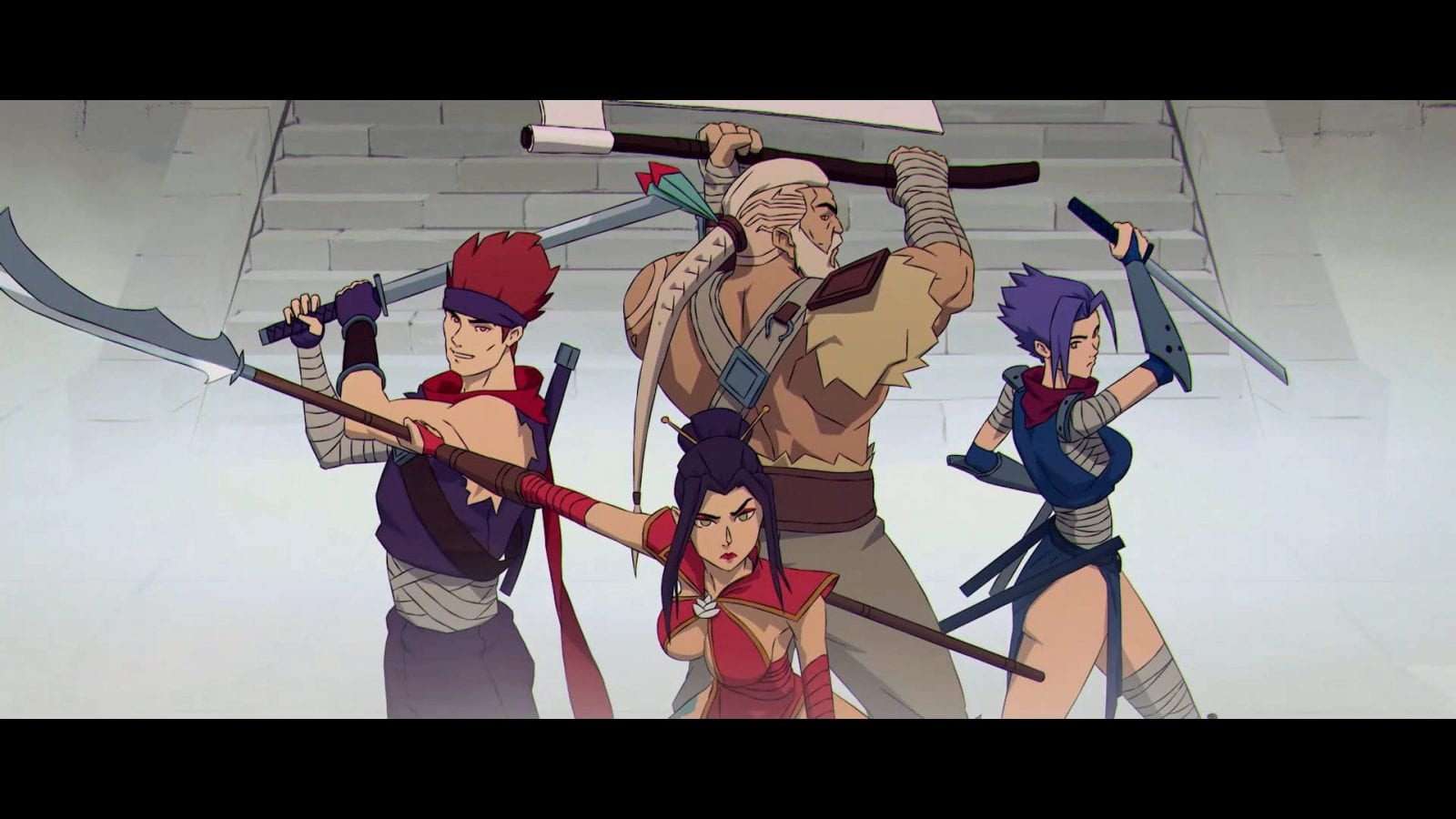 As I finished Shing! and thumped my controller on my desk in relief, I was bummed by how much potential developer Mass Creation forfeited because they ignored or didn’t consider the decades of beat ’em ups before it; or even recent successes like Streets of Rage 4. Most of the problems Shing! exhibits stem from missing essential beat ’em up mechanics. Individually, each issue isn’t much of a problem, but when those issues converge, they snowball into systemic problems.

In Shing!, there are no invincibility frames. Your body is always available for a beating. For example, one enemy spins like a top while chasing you down. My character was hit into the edge of the screen (the spinning enemy doesn’t chase you when you’re down but it was already on top of me when I was knocked down), and the three times I tried getting up I was immediately damaged, resulting in very low health. And you can’t get up when you want. Enemies back off when you’re down but when projectiles move slowly or enemies are in the middle of their attack, you’re helpless. This design doesn’t work. This isn’t a fighting game. Multiple enemies attack at the same time compared to 1v1 fights which makes this design choice incredibly daft.

It gets worse. You can switch between four characters on the battlefield, similarly to Battletoads, and when you press a direction on the d-pad to choose one, you might drop that character into an explosion. Or in my case, an enemy with a damaging bubble shield around him because you don’t have invincibility frames. You’re correct in thinking players should switch at an opportune time. But when a character dies, you drop the new character on top of the one that just died, and it’s not uncommon for enemies to hang around the inanimate body. In fact, I had no choice but to drop my character on Mr. Bubble Shield and take the damage just to keep moving forward.

Shing! also lacks adequate crowd-control mechanics. One of the methods to potentially deal with large mobs is called Momentum Attacks. Fill a yellow bar by landing attacks consecutively, push in the right stick and a directional prompt appears above your character’s head. Choose a direction and fury is unleashed in the form of a powerful strike or a set of slices beautifully choreographed. It’s a very useful mechanic that can connect with multiple enemies and drop helpful power-ups when you kill with it. And combined with those power-ups, it should be a strong momentum shift. But it can be interrupted – in two ways. One: if you’re hit by anything, your meter drops. And you’ll take plenty of damage because of a lack of invincibility frames. Two: Certain enemies can interrupt your Momentum Attack and those enemies become very common as you progress. That would make sense if Momentum Attacks were a one-hit KO. Since it’s not, I’d rather have a finisher. Or make the meter take a little longer to fill and make Momentum Attacks uninterruptible.

Then there’s parrying. Press the left bumper to defend, then release at the right time and you’ll perform a counter attack that differs between each character. One character dashes through multiple enemies with a gutsy slice. Another character batters her opponents with her long blade, sticks it in them, then aggressively plucks it out of their body. It feels so satisfying. Otherwise, parrying reflects everything else back at the enemy. It’s the best form of crowd-control but is limited by the fact that so many attacks come at you at once. You can’t parry them all. You’re better off using the dash to keep yourself alive. So you’re bound to take damage, which reduces your Momentum Attack meter, which leaves you open for more consecutive attacks because there’s no invincibility frames. That’s the snowball.

Ultimately, it seems Mass Creation expected to mitigate these issues with multiplayer. I wasn’t able to play with a partner but I imagine having two to three more people would make the journey far more tolerable even though each player would experience the same problems. 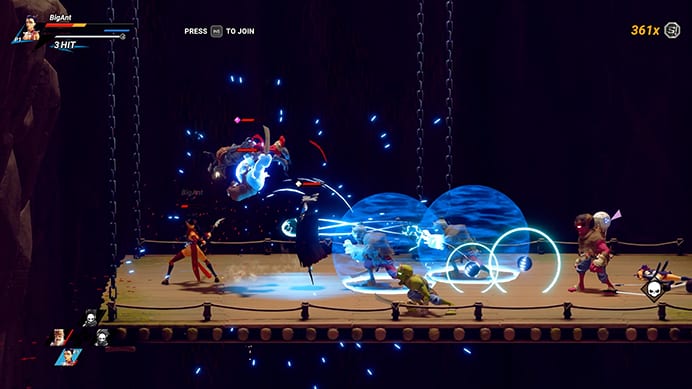 Now, these mechanics are exceptionally egregious but the decision to use the right thumbstick as the primary – and only – method of attack is inexcusable. Mass Creation calls it “intuitive.” It’s not. It’s inaccurate.

Imagine trying to target the legs of an enemy or aim high by flicking the right control stick down or up diagonally. It’s not consistent. They should have used Soul Calibur as their case study for weapon-based input styles. At the very least, give people the option to use buttons to attack. Plus, after a longer play session, my thumb joints hurt from all the fast flicking.

Attacking feels weak also. There’s no oomph to them. This is a beat ‘em up. Attacks should feel weighty. It feels like swiping through thick paper. Your offense amounts to flicking up for a launcher, flicking forward for frontal attacks, and performing circular motions to do spin attacks that look like various lightsaber spins. It feels like combat out of Tales of Symphonia even though it looks stylish. Even as banal as the combat is though, it’s fluid and that lends itself to easy engagement. Combat is fast, framerates are rock-solid on my rig (i7-9800X, RTX 2070, 32GB RAM), and the artwork has a mobile game aesthetic to it, but the colors pop and the animation work is impressive.

The rest of the game feels underdeveloped and adolescent. It looks like it’s set in Japan and while a couple of characters are training in their local dojo, Yokai, the antagonists, steal the Starseed – the source of stability for their land. It sounds like a perilous situation but the dialogue and gameplay hardly reflect that urgency. Characters don’t run to their next destination, they stroll. Challenges and “breaks” (Tales of Symphonia-like lore conversations) are planted in the middle of missions, interrupting the flow of the gameplay instead of having their own specific modes or placed in logical scene transitions. 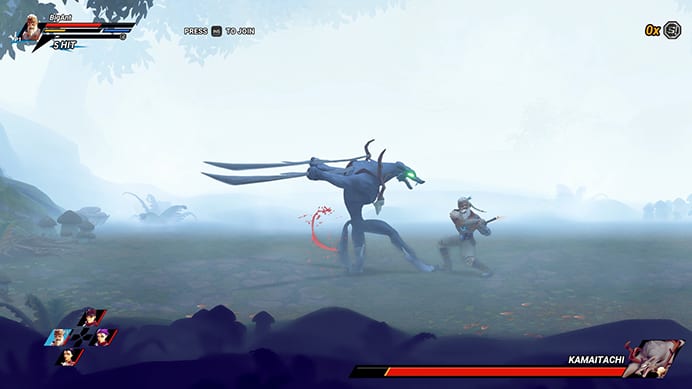 The amount of sarcasm and juvenile humor in every single conversation makes me wonder if Mass Creation was afraid of giving their audience something more substantial. I like Borderlands. I don’t mind a poop or sex joke. But they treat solemnity as a sin. They also put a lot of effort into boobs. Take that for what you will.

The characters have distinct personalities but they’re boiled down to drivel. An up-and-coming ninja from the mountains who takes nothing seriously and mostly responds with snark and sarcasm. The females are badass but obsessed with finding a mate. And an Irish warrior – how he fits into this I don’t know – who is older and frankly has the best writing between all the characters. Beat ‘em ups typically have throwaway stories and characters, Shing! is no exception, but this story could have had a legitimate shot at something with depth had Mass Creation given their audience a chance.

That’s how I feel about the entire game. Its mediocrity could have been avoided with more attention to detail and Shing! could have been among one of the best beat ‘em ups this generation. But we’re stuck with something too dull to take a bigger slice of that audience.

Shing! misses the mark of great beat 'em up by a long shot; which could have been avoided with more attention to detail. If Mass Creation put in the effort, it could have been one of the best beat 'em ups this generation. But we’re stuck with something too dull to take a bigger slice of that audience.