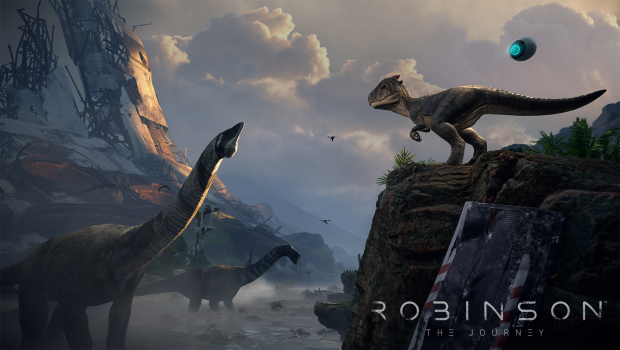 Robinson: the Journey lets you step into the shoes of a boy named Robin who, after surviving his spaceship crashing, has been surviving on a planet full of dinosaurs and other prehistoric creatures. Your only friends are a floating robot named HIGS, whose main goal is to keep you happy and healthy, and a T. rex you rescued as a baby named Laika. The game plunges you right into what is supposed to be a standard day for Robin. You play some hide and seek with Laika, fix up your shelter and look for food, but you quickly begin exploring your world in search of other HIGS units that hold information about why your ship suffered its unfortunate end.

Robinson: the Journey is simply beautiful. I spent about half my time playing the game just looking at the amazing scenery and wonderful creatures. I found myself taking a lot more screenshots and videos than I ever have with any game before. The game felt so much like a ride at Disneyland; I just wanted to sit back, enjoy the ride, and experience my surroundings. Every time you turn a corner, there is something interesting to look at, whether it be a tar worm popping its head above the surface or a waterfall on the side of a cliff. You can clearly see that a lot of thought was put into the way this game looks and that Crytek really wanted to show off what can be achieved with its Cryengine and the PSVR.

Wreckage of a spaceship

Where the game stumbles is in how you actually progress through it. It wants you to complete puzzles without telling you where to go or what you need to do. I found myself not knowing what my goal was more than a few times and, while I am not opposed to a challenging puzzler that doesn’t hold your hand, it felt more like this was a way of lengthening the game rather than adding enjoyable content. There were multiple points in the game where I was led in a direction that was completely wrong for no reason and ended up having to backtrack, which was very frustrating. The game could have been much better with a wider range of puzzles rather than the same climbing objectives followed by moving some wreckage over and over again. While I actually enjoyed the climbing mechanic, after the hundredth time it lost most of its allure.

With VR games, the way that controls are laid out and how they work is more important than with a standard game because bad movement controls can cause motion sickness really quickly. While I experienced slight motion sickness in the first five minutes of the game, the feeling subsided and I didn’t have any problem playing for long periods. I think this is due to great use of control mechanics. Robin’s speed is quite slow but that’s fine because, from my experience, speed and VR don’t mix all that well, and I would rather have it take a little longer to get to places than have to take breaks constantly to avoid getting sick. I do feel that the game would have benefited from the use of the PS Move controllers especially during the climbing sections, which take a large amount of time to complete and an alternative control scheme would have fit perfectly for them. The standard PS4 controllers work well enough that I never really felt like the game suffered from any unnatural or bad controls, you would just look at what you wanted to grab and click either the left or right trigger for either hand respectively. That said, It could have been a lot more immersive if the Move controllers were utilized and you were allowed to actually reach out and grab on to what you were climbing.

The story of the game is actually a pretty good concept. Who doesn’t love dinosaurs, space and survival stories? However, it feels like the game ends right as the story really picks up. The whole game seems more like a teaser for an upcoming game rather than a full-length title. Sure, its length is long enough to be worthwhile, but that’s mostly due to confusion about what you are doing and the speed that Robin walks.

The game’s story does have a conclusion, and it’s not the worst I’ve seen. It ties up the story in a satisfying and well-executed way. The climbing gets harder near the end, the danger in your surrounding becomes a much bigger factor, and you get a lot of answers about what happen to your spaceship, which are all good things. The problem with the end is that, after being stuck on a puzzle for a half hour to get to it, I had become less invested in the story and was really just waiting for it to be over. When looking at the story as a whole there really isn’t much to it, you essentially go to three or four places, learn some information in each section, and then reach the conclusion. It is a real shame that Crytek didn’t take the time to flesh out a fuller story and add some more gameplay to this incredible looking game.

While Robinson: the Journey looks great and has a decent conclusion, it seems like Crytek didn’t put any of its time into any other aspects of the game. It suffers immensely from repetitive gameplay, a short story and confusing puzzles. While I would definitely recommend that you experience this amazing world, the rest of the game doesn't really make enough of a mark to justify its high selling price.

Zach has been a gamer ever since he picked up a PS1 controller and played Asteroids for the first time. From FPS games to Point-and-click adventures, Zach knows no genre that he can't get into. When not playing games, he spends his time looking at the newest computer components on the market and dreaming of a day when he can buy them.
Related Articles: Robinson: The Journey
Share
Tweet
Share
Submit